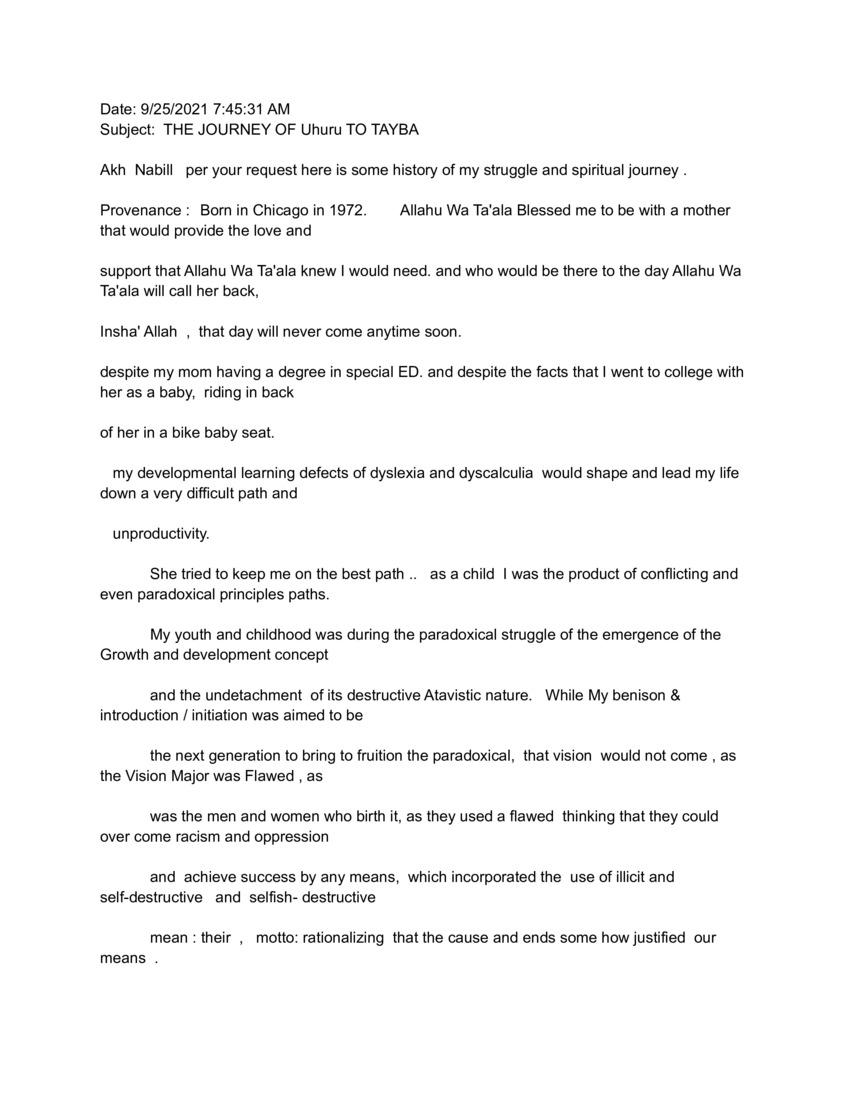 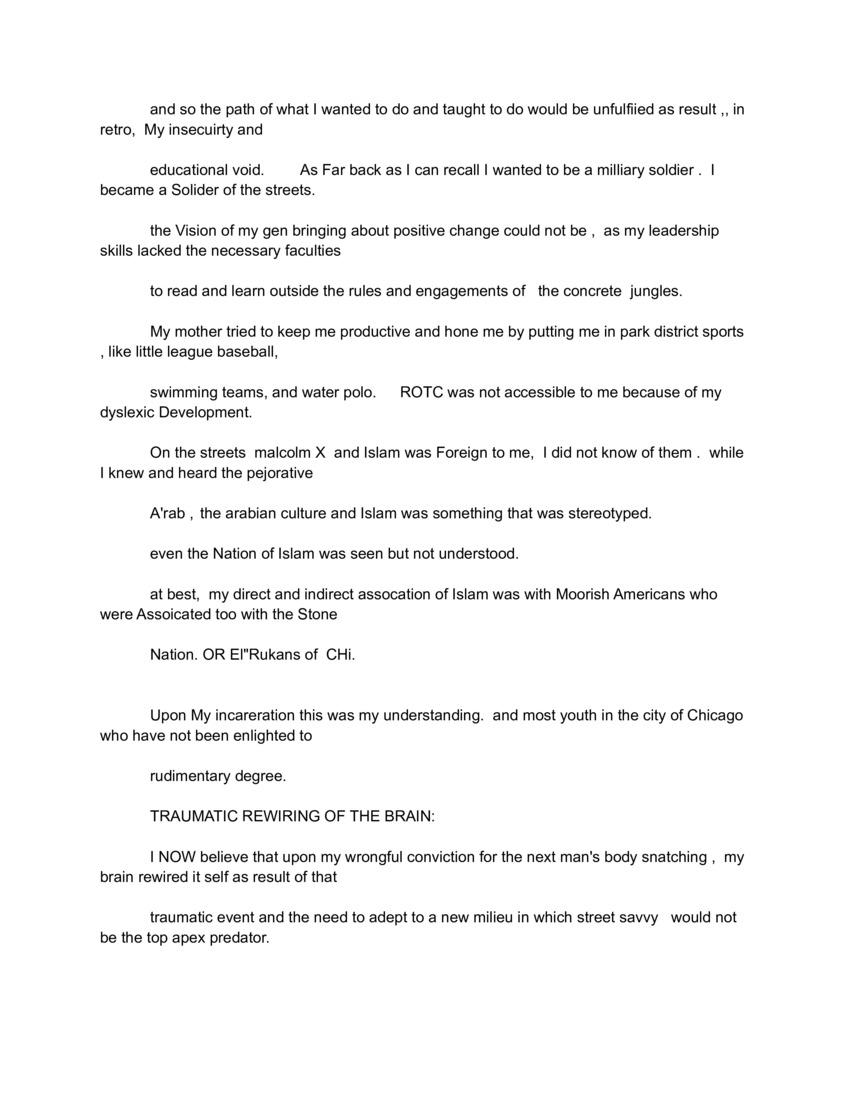 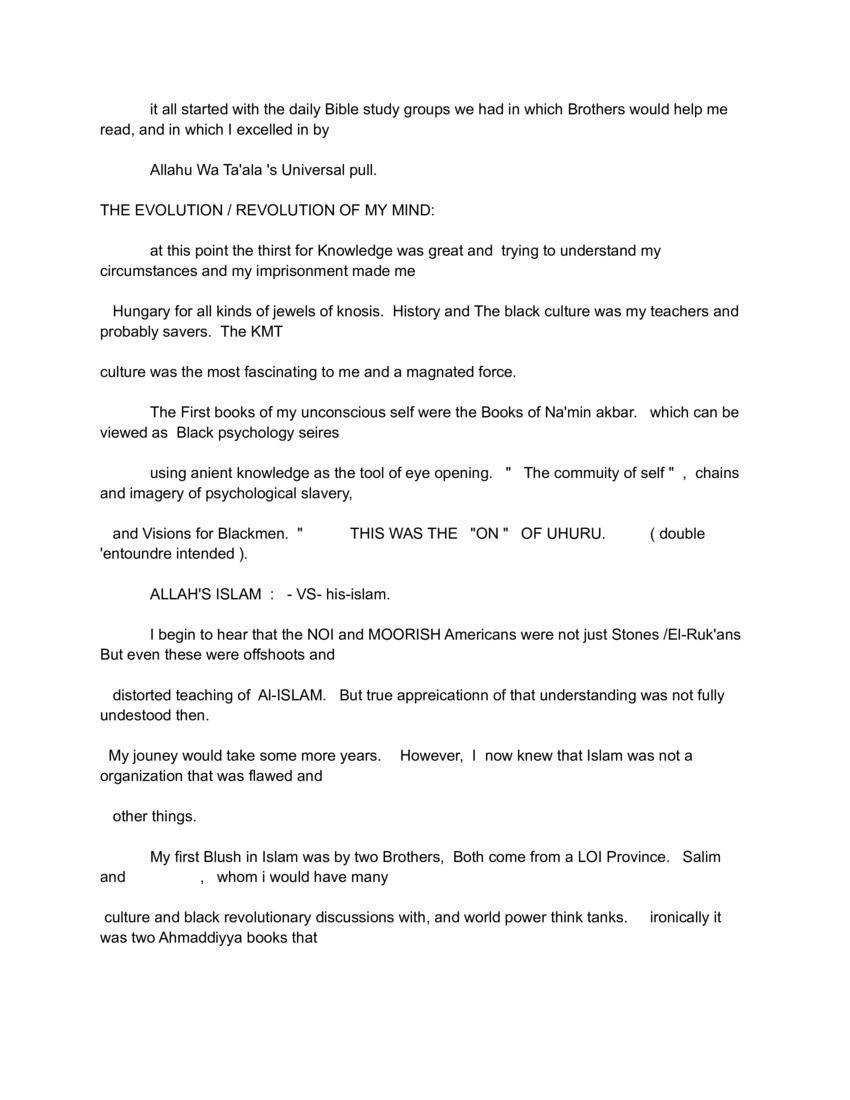 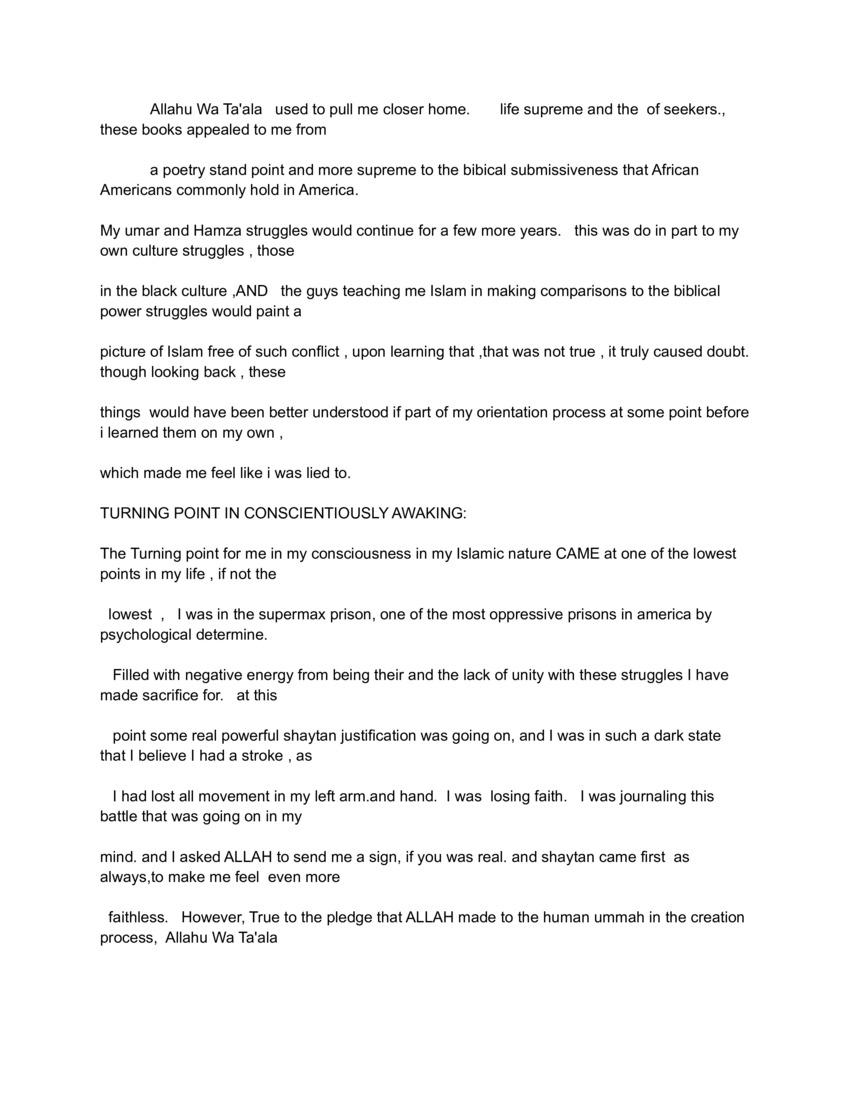 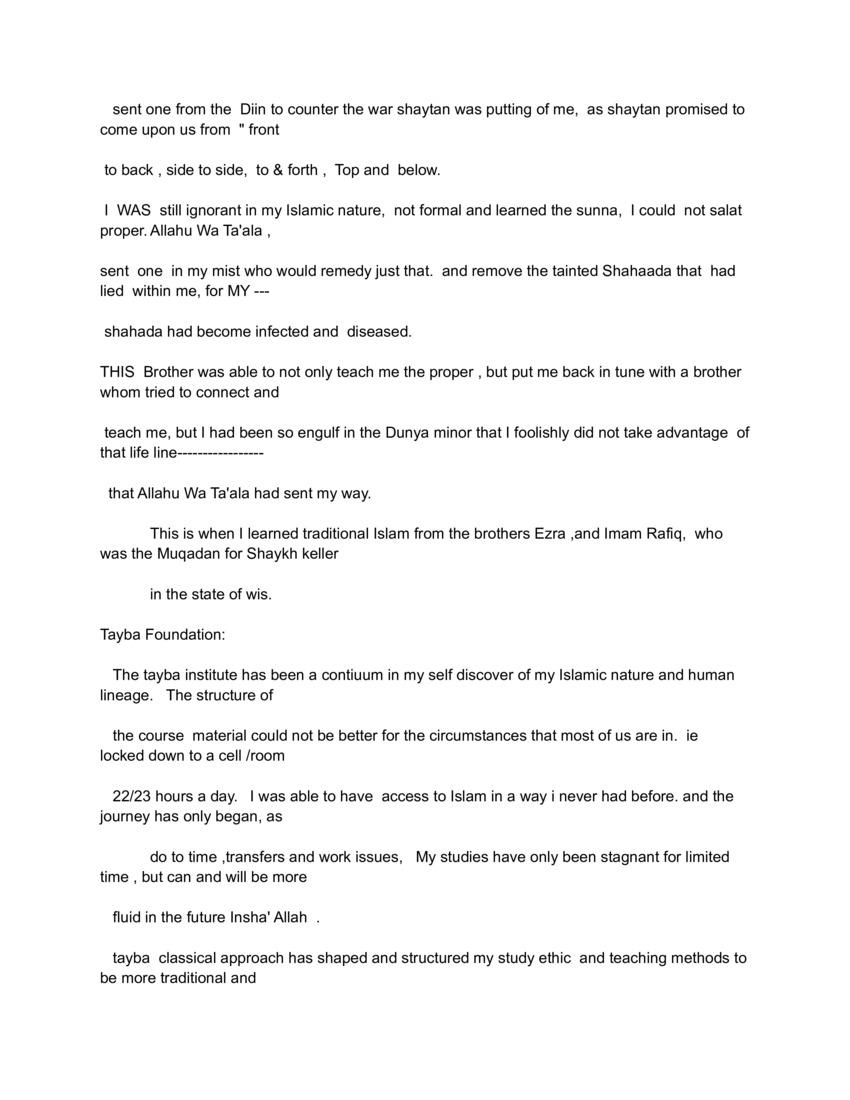 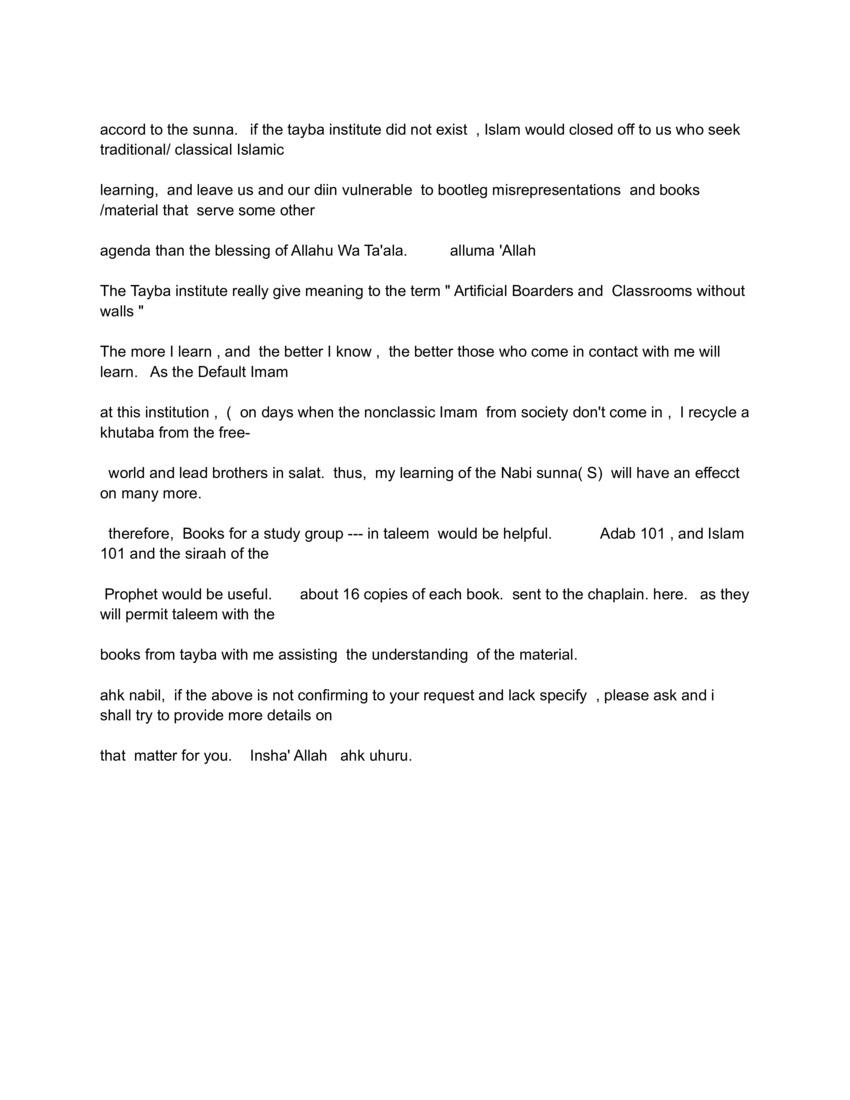 Akh Nabill per your request here is some history of my struggle and spiritual journey.

Provenance: Born in Chicago in 1972. Allahu Wa Ta'ala Blessed me to be with a mother that would provide the love and support that Allahu Wa Ta'ala knew I would need. And who would be there to the day Allahu Wa Ta'ala call her back, Insha' Allah, that day will never come anytime soon. Despite my mom having a degree in special ED and despite the facts that I went to college with her asa baby, riding in back of her in a bike baby seat. My developmental learning defects of dyslexia and dyscalculia would shape and lead my life down a very difficult path and unproductivity. She tried to keep me on the best path... as a child I was the product of confliction and even paradoxical principles paths. My youth and childhood was during the paradoxical struggle of the emergence of the Growth and development concept and the detachment of its destructive Atavistic nature. While my benison & introduction / initiation was aimed to be the next generation to bring the fruition the paradoxical, that vision would not come, as the Vision Major was Flawed, as was the men and women who birth it, as they used a flawed thinking that they could over come racism and oppression and achieve success by any means, which incorporated the use of illicit and self-destructive and selfish-destructive mean: their moto: rationalizing that the new cause and ends some how justified out means.

and so the path of what I wanted to do and taught to do would be unfulfilled as a result, retro, my insecurity and educational void. As far back as I can recall I wanted to be a military soldier. I became a soldier of the streets. The vision of my gen bringing about positive change could not be, as my leadership skills lacked the necessary faculties to read and learn outside the rules and engagements of the concrete jungles. My mother tried to keep my productive and hone me by putting me in park district sports, like little league baseball, swimming teams, and water polo. ROTC was not accessible to me because of my dyslexic development. On the streets Malcolm X and Islam was Foreign to me, I didn't know of them. While I knew and heard the pejorative A'rab, the Arabian culture and Islam was something that was stereotyped. Even the nation of Islam was seen but not understood. At best, my direct and indirect association of Islam was with Moorish Americans who were Associated too with the Stone Nation. OR El'Rukans of CHi. Upon my incarceration this was my understanding. Most youth in the city of Chicago who have not be enlightened to rudimentary degree. TRAUMATIC REWIRING OF THE BRAIN: I NOW believe that upon my wrongful conviction for the next man's body snatching, my brain rewired it self as result of that traumatic event and the need to adapt to a new milieu in which street savvy would not be the top apex predator.

It all started with the daily Bible study groups we had in which Brothers would help me read, and in which I excelled in by Allahu Wa Ta'ala's Universal pull.

THE EVOLUTION / REVOLUTION OF MY MIND:

At this point the thirst for Knowledge was great and trying to understand my circumstances and my imprisonment made me hungry for all kinds of jewels and knosis. History and the black culture was my teachers and probably savers. The KMT culture was the most fascinating to me and a magnetic force. The First books of my unconscious self were the Books of Na'min akbar which can be viewed as black psychology series using ancient knowledge as the tool of eye opening. "The community of self", chains and imagery of psychological slavery, and visions for Blackmen. "THIS WAS THE 'ON' OF UHURU. (double 'entoundre intended).

I begin to hear that the NOI and MOORISH Americans were not just Stones/El-Ruk'ans but even these were offshoots and distorted teaching of AI-ISLAM. But true appreciation of that understanding was not fully understood then. My journey would take some more years. However, I now knew that Islam was not an organization that was flawed and other things. My first blush in Islam was by two brothers, both some from a LOI Province. Salim and whom I would have many culture and black revolutionary discussions with, and world power thinks tanks. Ironically it was two Ahmaddiyya books that

Alllahu Wa Ta'ala used to pull me closer home. Life supreme and the of seekers, these books appealed to me from a poetry stand point and more supreme to the biblical submissiveness that African Americans commonly hold in America. My umar and Hamza struggles would continue for a few more years. This was do in part to my own culture struggles, those in the black culture, AND the guys teaching me Islam in making comparisons to the biblical power struggles would paint a picture of Islam free of such conflict, upon learning that, that was not true, it truly caused doubt. Though looking back, these things about have been better understood if part of my orientation process at some point before I learned them on my own, which made me feel like I was lied to.

The turning point for me in my consciousness in my Islamic nature CAME at one of the lowest points in my life, if not the lowest, I was in the supermax prison, one of the most oppressive prisons in America by psychological determine. Filled with negative energy from being their and the lack of unity with these struggles I have made sacrifice for. At this point some real powerful shaytan justification was going on, and I was in such a dark state that I believe I had a stroke as I had lost all movement in my left arm and hand. I was losing faith. I was journaling this battle that was going on in my mind. And I asked ALLAH to send me a sign, if you was real. And Shaytan came first as always to make me feel even more faithless. However, true to the pledge that ALLAH made to the human ummah in the creation process, Allahu Wa Ta'ala

sent one from the Diin to counter the war shaytan was putting of me, as shaytan promised to come upon us from "front to back, side to side, to & forth, top and below." I WAS still ignorant in my Islamic nature, not formal and learned the sunna, I could not salat proper. Allahu Wa Ta'ala, sent one in my mist who would remedy just that. And remove the tainted Shahada that had lied within me, for MY -- shahada had become infected and diseased. THIS Brother was able to not only teach me the proper, but put me back in tune with a brother whom tried to connect and teach me, but I had been so engulf in the Dunya minor that I foolishly did not take advantage of that life line ------------- that Allahu Wa Ta'ala had sent my way. This is when I learned traditional Islam from the brothers Ezra and Imam Refiq, who was the Muqadan for Shaykh Keller in the state of wise.

The tayba institution has been a continuum in my self discover of my Islamic nature and human lineage. The structure of the course material could not be better for the circumstances that most of us are in i.e. lockdown to a cell/room 22/23 hours a day. I was able to have access to Islam in a way I never had before. And the journey has only began as do to time, transfers and work issues. My studies have only been stagnant for limited time, but can and will be more fluid in the future Insha' Allah. Tayba classical approach has shaped and structured my study ethic and teaching methods to be more traditional and

accord to the sunna. If the tayba institute did not exist, Islam would closed off to us who seek traditional/classical Islamic learning, and leave us and our diin vulnerable to bootleg misrepresentations and books/materials that serve some other agenda than the blessing of Allahu Wa Ta'ala. Alluma 'Allah. The Tayba institute really give meaning to the term "Artificial Boarders and Classrooms without walls". The more I learn, and the better I know, the better those who come in contact with me will learn. As the Default Imam at this institution, (on days when the nonclassic Imam from society don't come in, I recycle a khutaba from the free-world and lead brothers in salat. Thus, my learning of the Nabi sunna(S) will have an effect on many more. Therefore, books for a study group -- in taleem would be helpful. Adab 101, and Islam 101 and the siraah of the Prophet would be useful. About 16 copies of each book. Sent to the chaplain. Here. As thy will permit taleem with the books from tayba with me assisting the understanding of the material. Ahk nabil, if the above is not confirming to your request and lack specify, please ask and I shall try to provide more details on that matter for you. Insha'Allah ahk uhuru.