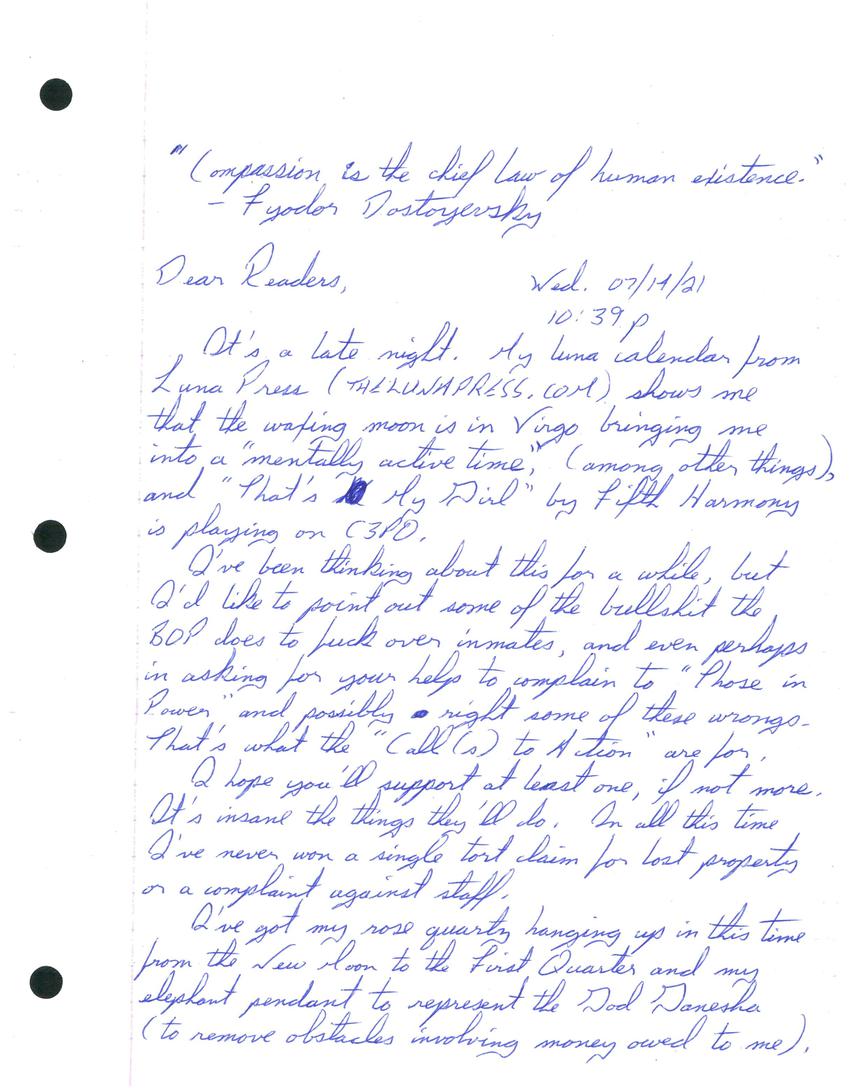 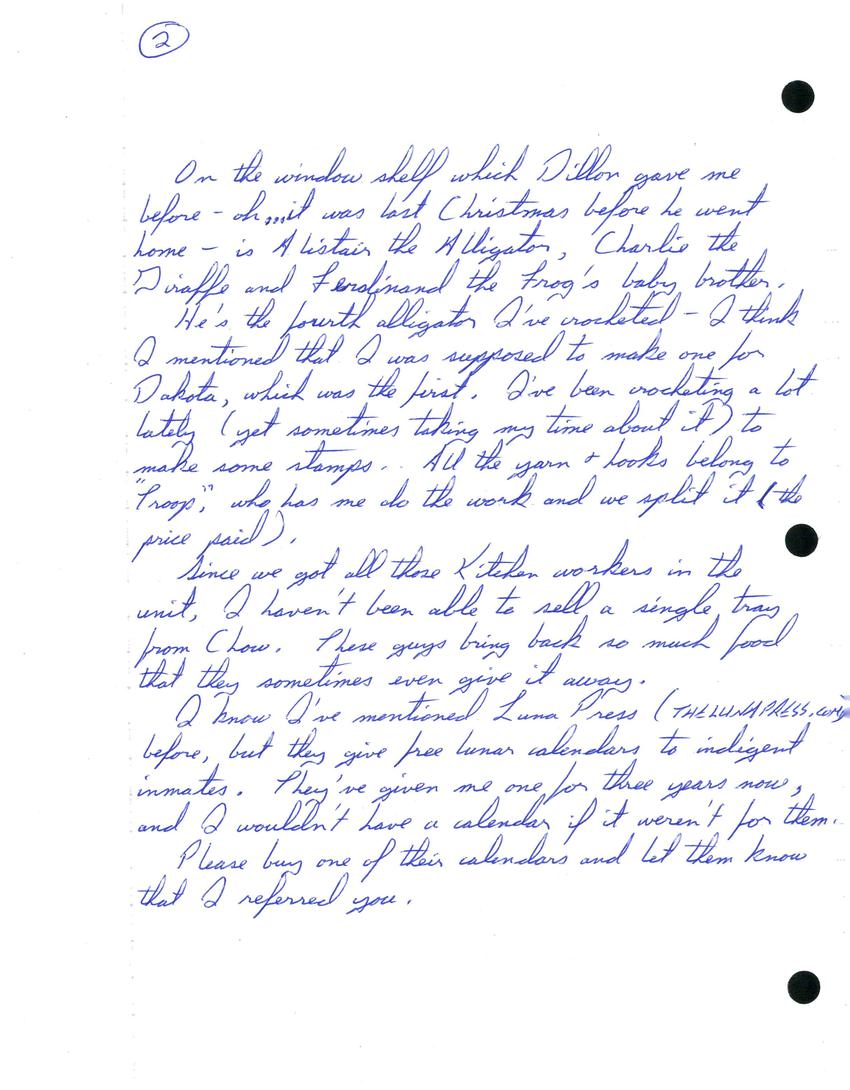 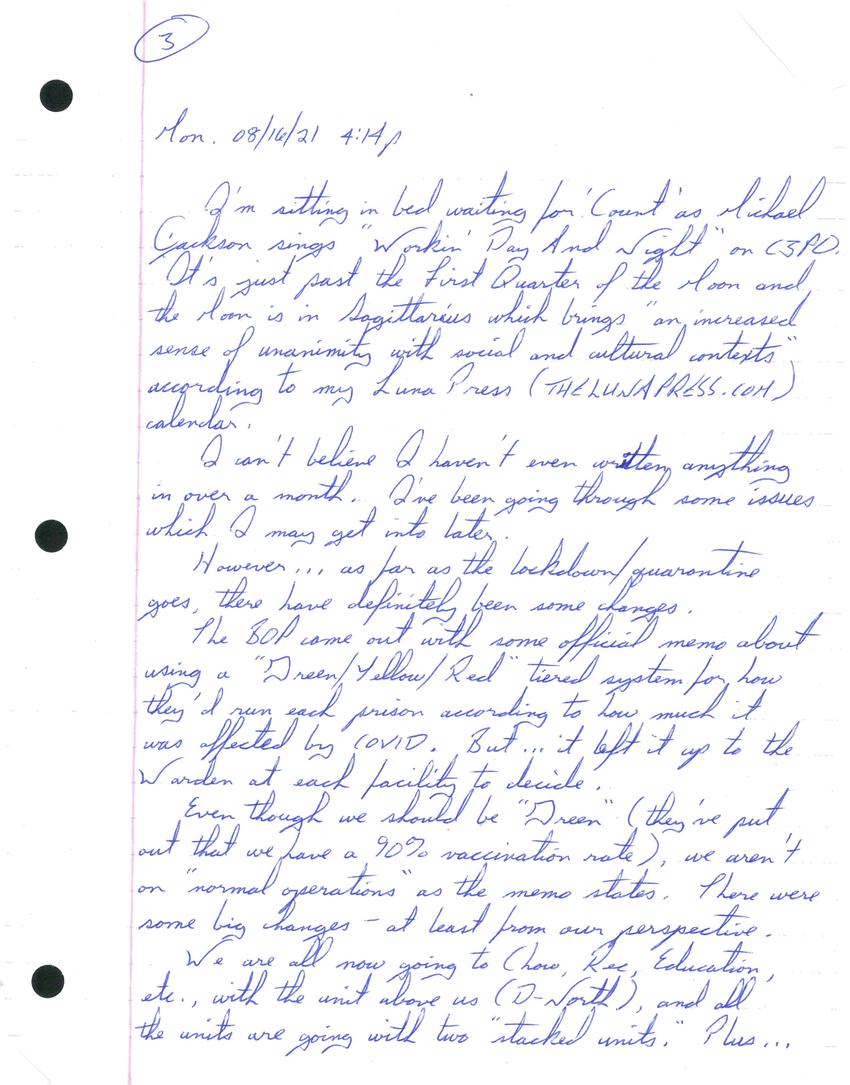 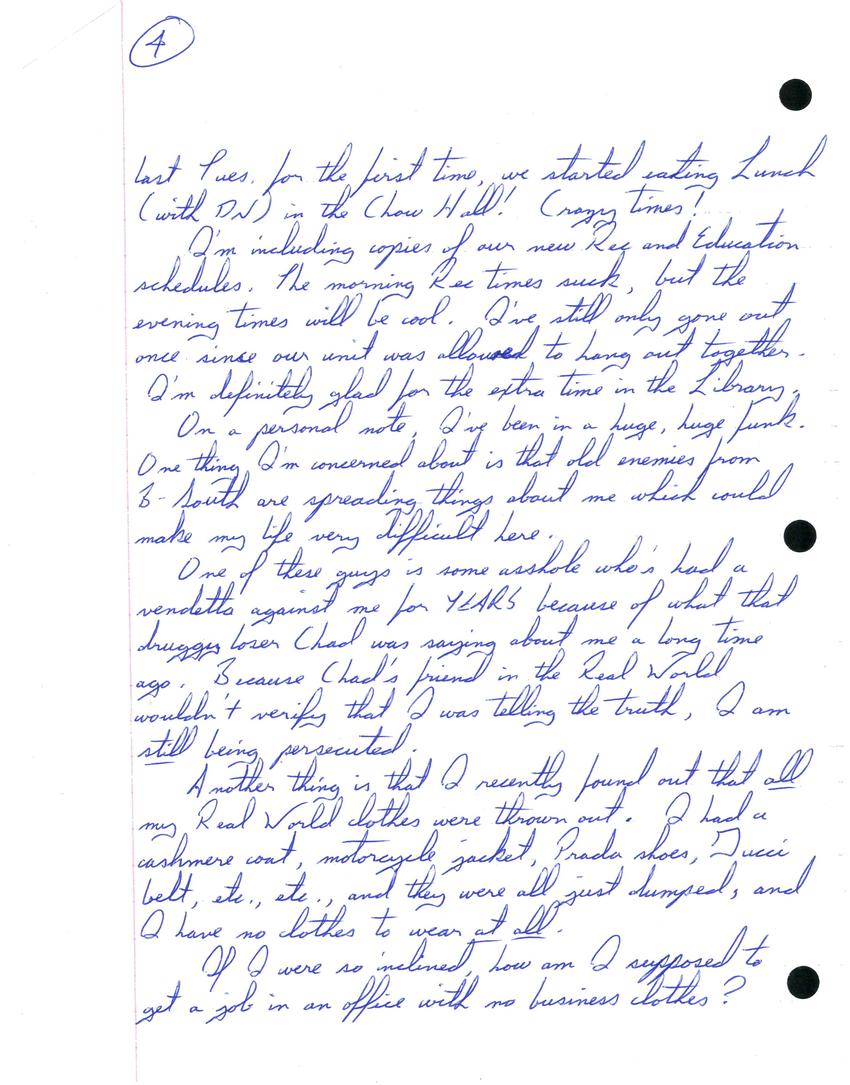 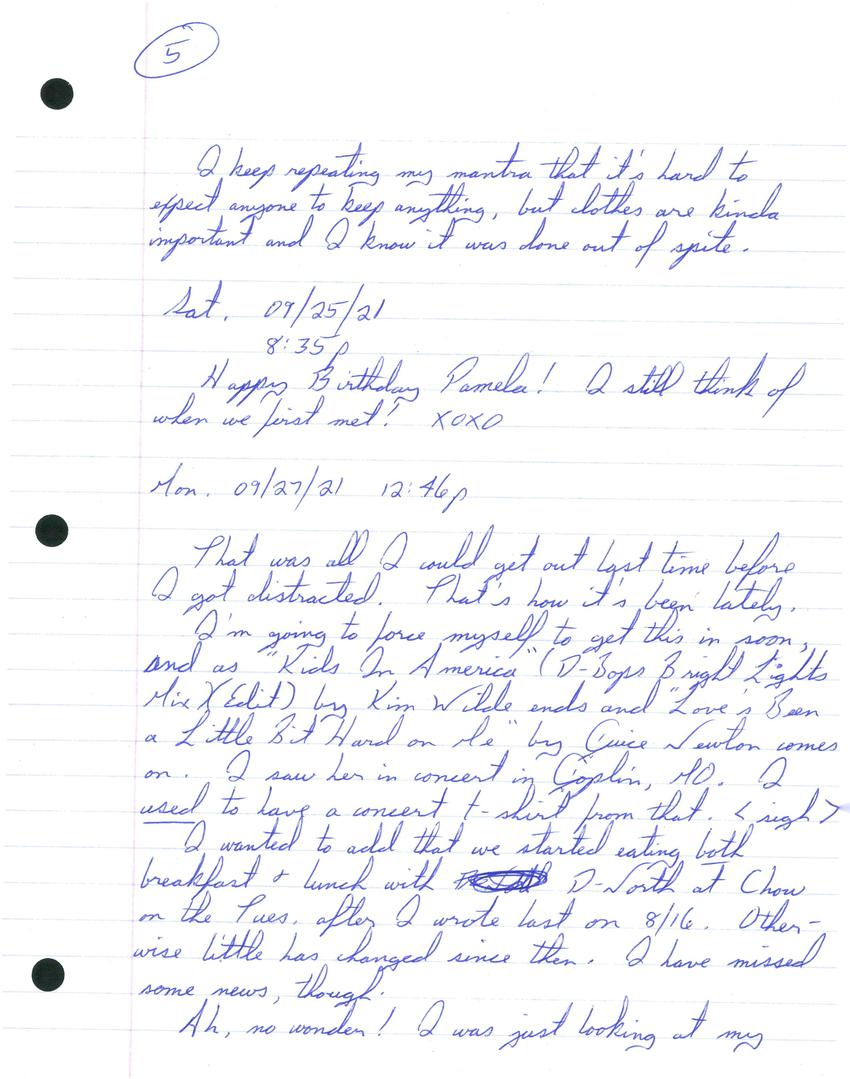 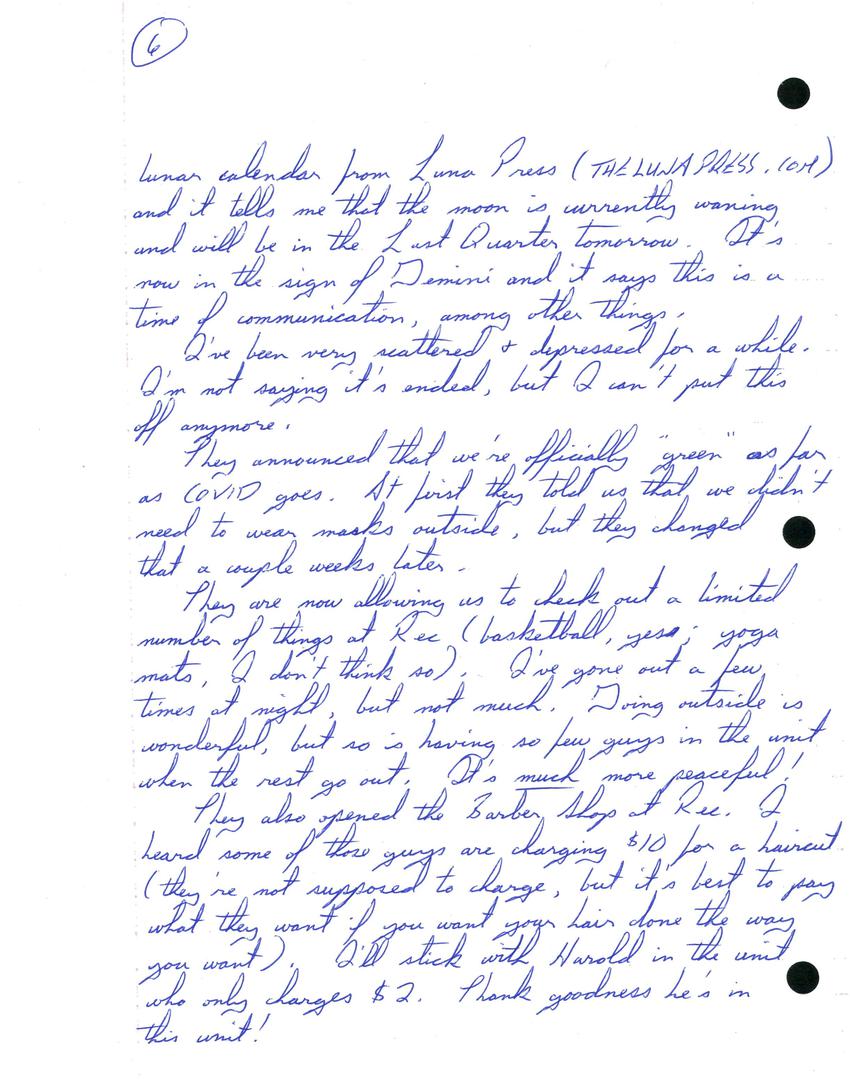 "Compassion is the chief law of human existence." -Fyodor Dostoevsky

It's a late night. My luna calendar from Luna Press (THELUNAPRESS.COM) shows me that the waxing moon is in Virgo bringing me into a "mentally active time," (among other things), and "That's My Girl" by Fifth Harmony is playing on C3PO.
I've been thinking about this for a while, but I'd like to point out some of the bullshit the BOP does to fuck over inmates, and even perhaps in asking for your help to complain to "Those in Power," and possibly right some of these wrongs. That's what the "Call(s) to Action" are for.
I hope you'll support at least one, if not more. It's insane the things they'll do. In all this time I've never worn a single tort claim for lost property or a complaint against staff.
I've got my rose quartz hanging up this time from the New Room to the first Quarter and my elephant pendant to represent the God Ganesha (to remove obstacles involving money owed to me).
On the window shelf which Dillon gave me before - oh.. it was last Christmas before he went home - is Alistair the Alligator, Charlie the Giraffe and Ferdinand the Frog's baby brother.
He's the fourth alligator I've crocheted - I think I mentioned that I was supposed to make one for Dakota, which was the first. I've been crocheting a lot lately (yet sometimes taking my time about it) to make some stamps. All the yarn + hooks before to "Troop," who has me do the work and we split it (the price paid).
Since we got all the kitchen workers in the unit, I haven't been able to sell a single tray from Chow. These guys bring back so much food that they sometimes even give it away.
I know I've mentioned Luna Press (THELUNAPRESS.com) before, but they give free lunar calendars to indigent inmates. They've given me one for three years now, and I wouldn't have a calendar if it weren't for them. Please buy one of their calendars and let them know that I referred you.

I'm sitting in bed waiting for 'Count' as Michael Jackson sings "Workin' Day And Night" on C3PO. It's just past the First Quarter of the moon and the moon is in Sagittarius which brings "an increased sense of unanimity with social and cultural contexts" according to my Luna Press (THELUNAPRESS.COM) calendar.
I can't believe I haven't even written anything in over a month. I've been going through some issues which I may get into later.
However...as far as the lockdown/quarantine goes, there have definitely been some changes.
The BOP come out with some official memo about using a "Green/Yellow/Red" tiered system for how they'd run each prison according to how much it was affected by COVID. But...it left it up to the Warden at each facility to decide.
Even though we should be "Green" (they've put out that we have a 90% vaccination rate), we aren't on "normal operations" as the memo states. There were some big changes - at least from our perspective.
We are all now going to Chow, Rec, Education, etc., with the unit above us (D-North), and all the units are going with two "stacked units." Plus...last Tues. for the first time, we started eating Lunch (with DN) in the Chow Hall! Crazy times!
I'm including copies of our new Rec and Education schedules. The morning Rec times suck, but the evening times will be cool. I've still only gone about once since our unit was allowed to hang out together. I'm definitely glad for the extra time in the Library.
On a personal note, I've been in a huge, huge funk. One thing I'm concerned about is that old enemies from B-South are spreading things about me which could make my life very difficult here.
One of these guys is some asshole who's had a vendetta against me for YEARS because what that druggy Chad was saying about me a long time ago. Because Chad's friend in the Real World wouldn't verify that I was telling the truth, I am still being persecuted.
Another thing is that I recently found out that all my Real World clothes were thrown out. I had a cashmere coat, motorcycle jacket, Prada shoes, Gucci belt, etc. etc., and they were all just dumped, and I have no clothes to wear at all.
If I were so inclined, how am I supposed to get a job in an office with no business clothes?
I keep repeating my mantra that it's hard to expect anyone to keep anything, but clothes are kinda important and I know it was done out of spite.

That was all I could get out last time before I got distracted. That's how it's been lately.
I'm going to force myself to get this in soon, as "Kids in America" (D-Bop's Bright Lights Mix)(Edit) by Kim Wilde ends and "Love's Been a Little Bit Hard on Me" by Juice Newton comes on. I saw her in concert in Joplin, MO. I used to have a concert t-shirt from that. <sigh>
I wanted to add that we started eating both breakfast + lunch with D-North at Chow on the Tues. after I wrote last on 8/16. Otherwise little has changed since then. I have missed some news, though.
Ah, no wonder! I was just looking at my lunar calendar from Luna Press (THELUNAPRESS.COM) and it tells me that the moon is currently waning and will be in the Last Quarter tomorrow. It's now in the sign of Gemini and it says this is a time of communication, among other things.
I've been very scattered + depressed for a while. I'm not saying it's ended, but I can't put this off anymore.
They announced that we're officially "green" as far as COVID goes. At first they told us that we didn't need to wear masks outside, but they changed that a couple weeks later.
They are now allowing us to check out a limited number of things at Rec (basketball, yes; yoga mats, I don't think so). I've gone out a few times at night, but not much. Going outside is wonderful, but so is having so few guys in the unit when the rest go out. It's much more peaceful!
They also opened the Barber Shop at Rec. I heard some of the guys are charging $10 for a haircut (they're not supposed to charge, but it's best to pay what they want if you want your hair done the way you want). I'll stick with Harold in the unit who only charges $2. Thank goodness he's in this unit!
They're starting to get serious about making this a "work unit" only. They've recently started moving guys out who don't have real jobs - which could mean me.
They tried to move 4-5 guys out last week to A-South, but the guys there quit their jobs rather than move. I heard they got "slots" for it.
I spoke to a staff member in Education today about getting a tutoring job there (gasp!). I really don't want tot work for these people, but I also don't want to move. I won't work in the Kitchen so Education seems like a lesser evil.
I'm supposed to meet with him on Fri. for a class "audition." I'm not worried about t. There are others trying to the job, so who knows? I just don't want to move units again.
Until next time, I wish you...
Love + Blessings,
[Signature]

I'm especially sorry to hear about the loss of your clothes. As a fellow fan of fashion, I understand how much one's wardrobe can become a part of them, so I hope you're able to one day amass another collection that speaks to who you are just as much.
(scanned reply – view as blog post)
uploaded Jan. 9, 2022.  Original (PDF) 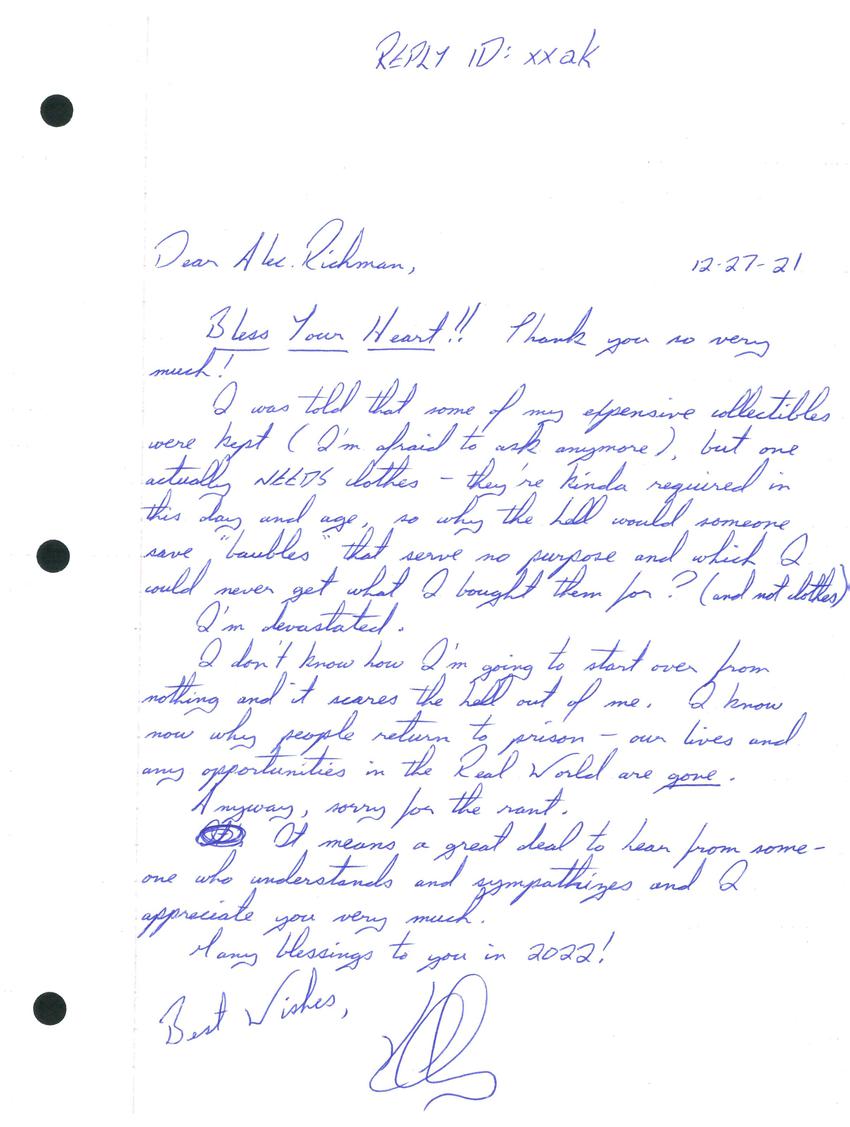