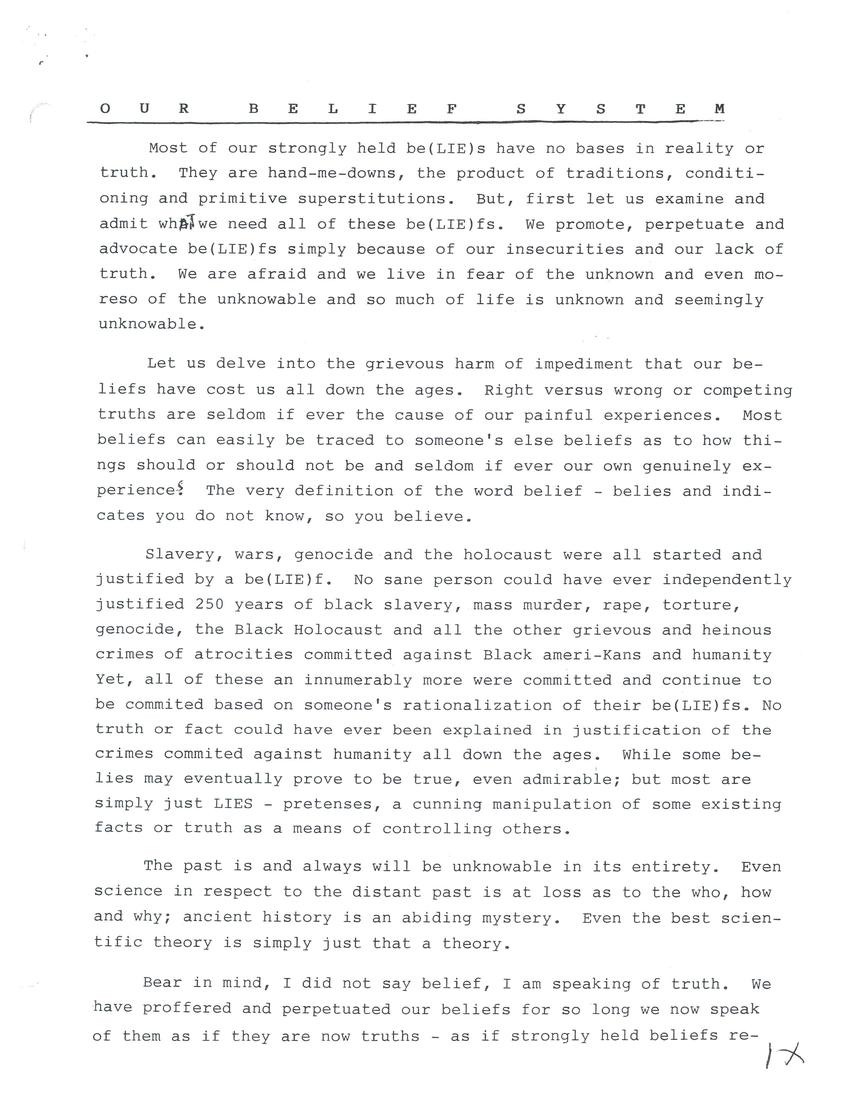 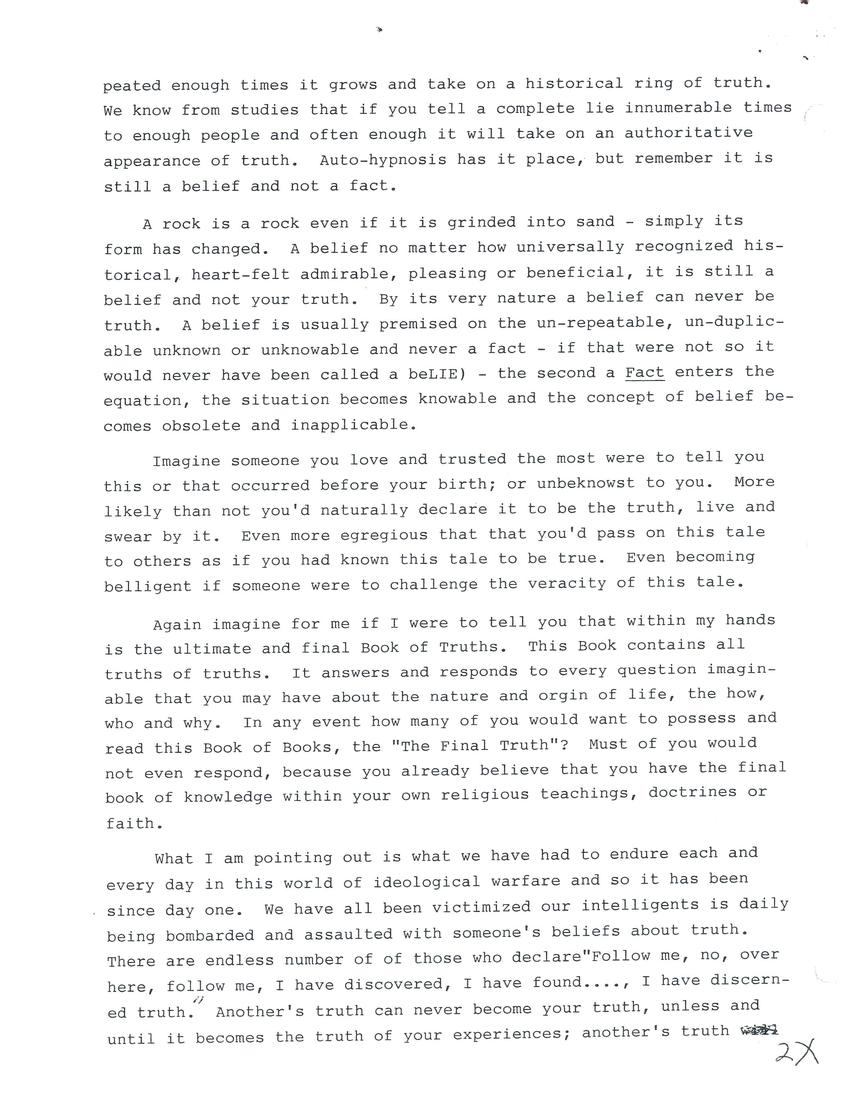 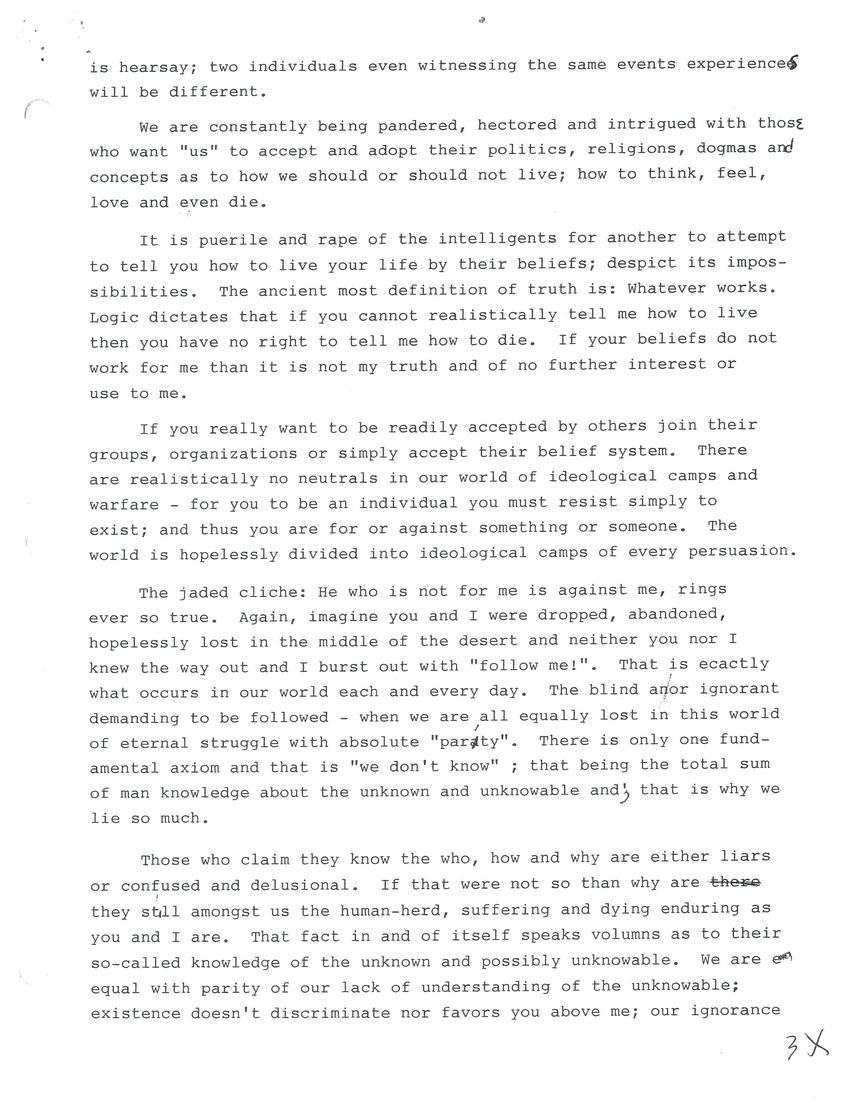 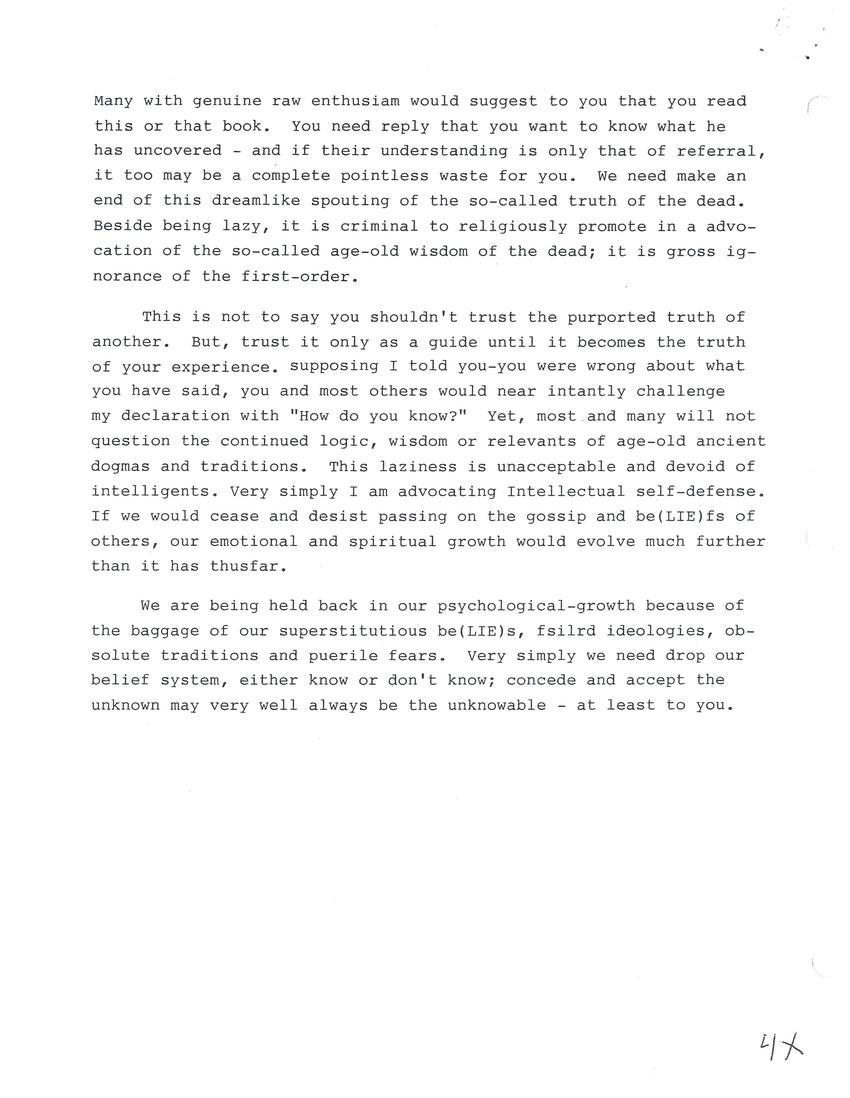 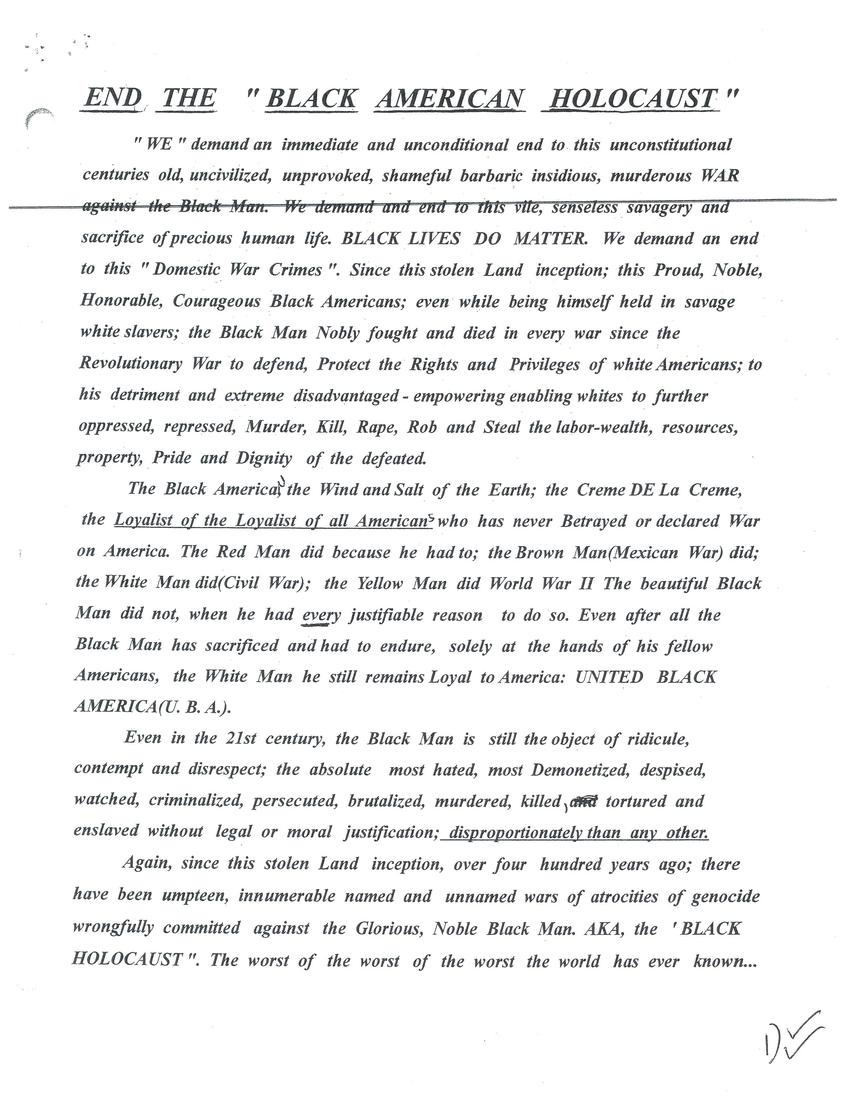 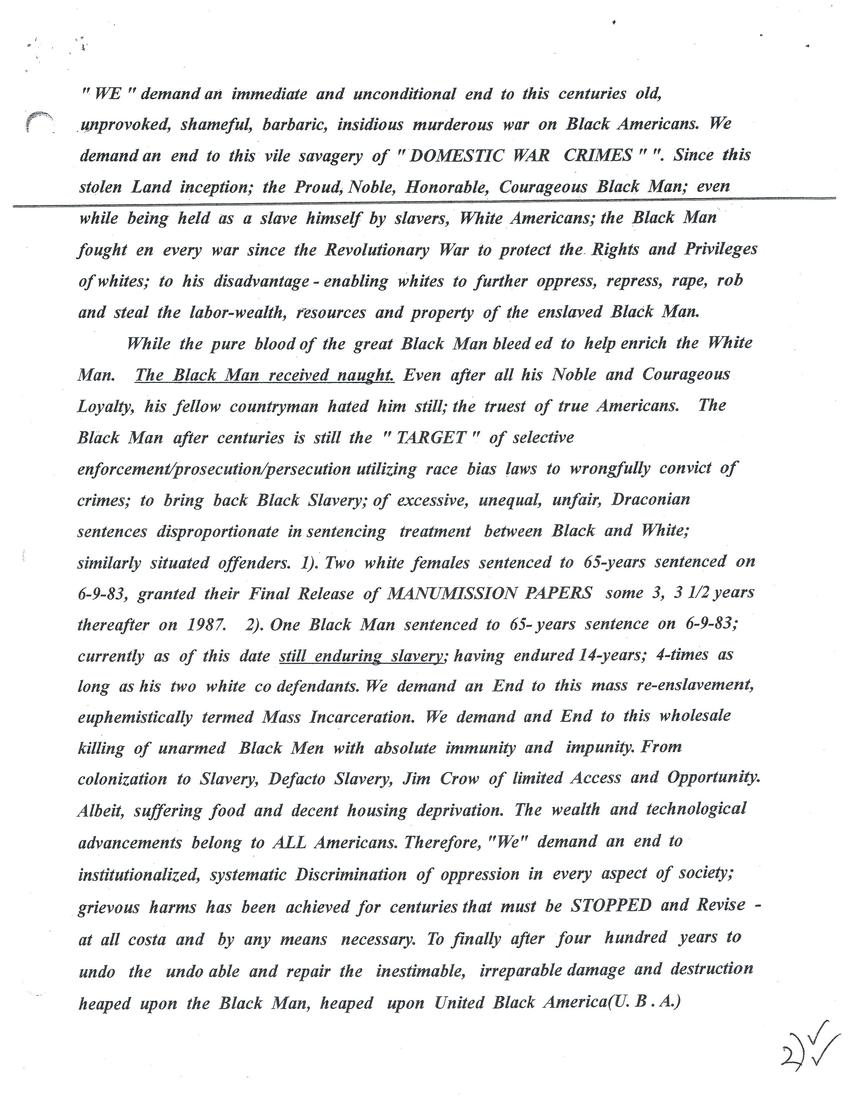 OUR BELIEF SYSTEM
Most of our strongly held be(LIE)s have no bases in reality or truth. They are hand-me-downs, the product of traditions, conditi-
oning and primitive superstitions. But, first let us examine and
admit whAT we need all of these be(LIE)fs. We promote, perpetuate and
advocate be(LIE)fs simply because of our insecurities and our lack of
truth. We are afraid and we live in fear of the unknown and even mo-
reso of the unknowable and so much of life is unknown and seemingly
unknowable.

Let us delve into the grievous harm of impediment that our be-
liefs have cost us all down the ages. Right versus wrong or competing
truths are seldom if ever the cause of our painful experiences. Most
beliefs can easily be traced to someone's else beliefs as to how thi-
ngs should or should not be and seldom if ever our own genuinely ex-
perience^s. The very definition of the word belief - belies and indi-
actes you do not know, so you believe.

Slavery, wars, genocide and the holocaust were all started and
justified by a be(LIE)f. No sane person could have ever independently
justified 250 years of black slavery, mass murder, rape, torture,
genocide, the Black Holocaust and all the other grievous and heinous
crimes of atrocities committed against Black ameri-Kans and humanity
Yet, all of these an innumerably more were committed and continue to
be committed based on someone's rationalization of their be(LIE)fs. No
truth or fact could have ever been explained in justification of the
crimes commited against humanity all down the ages. While some be-
lies may eventually prove to be true, even admirable; but most are
simply just LIES - pretenses, a cunning manipulation of some existing
facts or truth as a means of controlling others.

The past is and always will be unknowable in its entirety. Even
science in respect to the distant past is at loss as to the who, how
and why; ancient history is an abiding mystery. Even the best scein-
tific theory is simply just that a theory.

Bear in mind, I did not say belief, I am speaking of truth. We
have proffered and perpetuated our beliefs for so long we now speak
of them as if they are now truths - as if strongly held beliefs re-

peated enough times it grows and take on a historical ring of truth.
We know from studies that if you tell a complete lie innumerable times
to enough people and often enough it will take on an authoritative
appearance of truth. Auto-hypnosis has it place, but remember it is
still a belief and not a fact.

A rock is a rock even if it is grinded into sand - simply its
form has changed. A belief no matter how universally recognized his-
torical, heart-felt admirable, pleasing or beneficial, it is still a
belief and not your truth. By its very nature a belief can never be
truth. A belief is usually premised on the un-repeatable, un-duplic-
able unknown or unknowable and never a fact - if that were not so it
would never have been called a beLIE) - the second a *underline*Fact*underline* enters the
equation, the situation becomes knowable and the concept of belief be-
comes obsolete and inapplicable.

Imagine someone you love and trusted the most were to tell you
this or that occurred before your birth; or unbeknownst to you. More
likely than not you'd naturally declare that it to be the truth, live and
swear by it. Even more egregious that you'd pass on this tale
to others as if you had known this tale to be true. Even becoming
belligent if someone were to challenge the veracity of this tale.

Again imagine for me if I were to tell you that within my hands
is the ultimate and final Book of Truths. This Book contains all
truths of truths. It answers and responds to every question imagin-
able that you may have about the nature and origin of life, and how,
who and why. In any event how many of you would want to possess and
read this Book of Books, the "The Final Truth"? Must of you would
not even respond, because you already believe that you have the final
book of knowledge within your own religious teachings, doctrines or
faith.

What I am pointing out is what we have had to endure each and
every day in this world of ideological warfare and so it has been
since day one. We have all been victimized our intelligents is daily
being bombarded and assaulted with someone's beliefs about truth.
There are endless number of those who declare "Follow me, no, over
here, follow me, I have discovered, I have found...., I have discern-
ed truth." Another's truth can never become your truth, unless and
until it becomes the truth of your experiences; another's truth

is hearsay; two individuals even witnessing the same events experiences will be different.

We are constantly being pandered, hectored and intrigued with those who want "us" to accept and adopt their politics, religions, dogmas and concepts as to how we should or should not live; how to think, feel, love and even die.

It is puerile and rape of the intelligents for another to attempt to tell you how to live your life by their beliefs; despict its impossibilities. The ancient most definition of truth is: Whatever works. Logic dictates that if you cannot realistically tell me how to live then you have no right to tell me how to die. If your beliefs do not work for me than it is not my truth and of no further interest or use to me.

If you really want to be readily accepted by other join their groups, organizations or simply accept their belief system. There are realistically no neutrals in our world or idealogical camps and warfare - for you to be an individual you must resist simply to exist; and thus you are for or against something or someone. The world is hopelessly divided into ideological camps or every persuasion.

Hi there! I have not completed your transcription yet, but I really enjoyed reading about your thoughts on beliefs and truth. Really interesting to hear a perspective on this outside of my own! I look forward to transcribing more and reading more of your work. Thank you for writing :)