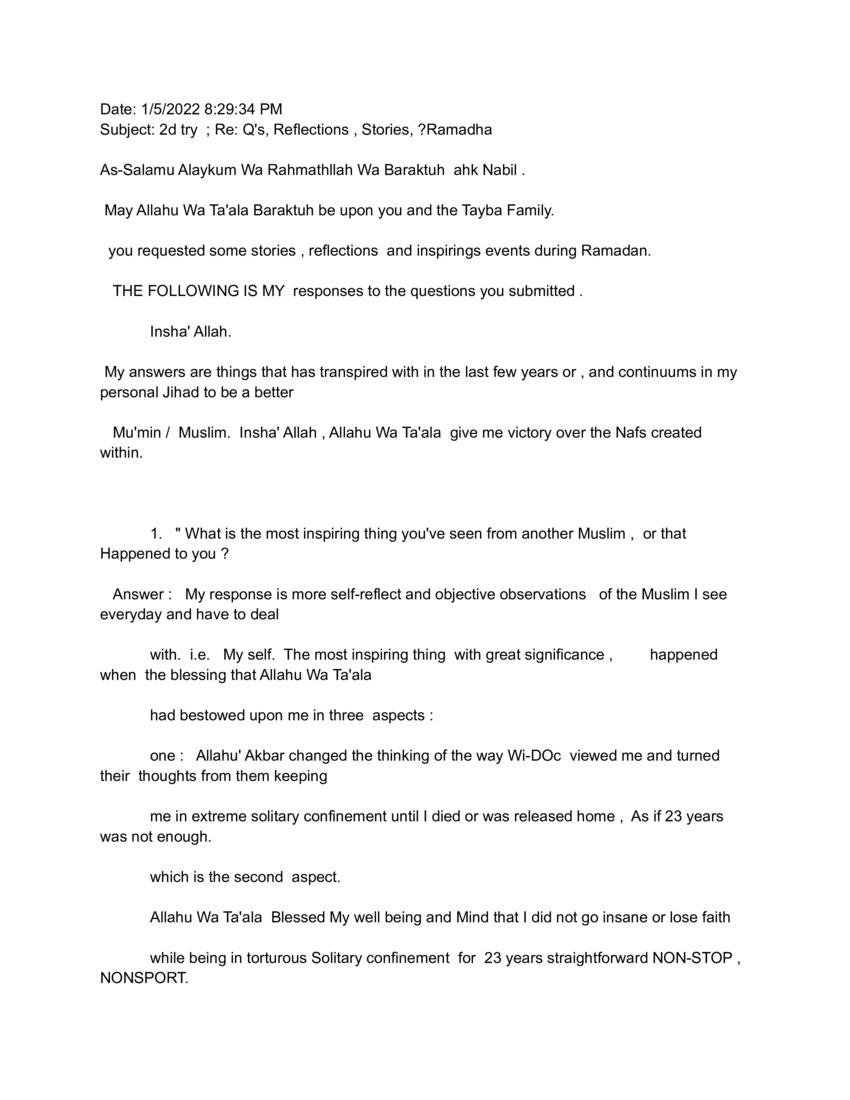 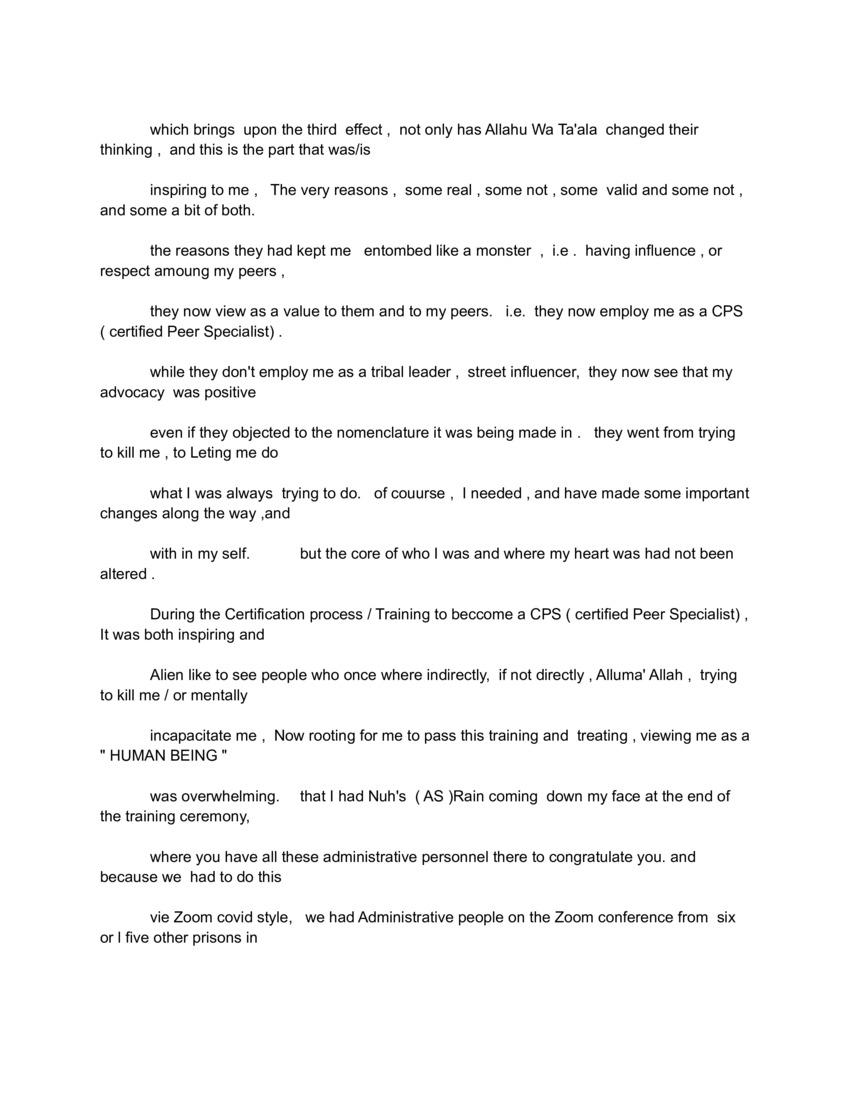 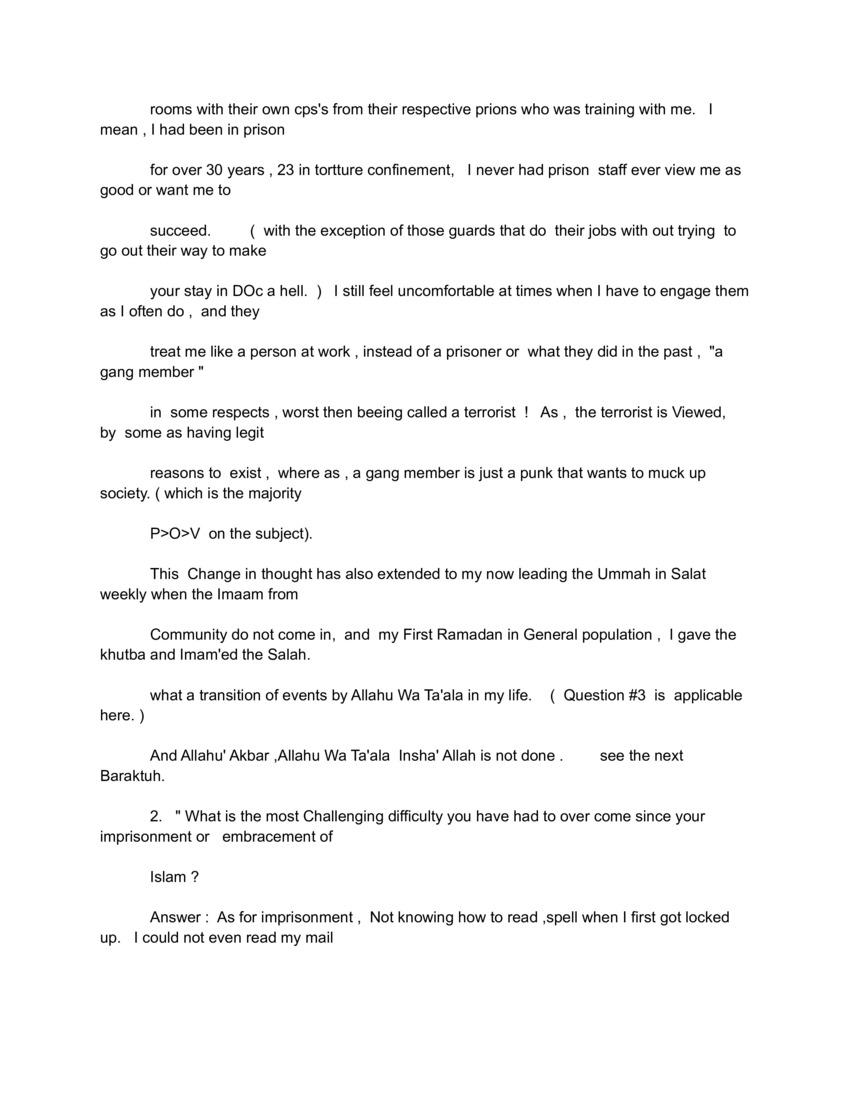 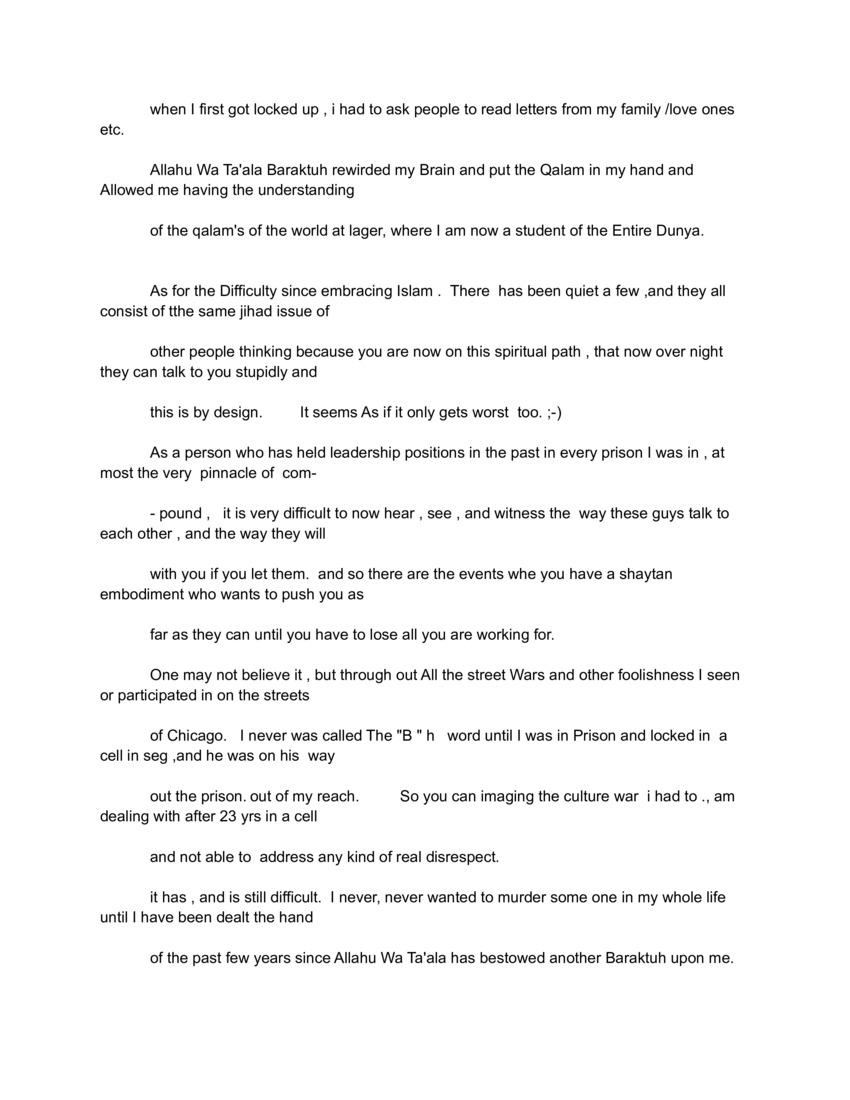 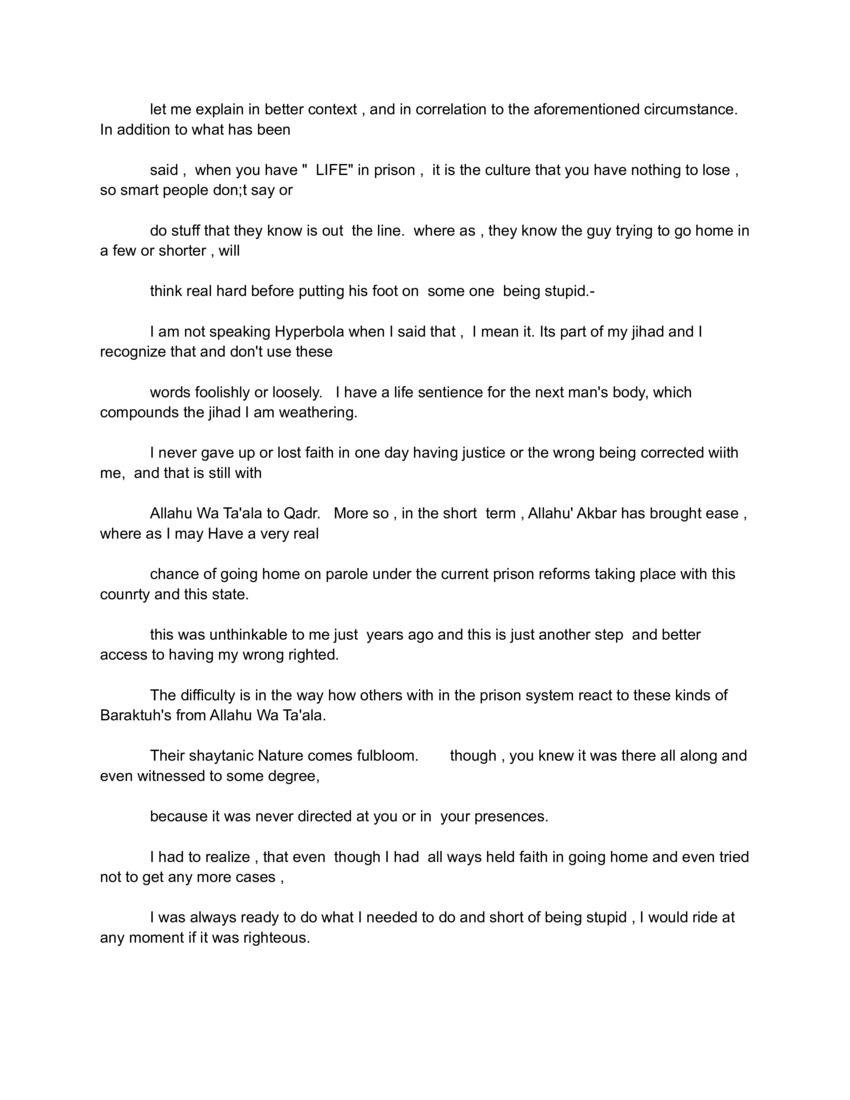 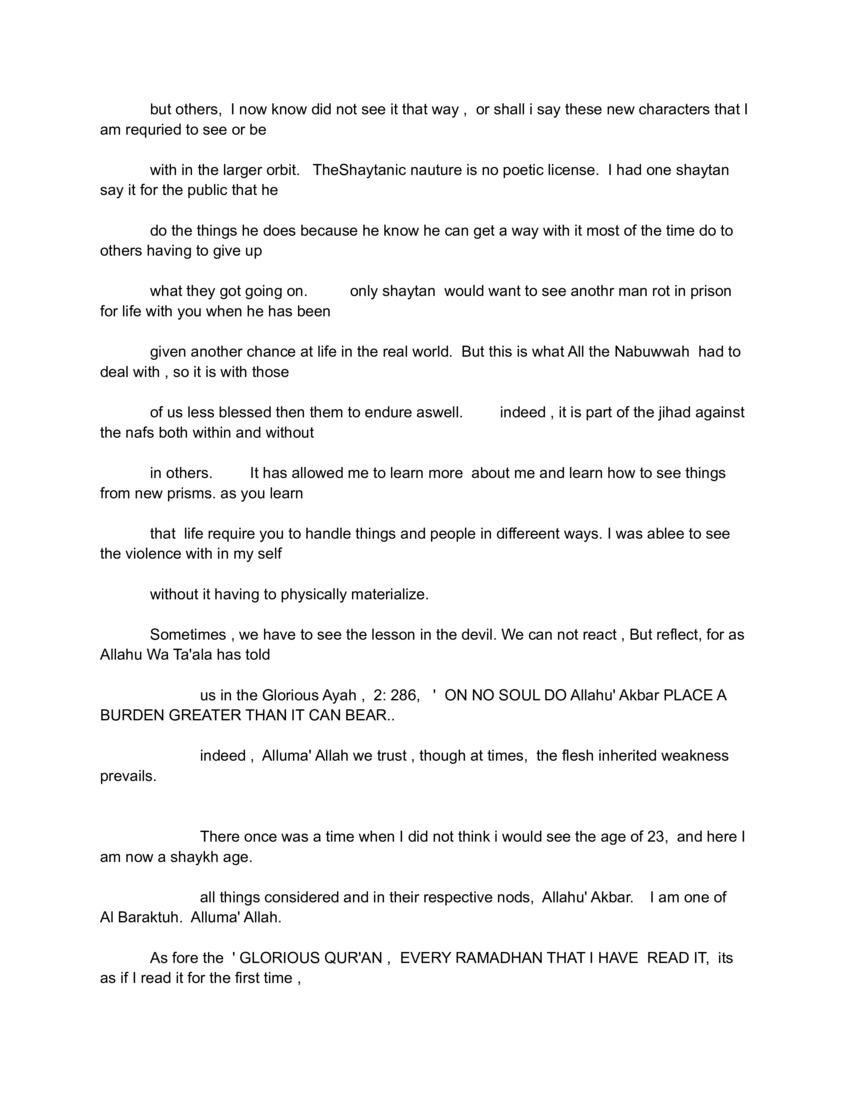 May Allahu Wa Ta'ala Baraktuh be upon you and the Tayba Family.

you requested some stories, reflections and inspirings events during Ramadan.

THE FOLLOWING IS MY responses to the questions you submitted .

My answers are things that has transpired with in the last few years or , and continuums in my personal Jihad to be a better

Mu'min / Muslim. Insha'Allah , Allahu Wa Ta'ala give me victory over the Nafs created within.

1. "What is the most inspiring thing you've seen from another Muslim , or that Happened to you?

Answer: My response is more self-reflect and objective observations of the Muslim I see everyday and have to deal

with. i.e. My self. The most inspiring thing with great significance , happened when the blessing that Allahu Wa Ta'ala

had bestowed upon me in three aspects:

one : Allahu' Akbar changed the thinking of the way Wi-DOc viewed me and turned their thoughts from them keeping

me in extreme solitary confinement until I died or was released home, As if 23 years was not enough.

which is the second aspect.

while being in torturous Solitary confinement for 23 years straightforward NON-STOP , NONSPORT.

which brings upon the third effect , not only has Allahu Wa Ta'ala changed their thinking , and this is the part that was/is

inspiring to me , The very reasons , some real , some not , some valid and some not , and some a bit of both.

the reasons they had kept me entombed like a monster , i.e . having influence , or respect amoung my peers ,

they now view as a value to them and to my peers. i.e. they now employ me as a CPS ( certified Peer Specialist) .

while they don't employ me as a tribal leader, street influencer, they now see that my advocacy was positive

even if they objected to the nomenclature it was being made in . they went from trying to kill me, to Letting me do

what I was always trying to do. of couurse , I needed , and have made some important changes along the way ,and

with in my self. but the core of who I was and where my heart was had not been altered .

During the Certification process / Training to beccome a CPS ( certified Peer Specialist) , It was both inspiring and

Alien like to see people who once were indirectly, if not directly, Alluma/ Allah , trying to kill me / or mentally

incapacitate me , Now rooting for me to pass this training and treating , viewing me as a "HUMAN BEING"

was overwhelming. that I had Nuh's ( AS )Rain coming down my face at the end of the training ceremony,

where you have all these administrative personnel there to congratulate you. and because we had to do this

vie Zoom covid style, we had Administrative people on the Zoom conference from six or I five other prisons in

rooms with their own cps's from their respective prions who was training with me. I mean, I had been in prison

for over 30 years , 23 in tortture confinement, I never had prison staff ever view me as good or want me to

succeed. (. with the exception of those guards that do their jobs with out trying to go out their way to make

your stay in DOc a hell. ) I still feel uncomfortable at times when I have to engage them as I often do , and they

treat me like a person at work, instead of a prisoner or what they did in the past , "a gang member"

in some respects , worst then beeing called a terrorist ! As , the terrorist is Viewed, by some as having legit

reasons to exist , where as , a gang member is just a punk that wants to muck up society. ( which is the majority

Community do not come in, and my First Ramadan in General population , I gave the khutba and Imam'ed the Salah.

what a transition of events by Allahu Wa Ta'ala in my life. ( Question #3 is applicable here. )

And Allahu' Akbar ,Allahu Wa Ta'ala Insha' Allah is not done . see the next Baraktuh.

2. "What is the most Challenging difficulty you have had to over come since your imprisonment or embracement of

Answer: As for imprisonment , Not knowing how to read ,spell when I first got locked up. I could not even read my mail

when I first got locked up , i had to ask people to read letters from my family /love ones etc.

of the qalam's of the world at lager, where I am now a student of the Entire Dunya.

As for the Difficulty since embracing Islam . There has been quit a few ,and they all consist of tthe same jihad issue of

other people thinking because you are now on this spiritual path , that now over night they can talk to you stupidly and

this is by design. It seems As if it only gets worst too. ;-)

As a person who has held leadership positions in the past in every prison I was in , at most the very pinnacle of com-

- pound, it is very difficult to now hear , see , and witness the way these guys talk to each other , and the way they will

with you if you let them. and so there are the events whe you have a shaytan embodiment who wants to push you as

far as they can until you have to lose all you are working for.

One may not believe it , but through out All the street Wars and other foolishness I seen or participated in on the streets

of Chicago. I never was called the "B " h word until I was in Prison and locked in a cell in seg ,and he was on his way

out the prison. out of my reach. So you can imagining the culture war i had to., am dealing with after 23 yrs in a cell

and not able to address any kind of real disrespect.

it has , and is still difficult. I never, never wanted to murder some one in my whole life until I have been dealt the hand

of the past few years since Allahu Wa Ta'ala has bestowed another Baraktuh upon me.

let me explain in better context, and in correlation to the aforementioned circumstance. In addition to what has been

said, when you have " LIFE" in prison , it is the culture that you have nothing to lose , so smart people don;t say or

do stuff that they know is out the line. where as , they know the guy trying to go home in a few or shorter , will

think real hard before putting his foot on some one being stupid.-

I am not speaking Hyperbola when I said that , I mean it. Its part of my jihad and I recognize that and don't use these

words foolishly or loosely. I have a life sentence for the next man's body, which compounds the jihad I am weathering.

I never gave up or lost faith in one day having justice or the wrong being corrected with me, and that is still with

Allahu Wa Ta'ala to Qadr. More so , in the short term , Allahu' Akbar has brought ease , where as I may Have a very real

chance of going home on parole under the current prison reforms taking place with this counrty and this state.

this was unthinkable to me just years ago and this is just another step and better access to having my wrong righted.

The difficulty is in the way how others with in the prison system react to these kinds of Baraktuh's from Allahu Wa Ta'ala.

Their shaytanic Nature comes fulbloom. though , you knew it was there all along and even witnessed to some degree,

because it was never directed at you or in your presences.

I had to realize , that even though I had all ways held faith in going home and even tried not to get any more cases ,

I was always ready to do what I needed to do and short of being stupid , I would ride at any moment if it was righteous.

but others, I now know did not see it that way , or shall I say these new characters that I am required to see or be

with in the larger orbit. TheShaytanic nature is no poetic license. I had one shaytan say it for the public that he

what they got going on. only shaytan would want to see anothr man rot in prison for life with you when he has been

given another chance at life in the real world. But this is what All the Nabuwwah had to deal with , so it is with those

of us less blessed then them to endure aswell. indeed , it is part of the jihad against the nafs both within and without

in others. It has allowed me to learn more about me and learn how to see things from new prisms. as you learn

that life require you to handle things and people in different ways. I was able to see the violence with in my self

without it having to physically materialize.

Sometimes , we have to see the lesson in the devil. We can not react , But reflect, for as Allahu Wa Ta'ala has told

indeed, Alluma' Allah we trust , though at times, the flesh inherited weakness prevails.

There once was a time when I did not think I would see the age of 23, and here I am now a shaykh age.

all things considered and in their respective nods, Allahu'Akbar. I am one of Al Baraktuh. Alluma'Allah.

As fore the 'GLORIOUS QUR'AN, EVERY RAMADHAN THAT I HAVE READ IT, its as if I read it for the first time,

as the layers of understanding Allahu Wa Ta'ala reveal to us each time we read it is "TRULY AMAZING'.

I ask Allahu Wa Ta'ala that this coming Ramadhan, Insha'Allah, we live to see it, that We All are Blessed to

and Allahu Wa Ta'ala bestow Baraktuh upon the Tayba family and the grandeur of the Diin. Allahu'Akbar.

I'm glad that your faith helped you stay true to yourself, even while enduring the difficulties of situation that you were put through. Your perspective really is interesting, going from someone who was merely a prisoner for so long to a Certified Peer Specialist, as you are now. Thank you again for sharing!