Well, it's about time 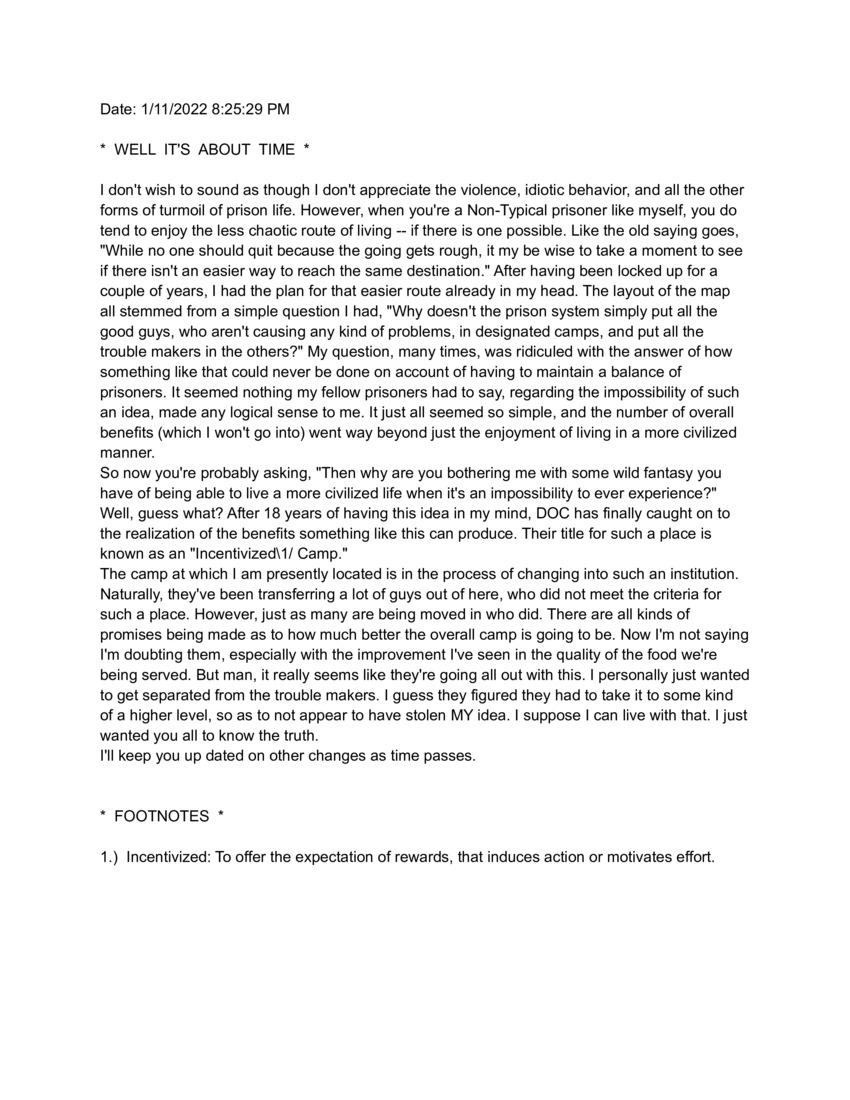 I don't wish to sound as though I don't appreciate the violence, idiotic behavior, and all the other forms of turmoil of prison life. However, when you're a Non-Typical prisoner like myself, you do tend to enjoy the less chaotic route of living -- if there is one possible. Like the old saying goes, "While no one should quit because the going gets rough, it my be wise to take a moment to see if there isn't an easier way to reach the same destination." After having been locked up for a couple of years, I had the plan for that easier route already in my head. The layout of the map all stemmed from a simple question I had, "Why doesn't the prison system simply put all the good guys, who aren't causing any kind of problems, in designated camps, and put all the trouble makers in the others?" My question, many times, was ridiculed with the answer of how something like that could never be done on account of having to maintain a balance of prisoners. It seems nothing my fellow prisoners had to say, regarding the impossibility of such an idea, made any logical sense to me. It just all seemed so simple, and the number of overall benefits (which I won't go into) went way beyond just the enjoyment of living in a more civilized manner.
So now you're probably asking, "Then why are you bothering me with some wild fantasy you have of being able to live a more civilized life when it's an impossibility to ever experience?" Well, guess what? After 18 years of having this idea in mind, DOC has finally caught on to the realization of the benefits something like this can produce. Their title for such a place is known as an "Incentivized\1/ Camp."
The camp at which I am presently located is in the process of changing into such an institution. Naturally, they've been transferring a lot of guys out of here, who did not meet the criteria for such a place. However, just as many are being moved in who did. There are all kinds of promises being made as to how much better the overall camp is going to be. Now I'm not saying I'm doubting them, especially with the improvement I've seen in the quality of the food we're being served. But man, it really seems like they're going all out with this. I personally just wanted to get separated from the trouble makers. I guess they figured they had to take it to some kind of higher level, so as to not appear to have stolen MY idea. I suppose I can live with that. I just wanted you all to know the truth.
I'll keep you up dated on other changes as time passes.

1.) Incentivized: To offer the expectation of rewards, that induces action or motivates effort.

Ove read this and I'm not sure I'd say anything to help or would I think I'd know anything right to say about this. I'm sure the trouble makers are all over and same with non trouble makers. So I'm sure it would be make great sense what your talking about. I can see that it be a problem separating the two. I'd see that people change day by night. Or night by day. Then maybe a deliberation problem. Turning into judgemental. Then gotta remember the haters. Sadly there's always someone who is going to ruin the time for others. Like the class clown. Like the one who broke glass bottles at the park. So then the park closed down, and the good ones that (would never break a bottle). They never can enjoy the park again. Ruined for everyone because of the bad. Not far but life isn't always far even for the good and the bad. Equal when I understand what your saying believe me. Because it's not Equal it's just not far. I'd say it's what makes the world go around. I know for me, I stand proud and keep myself together without showing weakness. Strength within helps with dealing with idiots. They are every where. Just saying. I read your blog I felt that instead of passing by it. I'd try to or least respond to you. I'm Julianne I'm no one really. No one who matters. No one you know. Just wanted to respond. Now you know people do read your blog.
I just seen that I didn't read your whole blog. I just noticed that. I apologize for responding and not realizing that I missed half your blog. I still feel like I cover the subject even without knowing that I didn't read it all before I responded. Hey not bad on my end. Well I seen the first part saying 2 years. As I found the other end to read damit 18 years? Are you doing life sentence? Or do you have a release date? None of my dam business I know. I apologize but curious George . Yeah well I'm just curious is all. It doesn't matter either way. It just gives me a better way of thinking about you. About what you go through/ been through/ mostly a understanding is all. You definitely don't need to tell me a dam thing. I just hope maybe you'll enjoy knowing that I responded to your blog. Maybe I'll hear back from you. Julianne is my name. Maybe you'll type back
(scanned reply – view as blog post)
uploaded April 3, 2022.  Original (PDF) 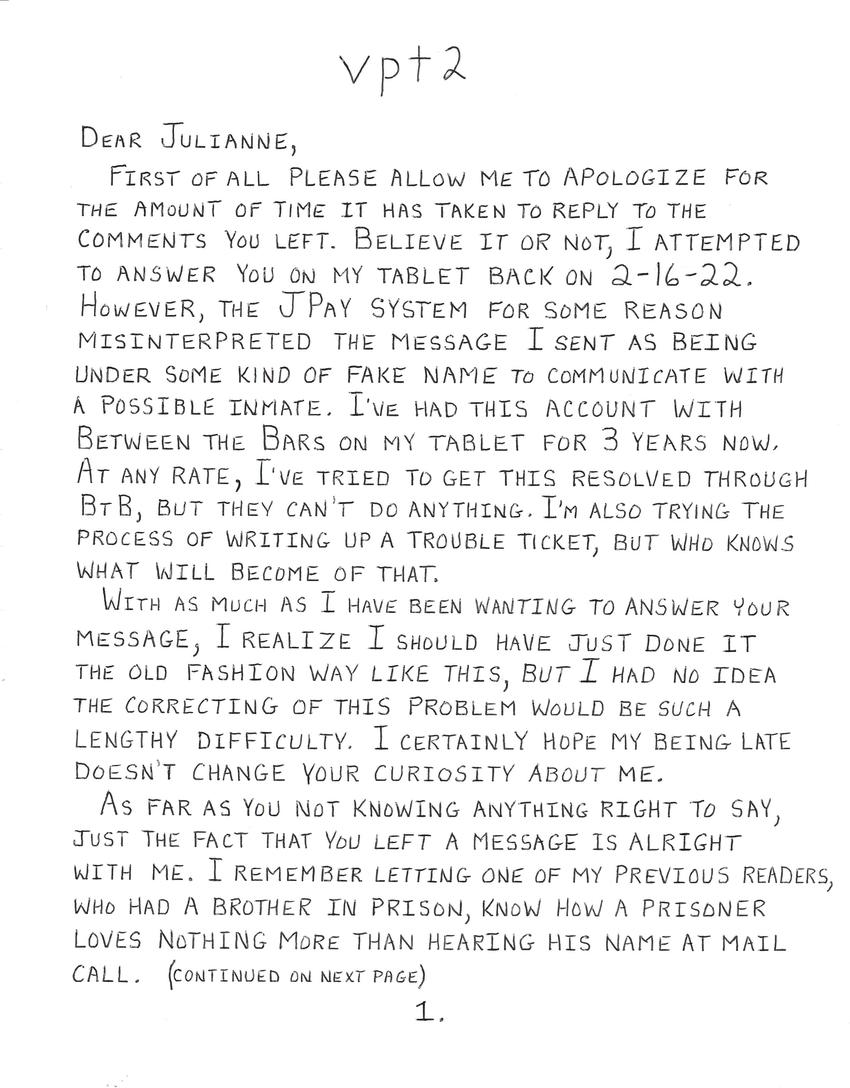 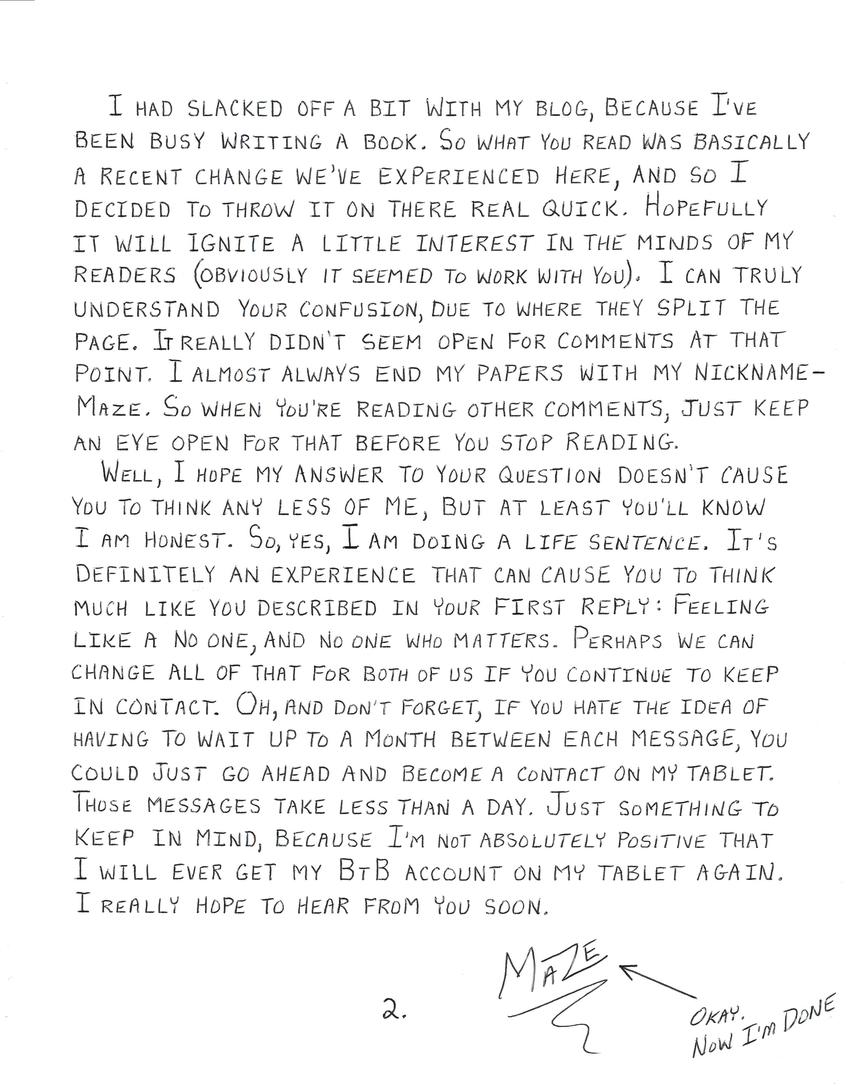