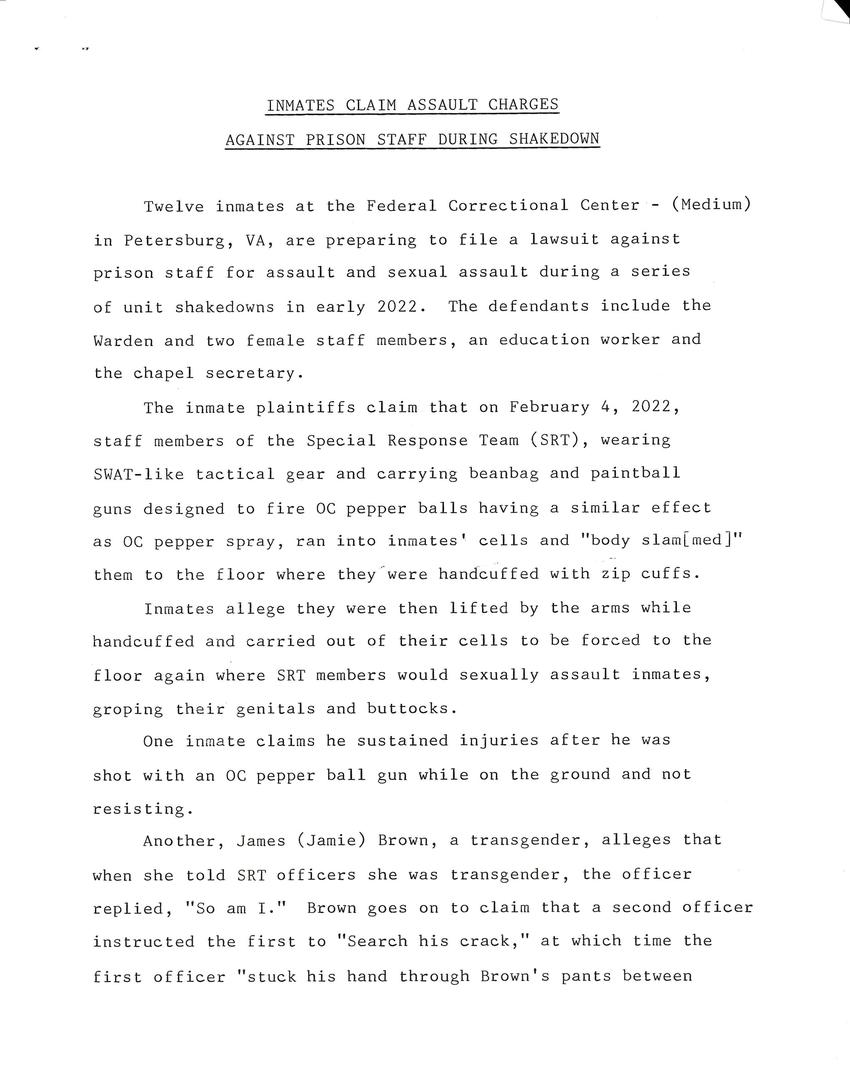 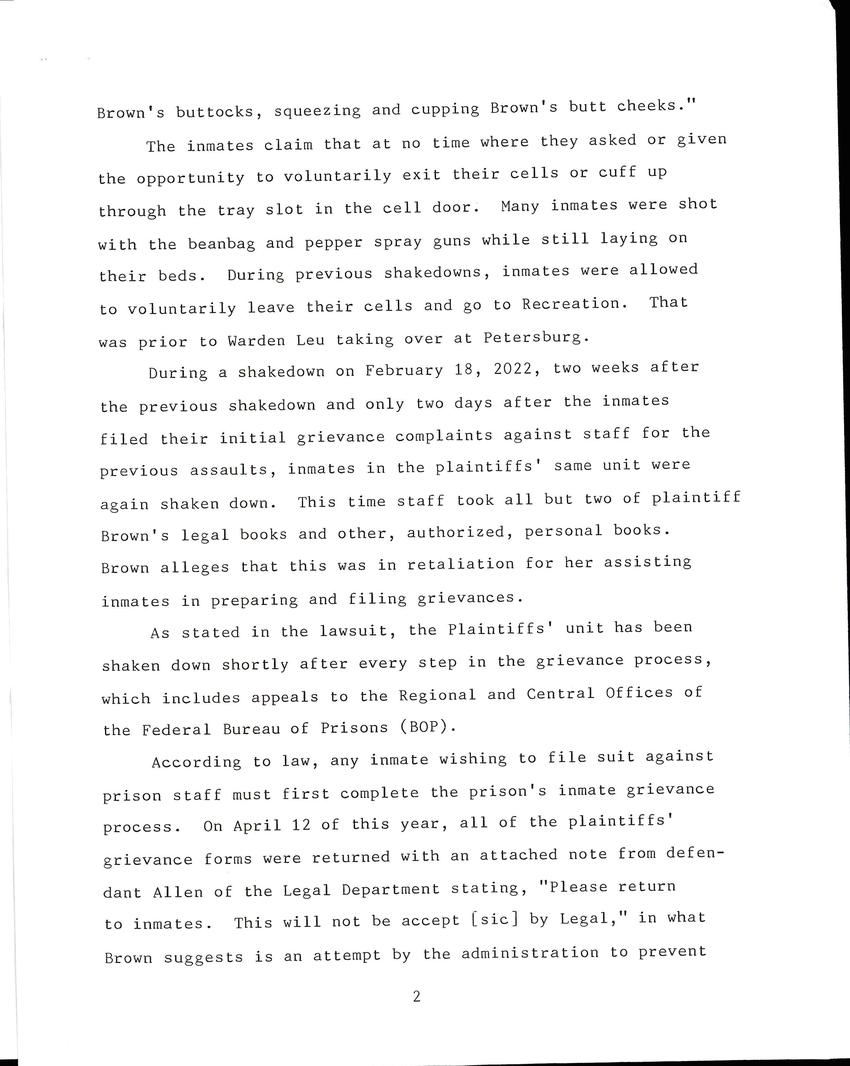 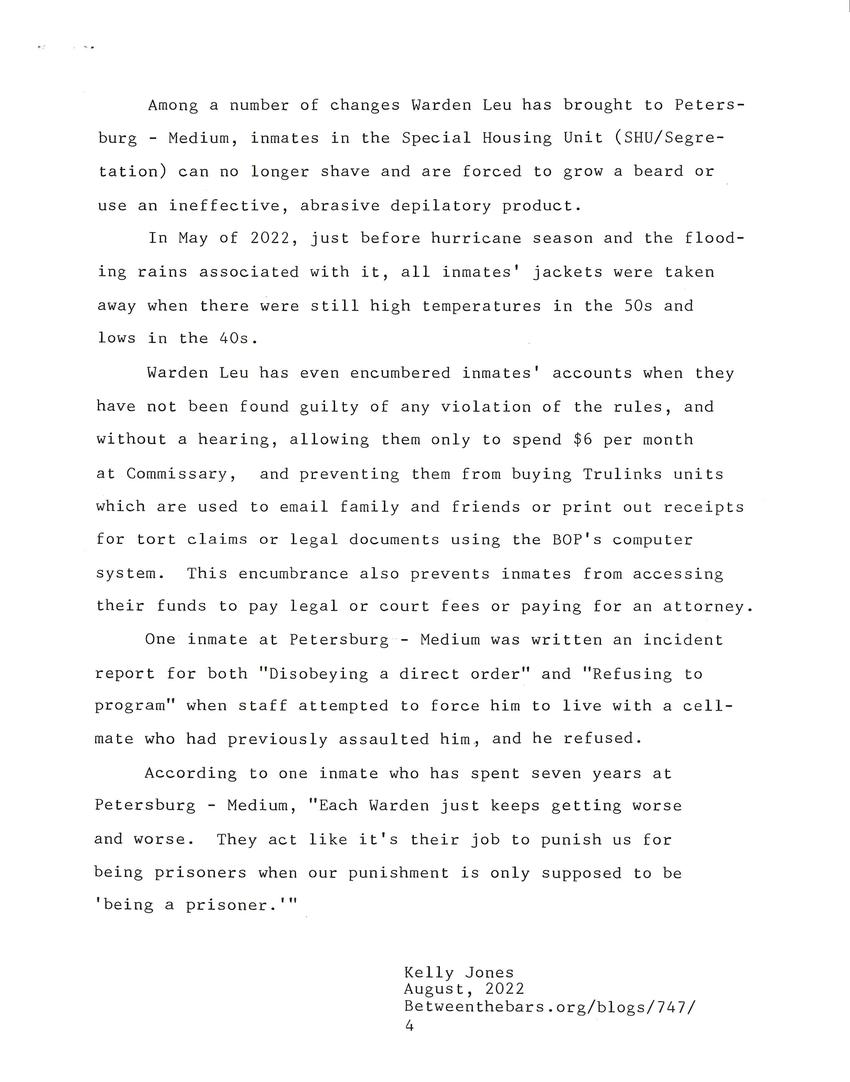 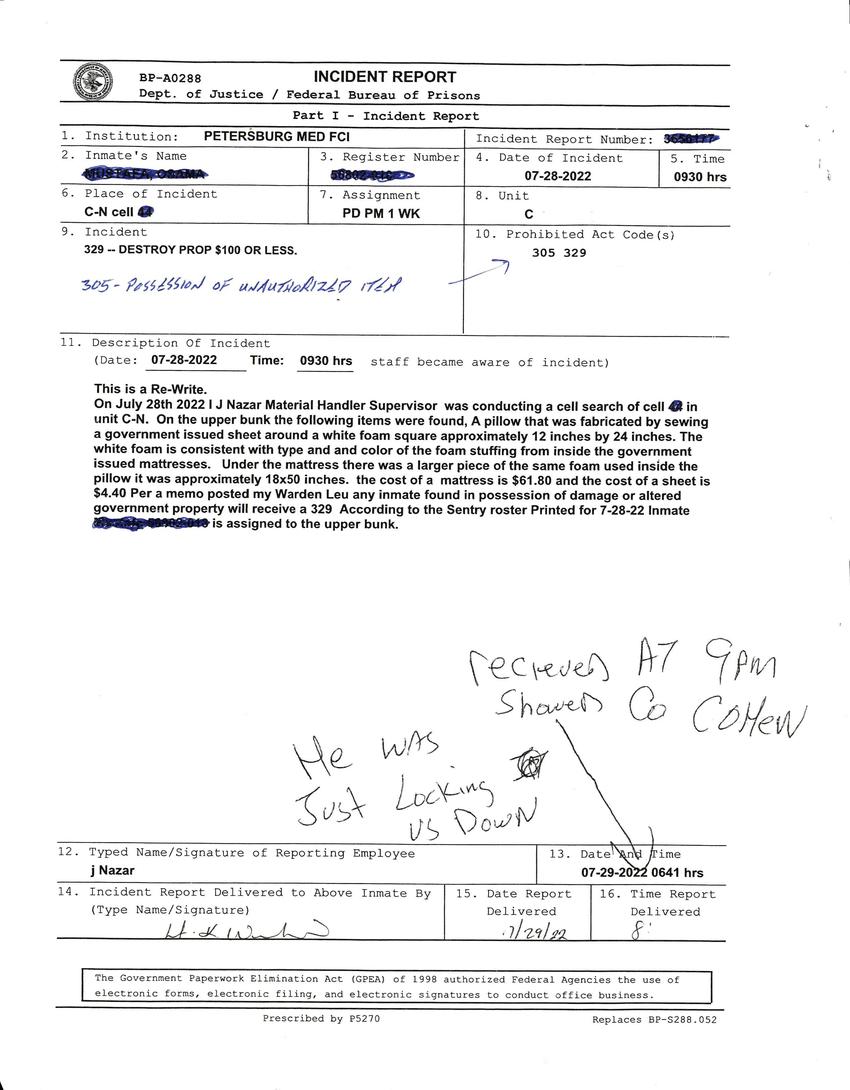 Twelve inmates at the Federal correctional Center - (Medium) in Petersburg, VA, are preparing to file a lawsuit against prison staff for assault and sexual assault during a series of unit shakedowns in early 2022. the defendants include the Warden and two female staff members, an education worker and the chapel secretary.

The inmate plaintiffs claim that on February 4, 2022, staff members of the Special Response Team (SRT), wearing SWAT-like tactical gear and carrying beanbag and paintball guns designed to fire OC pepper balls having a similar effect as OC pepper spray, ran into inmates' cells and "body slam[med]" them to the floor where they were handcuffed with zip cuffs.

Inmates allege they were then lifted by the arms while handcuffed and arried out of their cells to be force to the floor again where SRT members would sexually assault inmates, groping their genitals and buttocks.

One inmate claims he sustained injuries after he was shot with an OC pepper ball gun while on the ground and not resisting.

Another, James (Jamie) Brown, a transgender, alleges that when she told SRT officers she was transgender, the officer replied, "So am I." Brown goes on to claim that second a officer instructed the first to "Search his crack," at which time the first officer "stick his hand through Brown's pants between Brown's buttocks, squeezing and cupping Brown's butt cheeks."

The inmates claim that at no time where they asked or given the opportunity to voluntarily exit their cells or cuff up through the tray slot in the cell door. Many inmates were shot with beanbag and pepper spray guns while still laying on their beds. During previous shakedowns, inmates were allowed to voluntarily leave their cells and go to recreation. That was prior to Warden Leu taking over at Petersburg.

During a shakedown on February 18, 2022, two weeks after the previous shakedown and only two days after the inmates filed their initial grievance complaints against staff for the previous assaults, inmates in the plaintiffs' same unit were again shaken down. This time staff took all but two of plaintiff Brown's legal books and other, authorized, personal books. Brown alleges that this was in retaliation for her assisting inmates in preparing and filing grievances.

As stated in the lawsuit, the Plaintiffs' unit has been shaked down shortly after every step in the grievance process, which includes appeals to the Regional and Central Offices of the Federal Bureau of Prisons (BOP).

According to law, any inmate wishing to file suit against prison staff must first complete the prison's inmate grievance process. On April 12 of this year, all of the plaintiffs' grievance forms were returned with an attached note from defendant Allen of the lEgal Department stating, "Please return to inmates. This will not be accept [sic] by legal, " in what Brown suggests is an attempt byt he administration to prevent Among a number of changes Warden Leu has brought to Petersburg Medium, inmates int eh Special Housing Unit (SHU/Sergretation) can no longer shave and are forced to grow a bear or use an ineffective, abrasive depilatory product.

In may of 2022, just before hurricane season and the flooding rains associated with it, all inmates' jackets were taken away when there were still high temperatures in the 50s and lows in the 40s.
Warden Leu has even encumbered inmates' accounts when they have no been found guilty of any violation of the rules, and without a hearing, allowing them only to spend $6 per month at Commissary, and preventing them from buying Trulinks units which are used to email family and friends or print out receipts for tort claims or legal documents using the BOP's computer system. This encumbrance also prevents inmates from accessing their funds to pay legal or court fees or paying for an attorney.

One inmate at Petersburg - Medium was written an incident report for both "Disobeying a direct order" and "Refusing to program" when staff attempted to force him to live with a cellmate who had previously assaulted him, and he refused.

According to one inmate who has spent seven years at Petersburg - Medium, "Each Warden just keeps getting worse and worse. They act like it's their job to punish us for being prisoners when our punishment is only supposed to be 'being a prisoner.'"