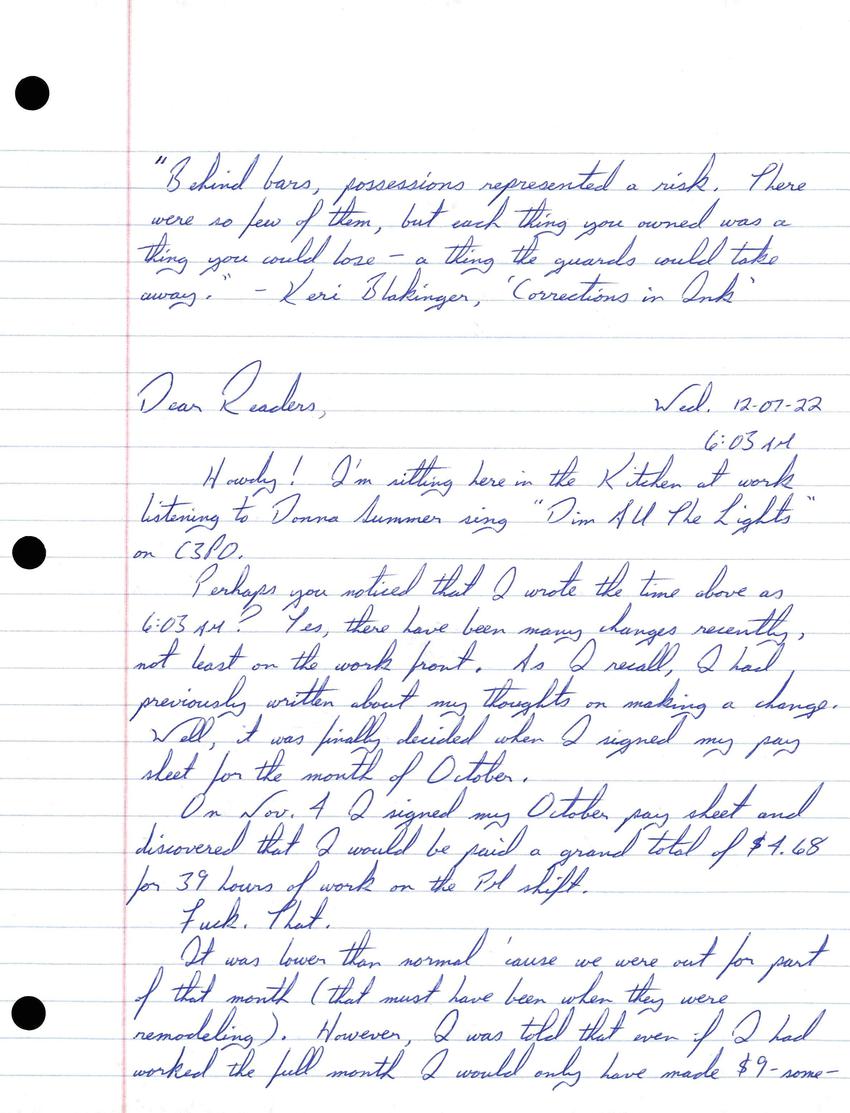 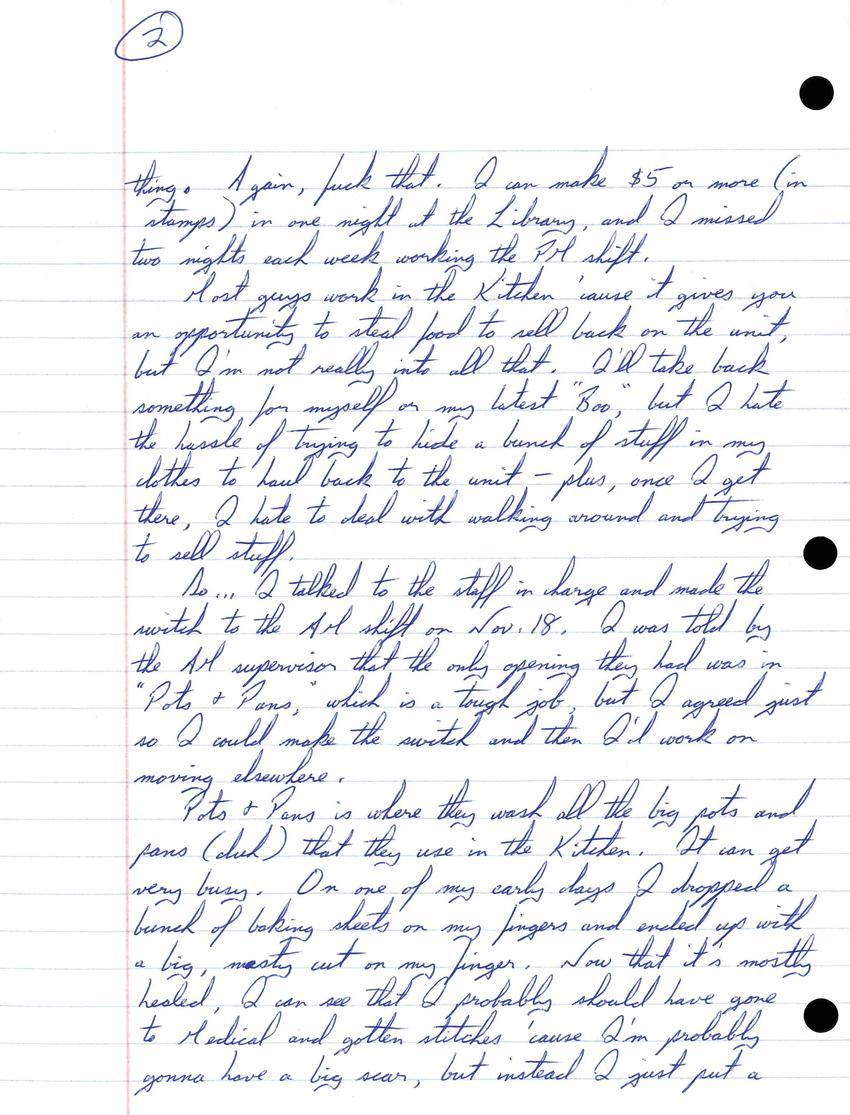 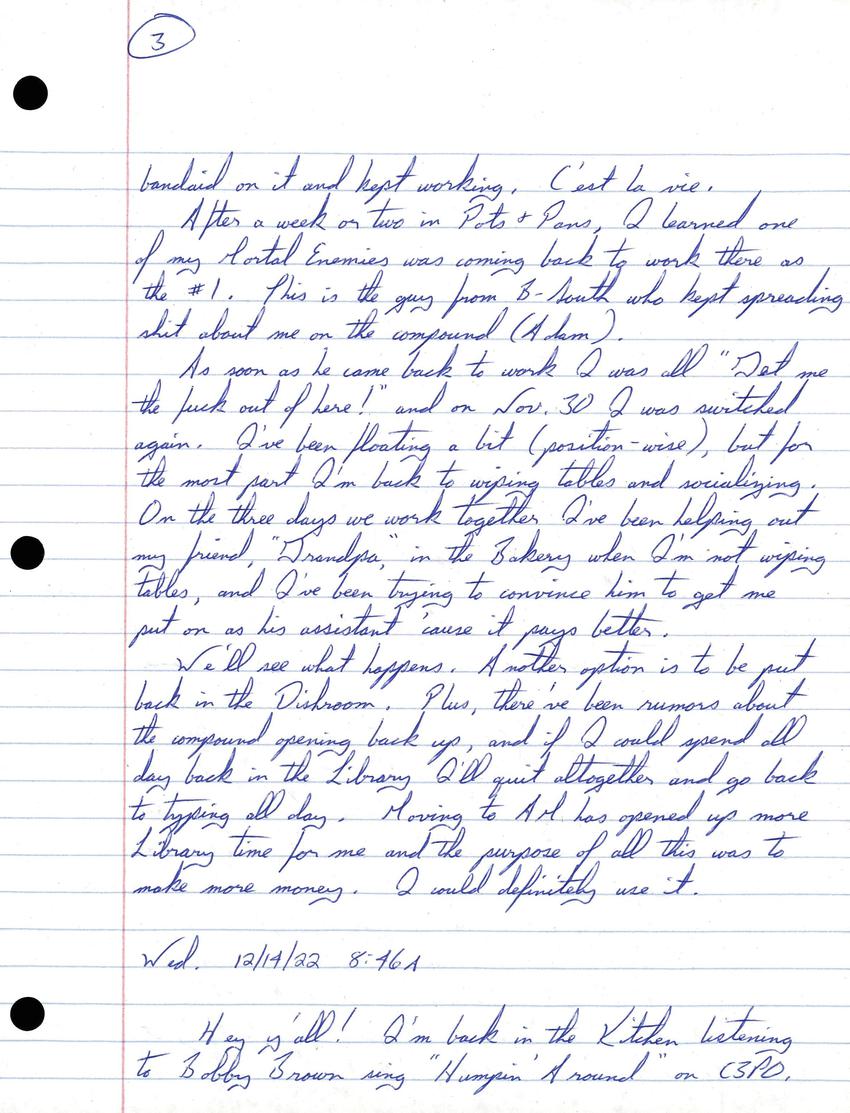 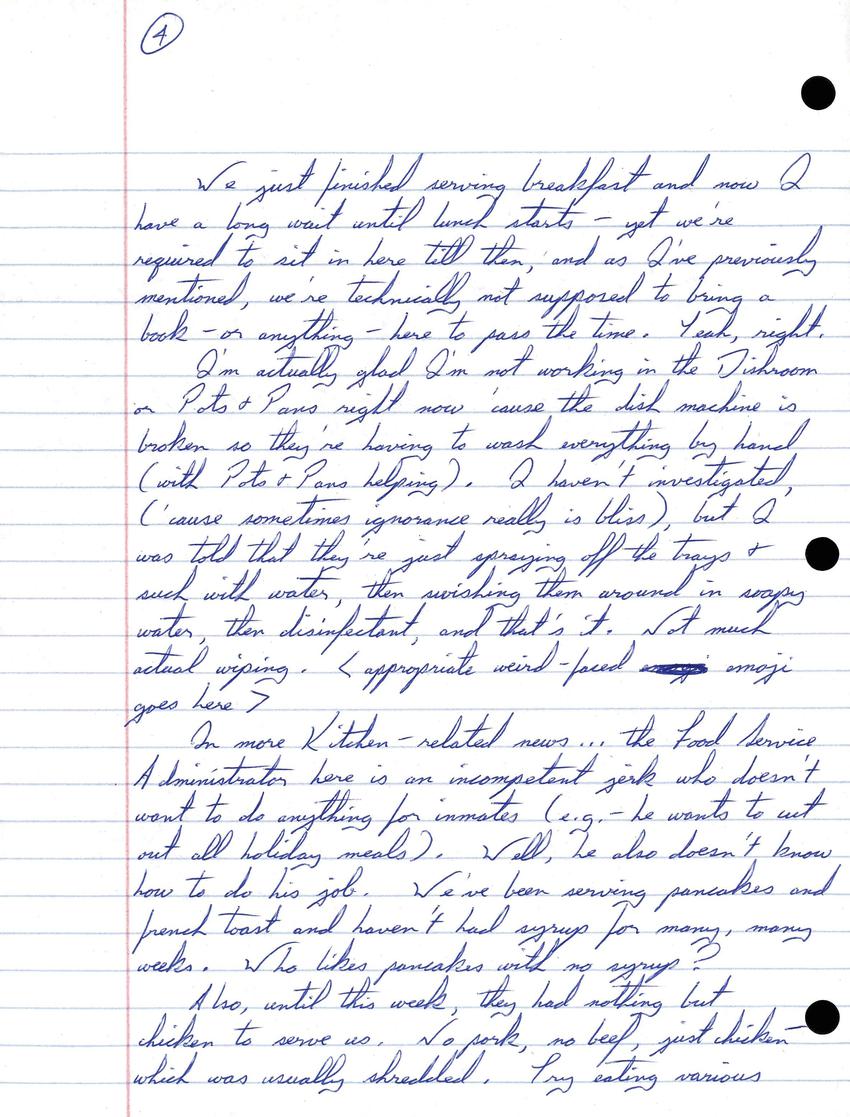 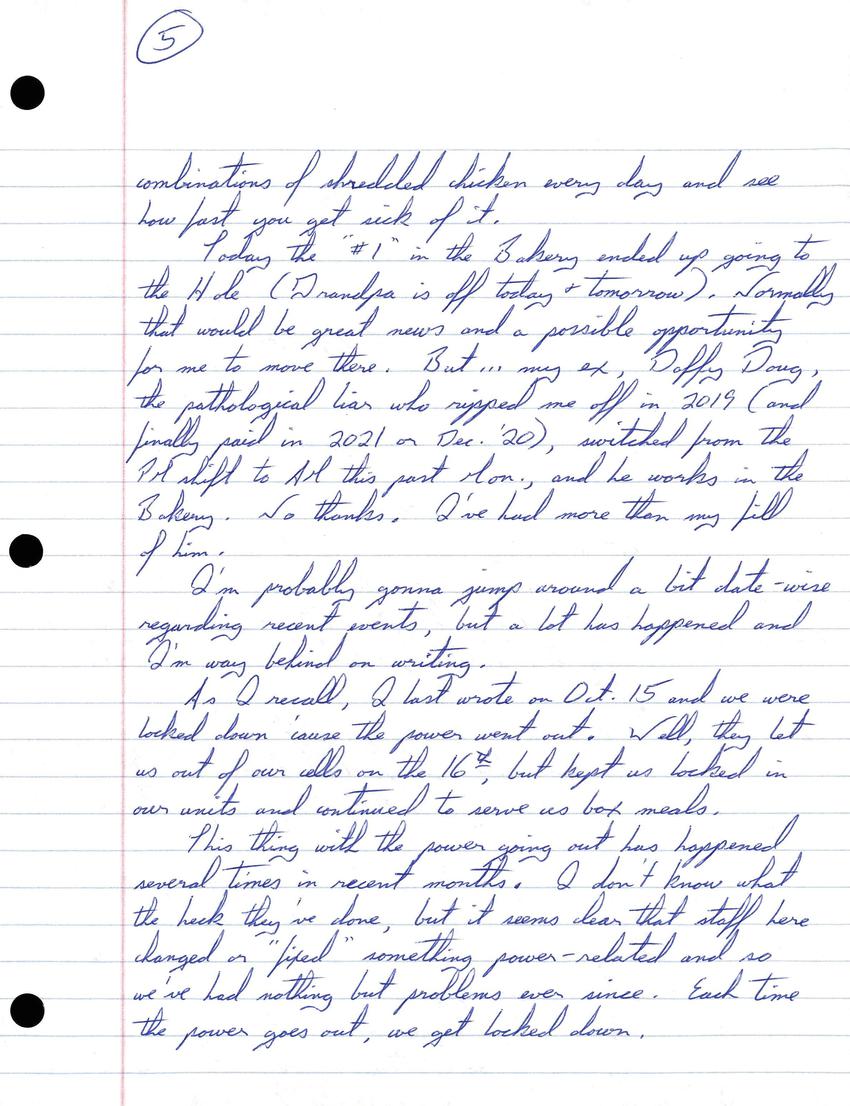 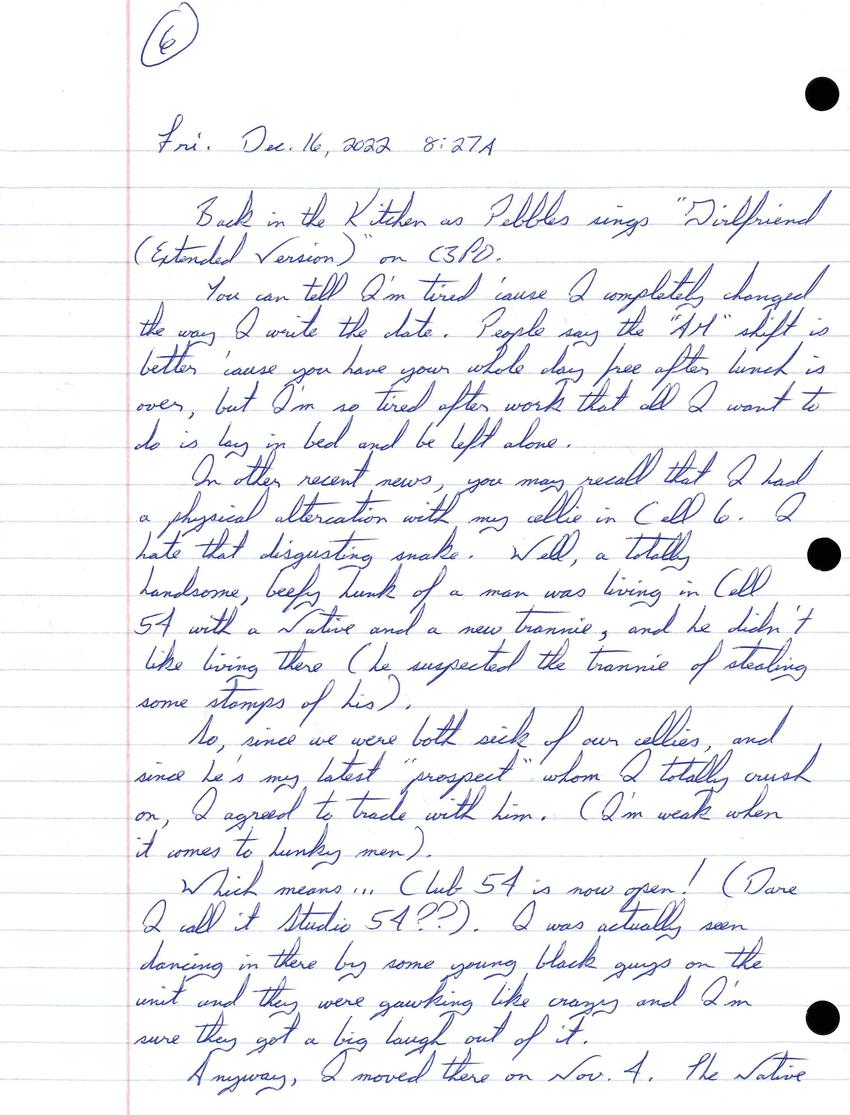 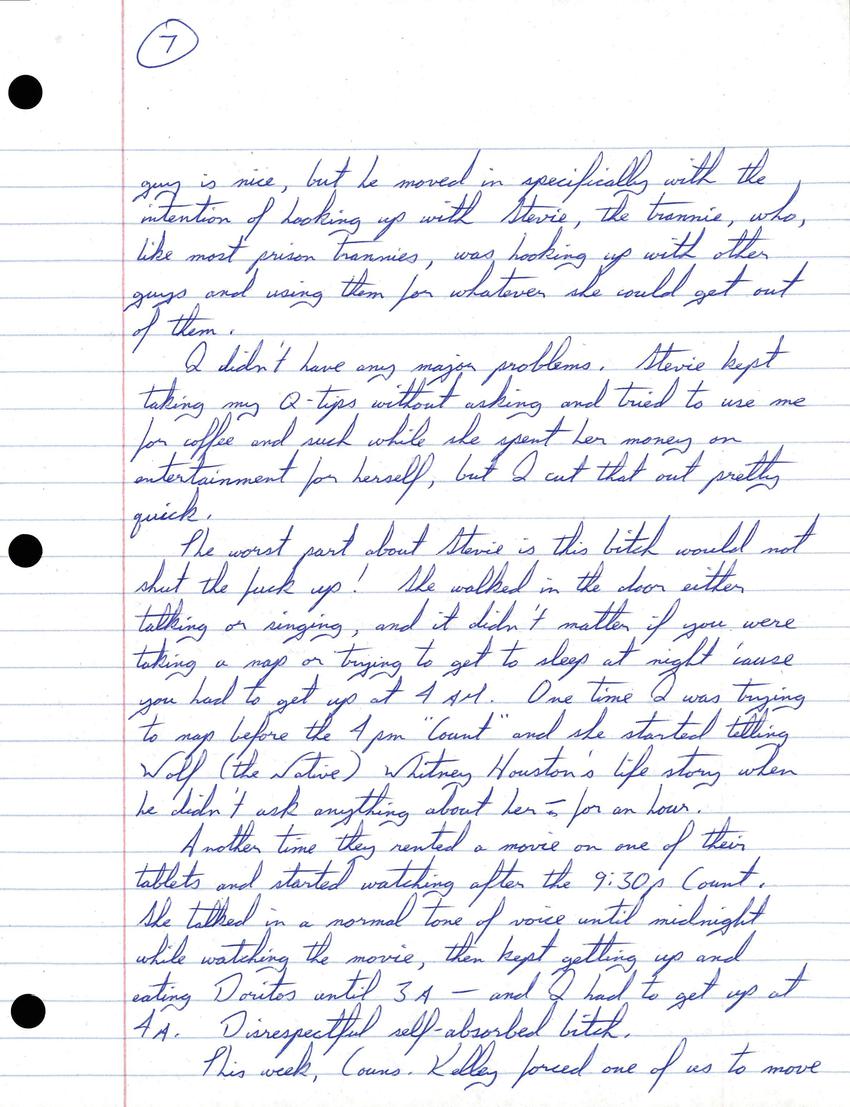 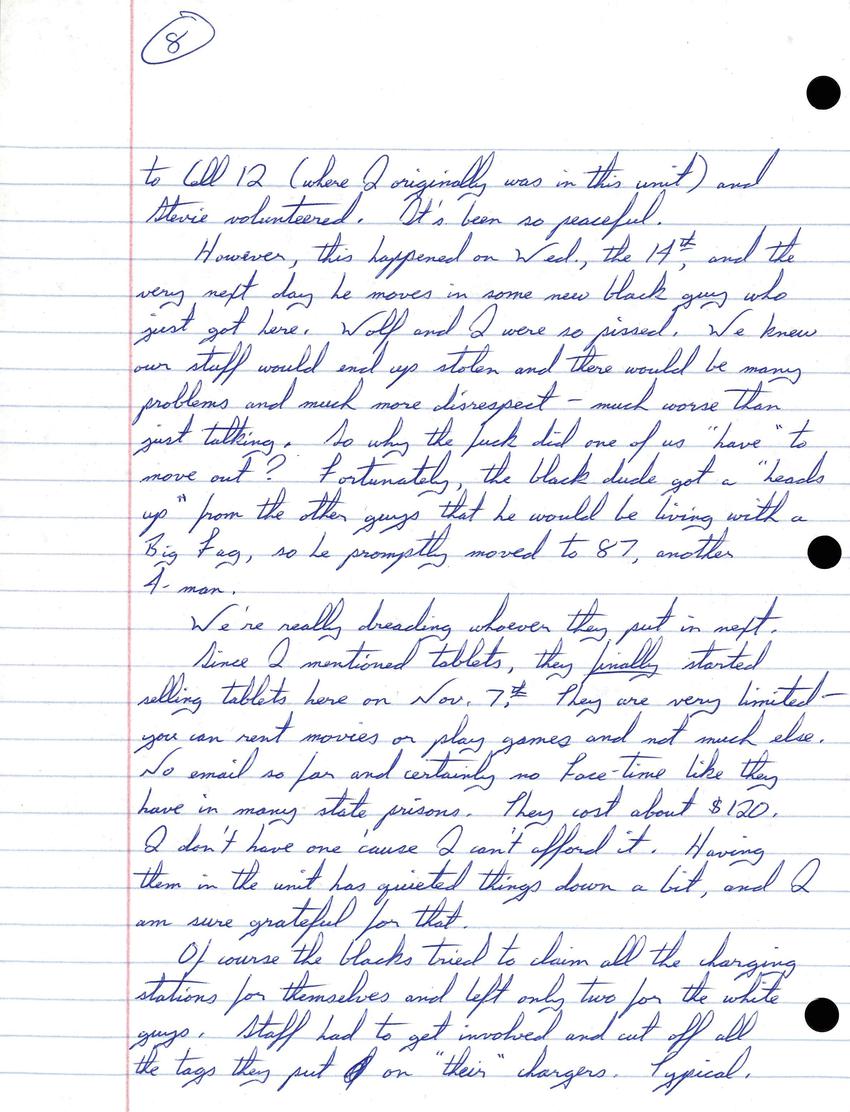 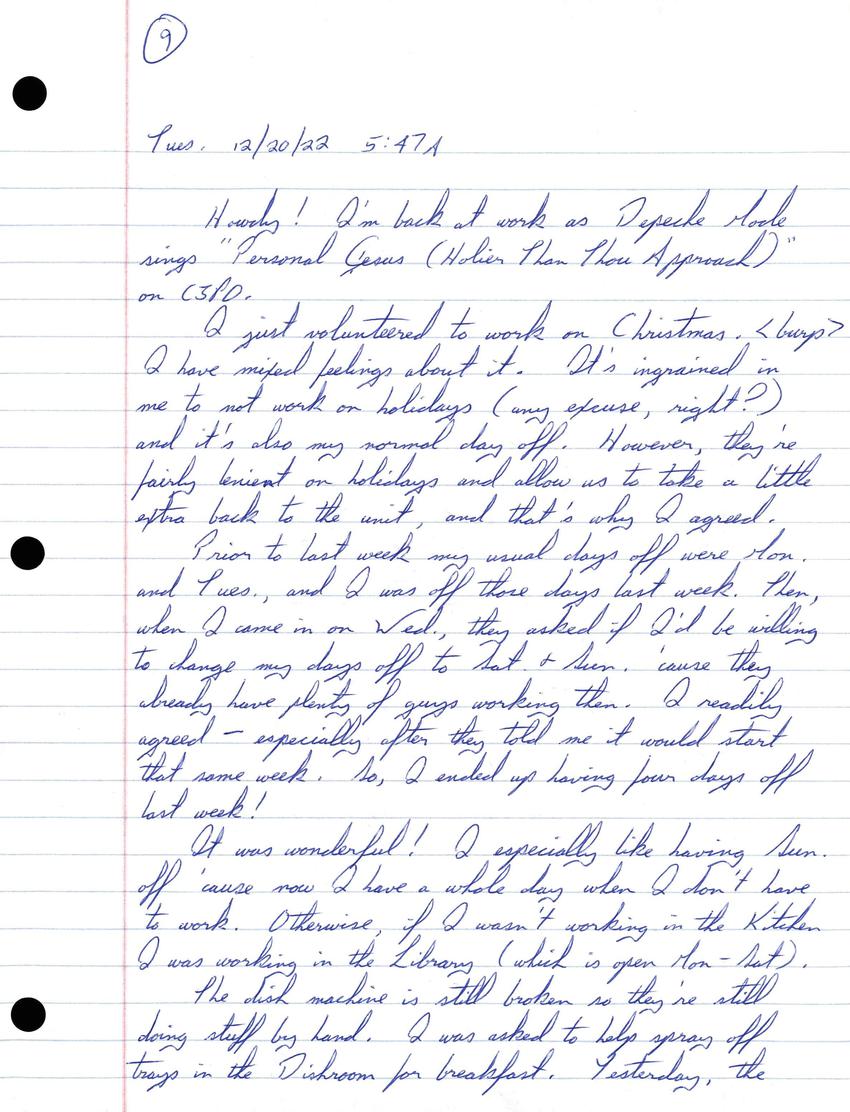 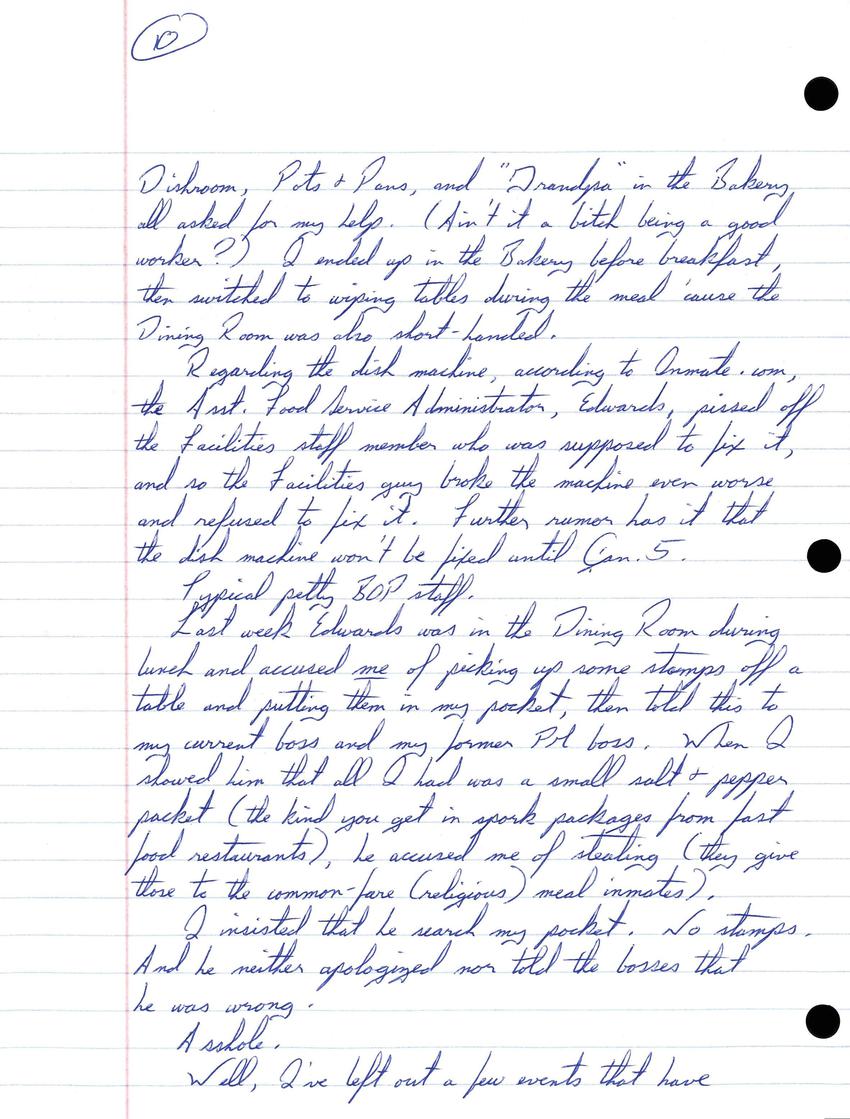 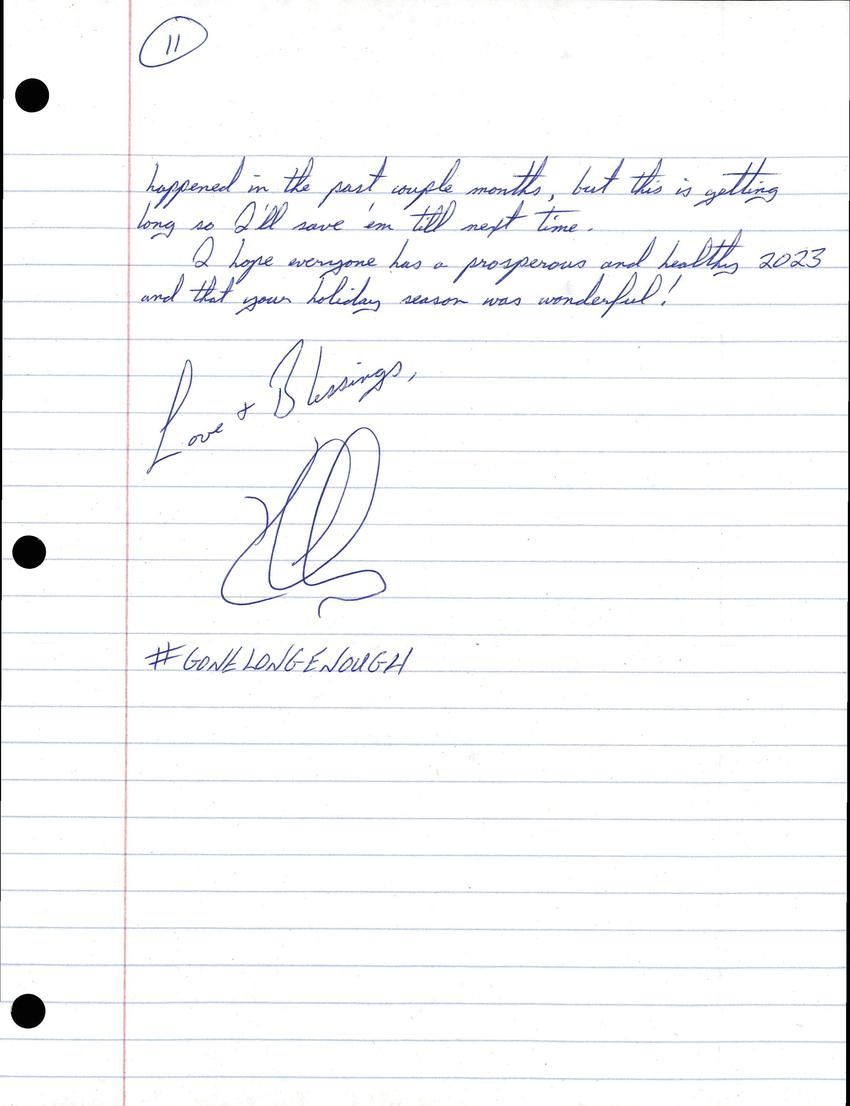 "Behind bars, possessions represented a risk. There were so few of them, but each thing you owned was a thing you could lose - a thing the guards would take away." -Keri Blakinger, 'Corrections in Ink'

Howdy! I'm sitting here in the kitchen at work listening to Donna Summer sing " Dim All the Lights" on C3PO.

Perhaps you noticed that I wrote the time above as 6:03 AM? Yes, there have been many changes recently, not least on the work front. As I recall, I had, previously written about my thought on making a change. Well, it was finally decided when I signed my pay sheet for the month of October.

On Nov. 4 I signed my October pay sheet and discovered that I would be paid a grand total of $4.68 for 39 hours of work on the PM shift.

It was lower than normal 'cause we were out for part of that month (that must have been when they were remodeling). However, I was told that even if I had worked the full month, I would only have made $9-something. Again, fuck that. I can make $5 or more (in stamps) in one night at the Library, and I missed two shifts each week working the PM shift.

Most guys work in the kitchen 'cause it gives you an opportunity to steal food to sell back on the unit, but I'm not really into all that. I'll take back something for myself or my latest "Boo," but I hate the hassle of trying to hide a bunch of stuff in my clothes to haul back to the unit - plus, once I get there, I hate to deal with walking around and trying to sell stuff.

So... I talked to the staff in charge and made the switch to the AM shift on Nov. 18. I was told by the AM supervisor that the only opening they had was in "Pots & Pans," which is a tough job, but I agreed just so I could make the switch and then I'd work on moving elsewhere.

Pots & Pans is where they wash all the big pots and pans (duh) that they use in the kitchen. It can get very busy. On one of my early days I dropped a bunch of baking sheets on my fingers and ended up with a big, nasty cut on my finger. Now that it's mostly healed, I can see that I probably should have gone to Medical and gotten stitches 'cause I'm probably gonna have a big scar, but instead I just put a bandaid on it and ke[t working. C'est la vie.

After a week or two in Pots & Pans, I learned one of my Mortal Enemies was coming back to work there as the #1. This is the guy from B-South who kept spreading shit about me on the compound (Adam).

As soon as he came back to work I was all "Get me the fuck out of here!" and on Nov. 30 I was switched again. I've been floating a bit (position-wise), but for the most part I'm back to wiping tables and socializing. On the three days we work together I've been helping out my friend, "Grandpa," in the Bakery when I'm not wiping tables, and I've been trying to convince him to get me put on as his assistant 'cause it pays better.

We'll see what happens. Another option is to be put back in the Dishroom. Plus, there've been rumors about the compound opening back up, and if I could spend all day back in the Library I'll quit altogether and go back to typing all day. Moving to AM has opened up more Library time for me and the purpose of all this was to make more money. I would definitely use it.

Hey y'all! I'm back in the Kitchen listening to Bobby Brown sing "Humpin' Around" on C3PO.

We just finished serving breakfast and now I have a long wait until lunch starts - yet we're required to sit in here till then, and as I've previously mentioned, we're technically not supposed to bring a book - or anything - here to pass the time. Yeah right.

I'm actually glad I'm not working in the Dishroom on Pots & Pans right now 'cause the dish machine is broken so they're having to wash everything by hand (with Pots & Pans helping). I haven't investigated, ('cause sometimes ignorance really is bliss), but I was told that they're just spraying off the trays and such with water, then swishing them around in soapy water, the disinfectant, and that's it. Not much actual wiping. <appropriate weird-faced emoji goes here>

In more kitchen-related news... the Food Service Administrator here is an incompetent jerk who doesn't want to do anything for inmates (e.g. - he wants to cut out all holiday meals). Well, he also doesn't know how to do his job. We've been serving pancakes and french toast and haven't had syrup for many, many weeks. Who likes pancakes with so syrup?

Thanks for writing! I worked on the transcription for your post. Your writing is wonderful and moving. Hope to hear more from you soon.