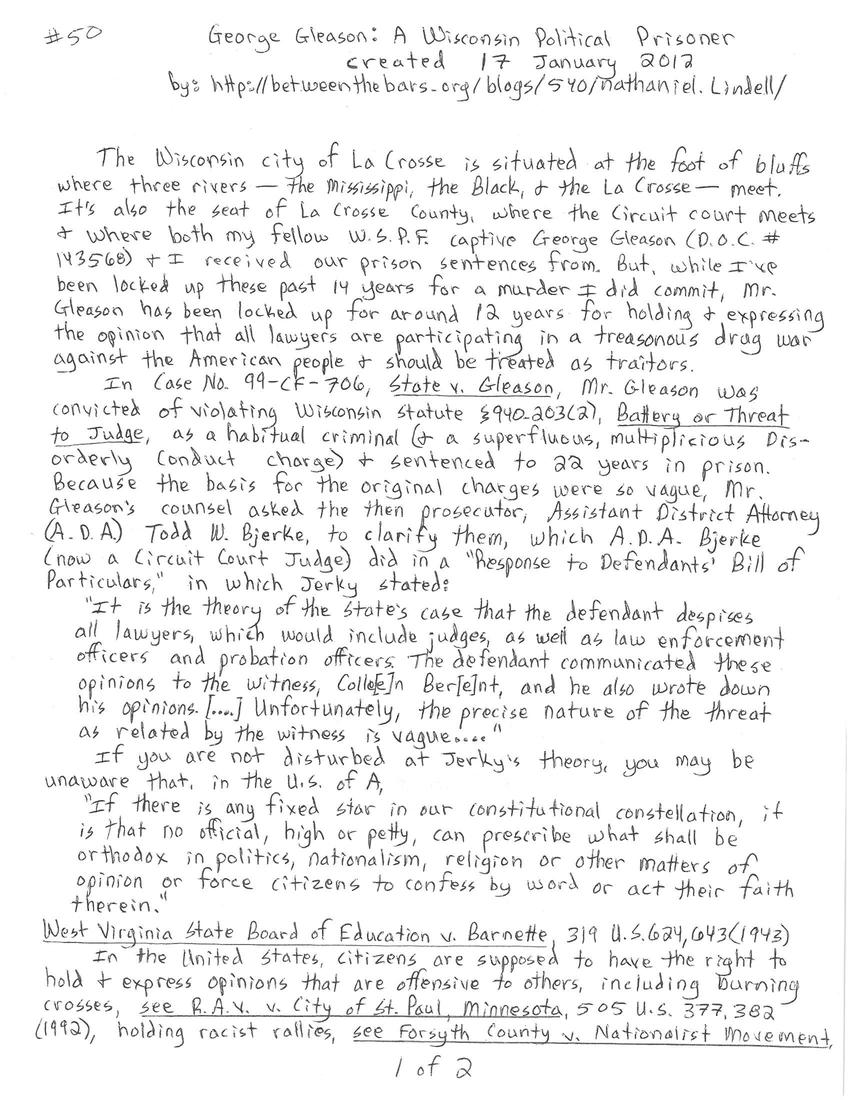 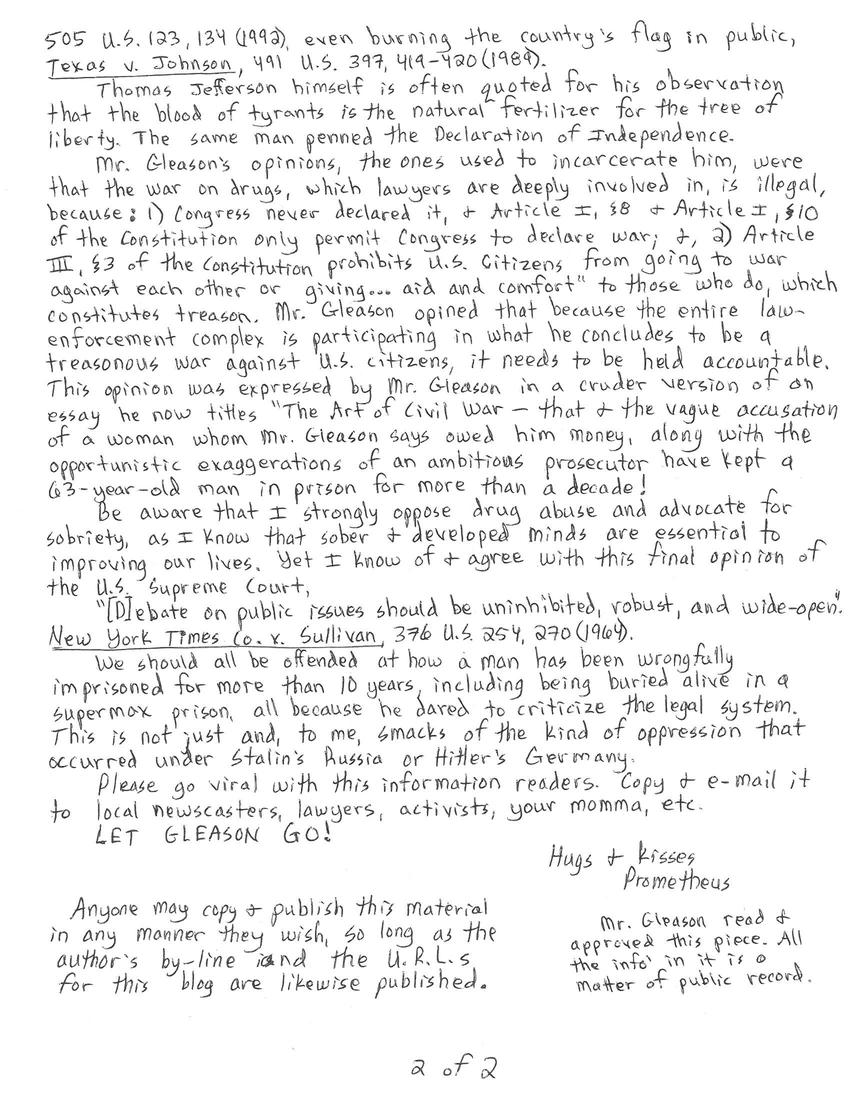 The Wisconsin cith of La crosse is situated at the oot of the bluffs
where three rivers - The Mississippi, the Black and La Crosse - meet.
It's also the seat of La Crosse county, where the circuit court meets
and where both my fellow W.S.P.F captive George Gleason (D.O.C #1Y3568)
and I received our prison sentences from. but, while I've
been locke dup these past 17 years for a murder I did commit, Mr
Gleason has been locked up for around 12 years for holding and expressing
the opinion that all lawyers are participating in a treasonous drag war
agianst the American people and should be treated as traitos.

In Case No 99-CF-706, State V Gleason, Mr Gleason was
convicted of violating ~Wisconsin statute S940-203(2), Battery or Threat
to judge, as a habitual criminal (and a superflous,multiplicious disorderly
conduct charge) and sentenced to 22 years in prison.
Because the basis for the original charges were so vague, Mr
gleason's counsel asked the then prosecutor, Assistant District Attorney
(A.D.A). Todd W. Bjerke, to clarify them, which A.D.A. Bjerke
(now a Circuit Court Judge) did in a "Response to Defendants' Bill of
Particulars", in which Jerky stated:

"It is the theory of the state's case that the defendent despises
all lawyers, which would include judges, as well as law enforcement
officers and probation Officers. The Defendent communicated these
opnions to the witness, Colle(e)n Ber(e)nt, and he also wrote down
his opnions. (.....). Unfortunately, the precuse nature of the threat
as related by the witness i vague...."

If you are not disturbed at Jerky's theory, you may be
unaware that, in the U.S. of A,

"If there is any fixed star in our constitutional constellation, it
is that no offical, hugh or petty, can prescribe what shall be
orthodox in politics, nationalism, religion or other matters of
oinion orforce citizens to confess by word or act their faith
theirin".

Thomas Jefferson himself is often quoted for his observation
tha tthe blood of tyrants is the natural fertilizer for the tree of
liberty. The same man penned the Declaration of independence.

Mr Gleason's opnions, the ones use dto incarcerate him, were
that the war on drugs, which lawyers are deeply involved in, it illegal,
because:

1) Congress never declared it, and Article 1, S8 and ~Article 1, S10
of the constutution only permit congress to declare war; and

2) Article 3, S3 of the constitution prohibits U.S. citizens from going to war
agiant each other or gving... aid and comfort" to thse who do, which
constittes treason. Mr Gleason opined that because the entire law-enforcement
complex is participating in what he concludes to be a
treasonous war aginast U.S. citizens, it needs to be held accountable.
This opnion was expressed by Mr Gleason in a cruder version of an
essay he now titles ~"The Art of Civil War - that and the vague accusation
of a woman whom Mr Gleason saus owed him moeny, along with the
opportunistic exaggerations o an ambitous prosecutor have kept a
63 year old man in prison for more than a decade!

Be aware that I stringly oppose drug abuse and advoate for
sobriety, as I know that sober and developed minds are essential to
improving our lives. Yet I know of and agree with this final opinion of
the U.S. Supreme Court.

e should all be offended at how a man has been wrongfully
imprisoned for more than 10 years, including being buried alive in a
supermax prison, all bdecause he daared to criticize the legal system.
This is not jus tand, to me, smacks of the kind of opression that
occurred undr Stalin's Russia or Hitler's Germany.

anyone may copy and publish this material
in any manner they wish, so long as the
author's by-line and the URL's for this blog
are likewise published.

Mr Gleason read and approved this piece.
all the information in it is a matter opublic record.

Thanks for writing! I finished the transcription for your post.
I was there it was a total injustice what they did to George and I tell everyone I can. Never seen the Constitution so violated. He should sue big time.