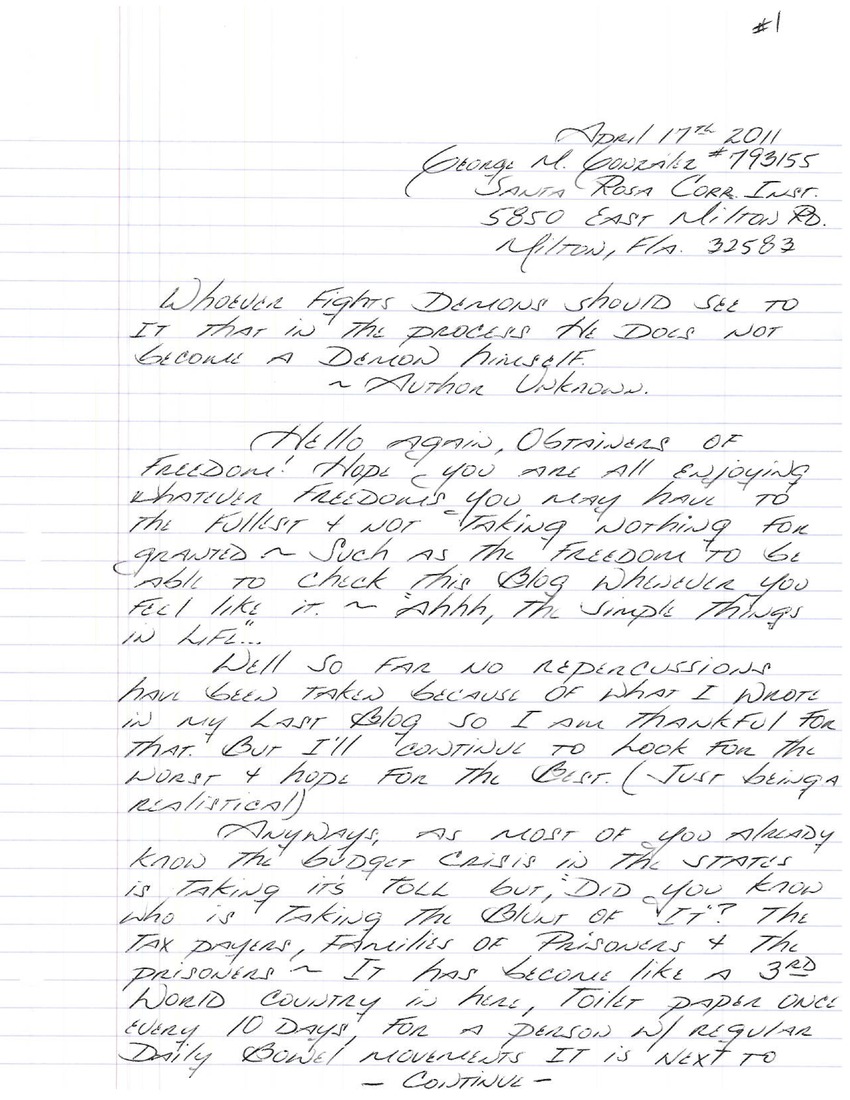 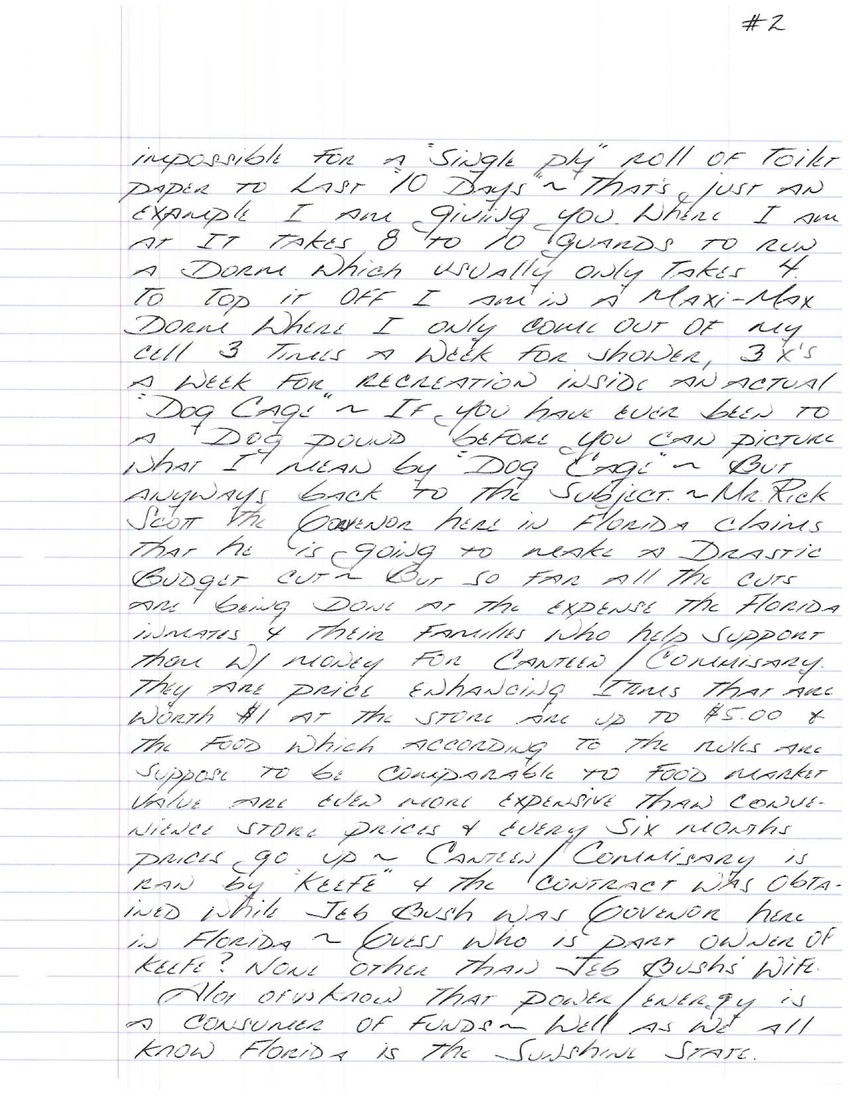 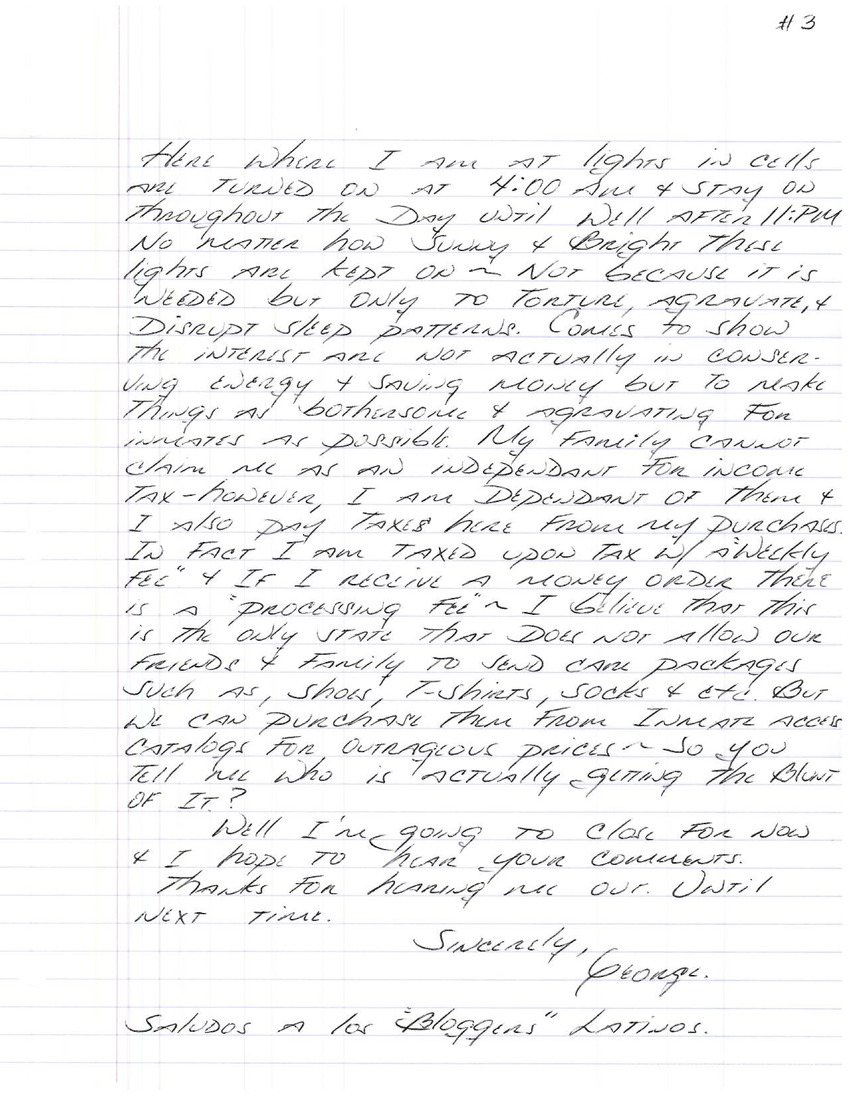 Whoever fights demons should see to it that in the process he does not become a demon himself.
—Author unknown

Hello again, obtainers of freedom! Hope you are all enjoying whatever freedoms you may have to the fullest and not taking nothing for granted. Such as the freedom to be able to check this blog whenever you feel like it. Ahh, the simple things in life.

Well, so far no repercussions have been taken because of what I wrote in my last blog, so I am thankful for that. But I'll continue to look for the worst and hope for the best. Just being a realist.

Anyways, as most of you already know, the budget crisis in the states is taking its toll but did you know who is taking the blunt of it? The taxpayers, families of prisoners, and the prisoners. It has become like a third world country in here. Toilet paper once every thirteen days for a person with regular bowel movements. It is next to impossible for a single ply roll of toilet paper to last ten days. That's just an example I am giving you. Where I am at, it takes eight to ten guards to run a dorm which usually only takes four. To top it off I am in a maxi-max form where I only come out of my cell three times a week for shower, three times a week for recreation inside an actual dog cage. If you have ever been to a dog pound before, you can picture what I mean by dog cage. But anyways back to the subject.

Mr. Rick Scott, the governor here in Florida, claims that he is going to make a drastic budget cut. But so far all the cuts are being done at the expense of the Florida inmates and their families who help support them with money for canteen/commissary. They are price enhancing items that are worth $1 at the store are up to $5, and the food which according to the rules are supposed to be comparable to food market value are even more expensive than convenience store prices. And every six months, prices go up.

Canteen/commissary is ran by Keefe, and the contract was obtained while Jeb Bush was governor here in Florida. Guess who is part owner of Keefe? None other than Jeb Bush's wife.

A lot of us know that power/energy is a consumer of funds. Well, as we all know, Florida is the sunshine state. Here, where I am at lights in cells are turned on at 4:00 AM and stay on throughout the day until well after 11:00 PM, no matter how sunny and bright, these lights are kept on. Not because it is needed but only to torture, aggravate, and disrupt sleep patterns. Comes to show that the interests are not actually in conserving energy and saving money but to make things as bothersome and aggravating for inmates as possible.

My family cannot claim me as an independent for income tax, however, I am dependent of them and I also pay taxes here from my purchases. In fact, I am taxed upon tax with a "weekly fee", and if I receive a money order there is a processing fee. I believe that this is the only state that does not allow our friend and family to send care packages such as shoes, T-shirts, socks, and so forth. But we can purchase them from inmate access catalogs for outrageous prices. So you tell me: who is actually getting the blunt of it?

Well, I'm going to close for now and I hope to hear your comments. Thanks for hearing me out. Until next time.