Hello Out There Free World! 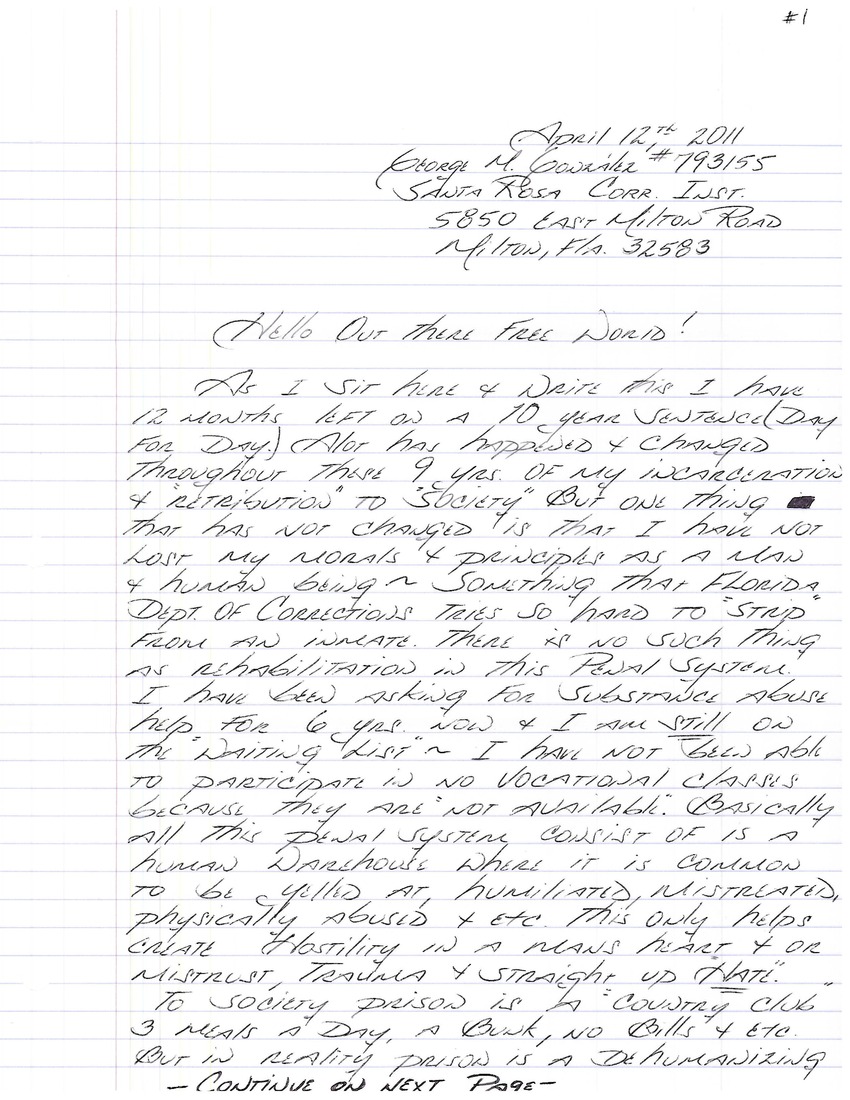 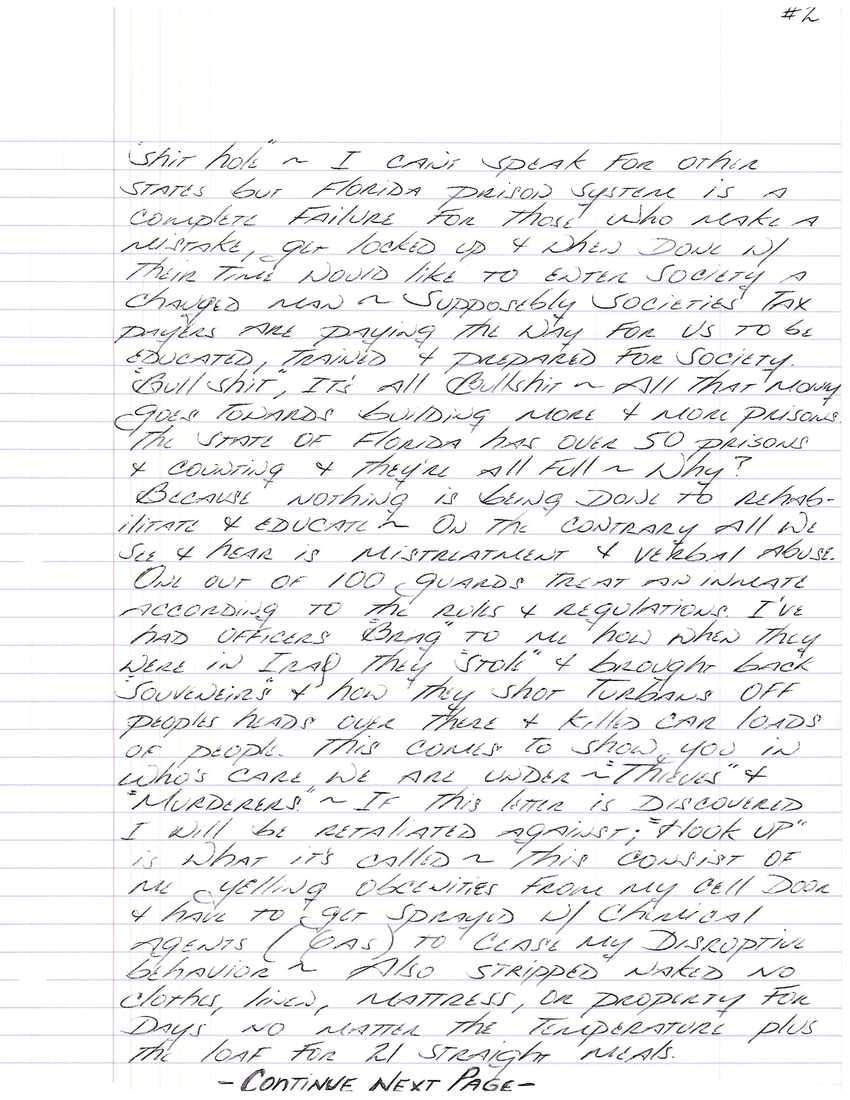 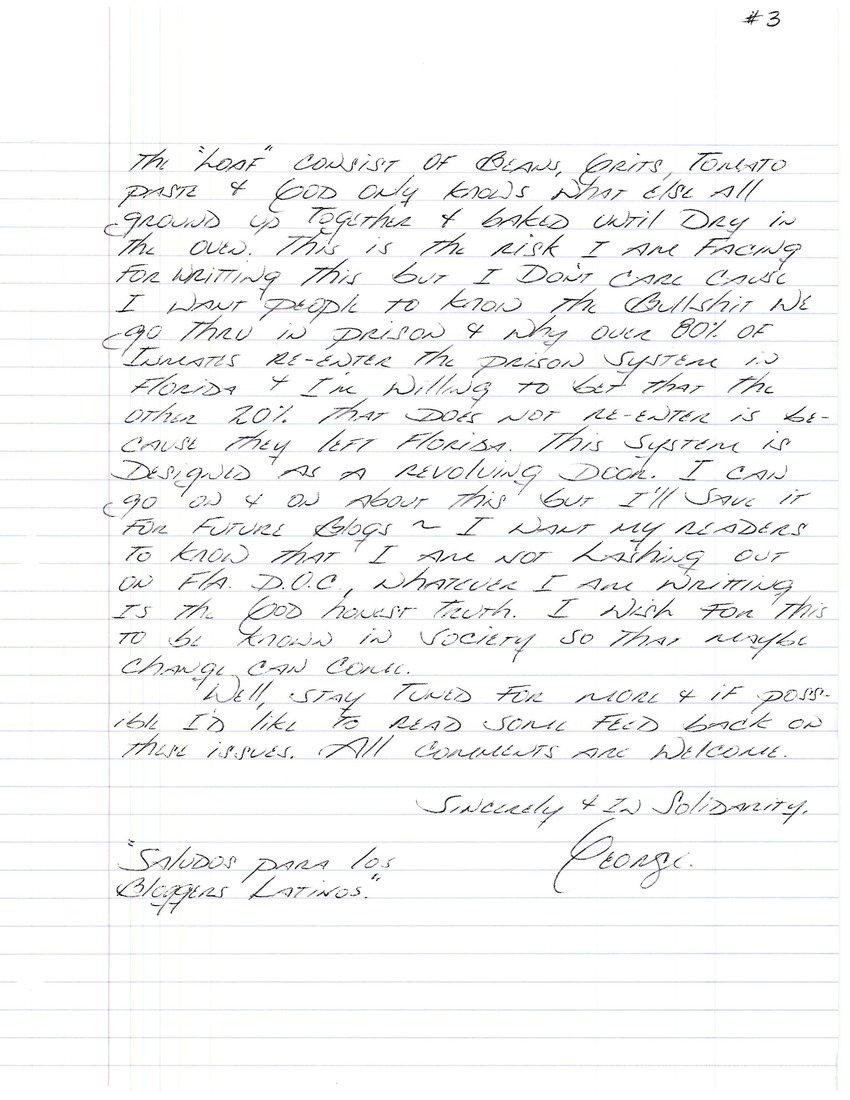 Hello out there, free world!

As I sit here and write this, I have 12 months left on a 10 year sentence (day for day). A lot has happened and changed throughout those nine years of my incarceration and retribution to society. But one thing that has not change is that I have not lost my morals and principles as a man and human being—something that Florida Department of Corrections tries so hard to strip from an inmate.

There is no such thing as rehabilitation in this penal system. I have been asking for substance abuse help for six years now, and I am still on the waiting list. I have not been able to participate in no vocational classes because they are "not available." Basically, all this penal system consists of is a human warehouse where it is common to be yelled at, humiliated, mistreated, physically abused, and so on. This only helps create hostility in a man's heart, and or mistrust, trauma and straight up hate.

To society, prison is a country club, three meals a day, a bunk, no bills, and so on. But in reality, prison is a dehumanizing shit hole. I can't speak for other states, but the Florida prison system is a complete failure for those who make a mistake, get locked up and, when done with their time, would like to enter society as a changed man. Supposedly society's taxpayers are paying the way for us to be educated, trained, and prepared for society's bullshit. It's all bullshit. All that money goes towards building more and more prisons. The state of Florida has over 50 prisons and counting, and they're all full. Why? Because nothing is being done to rehabilitate and educate.

On the contrary, all we see and hear is mistreatment and verbal abuse. One out of 100 guards treat an inmate according to the rules and regulations. I've had officers brag to me how when they were in Iraq, they stole and brought back souvenirs, and how they shot turbans off people's heads over there, and kill car loads of people. This comes to show you in who's care we are under: thieves and murderers.

If this letter is discovered, I will be retaliated against. "Hook up" is what it's called. This consists of me yelling obscenities from my cell door and have to get sprayed with chemical agents (gas) to cleanse my disruptive behavior. Also stripped naked—no clothes, linen, mattress, or property for days, no matter the temperature plus the loaf for 21 straight meals. The "loaf" is beans, grits, tomato paste, and God only knows what else all ground up together and baked until dry in the oven.

This is the risk I am facing for writing this, but I don't care 'cause I want people to know the bullshit we go through in prison and why over 80% of inmates re-enter the prison system in Florida. I'm willing to bet that the other 20% that does not re-enter is because they left Florida. This system is designed to be a revolving door. I can go on and on about this, but I'll save it for the future blog posts.

I want my readers to know that I am not lashing out on the FL DOC. Whatever I am writing is the God honest truth. I wish for this to be known in society so that maybe change can come.

Well, stay tuned for more and if possible, I'd like to read some feedback on these issues. All comments are welcome.

Sincerely and in solidarity,
George

Loving you is one of the best things i ever done .your a great man don't let your pass destroy your present leave behind all negative vibes don't let the public judge you for what you did in your pass or for who you are in your present .think of what freedom has to offer you make the right choices in life and you see t great things life has to offer you .dont change for nobody be who you are .if you want to better your self for you not for society that will make your life more easier.remember we all have a mind of our own you cant change the way people think about you.but you could change the way you think about your self.all i ask you please don't forget about our love .the promise you made me .