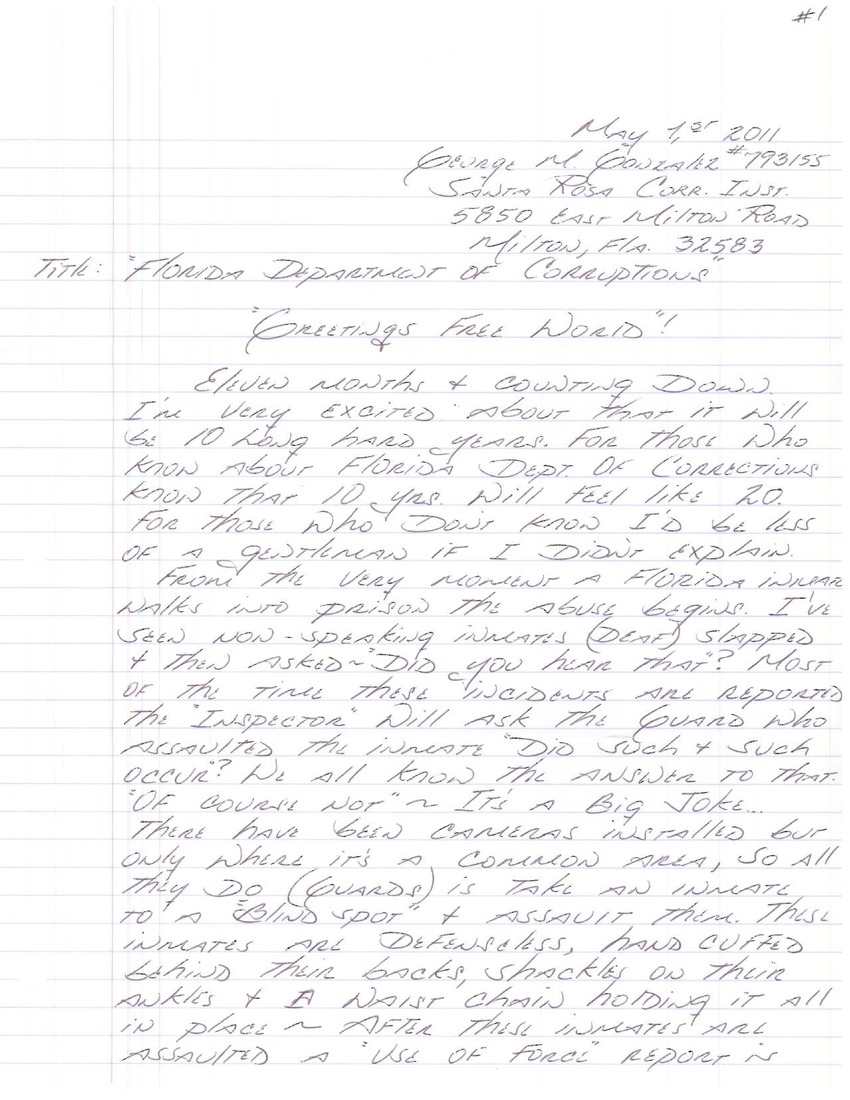 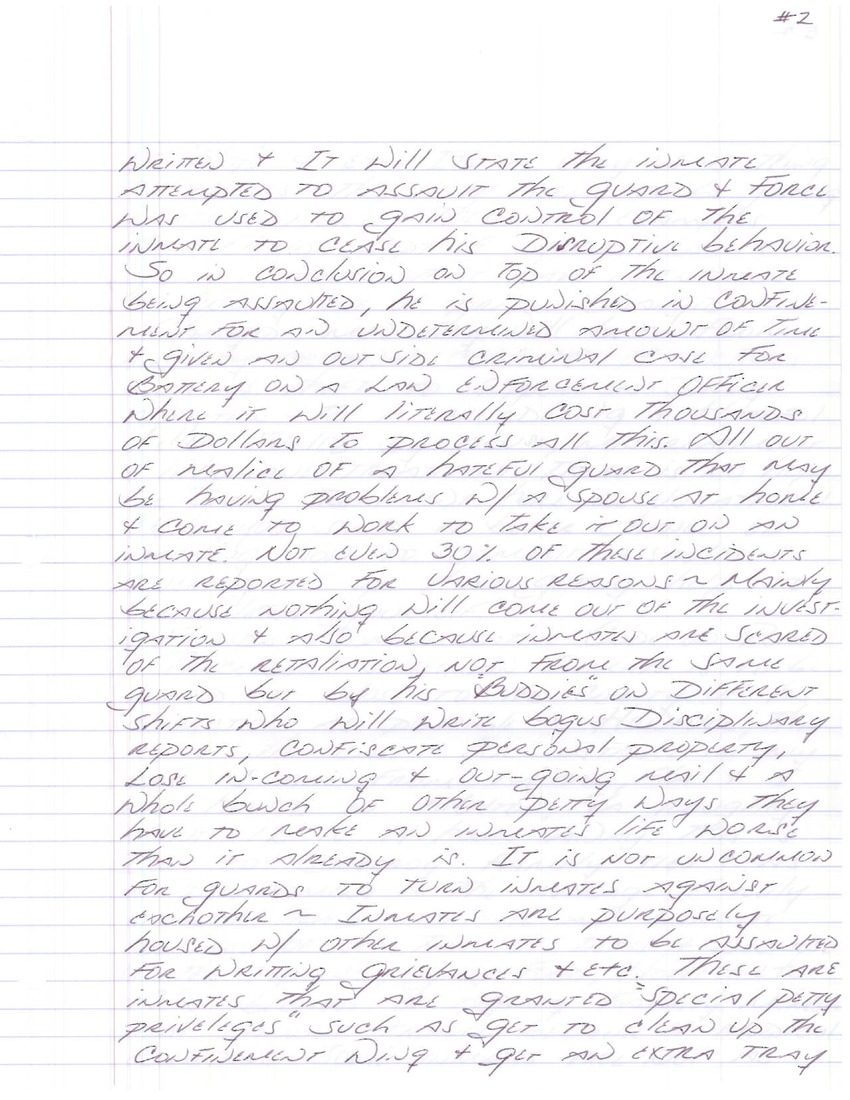 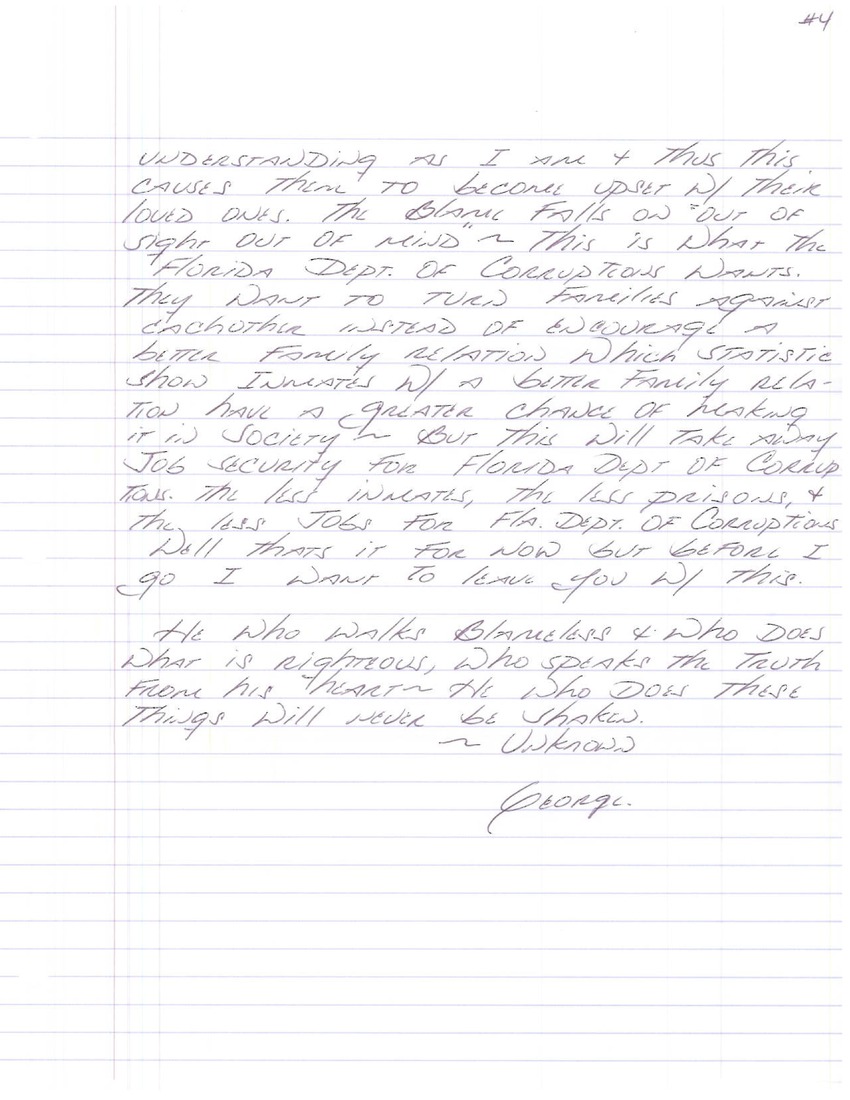 Eleven months and counting down. I'm very excited about that it will not be ten long hard years. For those who know about Florida Dept. or Corrections know that ten years will feel like twenty. For those who don't know, I'd be less of a gentleman if I didn't explain.

From the very moment a Florida inmate walks into prison, the abuse begins. I've seen non-speaking inmates (deaf) slapped and then asked, "Did you hear that?" Most of the time these incidents are reported the "inspector" will ask the guard who assaulted the inmate, "Did such and such occur?" We all know the answer to that. "Of course not." It's a big joke.

There have been cameras installed but only where it's a common area, so all they do (guards) is take an inmate to a blind spot and assault them. These inmates are defenseless, handcuffed behind their backs, shackles on their ankles, and a waist chain holding it all in place. After these inmates are assaulted a "use of force" report is written and it will state the inmate attempted to assault the guard and force was used to gain control of the inmate to cease his disruptive behavior.

So in conclusion, on top of the inmate being assaulted, he is punished in confinement for an undetermined amount of time and given an outside criminal case for battery on a law enforcement officer where it will literally cost thousands of dollars to progress all this. All out of malice of a hateful guard that may be having problems with a spouse at home and coming to work to take it out on an inmate.

Not even 30% of these incidents are reported for various reason, mainly because nothing will come out of the investigation and also because inmates are scared of the retaliation, not from the same guard but by his "buddies" on different shifts who will write bogus disciplinary reports, confiscate personal property, lose incoming and outgoing mail, and a whole bung of other petty ways they have to make an inmate's life worse than it already is. It is not uncommon for guards to turn inmates against each other. Inmates are purposely housed with other inmates to be assaulted for writing grievances and so forth. These are inmates that are granted "special petty privileges" such as getting to clean up the confinement wing and get an extra tray understanding as I am, and thus this causes them to become upset with their loved ones. The blame falls on "out of sight mind".

Well, that's it for now, but before I go, I want to leave you with this:

He who walks blameless and who does what is righteous, who speaks the truth from his heart, he who does these things will never be shaken.
—Unknown

you are full of it georgie was released only to continue to be a career criminal in the streets of miami. he will be right back in that revolving door. an abusive womanizer, cheet, pimp, crack head, drug dealer, but a damn good writer, yes he got the gift to gab that is for sure. it is a shame that people who deserve a second chance may not get it cause of people like george who mess that up.
Am I glad I didn't move in with you to your sister as you asked me too. If you did what you did to me 20 years ago definitely you would of done it again to me. You're never gonna change... Your letters are so convincing when in there, but when you hit the real world you just can't seem to control yourself. I pray for you Georgie and always you'll be in heart forever. I can't believe with all the years in & out of that place you still haven't learned you lesson. I'm really disappointed in you.
You know who,
long lost love
wow I could of been another victim, god works im mysterious ways. And YOUR back in omg
Hey George, Hope your doing well ... I came across your blog on line ..I was looking up your name and found your letters .. You write so we'll .. Not many nice thing people said about you in there comments.. I know you are a kind , loving ,smart and generous person.. I also know you had your issues and it made u do bad things..At the time you didn't care who you hurt to get what you wanted to feed your addiction.. They government should of been helping you in a program instead of just putting you away... You are old enough to be a man and have control of yourself and fight those demons.. We went through our good and bad times .., I loved you very much and I'm not going to tell you who I am ,let's see how smart you yoyi..I hope you get this letter. Write back take care .. re