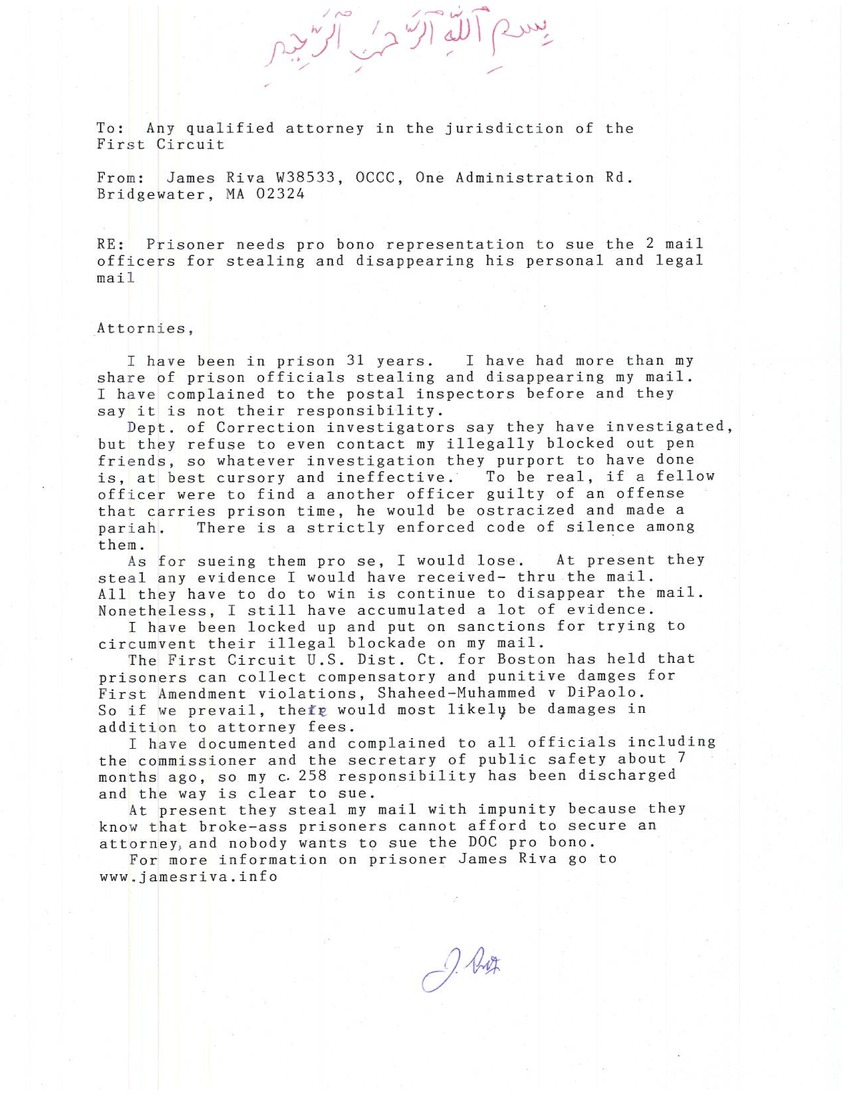 To: Any qualified attorney in the jurisdiction of the First Circuit

RE: Prisoner needs pro bono representation to sue the 2 mail officers for stealing and disappearing his personal and legal mail

I have been in prison 31 years. I have had more than my share of prison officials stealing and disappearing my mail. I have complained to the postal inspectors before and they say it is not their responsibility.
Dept. of Correction investigators say they have investigated, but they refuse to even contact my illegally blocked out pen friends, so whatever investigation they purport to have done is, at best cursory and ineffective. To be real, if a fellow officer were to find another officer guilty of an offense that carries prison time, he would be ostracized and made a pariah. There is a strictly enforced code of silence among them.
As for suing them pro se, I would lose. At present they steal any evidence I would have received - thru the mail. All they have to do to win is continue to disappear the mail. Nonetheless, I still have accumulated a lot of evidence.
I have been locked up and put on sanctions for trying to circumvent their illegal blockade on my mail.
The First Circuit U.S. Dist. Ct. for Boston has held that prisoners can collect compensatory and punitive damages for First Amendment violations, Shaheed-Muhammed v DiPaolo. So if we prevail, there would most likely be damages in addition to attorney fees.
I have documented and complained to all officials including the commissioner and the secretary of public safety about 7 months ago, so my c. 258 responsibility has been discharged and the way is clear to sue.
At present they steal my mail with impunity because they know that broke-ass prisoners cannot afford to secure an attorney, and nobody wants to sue the DOC pro bono.
For more information on prisoner James Riva go to www.jamesriva.info