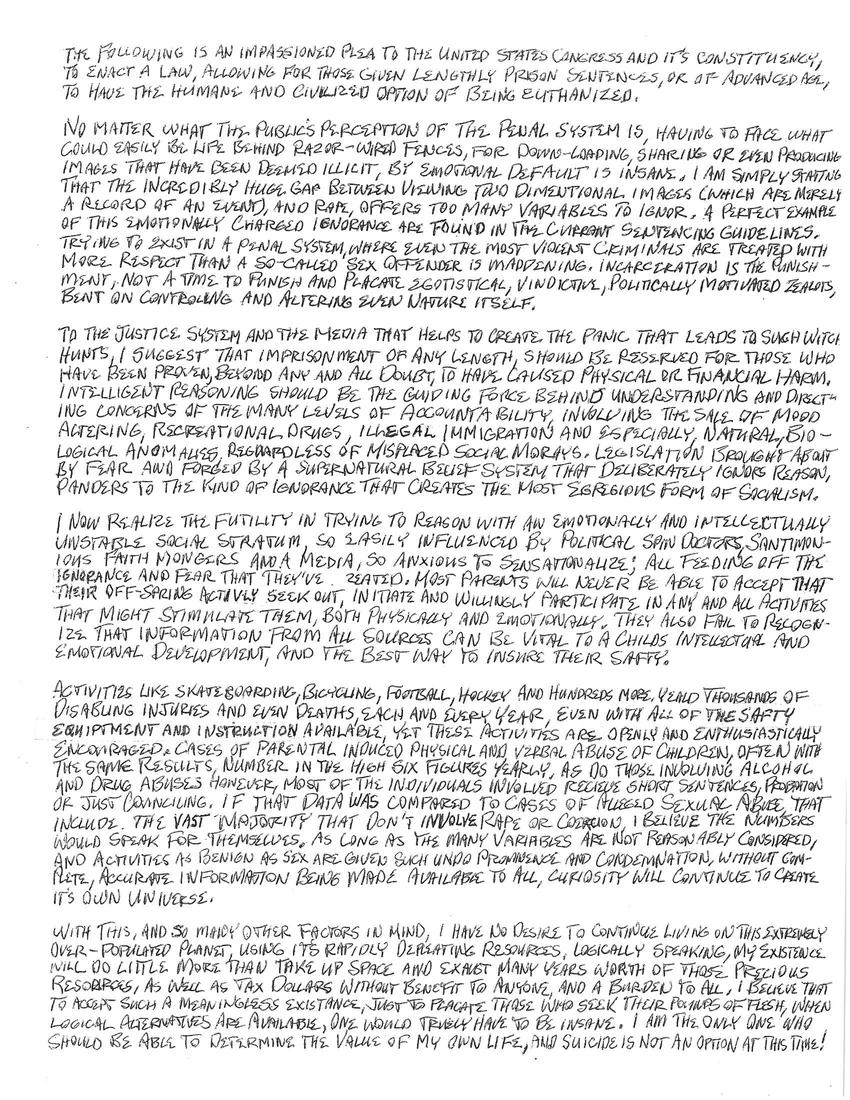 The following is an impassioned plea to the United States Congress and it's constituency to eanct a law, allowing for thise given lengthy prison sentence, or of advaned age. to have the humane and civilised option of being euthanised.

No matter what the public's perception of the penal sustem is having to face what could easily be life behind razor-wired fences, for down-loading, sharing or even producing images that have been deemed illicit, by emotional default is insane, I am simply stating that the incredibly huge gap between viewing two domentional images (which are merely a record of a event), and rape, offers too many variables to ignore, a perfect example of this emotionally charged ignorance are found in the currant sentencing guidelines. Trying to exist in a penal system, where even the most violet criminals are treated with more respect that a so-called sex offender is madening, incarceration is the punishment, not a time to punish and placate egotistical, vindictive, politically motivated zealots, bent on controling and altering even nature itself.

To the justice system and the media that helps to create the panic that leads to such witch hunts, I suggest that imprisonment of any length, should be reserved for those who have been proven, beyond and and all doubt, to have caused physical or financial harm. Intelligent reasoning should be the guiding force behind understanding and directing concerns of the many levels of accountability, invlovling the sale of mood altering, recreational drugs, illegal immigration and especially, natural, bio-logical anomaliss, regardlss of misplaced social morays, legislation brought about by fear and forged by a supernatiral belief system that deliberately ignores reason, panders to the kind of ignorance that creates the most serious form of socialism.

I now relate the futility in trying to reason with an emotionally and intellectually unstable social stratum so easily influenced by political spin doctors, sanctimonious faith mongers and a media, so anxious to sensationalize; all feedng off the ignornace and fear that they've created. Most parents will never be able to accept that their off-spring actively seek out, initiate and willingly participate in any and all activities that might stimulate them, both physically and emotionally. They also fail to recognise that information from all sources can be vital to a childs intellectual and emotional development, and the best way to insure their safety.

Activities like skateboarding, bicycling, football, hockey and hundreds more, yield thousands of disabling injuries and even deaths, each and every year, even with all of the safety equipment and instruction avialable, yet these activities are openly and enthusiastically encouraged. Cases of parental induced physical and verbal abuse of children, often with the same results, number in the hugh six figures yearly, as do those involving alcohol and drug abuses however, most of the individuals involved receive short sentenes, probation or just counciling. If that data was compared to cases of alledged sexual abuse that include the vast majorty that don't involve rape or coercion, I believe the numbers would speak for themselves. As long as the many variables are not reasonably considered, and activities as benign as sex are given sucg undo prominence and condemnation, without complete, accurate information bein made available to all, curiosity will continue to create it's own universe.

with this, and so many other factors in mind, I have no desire to continue living on this extremely over populated planet, using it's rapidly depleating resources, logically speaking, my existance will do little more than take up space and exhaust many years worth of those precious respurces, as well as tax dollors without benefit to anyone and a burden to all, I believe that to accept such a meaningless existance, just to placate those who seek their pounds of flesh, when logical alternatives are available, one would truely have to be insane. I am the only one who should be able to determine the value of my life, and suicide is not an option at this time!

Thanks for writing! I finished the transcription for your post.
Here are some things I couldn't find the courage to tell you before: I can't imagine how daunting your futre must be for you. I won't even argue the truth. At every turn, you're going to be confronted with failure, as well as the temptation to give up. Don't! I beg that you insist on finding light some where.
And hell, if that light turns out to be an oncoming train, at least no one can say you didn't try. Right?