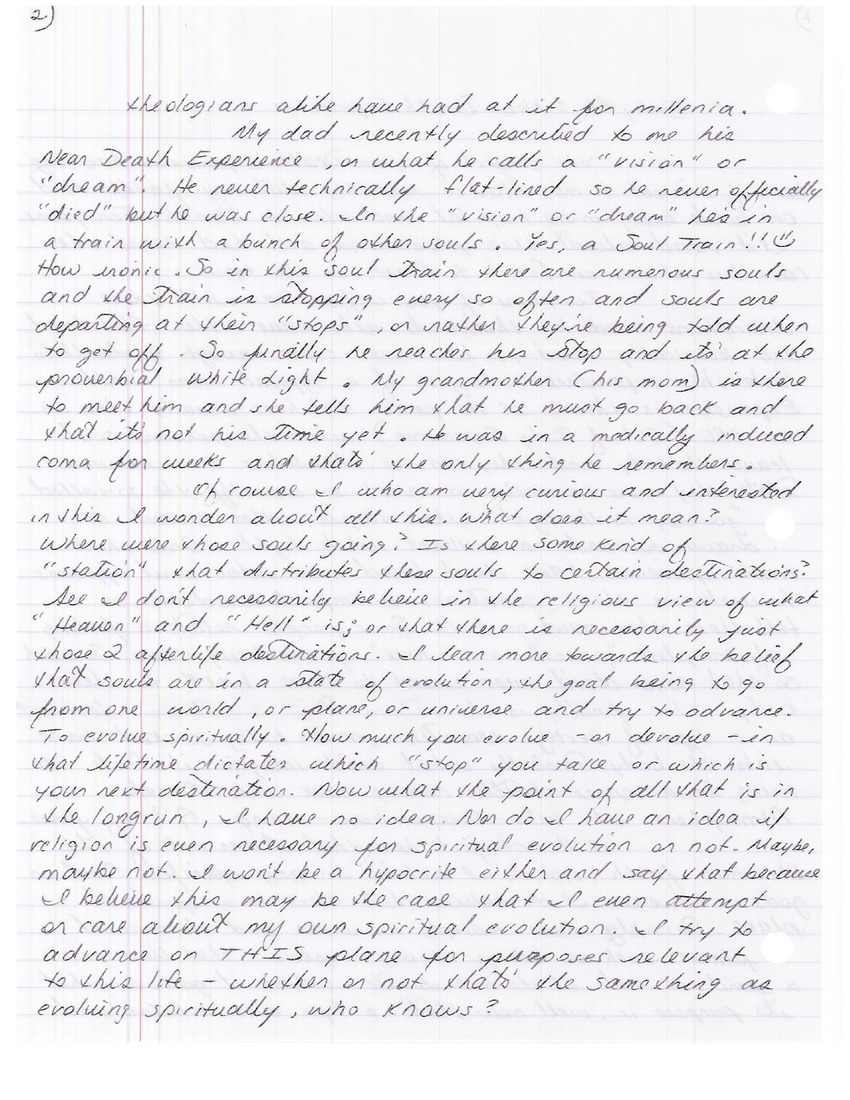 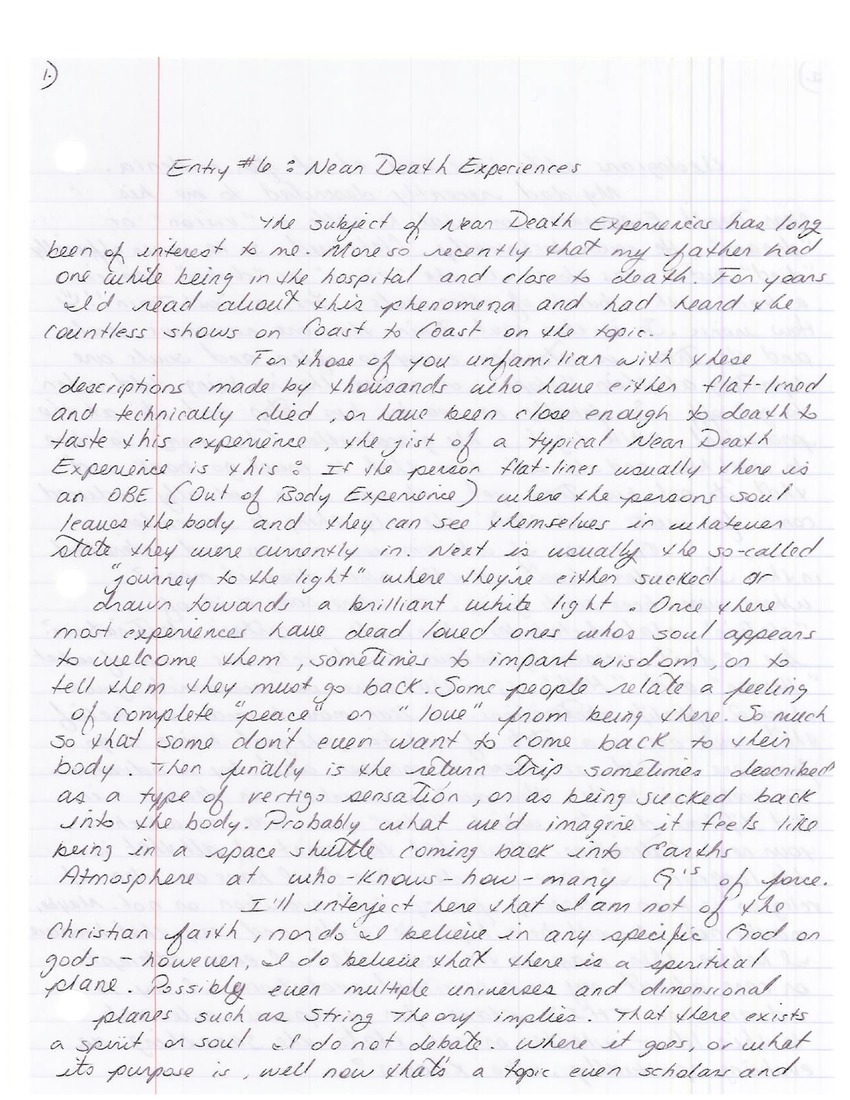 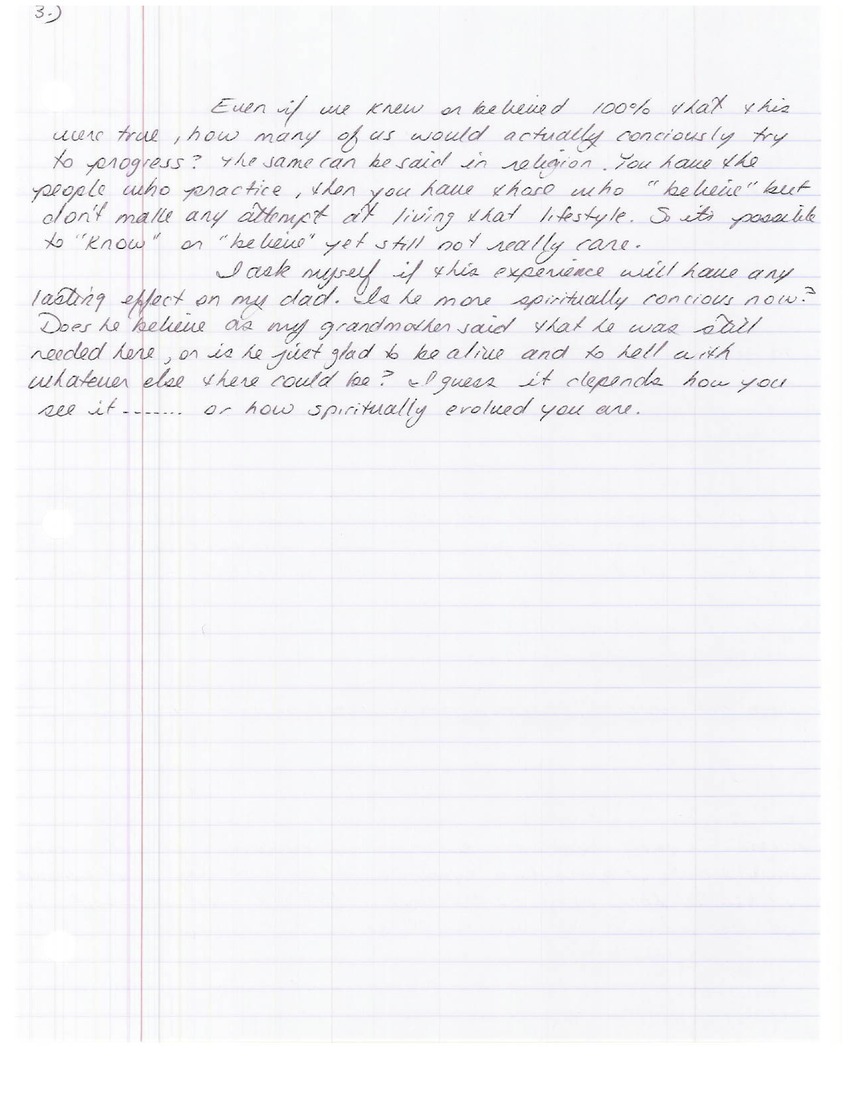 The subject of near death experiences has long been of interest to me. More so recently that my father had one while being in the hospital and close to death. For years I'd read about this phenomena and had heard the countless shows on Coast to Coast on the topic.
For those of you unfamiliar with these descriptions made by thousands who have either falt-lined and technically died, or have been close enough to death to taste this experience, the just of a typical near death experience is this: If the person falt-lines usually there is an OBE (Out of Body Experience) where the persons soul leaves the body and they can see themselves in whatever state they were currently in. Nexxt is usually the so-called "journey to the light" where they're either sucked or drawn towards a brilliant white light. Once there most experiences have dead loved ones whos soul appears to welcome them, sometimes to impart wisdom, or to tell them they must go back. Some people relate a feeling of complete "peace" or "love" from being there. So much so that some don't even want to come back to their body. Then finally is the return tri sometimes described as a type of vertigo sensation, or as being sucked back into the body. Probably what we'd imagine it feels like being in a space shuttle coming back into Earths Atmosphere at who-knows-how-many grams of force.
I'll interject here that I am not of the Chrsitian faith, nor do I believe in any specific God or gods - however, I do believe that there is a spiritual plane. Possibly even multiple universes and dimensional planes suh as string theory implies. that there exists a spirit or soul I do not debate. Where it goes, or what its purpose is, well not that's a topic even scholars and theologians alike have had at it for millenia.
My dad recently described to me his near death experience, or what he calls a "vision" or "dream". He never technically flat-lined so he never officially "died" but he was close. In the "vision" or "dream" he's in a train with a bunch of other souls. Yes, a soul train!! :) How ironic. So in this soul train there are numerous souls and the Train is stopping every so often and souls are depaerting at their "stops", or rather they're being told when to get off. So finally he reaches his stop and it's at the proverbial white light. My grandmother (his mom) is there to meet him and she tells him that he must go back and that its not his time yet. He was in a medically induced coma for weeks and taht's the only thing he remembers.
Of course I who am very curious and interested in this I wonder about all this. What does it mean? Where were those souls going? Is there some kind of "station" that distributes these souls to certain destinations? See I don't necessarily believe in the religious view of what "Heaven" and "Hell" is; or that there is necessarily just those 2 afterlife destinations. I lean more towards the belief that souls are in a state of evolution, the goal being to go from one world, or plane, or universe and try to advance. To evolved spiritually. How much you evolve - or devolve- in that lifetime dictates which "stop" you take or which is your next destination. Now what the point of all that is in the long run, I have no idea. Nor do I have an idea if religion is even necessary for spiritual evolution or not. Maybe, maybe not. I won't be a 'hypocrite either and say that because I believe this may be the case that I even attempt or care about my own spiritual evolution. I try to advance on THIS plane for purposes relevant to this life - whether or not that's the same thing as evolving spiritually, who knows? T