How Soon It Could End! 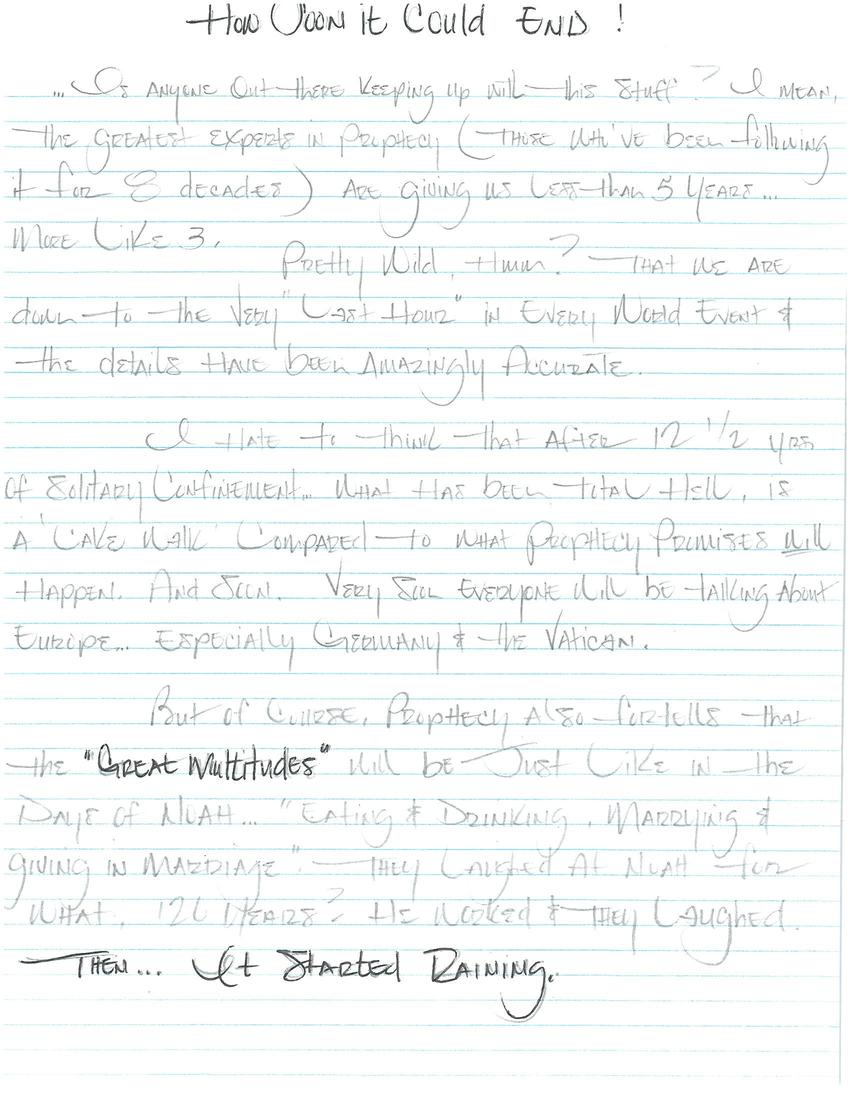 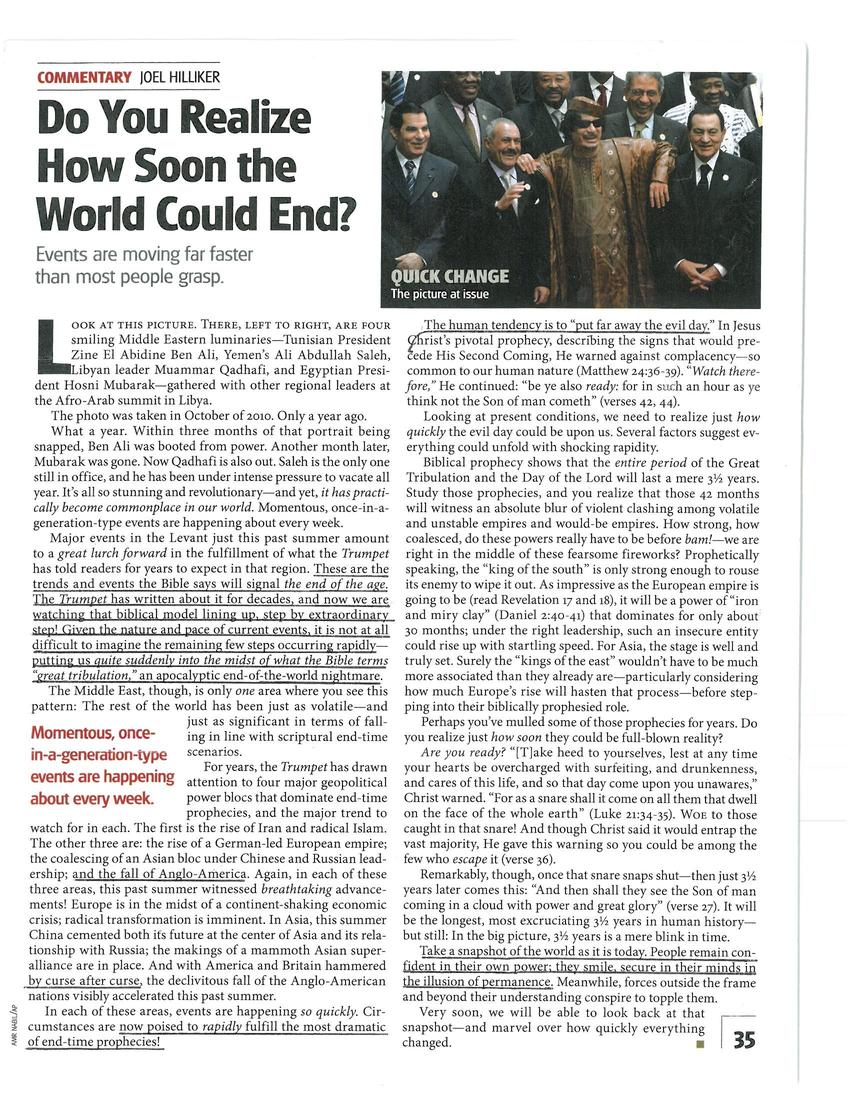 How Soon Could It End!

Is anyone out there keeping up with this stuff? I mean, the greatest experts in prophecy, those that who've been following for eight decades, are giving us less than five years. It's more like three.

Pretty wild, hmm? That we are down to the very "last hour" in every world event and the details have been amazingly accurate.

I hate to think that after 12 1/2 years of solitary confinement... that has been total hell... is a cake walk compared to what prophecy promises will happen. And soon, very soon, everyone will be talking about Europe. Especially Germany and the Vatican.

But of course, prophecy also foretells the "great multitudes" will be just like in the days of Noah. Eating and drinking, marrying and giving in to marriage. They laughed at Noah for what, 120 years? He worked and they laughed. Then, it started raining.

Commentary: JOEL HILLIKER
Do You Realize How Soon the World Could End?
Events are moving far faster than most people grasp.

What a year. Within three months of that portrait being snapped, Ben Ali was booted from power. Another month later, Mubarak was gone. Now Qadhafi is also out. Saleh is the only one still in office, and he has been under intense pressure to vacate all year. It’s all so stunning and revolutionary—and yet, it has practically become commonplace in our world. Momentous, once-in-a-generation-type events are happening about every week.

Major events in the Levant just this past summer amount to a great lurch forward in the fulfillment of what the Trumpet has told readers for years to expect in that region. These are the trends and events the Bible says will signal the end of the age. The Trumpet has written about it for decades, and now we are watching that biblical model lining up, step by extraordinary step! Given the nature and pace of current events, it is not at all difficult to imagine the remaining few steps occurring rapidly—putting us quite suddenly into the midst of what the Bible terms “great tribulation,” an apocalyptic end-of-the-world nightmare.

The Middle East, though, is only one area where you see this pattern: The rest of the world has been just as volatile—and just as significant in terms of falling in line with scriptural end-time scenarios.

For years, the Trumpet has drawn attention to four major geopolitical power blocs that dominate end-time prophecies, and the major trend to watch for in each. The first is the rise of Iran and radical Islam. The other three are: the rise of a German-led European empire; the coalescing of an Asian bloc under Chinese and Russian leadership; and the fall of Anglo-America. Again, in each of these three areas, this past summer witnessed breathtaking advancements! Europe is in the midst of a continent-shaking economic crisis; radical transformation is imminent. In Asia, this summer China cemented both its future at the center of Asia and its relationship with Russia; the makings of a mammoth Asian super-alliance are in place. And with America and Britain hammered by curse after curse, the declivitous fall of the Anglo-American nations visibly accelerated this past summer.

In each of these areas, events are happening so quickly. Circumstances are now poised to rapidly fulfill the most dramatic of end-time prophecies!

The human tendency is to “put far away the evil day.” In Jesus Christ’s pivotal prophecy, describing the signs that would precede His Second Coming, He warned against complacency—so common to our human nature (Matthew 24:36-39). “Watch therefore,” He continued: “be ye also ready: for in such an hour as ye think not the Son of man cometh” (verses 42, 44).

Looking at present conditions, we need to realize just how quickly the evil day could be upon us. Several factors suggest everything could unfold with shocking rapidity.

Biblical prophecy shows that the entire period of the Great Tribulation and the Day of the Lord will last a mere 3½ years. Study those prophecies, and you realize that those 42 months will witness an absolute blur of violent clashing among volatile and unstable empires and would-be empires. How strong, how coalesced, do these powers really have to be before bam!—we are right in the middle of these fearsome fireworks? Prophetically speaking, the “king of the south” is only strong enough to rouse its enemy to wipe it out. As impressive as the European empire is going to be (read Revelation 17 and 18), it will be a power of “iron and miry clay” (Daniel 2:40-41) that dominates for only about 30 months; under the right leadership, such an insecure entity could rise up with startling speed. For Asia, the stage is well and truly set. Surely the “kings of the east” wouldn’t have to be much more associated than they already are—particularly considering how much Europe’s rise will hasten that process—before stepping into their biblically prophesied role.

Perhaps you’ve mulled some of those prophecies for years. Do you realize just how soon they could be full-blown reality?

Are you ready? “[T]ake heed to yourselves, lest at any time your hearts be overcharged with surfeiting, and drunkenness, and cares of this life, and so that day come upon you unawares,” Christ warned. “For as a snare shall it come on all them that dwell on the face of the whole earth” (Luke 21:34-35). Woe to those caught in that snare! And though Christ said it would entrap the vast majority, He gave this warning so you could be among the few who escape it (verse 36).

Remarkably, though, once that snare snaps shut—then just 3½ years later comes this: “And then shall they see the Son of man coming in a cloud with power and great glory” (verse 27). It will be the longest, most excruciating 3½ years in human history—but still: In the big picture, 3½ years is a mere blink in time.

Take a snapshot of the world as it is today. People remain confident in their own power; they smile, secure in their minds in the illusion of permanence. Meanwhile, forces outside the frame and beyond their understanding conspire to topple them.

Very soon, we will be able to look back at that snapshot—and marvel over how quickly everything changed.