My Name Is Khan 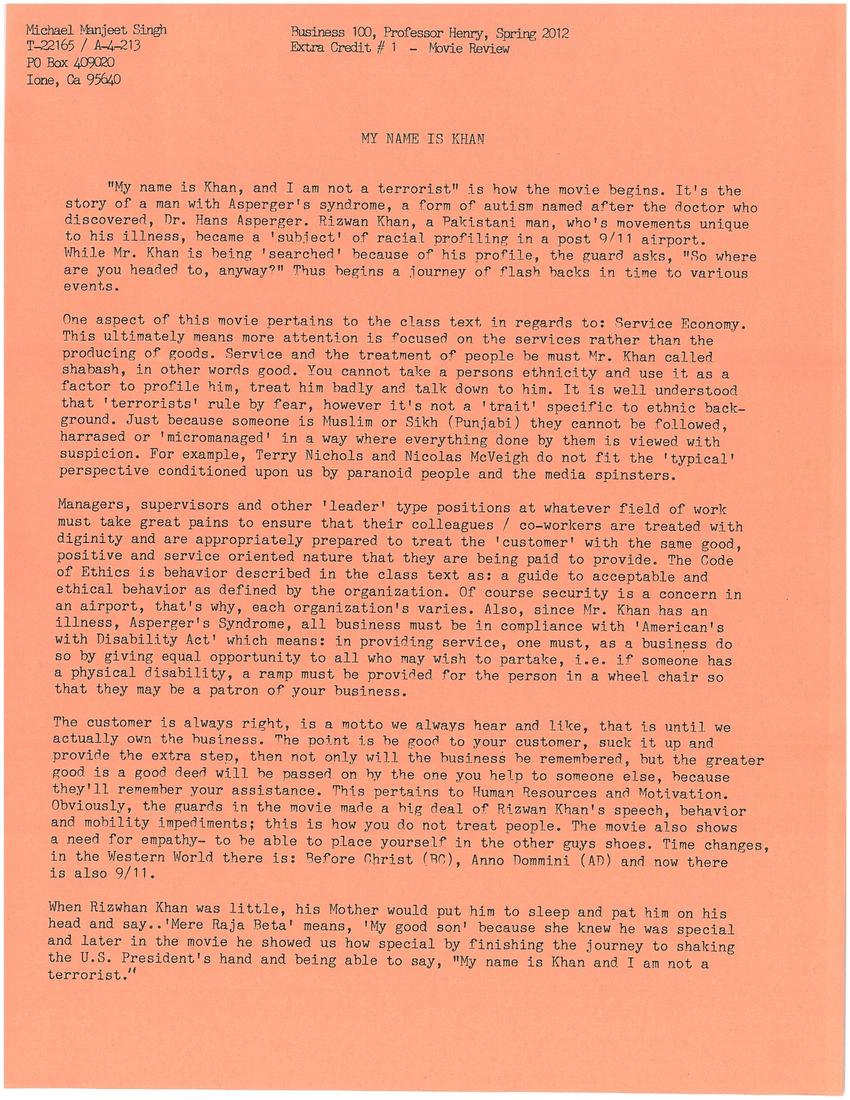 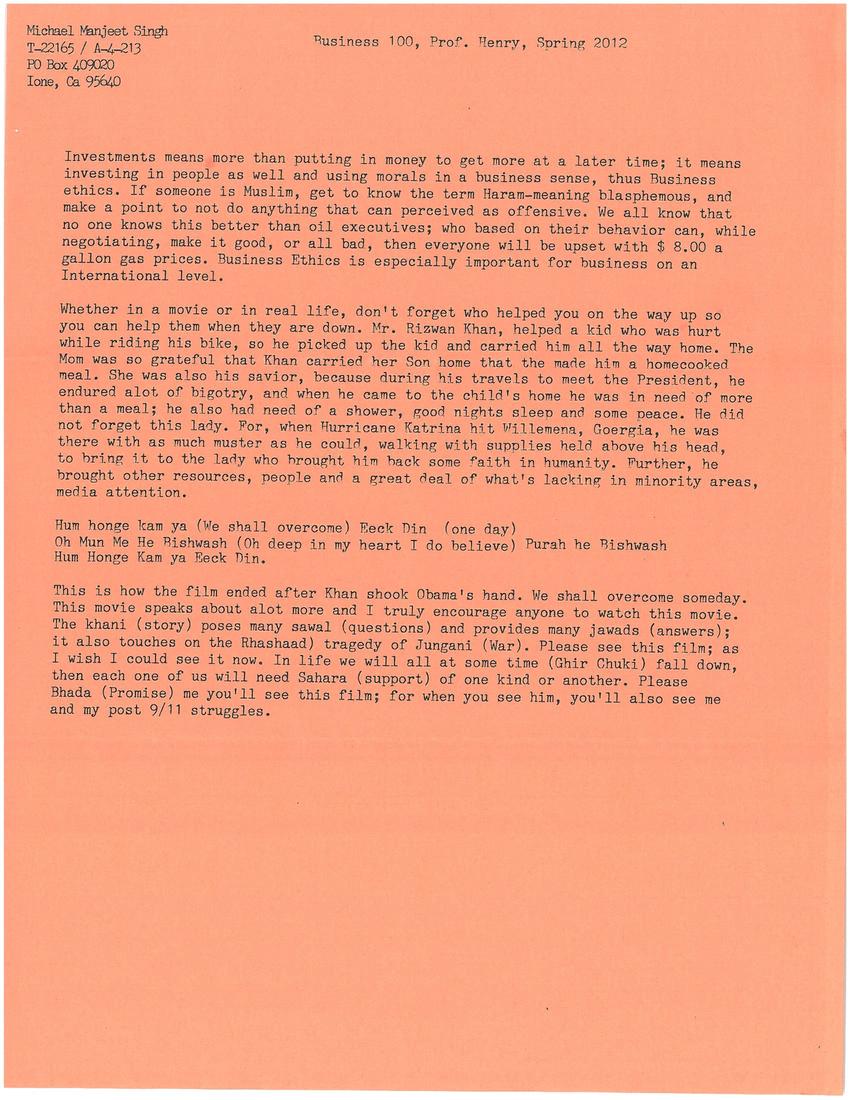 MY NAME IS KHAN

"My name is Khan, and I am not a terrorist" is how the movie begins. It's the story of a man with Aspeger's Syndrome, a form of autism named after the doctor who discovered, Dr Hans Asperger. Rizwan Khan, a Pakistani man, who's movements unique to his ilness, became a 'subject' of racial profiling in a post 9/11 airport. While Mr Khan is being 'searched' because of his profile, the guard asks, "So where are you headed to, anyway?" Thus begins a journey of flash backs in time to various events.

One aspect of this movie pertains to the class text in regards to: Service Economy. This ultimtely means more attention is focused on the services rather than the producing of goods. Service and the treatment of people be must Mr Khan called sabash, in other words good. You cannot take a persons ethnicity and use it as a factor to profile him, treat him badly and talk down to him. It is well understood that 'terrorists' rule by fear, however it's no a 'trait' specific to ethnic background. Just because someone is Muslim or Sikh (Punjabi) the cannot be followed, harrased or 'micromnaged' in a way where everything done by them is viewed with suspician. For example, terry Nichols and Nicolas Mcveigh do not fit the 'typical' perspective conditoned upon us by paranod people andthe media spinsters.

Managers. supervisors and other 'leader' type positions at whatever field of work must take great pains to ensure that their cooleagues/co-workers are treated with dignity and are appropriately prepared to treat the 'customer' with the same good, positive and service oriented nature that they are being paid to provide. The Code of Ethics is behavior described in the class text as: a guide to acceptable and ehtical behavior as defined by the organization. Of course security is a concern in an airport, that's why, each oganization's varies. Also, since Mr Khan has an illness, Asperger Syndrome, all buiness must be complaince with 'Amercan's with Disability Act' which means: in providing service, on must, as a business do so by giving equal opportunity to all who may wish to partake, i.e. if someone has a physical disability, a ramp must be pvided for the person in a wheel cchair so that they may be a patron fo your business.

The customer is always right, is a motto we always hear and like, that is until we actually own the business. The point is be good to your customer, suck it up and provide the extra step, then not only will the business he remembered, but the greater good is a good deed will be passed on my the one you help to someone else, because they'll remember your assistance. This pertain to Human Resources and Motivation. Obviously, the guards in the mivie made a big deal of rizwan Khan's speech, behaviour and mobility impediments; this is how you do not treat people. The movie also shows a need for empathy - to be able to place yourself in the other guys shoes. Time changes, in the ester World there is: Before Christ (RC), Anno Dommini (AD) and now there is also 9/11.

When Rizwan Khan was little, his Mother would put him to sleep and pat him on his head and say.. 'Mere Raja Beta' means, 'My good son' because she knew he was special and later in the movie he showed us how special by finishing the journey to shaking the U.S. President's hand and being able to say, "My name is Khan and I am not a terrorist".

Investments means more than putting in money to get more at a later time; it means investing in people as well and using morals in a business sense, this Business ethis, If someone is Muslim, get to know the term Haram-meaning blasphemous, and make apoint to not do anything that can perceived as offensive. We all know that no on knows this better than oil executives; who based on their behavior can, while negitiating, make it good, or all bad, then everyone will be upset wih $8.00 a gallon gas prices. Business Ethics is especially important for business on an Inernational level.

Whether in a movie or in real life, don't forget wo helped you on the way up so you can help them when they aredown. Mr Rizwan Khan, helped a kid who was hurt while riding his bike, so he picked up the kid and carried him all the way home. The Mom was so grateful that Khan carried her son home that the made him a homecooked meal. She was also his savior, because during his travels to meet the President, he endured alot o bigotry, and when he came to the child's home he wa sin need of more than a meal; he also had need of a shower, good nights sleep andsome peace. He did no forget this lady. for, when Hurricane Katrina hit Willemina, Georgia, he was there with as much muster as he could, walking with supplies held above his head to bring itto the lady who brought him back some faith in humanity. Further, he brought other resources, people and a great deal of what's lacking in minority areas, media attention.

Hum honge kam ya (we shall overcome) Eeck Din (one day)
Oh Mun Me He Bishwash (Oh deep in my heart I do believe) Purah he Bishwash Hum Honge Kam ya Eeck Din.

This is how the film ended after Khan shook Obama's hand. We shall overcome someday. This movie speaks about a lot more and I truly encourage anyone to watch this movie. The khani (story) poses many sawal (questions) and provides many jawads (answers); it also touches on the Rhashaad (tragedy) of Jungani (war). Please see this film; as I wish I could see it now. In life we will all at some time (Ghir Chuki) fall down, then each of us will need Sahara (support) of one kind or another. Please Bhada (promise) me you'll see this film; for when you see him, you'll also see me and my post-9/11 struggles.