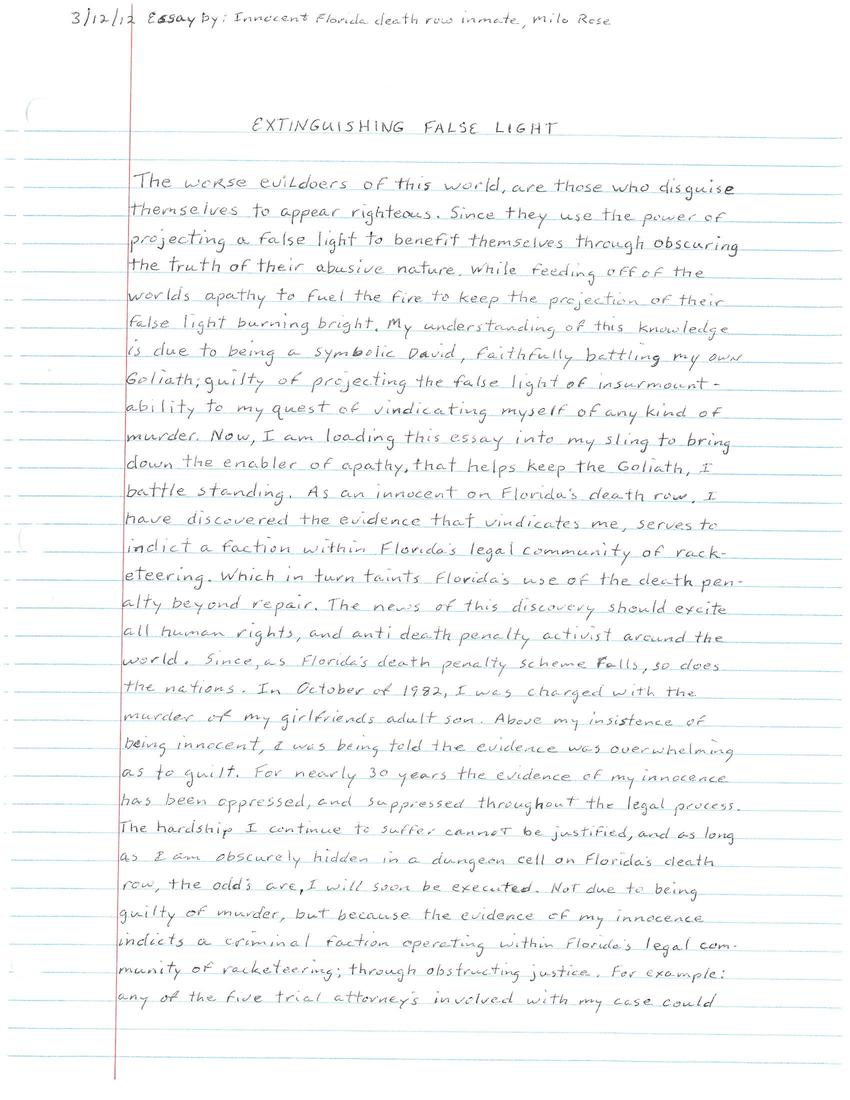 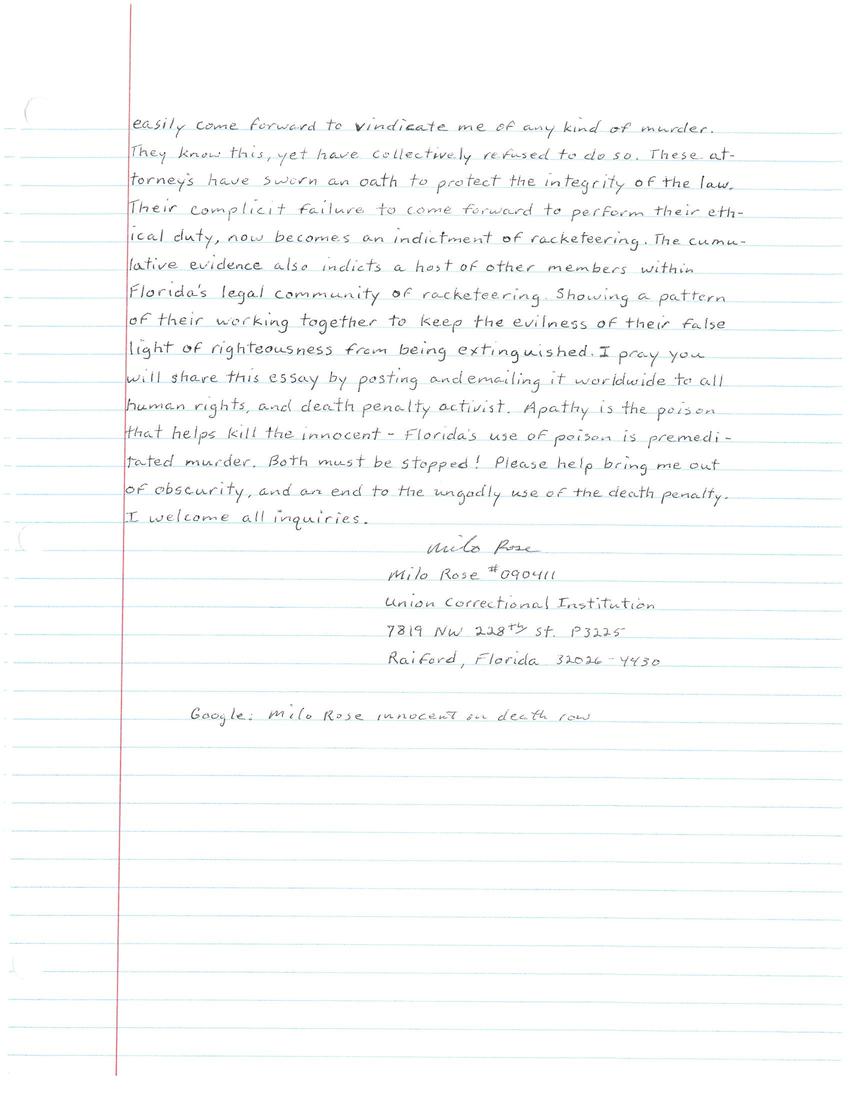 The worse evildoers of this world, are those who disguise themselves to appear righteous. Since they use the power of projecting a false light to benefit themselves through obscuring the truth of their abusive nature while feeding off of the worlds apathy to fuel the fire to keep the projection of their false light burning bright. My understanding of this knowledge is due to being a symbolic David. faithfully battling my own goliath; guilty of projecting the false light of insurmountability to my quest of vindicating myself of any kind of murder. Now I am loading this essay into my sling to bring down the enabler of apathy, that helps keep the goliath, I battle standing. As an innocent on Florida's death row, I hsve discovered the evidence that vindicates me, serves to indict a faction within Florida's legal community of racketeering, which in turn taints Florida's use of the death penalty beyond repair. The news of this discovery should excite all human rights, and antideath penalty activist around the world. Since, as Florida's death penalty scheme falls, so does the nations. in October of 1982, I was charged with the murder of my girlfriend's adult son. Above my insistence of being innocent, I was being told the evidence was overwhelming as to guilt. For nearly 30 years the evedence of my innocence has been oppressed, and suppressed throughout the legal process. The hardship I continue to suffer cannot be justified, and as long as I am obscurely hidden in a dungeon cell on florida death row, the odd's are, I will soon be executed. Not due to being guilty of murder, but because the evidence of my innocence indicts a criminal faction operating within Florida's legal community of racketeering: Through obstructing justice. for example: any of the five trial attorney's involved with my case could easily come forward to vindicate me of any kind of murder. They know this, yet have collectively refused to do so. Those attorney's have sworn an oath to protect the integrity of the law. Their complicit failure to come forward to perform their ehtnical duty, now becomes an indicment of racketeering. The cumulative evidence also indicts a host of other members within Florida's legal community of racketeering showing a pattern of their working together to keep the evilness of their false light of righteousness from being extinguished. I pray you will share this essay by posting and emailing it worldwide to all human rights, and death penalty activist. Apathy is the poison that helps kill the innocent - Florida's use of poison is premeditated murder. Both must be stopped! Please help bring me out of obscurity, and an end to the ungodly use of the death penalty. I welcome all inquiries.

Thanks for writing! I finished the transcription for your post.
(scanned reply – view as blog post)
uploaded June 25, 2012.  Original (PDF) 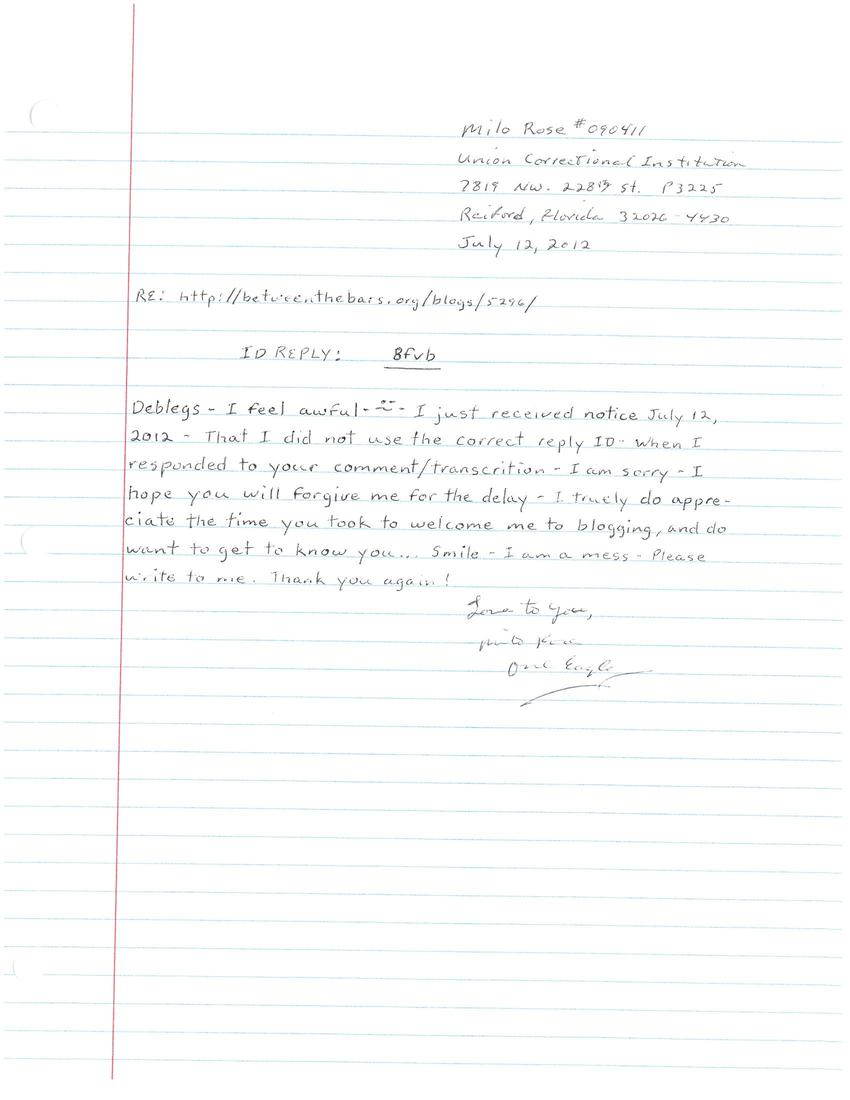