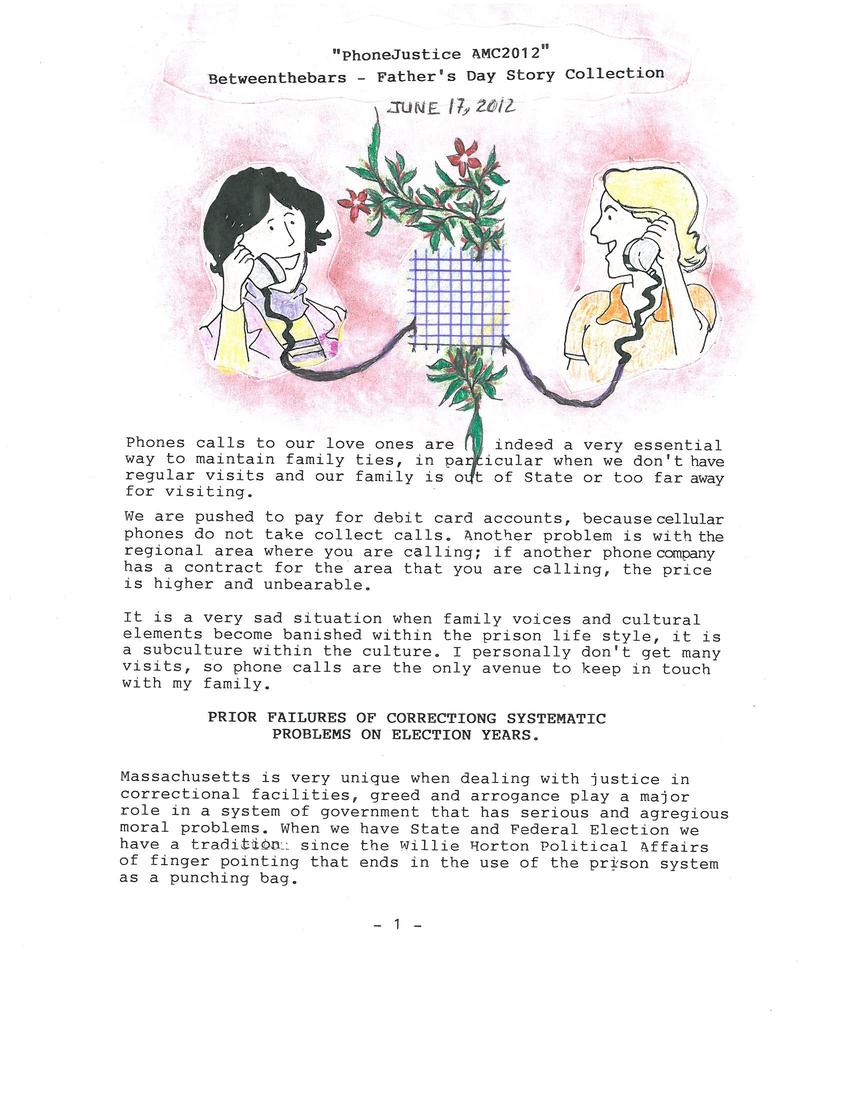 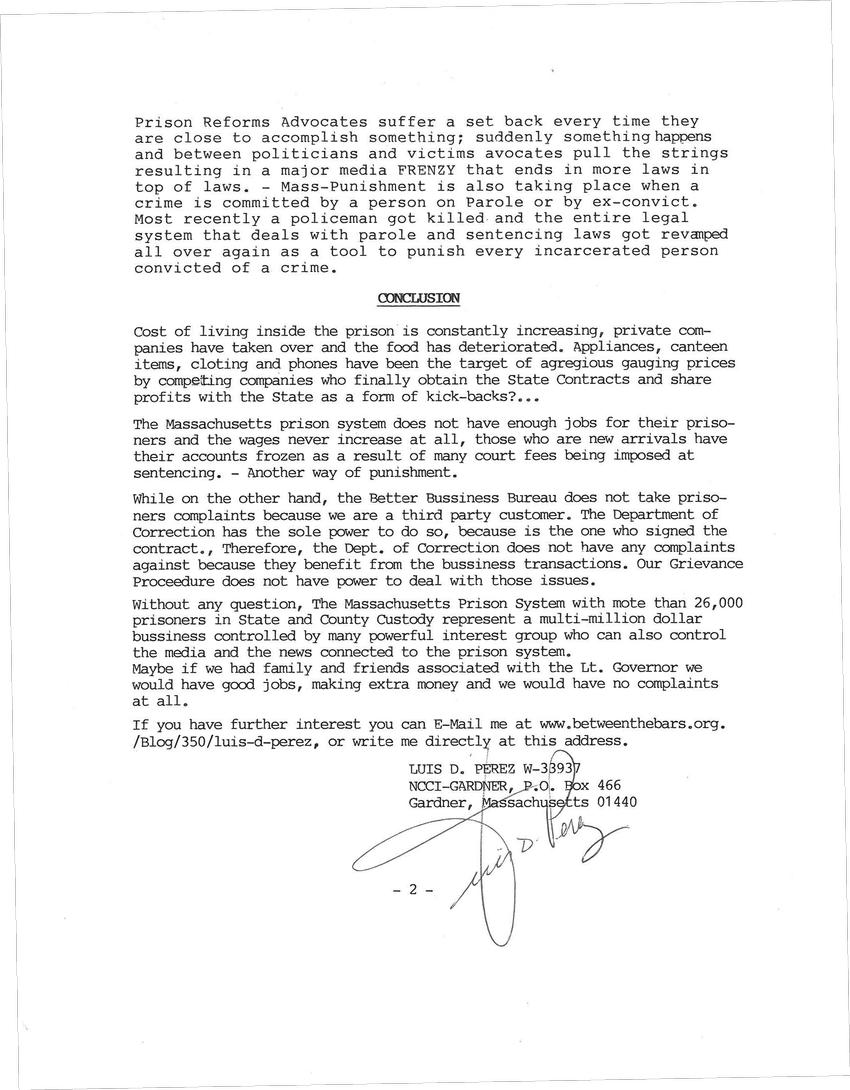 Phone calls to our Love ones are indeed a very essential way to maintain family ties, in particular when we don't have regular visits and our family is our of State or too far away for visiting.

We are pushed to pay for debit card accounts, because cellular phones do not take collect calls. Another problem is with the regional area where you are calling; if another phone company has a contract for the area that you are calling, the price is highter and unbearable.

It is a very sad situation when family voices and cultural elements become banished within the prison life style, it is a subculture within the culture. I personally don't get many visits, so phone calls are the only avenue to keep in touch with my family.

PRIOR FAILURES OF CORRECTION SYSTEMATIC PROBLEMS ON ELECTION YEARS.

Massachusettes is very unique when dealing with justice in correctional facilities, greed and arrogance play a major role in a system of government that has serious and agregious moral problems. When we have State and Federal Election we have a tradition. Since the Willie Horton Political Affairs of finger pointing that ends in the use of the prison system as a punching bag.

Prison Reforms Advocates suffer a set back every time they are close to accomplish something; suddenly somethime happens and between politicians and victimes avocates pull the strings resulting in a major media FRENZY that ends in more laws in top of laws. - Mass-Punishment is also taking place when a crime is committed by a person on Parole or by ex-convict. Most recently a policeman got killed and the entire legal sysstem that deals with parole and sentencing laws got revamped all over again as a tool to punish every incarcerated person convicted of a crime.

Cost of living inside the prison is contantly increasing, private companies have taken over and the food has deteriorated. Appliances, canteen items, clothing and phones have been the targer of agregios gauging prices by competing companies who finally obtain the State Contracts and share profits with the State as form of kick-backs?...

The Massachusetts prison system does not have enough jobs for their prisoners and the wages never increase at all, those who are new arrivals have their accounts frozen as a result of many court fees being imposed at sentencing. - Another way of punishment.

While on the other hand. the Better Bussiness Bureau does not take prisoner complaints because we are a third pary customer. The Department of Correction has the sole power to do so, because it is the one who signed the contract. Therefore, the Dept. of Correction does not have any complaints against because they benefit from the bussiness transactions. Our Grievance Proceedure does not have power to deal with those issues.

Without any quesiton, The Massachusetts Prison System with mote than 26,000 prisoners in State and County Custod represent a multi-million dollar bussiness controlled by many powerful interest group who can also control the media and the news connected to the Prison System. Maybe if we had family and friends associated with the Lt. Governor we would have good jobs, making extra money and we would have no complaints at all.

If you have further interest you can E-Mail me at www.betweenthebars.org/blog/350/luis-d-perez or write me directly at this address.
Luis D. Perez W-33937
NCCI-Gardner, P.O. Box 466
Gardner, Massachusetts 01440

I agree with all that is said here. I have seen it first hand. I see how these men are treated--as if they are less than human beings. Is this right?? No, they too have rights just as we do. It is the system that is letting others run it. Whoever will make the most money gets the contract and they will take away from something else to save a buck--like turning down the heat in the winter. In the eyes of God, we are all equal and for those who have no grasp of that, you really need to remember this when you are looking down upon my husband, like you have never made a mistake. Prisoners are also people and like everyone else, someone loves them. Do we treat them this way because of where they are?? Do we not allow them to have a voice?? God forbid that we do. It is God's intention for ALL of us to help each other. "Let he who is without sin cast the first stone.." Amen!! I am proud of my Husband and I will always stand proudly with him no matter where he is!!!
(scanned reply – view as blog post)
uploaded Nov. 4, 2013.  Original (PDF) 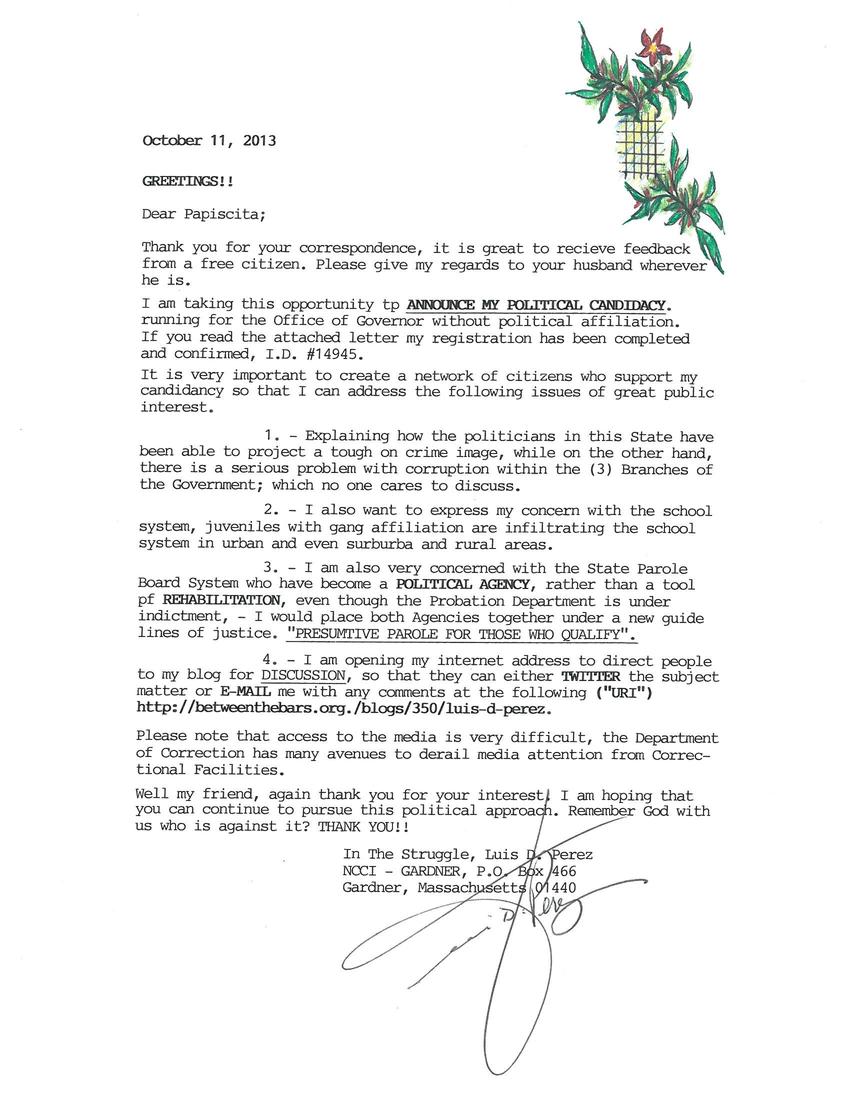 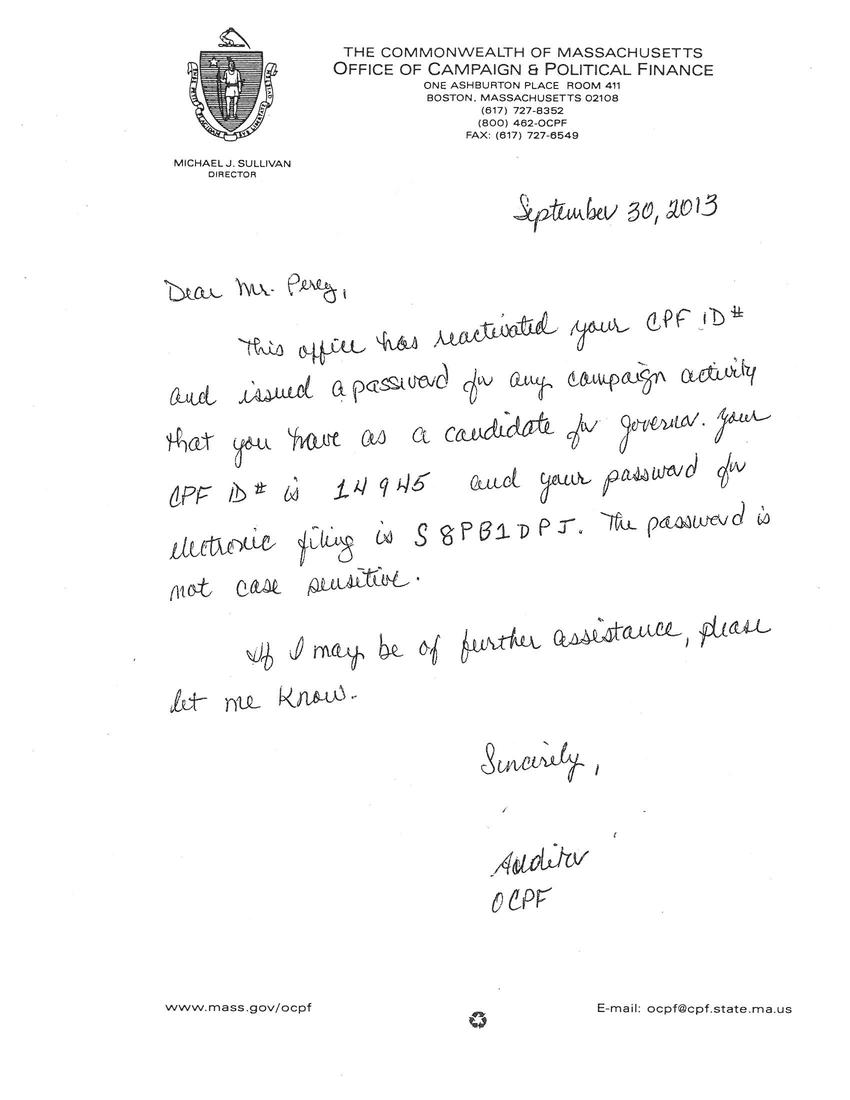 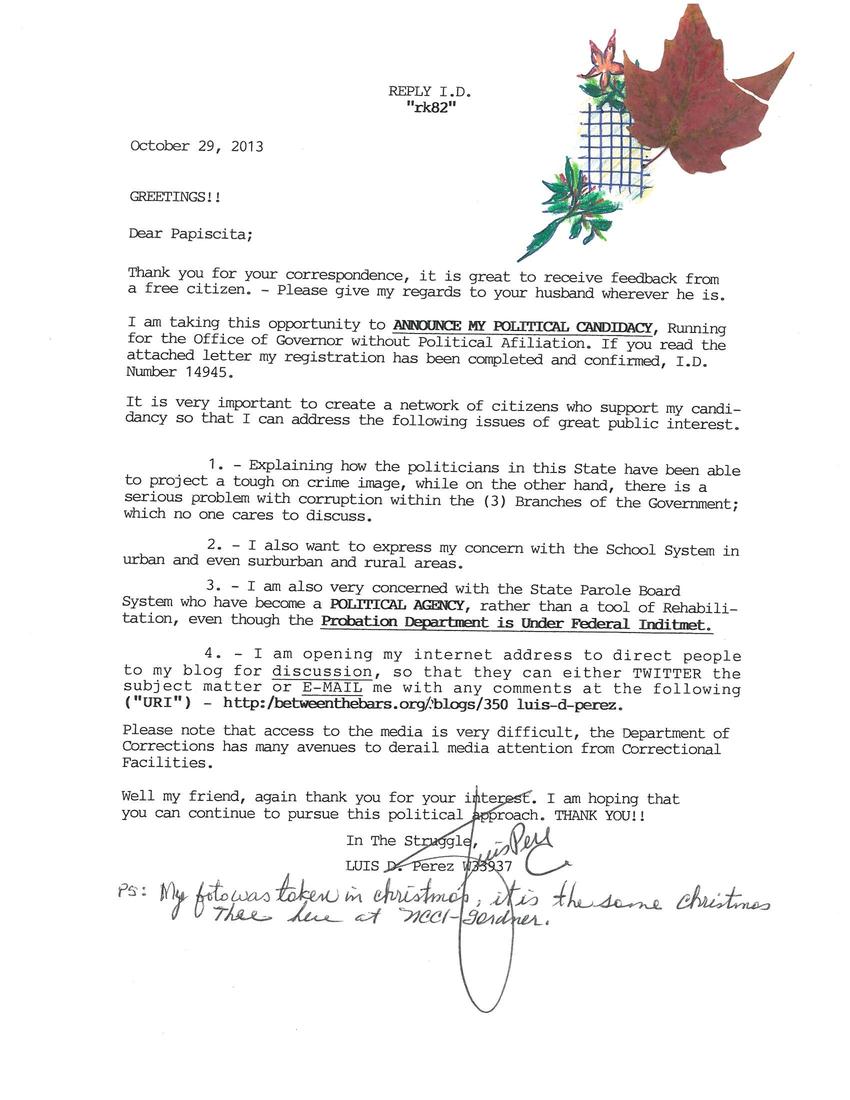