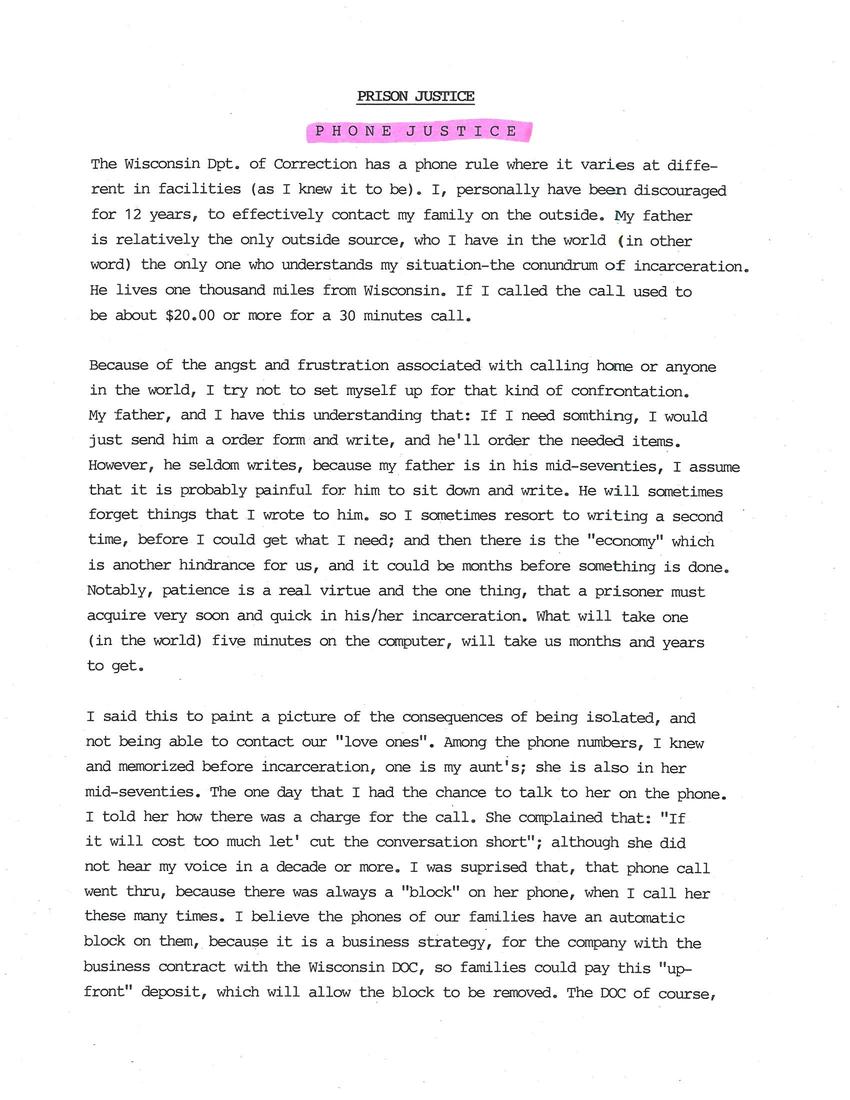 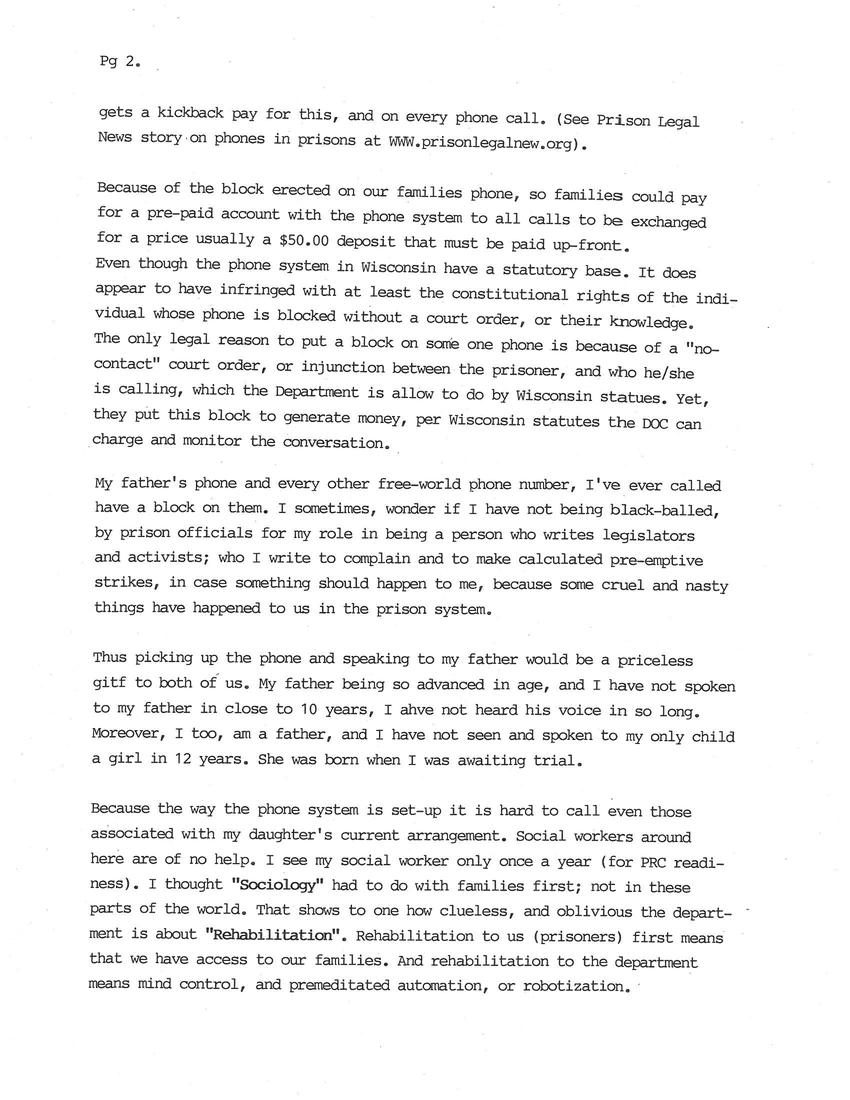 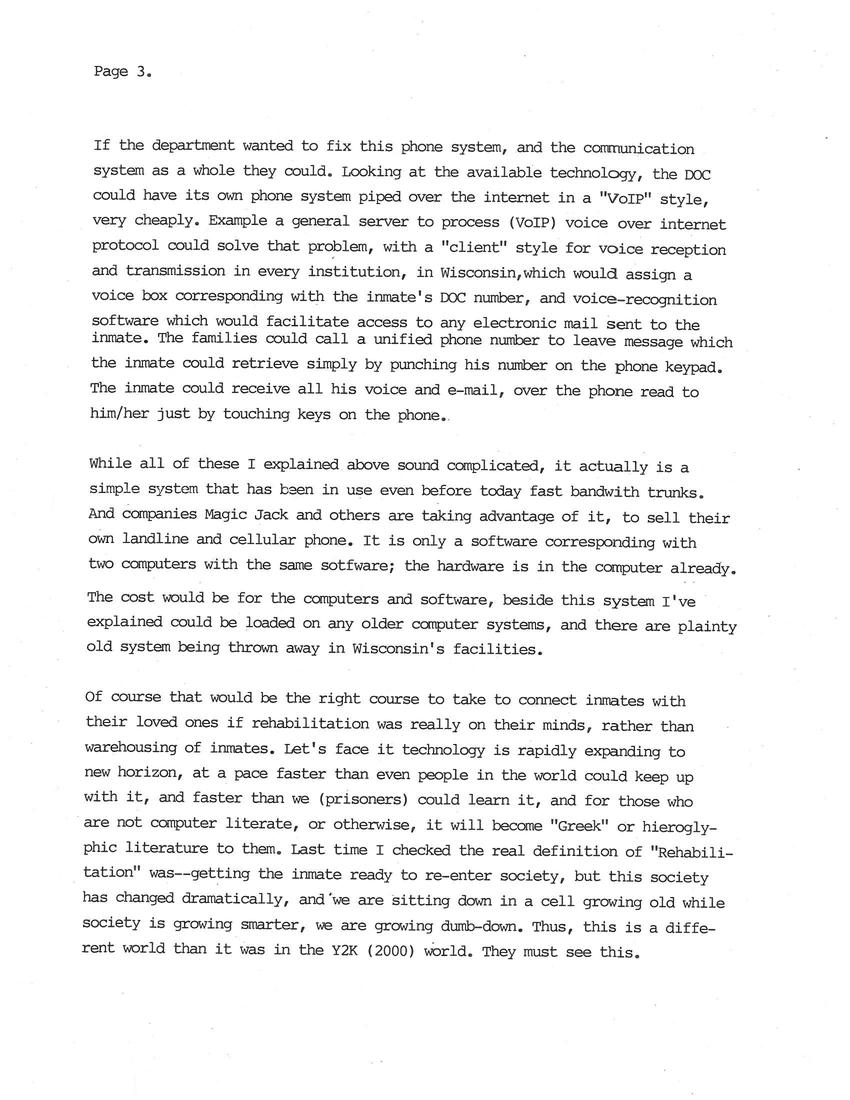 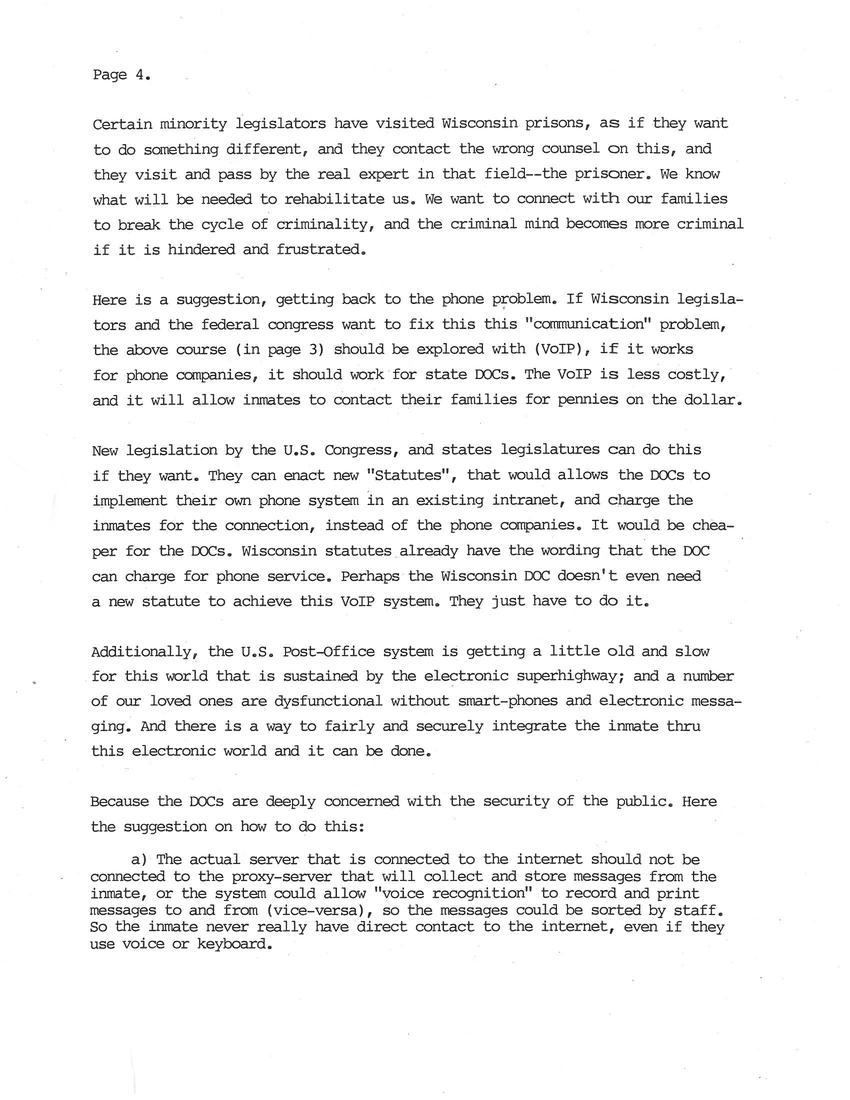 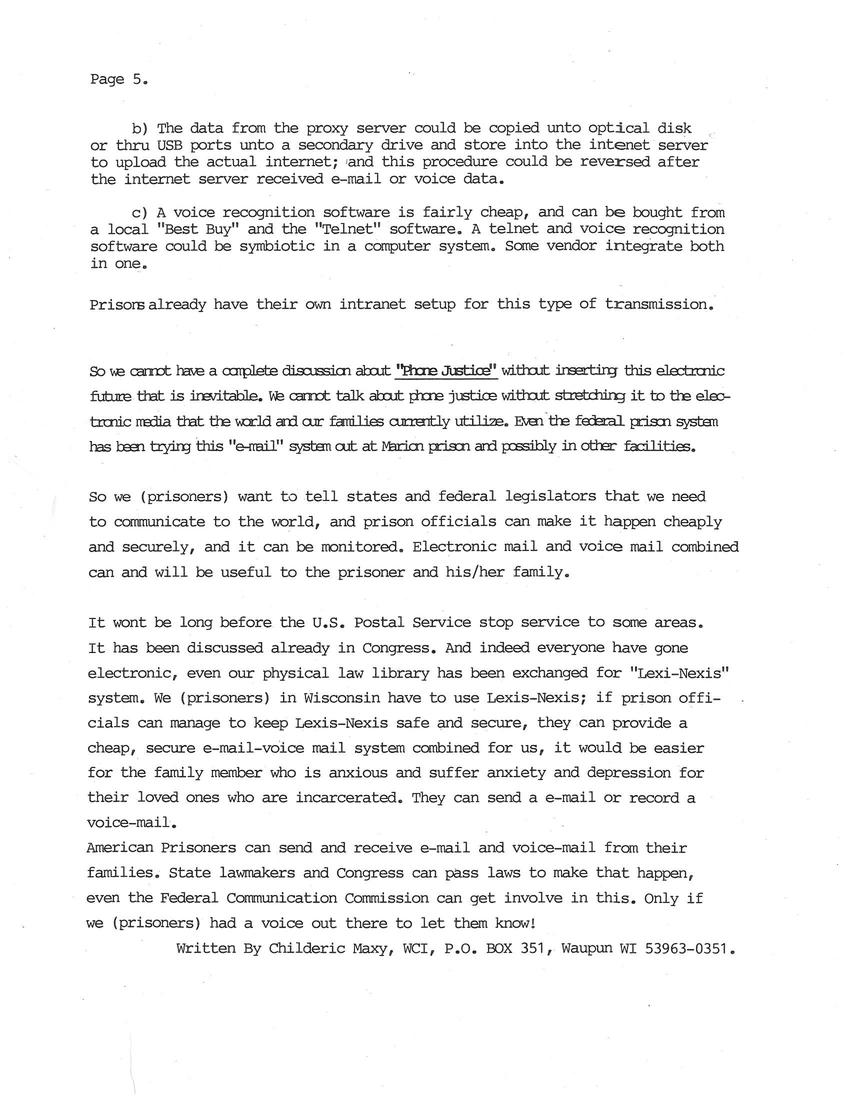 The Wisconsin Dpt. of Correction has a phone rule where it varies at different in facilities (as I knew it to be). I, personally, have been discouraged for 12 years, to effectively contact my family on the outside. My father is relatively the only outside source who I have in the world (in other words), the only one who understands my situation - the conundrum of incarceration. He lives one thousand miles from Wisconsin. If I called the call used to be about $20.00 or more for a 30 minute call.

Because of the angst and frustration associated with calling home or anyone in the world, I try not to set myself up for that kind of confrontation. My father and I have this understanding, that: if I need something, I would just send him an order form and write, and he'll order the needed items. However, he seldom writes, because my father is in his mid-seventies, I assume that it is probably painful for him to sit down and write. He will sometimes forget things that I wrote to him, so I sometimes resort to writing a second time, before I could get what I need; and then there is the "economy" which is another hindrance for us, and it could be months before something is done. Notably, patience is a real virtue and the one thing, that a prisoner must acquire very soon and quick in his/her incarceration. What will take one (in the world) five minutes on the computer, will take us months and years to get.

I said this to paint a picture of the consequences of being isolated, and not being able to contact our "loved ones". Among the phone numbers, I knew and memorized before incarceration, one is my aunt's; she is also in her mid-seventies. The one day that I had the chance to talk to her on the phone. I told her how there was a charge for the call. She complained that: "If it will cost too much let's cut the conversation short"; although she did not hear my voice in a decade or more. I was surprised that that phone call went through, because there was always a "block" on her phone, when I call her these many times. I believe the phones of our families have an automatice block on them, because it is a business strategy, for the company with the business contract with the Wisconsin SOC, so families could pay this "up-front" deposit, which will allow the block to be removed. The DOC, of course, gets a kickback pay for this, and on every phone call. (See Prison Legal News story on phones in prisons at www.prisonlegalnews.org).

Because of the block erected on our families' phones, so families could pay for a pre-paid account with the phone system to all calls to be exchanged for a price, usually a $50.00 deposit that must be paid up-front. Even though the phone system in Wisconsin has a statutory base, it does appear to have infringed with at least the constitutional rights of the individual whose phone is blocked without a court order, or their knowledge. The only legal reason to put a block on someone's phone is because of a "no-contact" court order, on injunction between the prisoner, and who he/she is calling, which the Department is allowed to do by Wisconsin statutes. Yet, they put this block to generate money, per Wisconsin statutes the DOC can charge and monitor the conversation.

My father's phone and every other free-world phone number I've ever called have a block on them. I sometimes wonder if I'm not being black-balled, by prison officials for my role in being a person who writes legislators and activists; who I write to complain and to make calculated pre-emptive strikes, in case something should happen to me, because some cruel and nasty things have happened to us in the prison system.

Because the way the phone system is set-up it is hard to call even those associated with my daughter's current arrangement. Social workers around here are of no help. I see my social worker only once a year (for PRC readiness). I thought "Sociology" has to do with families first; not in these parts of the world. That shows to one how clueless, and oblivious the department is about "Rehabilitation". Rehabilitation to us (prisoners) first means that we have access to our families. And rehabilitation to the department means mind control, and premeditated automation, or robotization.

If the department wanted to fix this phone system, and the communication system as a whole, they could. Looking at the available technology, the SOC could have its own phone system piped over the internet in a "VoIP" style, very cheaply. Example: a general server to process (VoIP) voice over internet protocol could solve that problem, with a "client" style for voice reception and transmission in every institution, in Wisconsin, which would assign a voice box corresponding with the inmate's DOC number, and voice-recognition software which would facilitate access to any electronic mail sent to the inmate. The families could call a unified phone number to leave a message which the inmate could retrieve simply by punching his number on the phone keypad. The inmate could receive all his voicemail and e-mail, over the phone read to him/her, just by touching keys on the phone.

While all of these I explained above sound complicated, it actually is a simple system that has been in use even before today's fast bandwidth trunks. And companies like Magic Jack and others are taking advantage of it, to sell their own landline and cellular phones. It is only software corresponding with two computers with the same software; the hardware is on the computer already.

The cost would be fore the computers and software, besides, this system I've explained could be loaded on any older computer systems, and there are plenty of old systems being thrown away in Wisconsin's facilities.

Of course that would be the right course to take to connect inmates with their loved ones if rehabilitation was really on their minds, rather than warehousing of inmates. Let's face it, technology is rapidly expanding to new horizons, and faster than we (prisoners) could learn it, and for those who are not computer literate, or otherwise, it will become "Greek" or hieroglyphic literature to them. Last time I checked the real definition of "Rehabilitation" was - getting the inmate ready to re-enter society, but this society has changed dramatically, and we are sitting down in a cell growing old while society is growing smarter, we are growing dumbed-down. Thus, this is a different world than it was in the Y2K (2000) world. They must see this.

Certain minority legislators have visited Wisconsin prisons, as if they want to do something different, and they contact the wrong counsel on this, and they visit and pass by the real expert in that field - the prisoner. We know what will be needed to rehabilitate us. We want to connect with out families to break the cycle of criminality, and the criminal mind becomes more criminal if it is hindered and frustrated.

Here is a suggestion, getting back to the phone problem. If Wisconsin legislators and the federal congress want to fix this "communication" problem, the above course should be explored with (VoIP), if it works for phone companies, it should work for state DOCs. The VoIP is less costly, and it will allow inmates to contact their families for pennies on the dollar.

New legislation by the U.S. Congress, and states' legislatures can do this if they want. They can enact new "Statutes", that would allow the DOCs to implement their own phone system in an existing intranet, and charge the inmates for the connection, instead of the phone companies. It would be cheaper for the DOCs. Wisconsin statutes already have the wording that the DOC can charge for phone service. Perhaps the Wisconsin DOC doesn't even need a new statute to achieve this VoIP system. They just have to do it.

Additionally, the U.S. Post Office system is getting a little old and slow for this world that is sustained by the electronic superhighway; and a number of our loved ones are dysfunctional without smart phones and electronic messaging. And there is a way to fairly and securely integrate the inmate through this electronic world and it can be done.

Because the DOCs are deeply concerned with the security of the public, here is a suggestion on how to do this:

b) The data from the proxy server could be copied onto optical disk or through USB ports onto a secondary drive and stored it on the internet server to upload to the actual internet; and this procedure could be reversed after the internet server received e-mail or voice data.

Prisons have their own intranet setup for this type of transmission.

So we cannot have a complete discussion about "Phone Justice" without inserting this electronic future that is inevitable. We cannot talk about phone justice without stretching it to the electronic media that the world and our families currently utilize. Even the federal prison system has been trying this e-mail" system out at Marion prison and possibly in other facilities.

So we (prisoners) want to tell states and federal legislators that we need to communicate to the world, and prison officials can make it happen cheaply and securely, and it can be monitored. Electronic mail and voice mail combined can and will be useful to the prisoner and his/her family.

It won't be long before the U.S. Postal Service stops service to some areas. It has been discussed already in Congress. And indeed everyone has gone electronic, even our physical law library has been exchanged for the "Lexis-Nexis" system. We (prisoners) in Wisconsin have to use Lexis-Nexis; is prison officials can manage to keep Lexis-Nexis safe and secure, they can provide a cheap, secure e-mail-voice mail system combined for us, it would be easier for the family members who are anxious and suffer anxiety and depression for their loved ones who are incarcerated. They can send an e-mail or record a voice mail.

American Prisoners can send and receive e-mail and voice mail from their families. State lawmakers and Congress can pass laws to make that happen, even the Federal Communication Commission can get involved in this. Only if we (prisoners) had a voice out there to let them know!