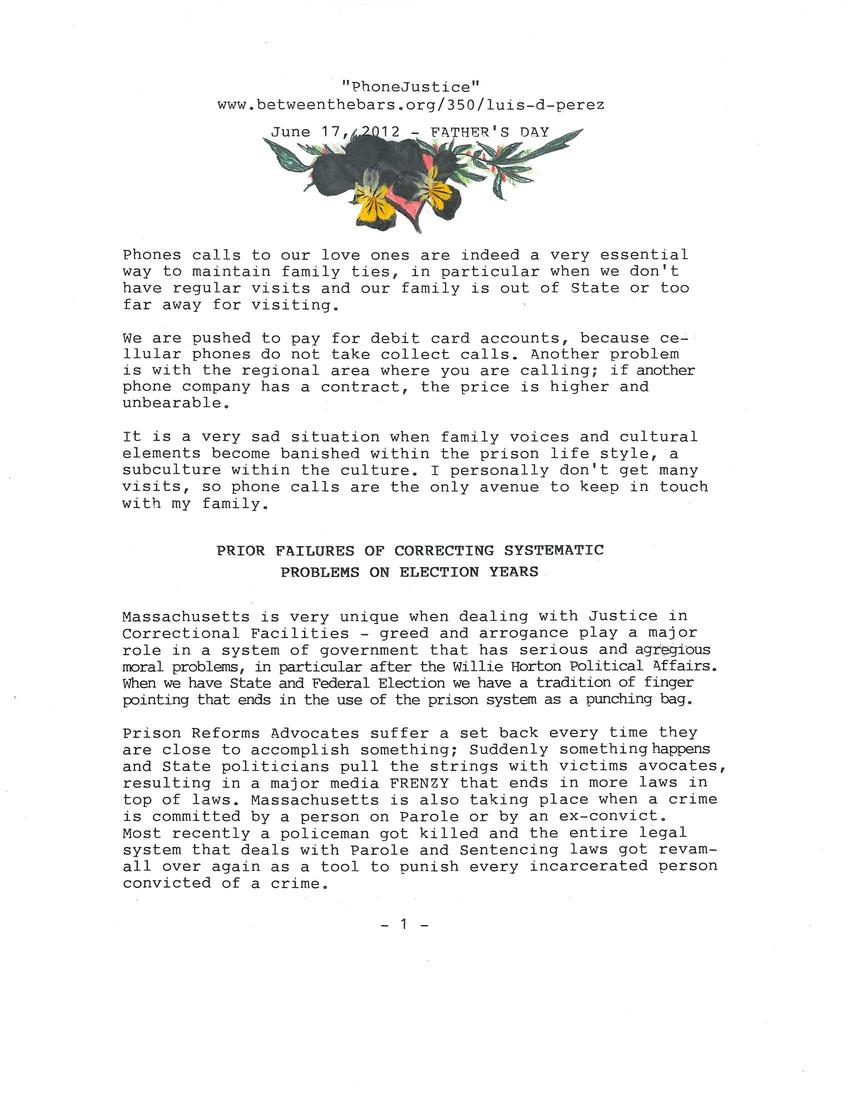 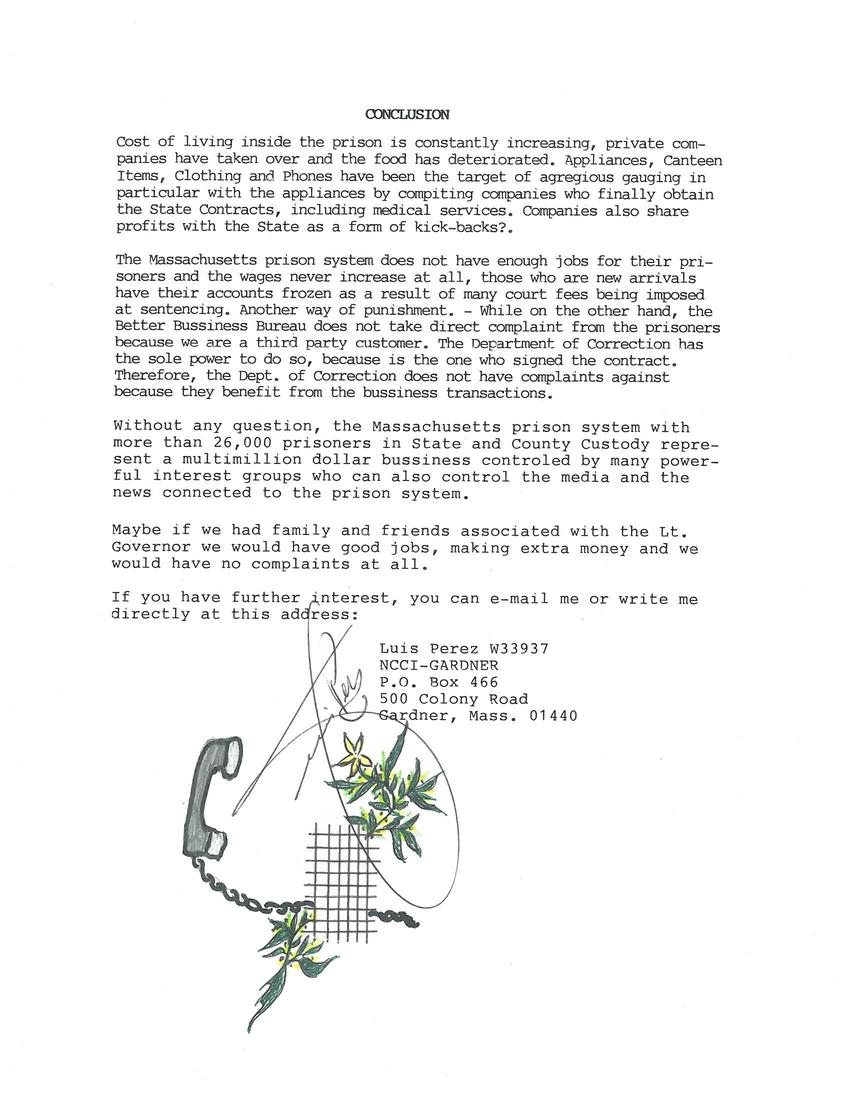 Phone calls to our loved ones are indeed a very essential way to maintain family ties, in particular when we don't have regular visits and our family is out of State or too far away for visiting.

We are pushed to pay for debit card accounts, because cellular phones do not take collect calls. Another problem is with the regional area where you are calling; if another phone company has a contract, the price is higher and unbearable.

It is a very sad situation when family voices and cultural elements become banished within the prison life style, a subculture within the culture. I personally don't get many visits, so phone calls are the only avenue to keep in touch with my family.

PRIOR FAILURES OF CORRECTING SYSTEMATIC PROBLEMS ON ELECTION YEARS

Massachusetts is very unique when dealing with Justice in Correctional Facilities - greed and arrogance play a major role in a system of government that serious and egregious moral problems, in particular after the Willie Horton Political Affairs. When we have State and Federal Election we have a tradition of finger pointing that ends in the use of the prison system as a punching bag.

Prison Reforms Advocates suffer a set back every time they are close to accomplish something; suddenly something happens and State politicians pull the strings with victims' advocates, resulting in a major media FRENZY that ends in more laws on top of laws. Massachusetts is also taking place when a crime is committed by a person on Parole or by an ex-convict. Most recently a policeman got killed and the entire legal system that deals with Parole and Sentencing laws got revamped all over again as a tool to punish every incarcerated person convicted of a crime.

Cost of living inside the prison is constantly increasing, private companies have taken over and the food has deteriorated. Appliances, Canteen Items, Clothing and Phones have been the target of egregious gauging in particular with the appliances by competing companies who finally obtain the State Contracts, including medical services. Companies also share profits with the State as a form of kick-backs.

The Massachusetts prison system does not have enough jobs for their prisoners and the wages never increase at all, those who are new arrivals have their accounts frozen as a result of many court fees being imposed at sentencing. Another way of punishment. While on the other hand, the Better Business Bureau does not take direct complaint from the prisoners because we are a third party customer. The Department of Correction has the sole power to do so, because it is the one who signed the contract. Therefore, the Dept. of Correction does not have complaints against because they benefit from the business transactions.

Without any question, the Massachusetts prison system with more than 26,000 prisoners in State and County Custody represent a multimillion dollar business controlled by many powerful interest groups who can also control the media and the news connected to the prison system.

Maybe if we had family and friends associated with the Lt. Governor we would have good jobs, making extra money and we would have no complaints at all.

If you have further interest, you can e-mail me or write me directly at this address:

[Drawing of phone cord and flowers going through bars]

Hey Luis,
This is Rev. Jason Lydon, formerly from the Community Church of Boston. I have gotten to read so much of your writing and really appreciate the poetry and art you send out from the inside. I would love to talk with you about the phone justice campaign. I am currently at the Allied Media Conference in Detroit and have stumbled upon your blog post. I am sure you know, but there is a hearing coming up on July 19th in Massachusetts about phones and prisons. Are you working with folks at PLS or Through Barbed Wire, or anywhere else, to get your info out? One of the things I'd love to do is share this piece that you have shared online. Again, thank you for all of the work that you do. I look forward to talking with you more. If you'd like to write to me directly, I'd more than welcome that. I can be reached at my home address -
Jason Lydon
49 Wellesley Park
Dorchester, MA 02124

Blessings!
Hi Luis!
I am at the Allied Media Conference in a workshop by Blogging between Bars. I just read your letter about the cost of phone calls in MA prisons. I live in Boston and work on prison justice issues. On July 19th there will be a public people's hearing on the high cost of phone calls in and out of MA prisons, which I'm excited to attend. Its been wonderful to be here in Detroit at the AMC to learn from others about this nationwide effort. Stories like yours are invaluable to the process of telling the truth to people on the outside who just don't understand (or take the time to care) about the struggles of people behind bars to connect to family, friends and resources. I'll keep you posted on the what happens at the hearing on July 19th. Hopefully your words will be able to be shared on the 19th too.

Best,
Morrigan Phillips
I really appreciate you sharing you writing and art here. A lot of what you said really resonated with me and my experience. Thanks for sharing your wisdom. -J
Hi, Luis