Reply ✍ Transcribed
From Everything you wanted to know about prison, but were afraid to ask" by Daniel Masterson (author's profile)
Share this:
uploaded July 5, 2012.  Original (PDF) 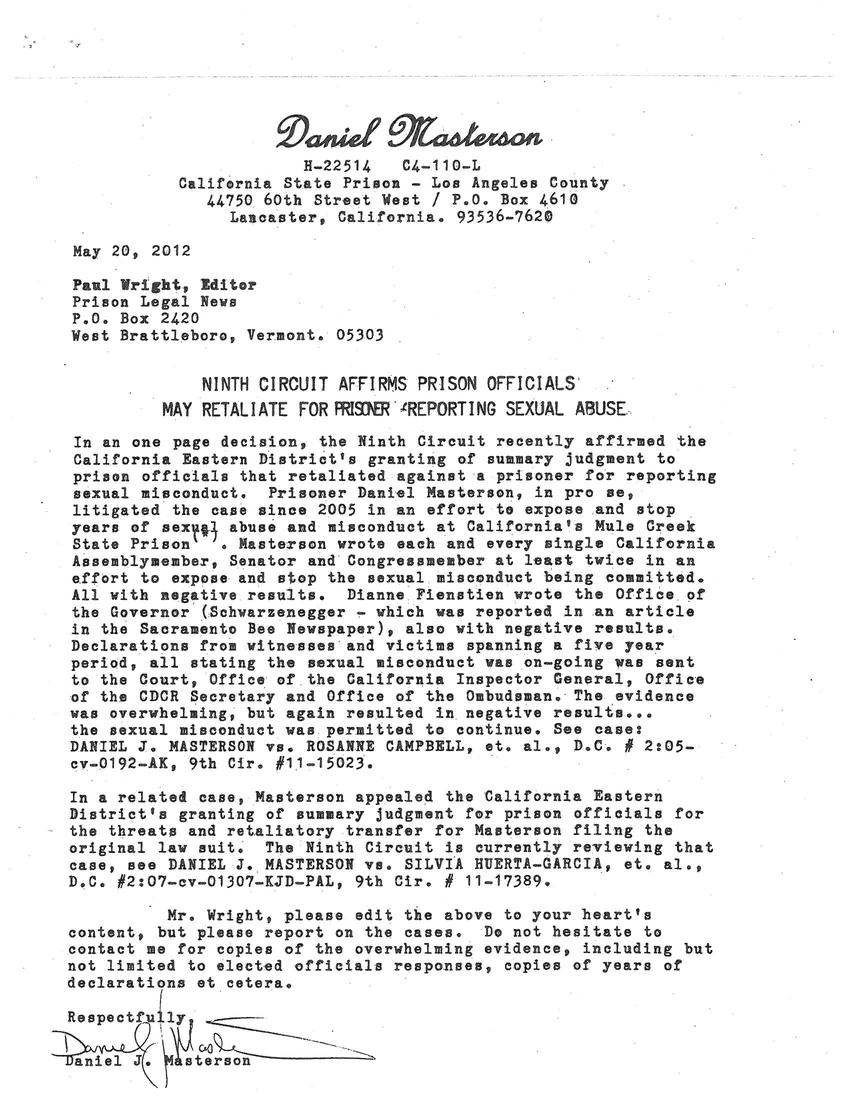 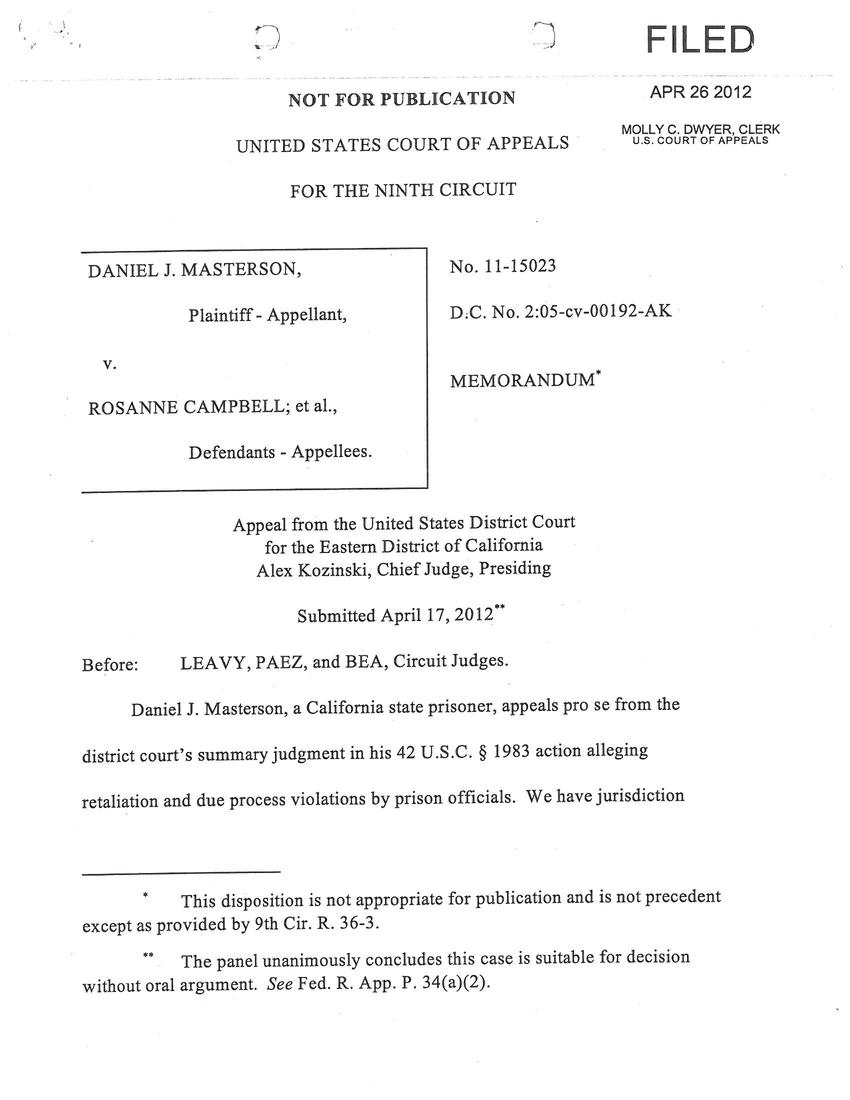 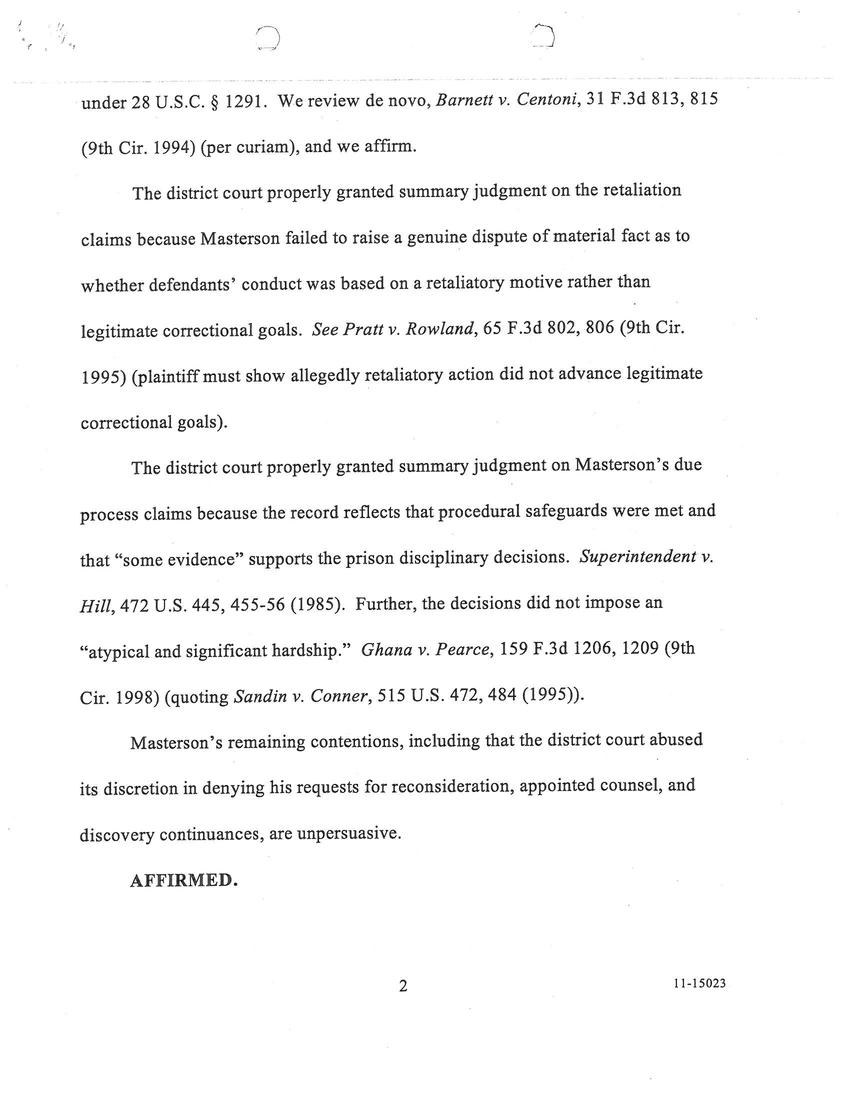 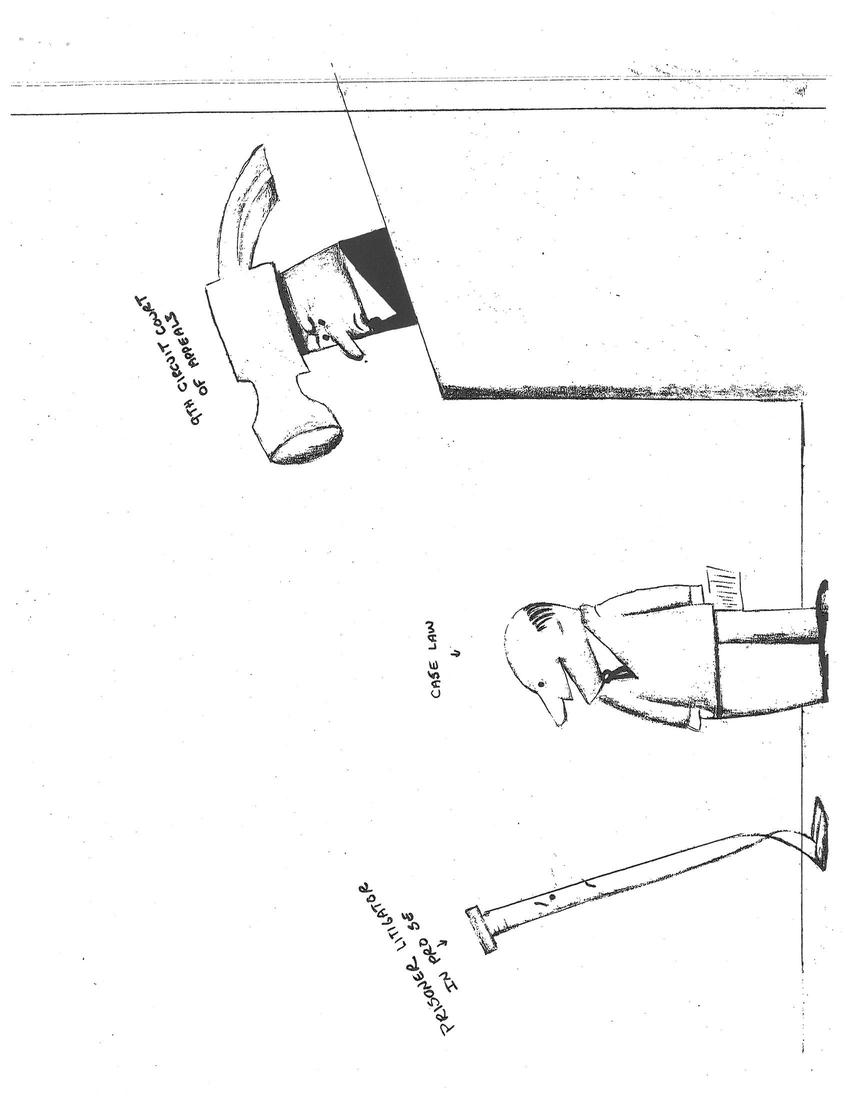 In a one page decision, the Ninth Circuit recently affirmed the California Eastern District's granting of summary judgment to prison officials that retaliated against a prisoner for reporting sexual misconduct. Prisoner Daniel Masterson, in pro se, litigated the case since 2005 in an effort to expose and stop years of sexual abuse and misconduct at California's Mule Creek State Prison(*). Masterson wrote each and every single California Assemblymember, Senator and Congressmember at least twice in an effort to expose and stop the sexual misconduct being committed. All with negative results. Dianne Fienstien wrote the Office of the Governor (Schwarzenegger - which was reported in an article in the Sacramento Bee Newspaper), also with negative results. Declarations from witnesses and victims spanning a five year period, all stating the sexual misconduct was on-going was sent to the Court, Office of the California Inspector General, Office of the CDCR Secretary and Office of the Ombudsman. The evidence was overwhelming, but again resulted in negative results...the sexual misconduct was permitted to continue. See case: DANIEL J. MASTERSON vs. ROSANNE CAMPBELL, et. al., D.C. #2:05-cv-0192-AK, 9th Cir. #11-15023.

Mr. Wright, please edit the above to your heart's content, but please report on the cases. Do not hesitate to contact me for copies of the overwhelming evidence, including but not limited to elected officials' responses, copies of years of declarations, et cetera.

UNITED STATES COURT OF APPEALS FOR THE NINTH CIRCUIT

The district court properly granted summary judgment on the retaliation claims because Masterson failed to raise a genuine dispute of material fact as to whether defendants' conduct was based on a retaliatory motive rather than legitimate correctional goals. See Pratt v. Rowland, 65 F.3d 802, 806 (9th Cir. 1995) (plaintiff must show allegedly retaliatory action did not advance legitimate correctional goals).

Masterson's remaining contentions, including that the district court abused its discretion in denying his requests for reconsideration, appointed counsel, and discovery continuances, are unpersuasive.

* This disposition is not appropriate for publication and is not precedent except as provided by 9th Cir. R. 36-3.

** The panel unanimously concludes this case is suitable for decision without oral argument. See Fed. R. App. P. 34(a)(2).

Hello Daniel. I read your blog posts and have really liked them. My name is Alyssa and I am asking a few people on the betweenthebars.org blogs some questions for my own research and was wondering if you would answer them if you felt like it. What are ways that some men deal with missing women in prison? Do you think men change not being around women? If so in what ways? How do you think this affects them when they are released? How do men deal with their "needs"? Do you think men become more reserved or dont know how to deal with a womens "touch" when released? ;) I just want to hear your input on this out of curiosity. Speak your mind. You don’t have to hold back. Nothing will offend me. Haha. I would love to maybe see a blog post about this too. Thank you. Hope to hear back soon:)

I would love to see you post more blogs often as well!