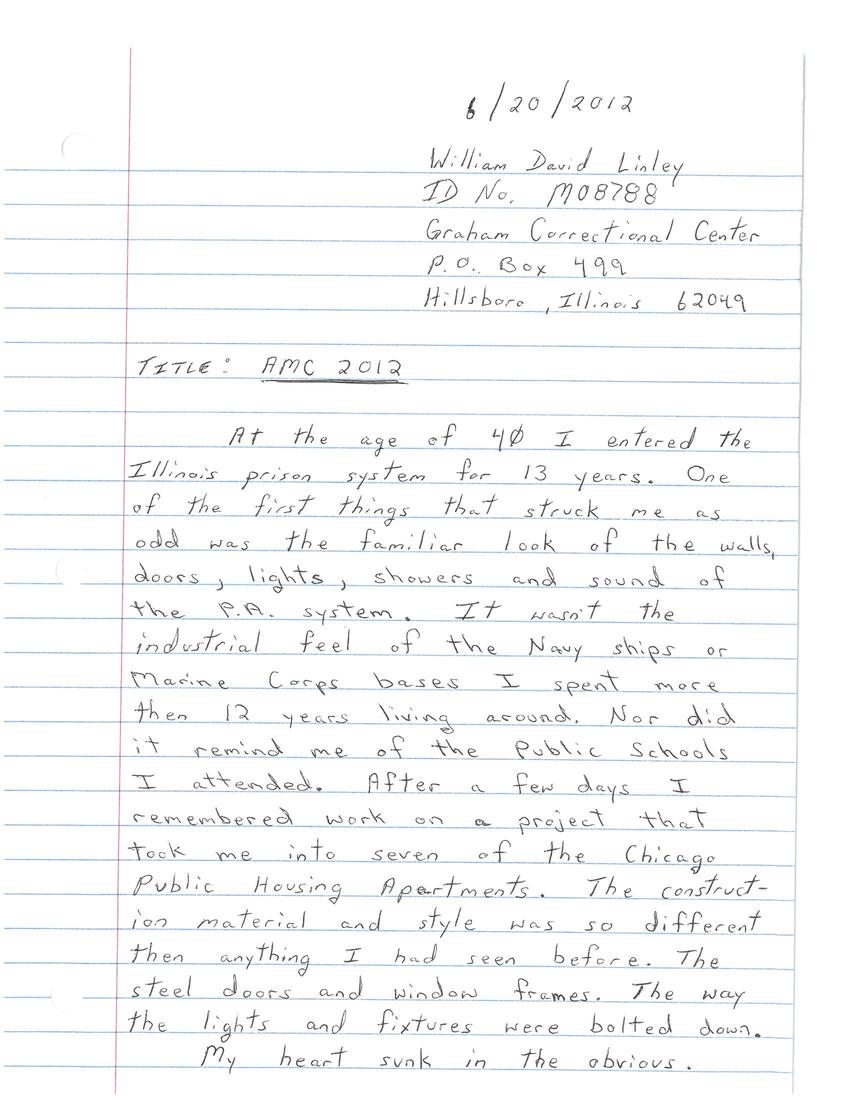 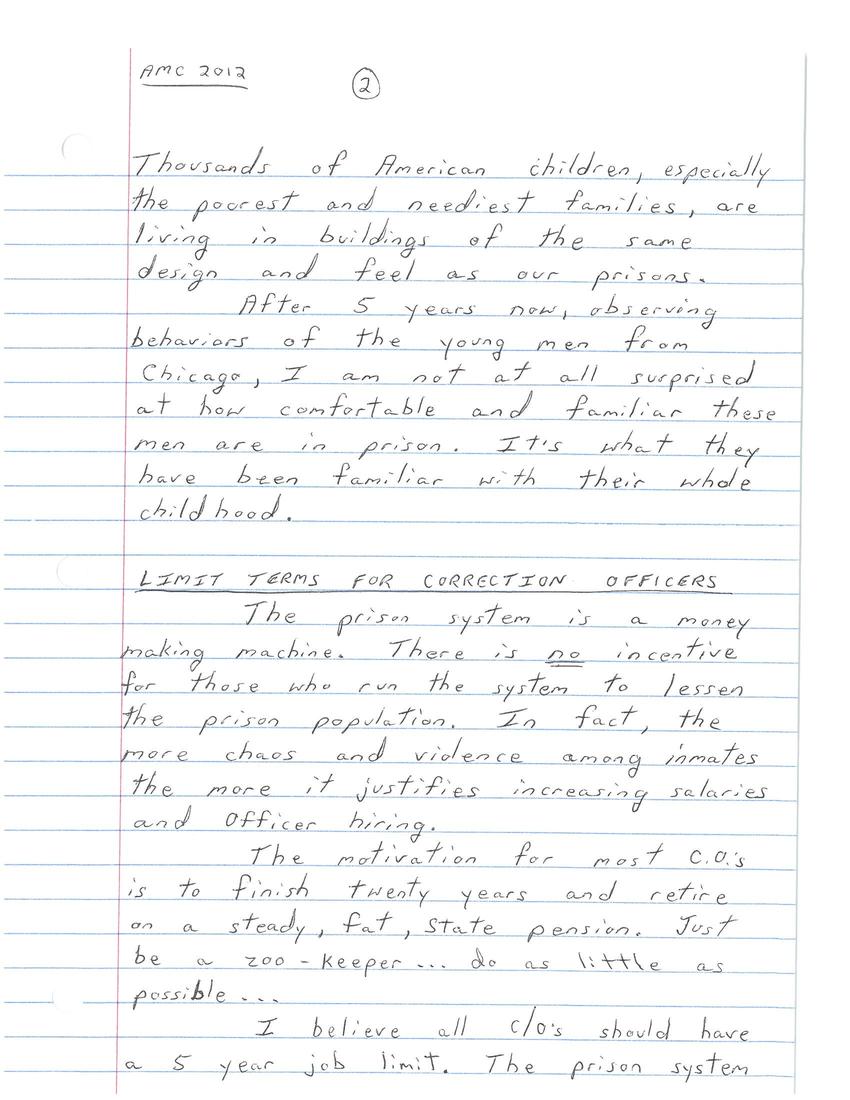 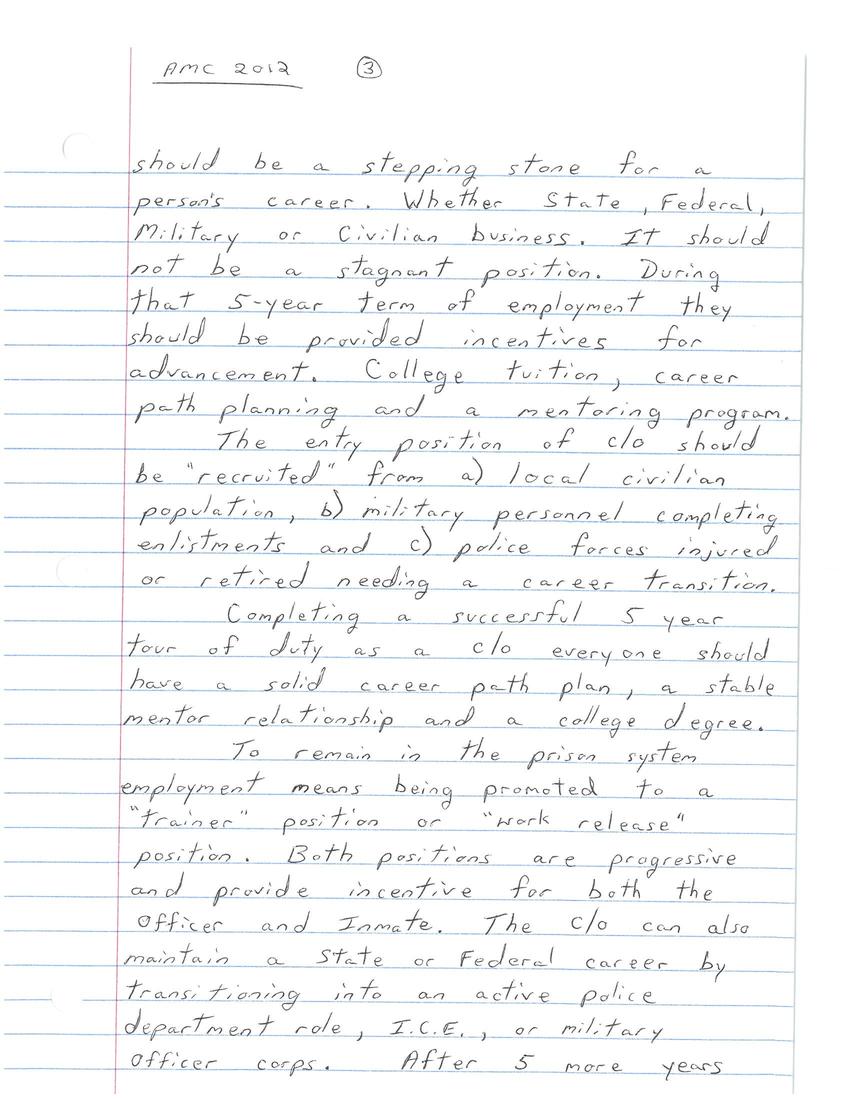 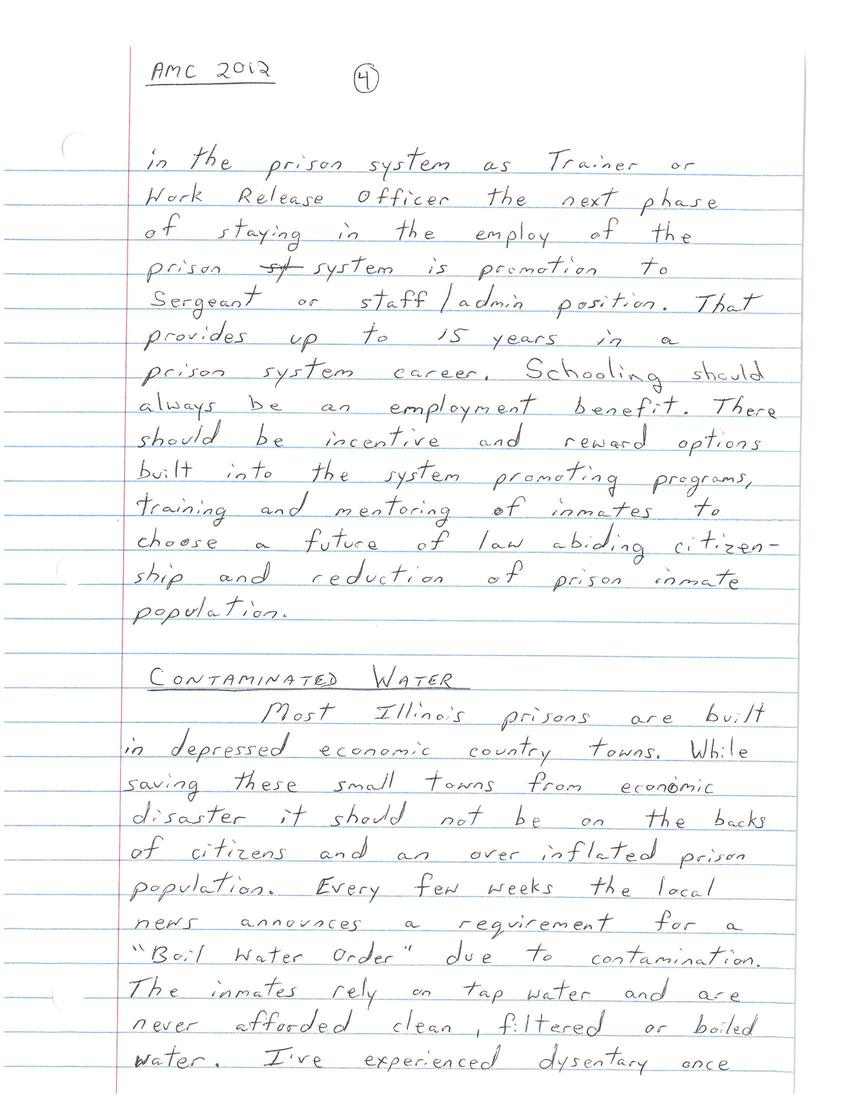 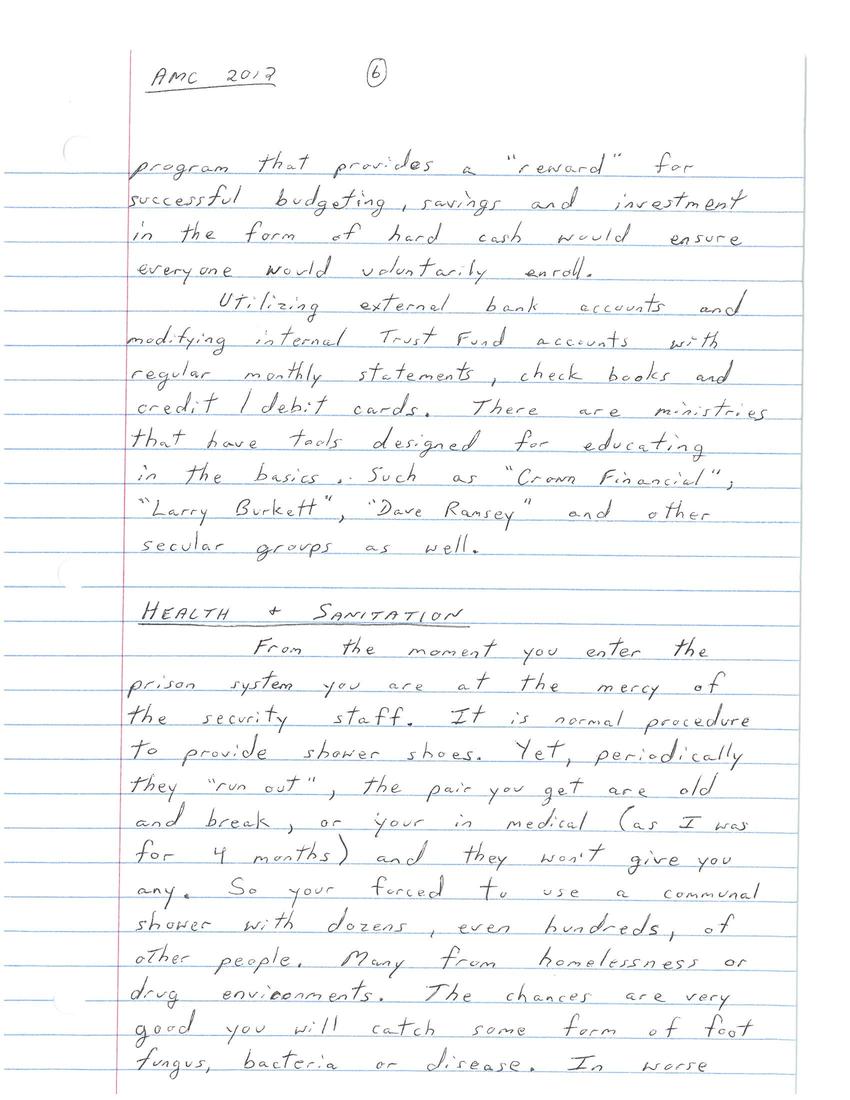 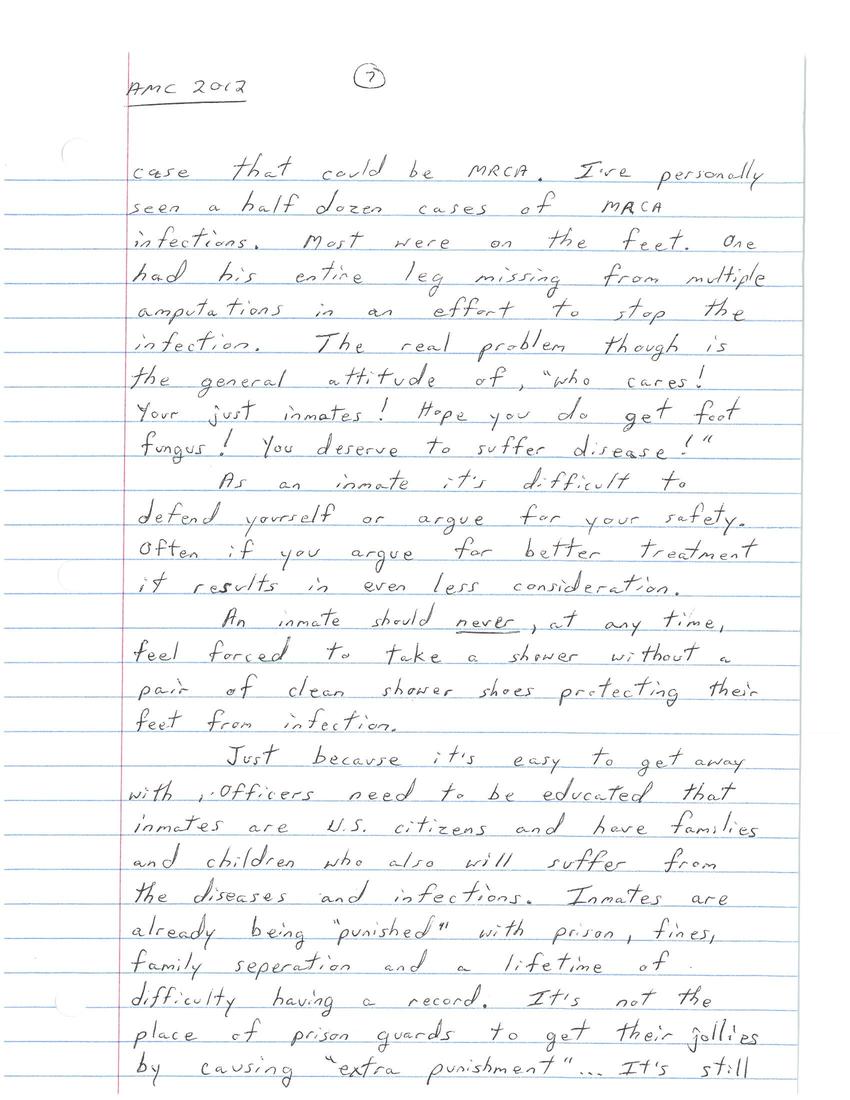 At the age of 40 I entered the Illinois prison system for 13 years. One of the first things that struck me as odd was the familiar look of the walls, doors, lights, showers and sound of the P A system. It wasn't the industrial feel of the Navy ships or Marine Corps bases I spent more than 12 years living around. Nor did it remind me of the Public Schools I attended. After a few days I remembered work on a project that took me into seven of the Chicago Public Housing Apartments. The construction material and style was so different than anything I had seen before. The steel doors and window frames. The way the lights and fixtures were bolted down.

My heart sunk in the obvious.

Thousands of American children, especially the poorest and neediest families, are living in buildings of the same design and feel as our prisons.

After 5 years now, observing behaviors of the young men from Chicago, I am not at all surprised at how comfortable and familiar these men are in prison. It's what they have been familiar with their whole childhood.

The prison system is a money making machine. There is no incentive for those who run the system to lessen the prison population. In fact, the more chaos and violence among inmates the more it justifies increasing salaries and officer hiring.

The motivation for most C. O. s is to finish twenty years and retire on a steady, fat state pension. Just be a zoo-keeper... do as little as possible...

I believe all c/o's should have a 5 year job limit. The prison system should be a stepping stone for a person's career. Whether State, Federal, Military or Civilian business. It should not be a stagnant position. During that 5-year term of employment they should be provided incentives for advancement. college tuition, career path planning and a mentoring program.

The entry position of c/o should be "recruited" from a) local civilian population, b) military personnel completing enlistments and c) police forces injured or retired needing a career transition.

Completing a successful 5 year tour of duty as a c/o everyone should have a solid career path plan, a stable mentor relationship and a college degree.

To remain in the prison system employment means being promoted to a "trainer" position or "work release" position. Both positions are progressive and provide incentive for both the officer and inmate. The c/o can also maintain a State or Federal career by transitioning into an active police department role, I.C.E, or military officer corps. After 5 more years in the prison system as trainer or work release officer the next phase of staying in the employ of the prison system is promotion to sergeant or staff/admin position. That provides up to 15 years in a prison system career. Schooling should always be an employment benefit. There should be incentive and reward options built into the system promoting programs, training and mentoring of inmates to choose a future of law abiding citizen-ship and reduction of prison inmate population.

Most Illinois prisons are build in depressed economic country towns. While saving these small towns from economic disaster it should not be on the backs of citizens and an ever inflated prison population. Every few weeks the local news announces a requirement for a "Boil Water Order" due to contamination. The inmates rely on tap water and are never afforded clean, filtered or boiled water. I've experienced dysentery once a month whereas in more than 12 years of military overseas experience I may have experienced contaminated water 10 times. Twice severely because I was in Pakistan and Iraq and there was accidental contamination. Although [to?] American citizens the general treatment reflects that inmates deserve misery and punishment. So it's easy to ignore things like contaminated water, spoiled food, moldy vents, inmate violence on other inmates and recurring illnesses.

Everyone agrees that recidivism is one of the main problems in our communities. Treatment and programs which focus on "addictions" are very helpful in that they reveal many underlying causes of addictions.

There is absolutely NO training in financial responsibility and budgeting skills. Most everyone in prison desires money on their account to make purchases from the Commissary / Store. What public schools teach budgeting, investing and credit card use?

A program designed to teach and create accountability for finances. A program that provides a "reward" for successful budgeting, daving and investment in the form of hard cash would ensure everyone would voluntarily enroll.

Utilizing external bank accounts and modifying internal Trust Fund accounts with regular monthly statements, check books and credit/debit cards. There are ministries that have tools designed for educating in the basics, such as "Crown Financial", "Larry Burkett", "Dave Ramsey" and other secular groups as well.

From the moment you enter the prison system you are at the mercy of the security staff. It is normal procedure to provide shower shoes. Yet, periodically they "run out", the pair you get are old and break, or you're in medical (as I was for 4 months) and htey won't give you any. So you're forced to use a communal with dozens, even hundreds, of other people. Many from homelessness or drug environments. The chances are very good you will catch some form of foot fungus, bacteria or disease. In worse case that could be MRCA. I've personally seen a half dozen cases of NRCA infections. Most were on the feet. One had his entire leg missing from multiple amputations in an effort to stop the infection. The real problem though is the general attitude of "who cares! You're just inmates! Hope you do get foot fungus! You deserve to suffer disease!"

As an inmate it's difficult to defend yourself or argue for your safety. Often if you argue for better treatment it results in even less consideration.

An inmate should never, at any time, feel forced to take a shower without a pair of clean shower shoes protecting their feet from infection.

Just because it's easy to get away with, officers need to be educated that inmates are U.S. citizens and have families and children who also will suffer from the diseases and infections. Inmates are already being "punished" with prison, fines, family separation and a lifetime of difficulty having a record. It's not the place of prison guards to get their jollies by causing "extra punishment"...It's still evil.

Along with this is the fact that Hepatitis-C is an incurable liver destroying disease which is the most common infection in prisons. While much of this is from tattoo needles or other means of blood contact, like fighting; While in County jail for 3 years we were forced to share one set of nail clippers among over 100 men. Hair trimmers, which often cut the skin and scalp, were rarely cleaned. Finally the razors were locked in a common box and we used our razor twice a week. Once a week the razors were replaced. Dozens of times it was obvious my assigned razor was used. Many times a guy wanted a fresh razor so grab someone elses. Or the replacement gets mixed up with an old used one.

The final insult to this is HEP-C takes many years before symptoms appear. By then the damage to the liver is irreversible. The prison medical staff refuses to conduct blood tests for HEP-C. Of course not, since treatment costs 1,500 to 1,900 dollars a month.

The final issue of prison needs, also can help our communities and promote good deeds.

In this prison along, half the men (1,000) are healthy enough to work. At least 250 to 500 men would be willing to do volunteer work to help our communities. For instance, our country is suffering from Tornado, flood and fire disasters. The inmate population is a wasted resource for good.

-Build house frames for Habitat for Humanity. Or house kits to package and ship to disaster areas.

-Build tents and survival kits for shipping to disaster areas.

It would take 10 more pages to describe in detail how ridiculous these supposed "help" systems are.

If you're assaulted or mistreated by a staff member or officer you're supposed to file a "grievance". This goes to a person who is on staff at the prison. A person who is already calloused toward inmates, immediately assuming an inmate is a liar or up to no good. They also have a personal interest in protecting their fellow state employee. They could be the next complaint. Once the grievance is filed against a state employee, they always find out. Now you are open target for revenge attacks.

The P.D's work for the State, their future rests in the system and the Judge is their boss. How does this person give fair representation?

The P.C.P. simply loops back to the same Court that sentenced you. They're really going to admit a mistake? It's no wonder the P.C.P. sits in limbo for 2 or 3 years.

Thanks for writing! I finished the transcription for your post. The section on MRCA was terrifying.