The Purpose of a Woman 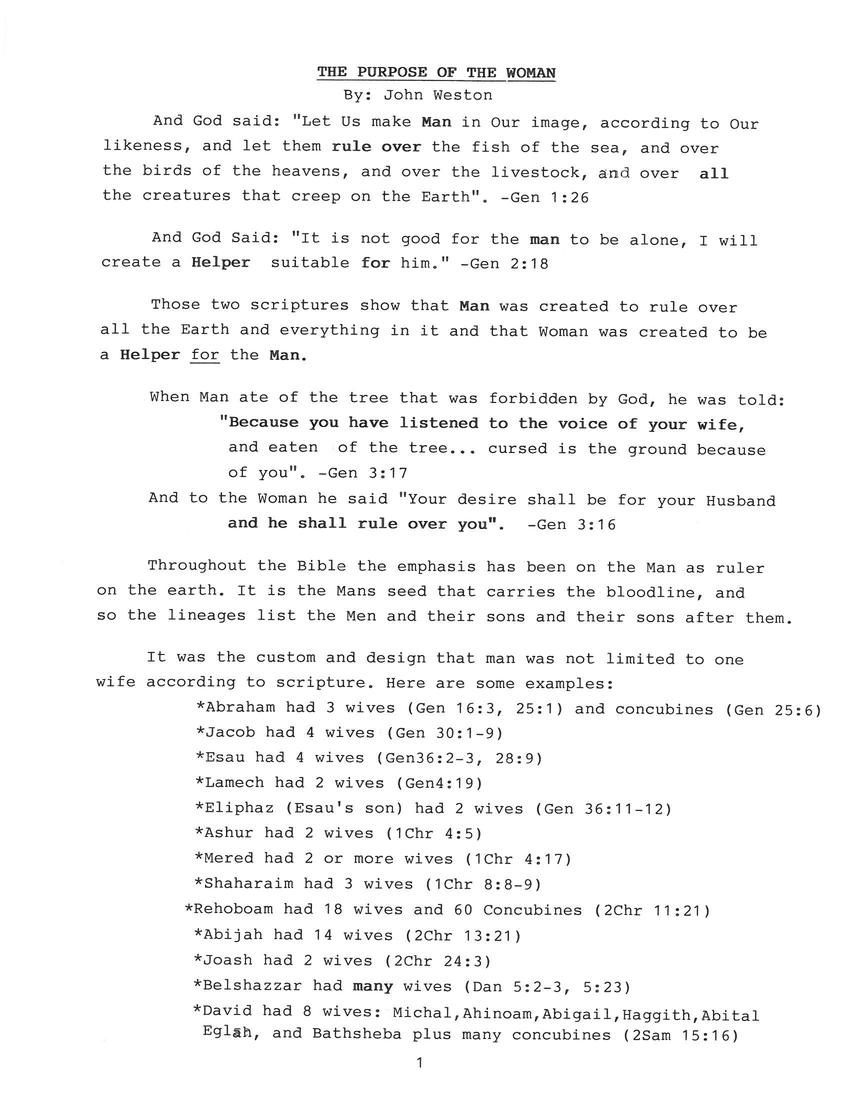 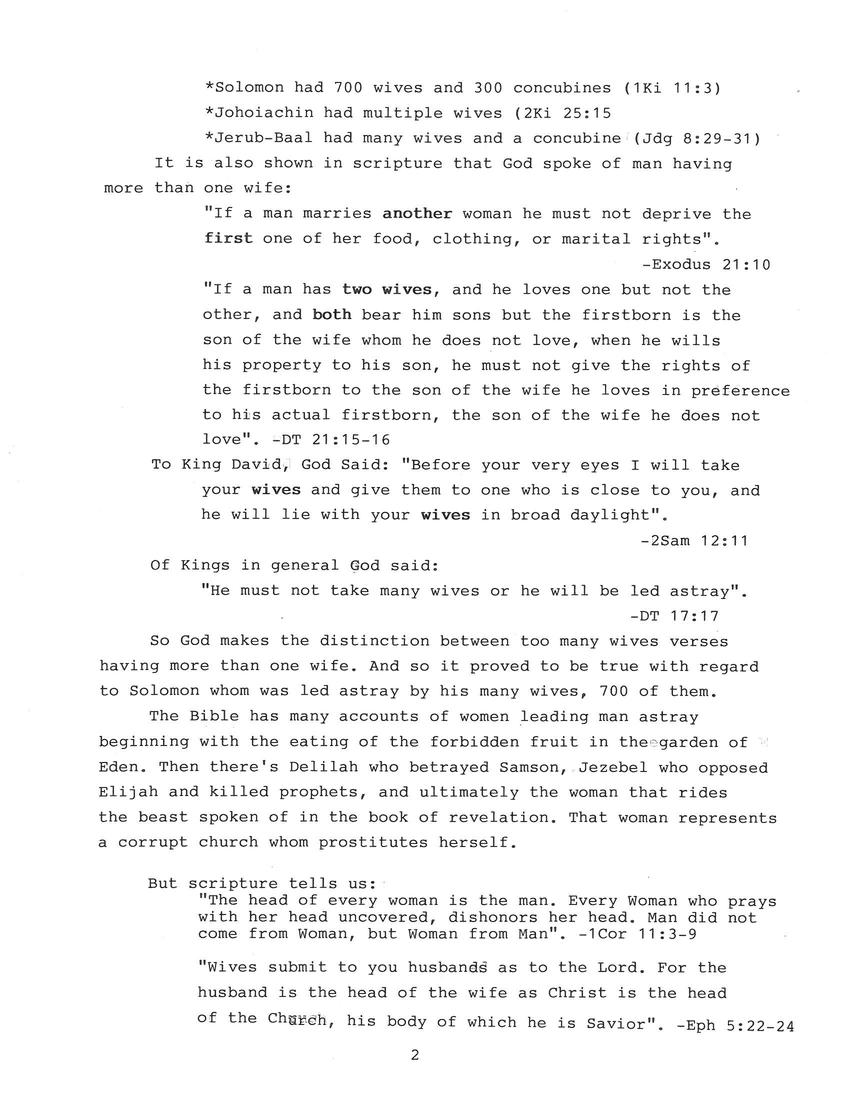 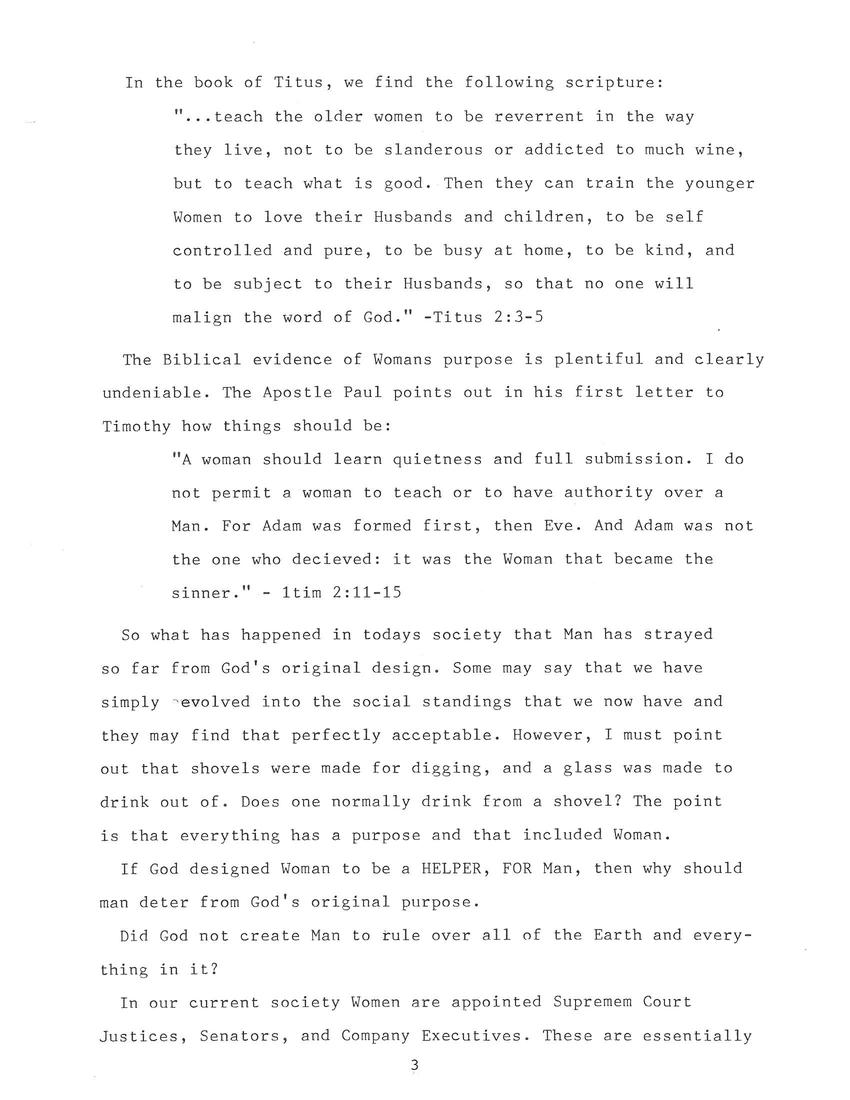 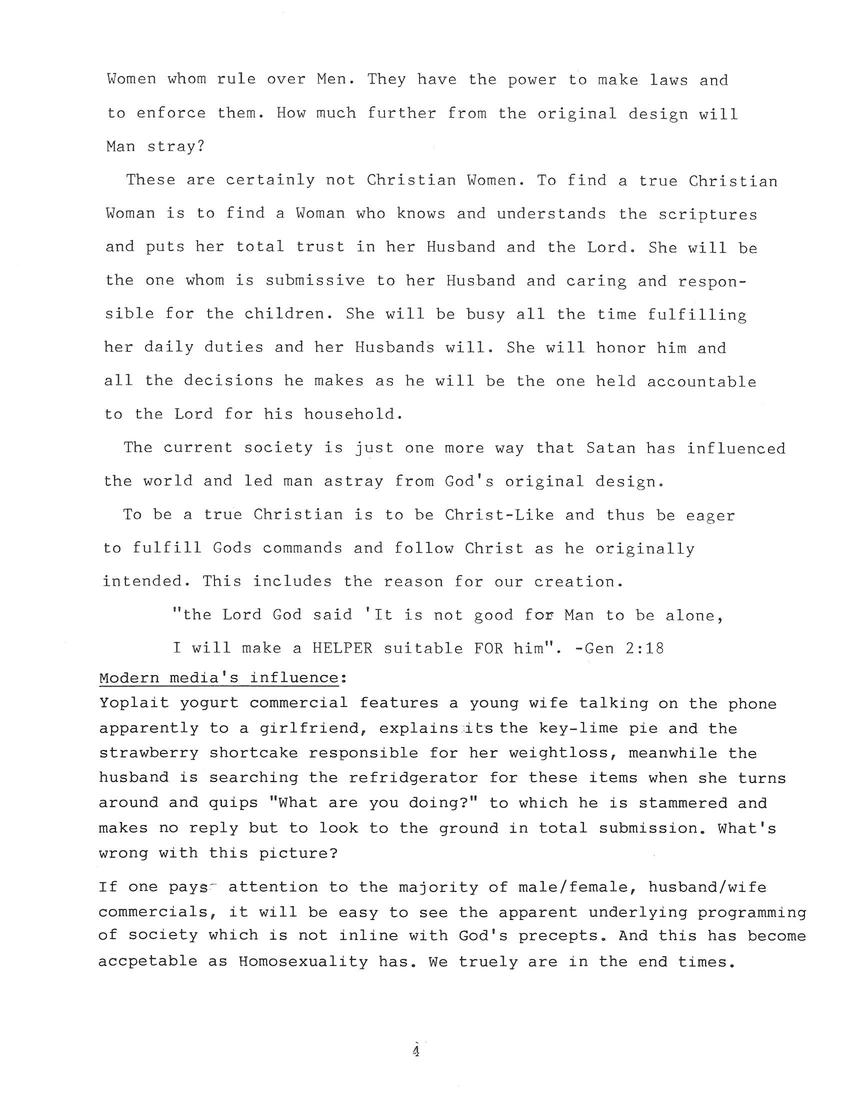 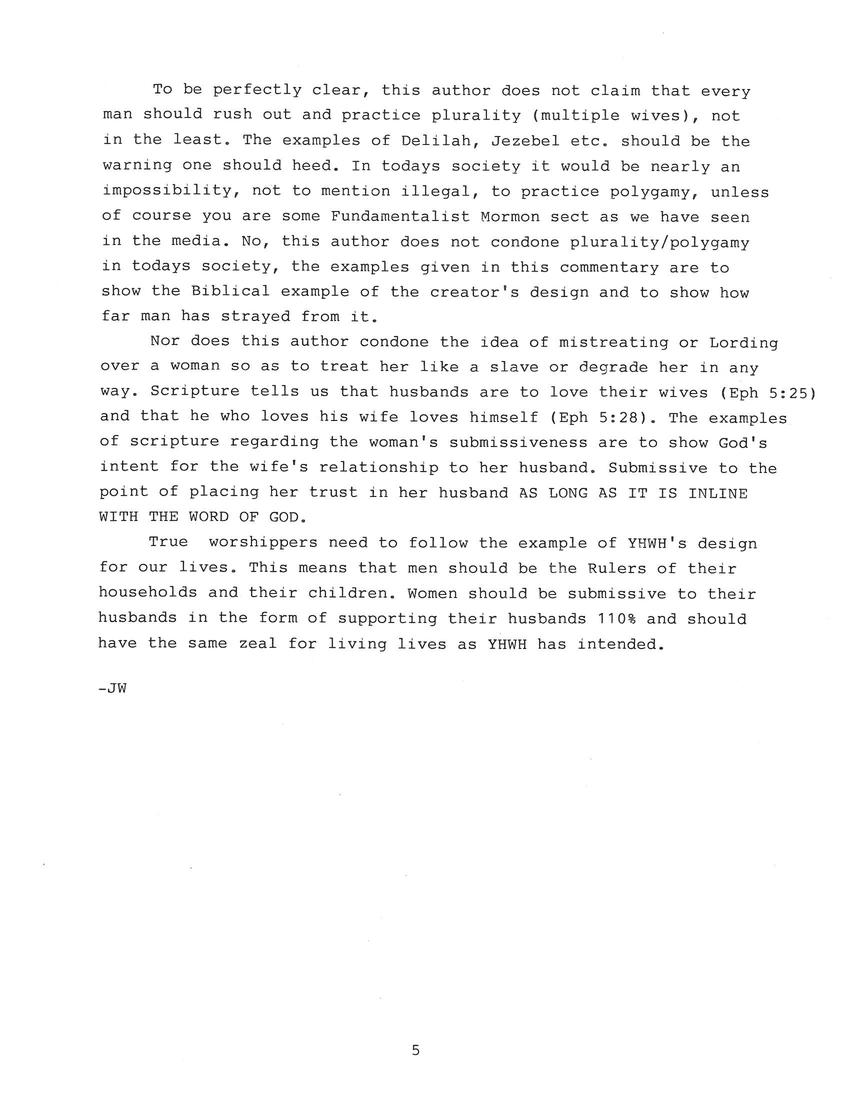 THE PURPOSE OF WOMAN
By: John Weston

And God said: "Let Us make Man in Our image, according to Our likeness, and let them rule over the fish of the sea, and over the birds of the heavens, and over the livestock, and over all the creatures that creep on the Earth". - Gen 1:26

When Man ate of the tree that was forbidden by God, he was told: "Because you have listened to the voice of your wife, and eaten of the tree...cursed is the ground because of you". - Gen 3:17

And to the Woman he said "Your desire shall be for your husband and he shall rule over you". - Gen 3:16

Throughout the Bible the emphasis has been on the Man as ruler on the earth. It is the Man's seed that carries the bloodline, and so the lineages list the Men and their sons and their sons after them.

It is also shown in scripture that God spoke of man having more than one wife:

"If a man marries another woman he must not deprive the first one of her food, clothing, or marital rights." - Exodus 21:10

To King David, God said: "Before your very eyes I will take your wives and give them to one who is close to you, and he will lie with your wives in broad daylight." - 2 Sam 12:11

So God makes the distinction between too many wives versus having more than one wife. And so it proved to be true with regard to Solomon whom was led astray by his many wives, 700 of them.

The Bible has many accounts of women leading man astray, beginning with the eating of the forbidden fruit in the garden of Eden. Then there's Delilah who betrayed Samson, Jezebel who opposed Elijah and killed prophets, and ultimately the woman that rides the beast spoken of in the Book of Revelation. That woman represents a corrupt church whom prostitutes herself.

But scripture tells us: "The head of every woman is the man. Every Woman who prays with her head uncovered, dishonors her head. Man did not come from Woman, but Woman from Man." - 1 Cor 11:3-9

In the book of Titus, we find the following scripture: "...teach the older women to be reverent in the way they live, not to be slanderous or addicted to much wine, but to teach what is good. Then they can train the younger Women to love their Husbands and children, to be self controlled and pure, to be busy at home, to be kind, and to be subject to their Husbands, so that no one will malign the word of God." - Titus 2:3-5

The Biblical evidence of Woman's purpose is plentiful and clearly undeniable. The Apostle Paul points out in his first letter to Timothy how things should be: "A woman should learn quietness and full submission. I do not permit a woman to teach or to have authority over a Man. For Adam was formed first, then Eve. And Adam was not the one who deceived: it was the Woman that became the sinner." - 1 Tim 2:11-15

So what has happened in today's society that Man has strayed so far from God's original design. Some may say that we have simply evolved into the social standings that we now have and they may find that perfectly acceptable. However, I must point out that shovels were made for digging, and a glass was made to drink out of. Does one normally drink from a shovel? The point is that everything has a purpose and that included Woman.

If God designed Woman to be a HELPER, FOR Man, then why should man deter from God's original purpose.

Did God not create Man to rule over all of the Earth and everything in it?

In our current society Women are appointed Supreme Court Justices, Senators, and Company Executives. These are essentially Women whom rule over Men. They have the power to make laws and to enforce them. How much further from the original design will Man stray?

The current society is just one more way that Satan has influenced the world and led man astray from God's original design.

To be a true Christian is to be Christ-Like and thus be eager to fulfill God's commands and follow Christ as he originally intended. This includes the reason for our creation.

Yoplait yogurt commercial features a young wife talking on the phone, apparently to a girlfriend, explains it's the key-lime pie and the strawberry shortcake responsible for her weight loss, meanwhile the husband is searching the refrigerator for these items when she turns around and quips "What are you doing?", to which he is stammered and makes no reply but to look to the ground in total submission. What's wrong with this picture?

If one pays attention to the majority of male/female, husband/wife commercials, it will be easy to see the apparent underlying programming of society which is not in line with God's precepts. And this has become acceptable as Homosexuality has. We truly are in the end times.

To be perfectly clear, this author does not claim that every man should rush out and practice plurality (multiple wives), not in the least. The examples of Delilah, Jezebel etc. should be the warning one should heed. In today's society it would be nearly an impossibility, not to mention illegal, to practice polygamy, unless of course you are some Fundamentalist Mormon sect as we have seen in the media. No, this author does not condone plurality/polygamy in today's society, the examples given in this commentary are to show the Biblical example of the creator's design and to show how far man has strayed from it.

Nor does this author condone the idea of mistreating or Lording over a woman so as to treat her like a slave or degrade her in any way. Scripture tells us that husbands are to love their wives (Eph 5:25) and that he who loves his wife loves himself (Eph 5:28). The examples of scripture regarding the woman's submissiveness are to show God's intent for the wife's relationship to her husband. Submissive to the point of placing her trust in her husband AS LONG AS IT IS IN LINE WITH THE WORD OF GOD.

True worshippers need to follow the example of YHWH's design for our lives. This means that men should be the Rulers of their households and their children. Women should be submissive to their husbands in the form of supporting their husbands 110% and should have the same zeal for living lives as YHWH has intended.