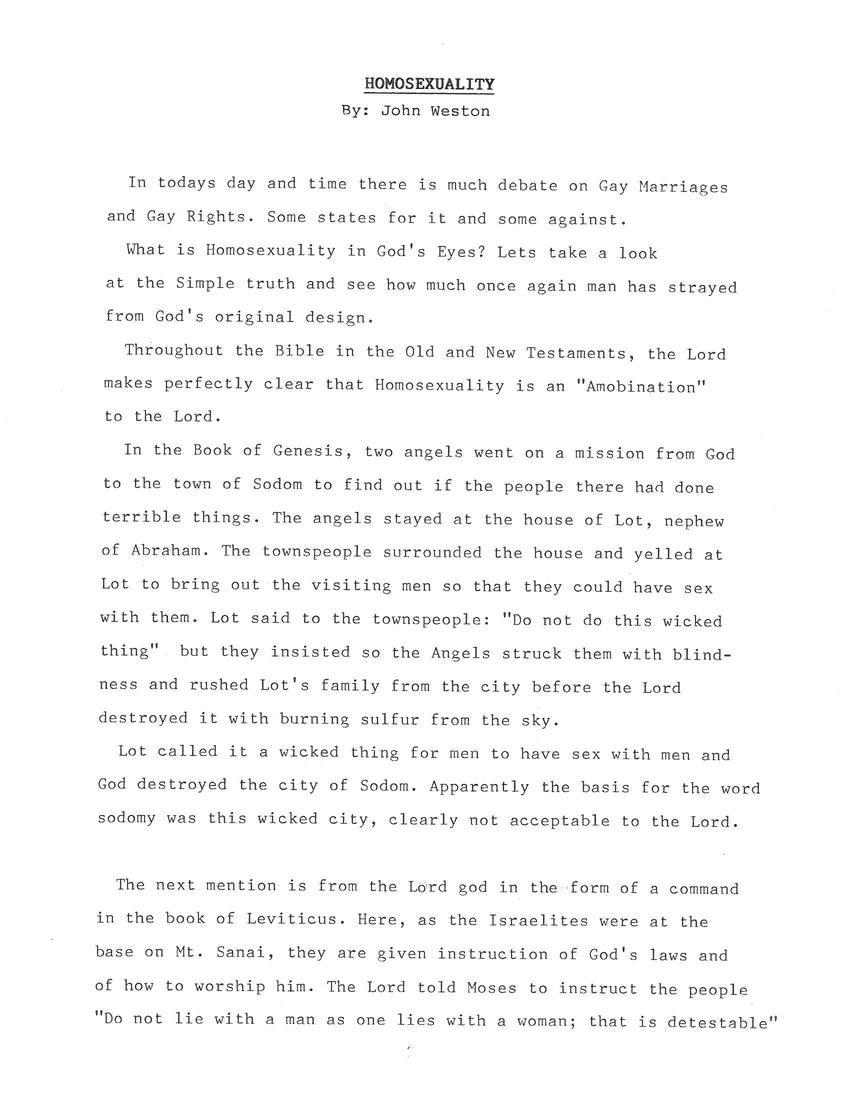 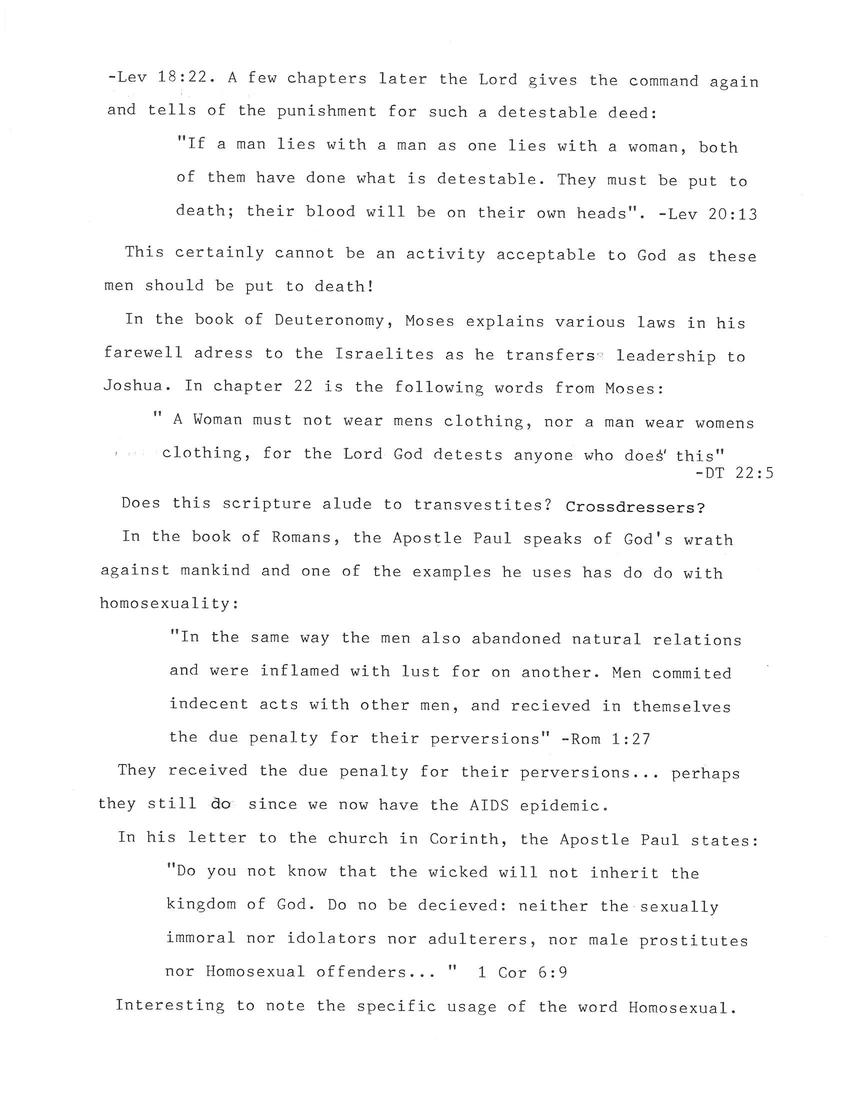 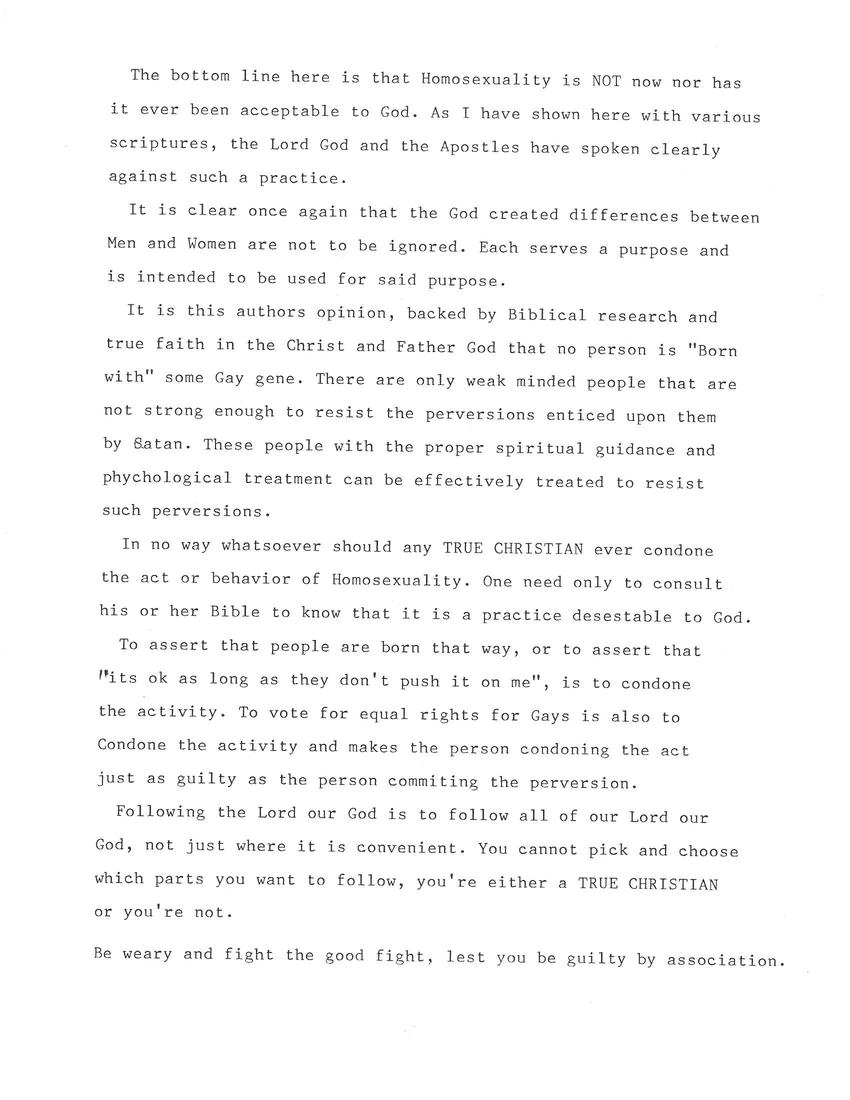 In today's day and time, there is much debate on gay marriages and gay rights. Some states say for it and some against it. What is homosexuality in God's eyes? Let's take a look at the simple truth and see how much, once again, man has strayed from God's original design.

Throughout the Bible in the Old and New Testaments, the Lord makes perfectly clear that homosexuality is an "abomination" to the Lord.

In the Book of Genesis, two angels went on a mission from God to the town of Sodom to find out if the people there had done terrible things. The angels stayed at the house of Lot, nephew of Abraham. The townspeople surrounded the house and yelled at Lot to bring out the visiting men so that they could have sex with them. Lot said to the townspeople, "Do not do this wicked thing," but they insisted. So the angels struck them with blindness and rushed Lot's family from the city before the Lord destroyed it with burning sulfur from the sky.

Lot called it a wicked thing for men to have sex with men, and God destroyed the city of Sodom. Apparently, the basis for the word "sodomy" was this wicked city. Clearly not acceptable to the Lord.

The next mention is from the Lord, god in the form of a command in the book of Leviticus. Here, as the Israelites were at the base of Mt. Sanai, they are given instructions of God's law and how to worship Him. The Lord told Moses to instruct the people. "Do not lie with a man as one lies with a woman; that is detestable." -Lev 18:22

A few chapters later, The Lord gives the command again and tells the punishment for the deed:
"If a man lies with a man as one lies with a woman, both of them have done what is detestable. They must be put to death; their blood will be on their own heads." -Lev 20:13

In the book of Deuteronomy, Moses explains various laws in his farewell address to the Israelites as he transfers leadership to Joshua. In chapter 22, Moses says:
"A woman must not wear men's clothing, nor a man wear women's clothing, for the Lord God detests anyone who does this."
-DT 22:5

Does this scripture allude to transvestites? Crossdressers?

In the book of Romans, the Apostle Paul speaks of God's wrath against mankind. One of the examples he uses has to do with homosexuality:
"In the same way the men also abandoned natural relations and were inflamed with lust for another. Men committed indecent acts with other men, and received in themselves the due penalty for their perversions."
-Rom 1:27

Perhaps they still do, since we now have the AIDS epidemic.

In his letter to the church in Corinth, the Apostle Paul states:
"Do you not know that the wicked will not inherit the kingdom of God. Do not be deceived: neither the sexually immoral nor idolators nor adulterers, nor male prostitutes nor homosexual offenders..."
-1 Cor 6:9

Interesting to note the specific usage of "homosexual".

The bottom line here is that homosexuality is NOT now nor ever been acceptable to God. As I have shown here with various scriptures, the Lord God and the Apostles have spoken clearly against such a practice.

It is clear once again that God created differences between men and women that are not to be ignored. Each serves a purpose and should be used for said purpose.

It is this author's opinion, backed by biblical research and true faith in Christ and Father God, that no person is "born with" some gay gene. There are only weak-minded people who are not strong enough to resist the perversions enticed on them by Satan. With proper spiritual guidance and psychological treatment, these people can be effectively treated to resist such perversions.

Following the Lord, our God, is to follow all of our Lord not just where it is convenient. You cannot pick and choose which parts you want to follow. You're either a TRUE CHRISTIAN or you're not.

Be weary and fight the good fight, lest you be guilty by association.

Thank God you are locked up and unable to vote! You have so much to learn. I hope and pray you don't have children because God forbid they turn out to be homosexual and have to hear you condemning them their whole life. Until you can walk in ones shoes, who are you to judge?!

You have no idea what you are talking about... so what AIDS epidemic only applies to homosexuals? Heterosexuals are applicable too. Looks like you need to study more than the just the bible where you are supposedly getting these scriptures from.

I don't know what God you believe in, but the real the God doesn't judge. HE loves loves all and gave HIS son for our sins. We were not made perfect yet HE did make us this way REGARDLESS of what you may think.

Hopefully you are a felon, so we won't have to worry about you ever being able to vote against what homosexuals deserve - THE SAME RIGHTS AS EVERY OTHER HUMAN BEING! 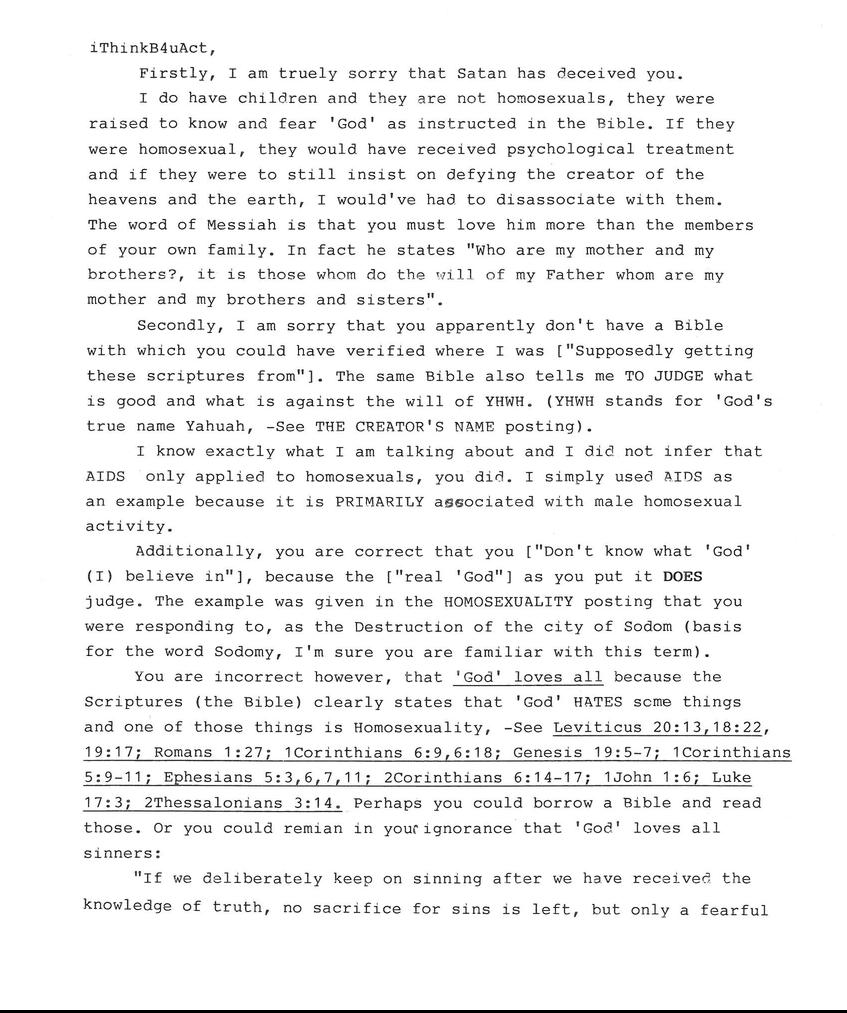 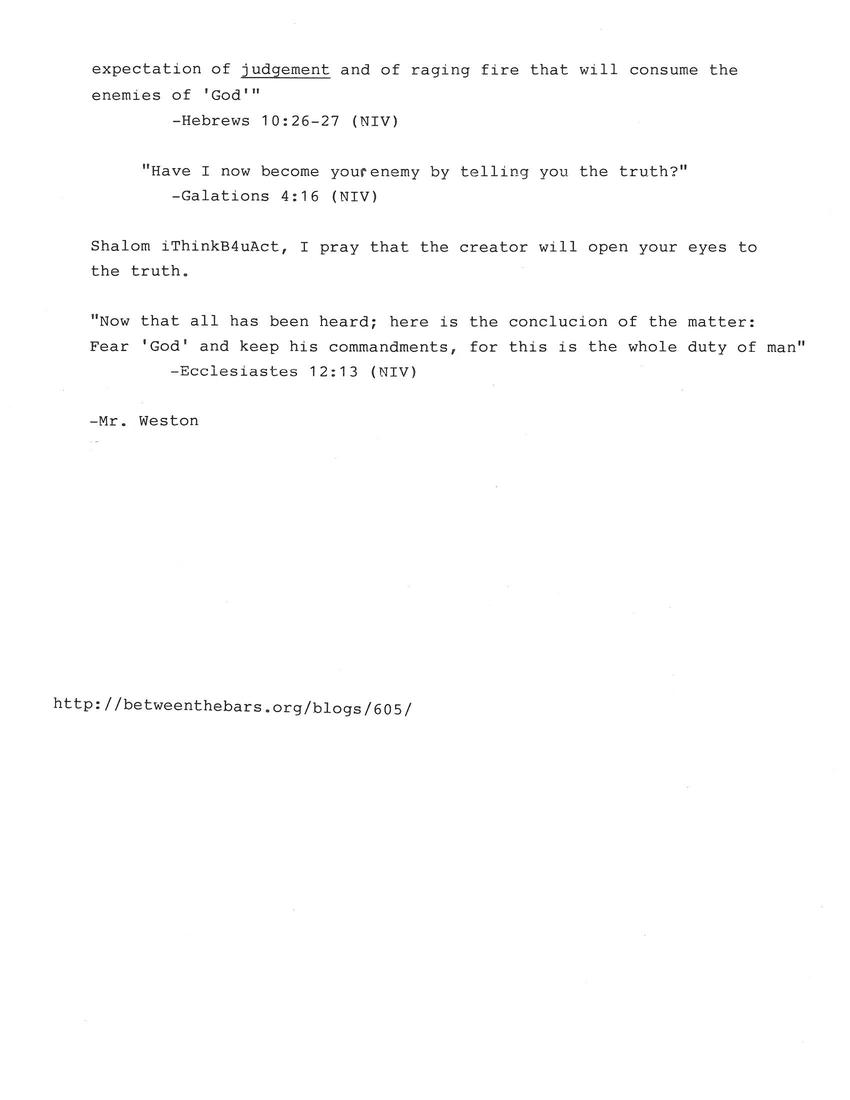 IGNORANCE IS A BLISS... NO NEED TO RESPOND.