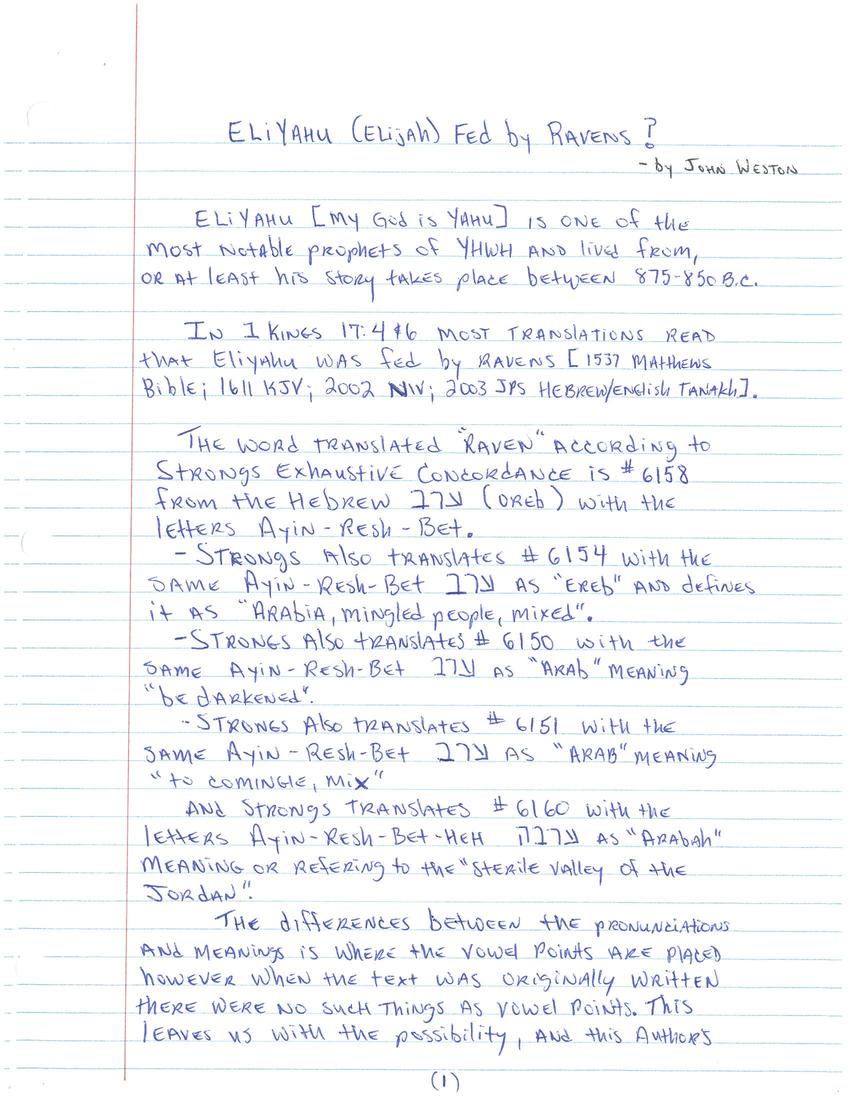 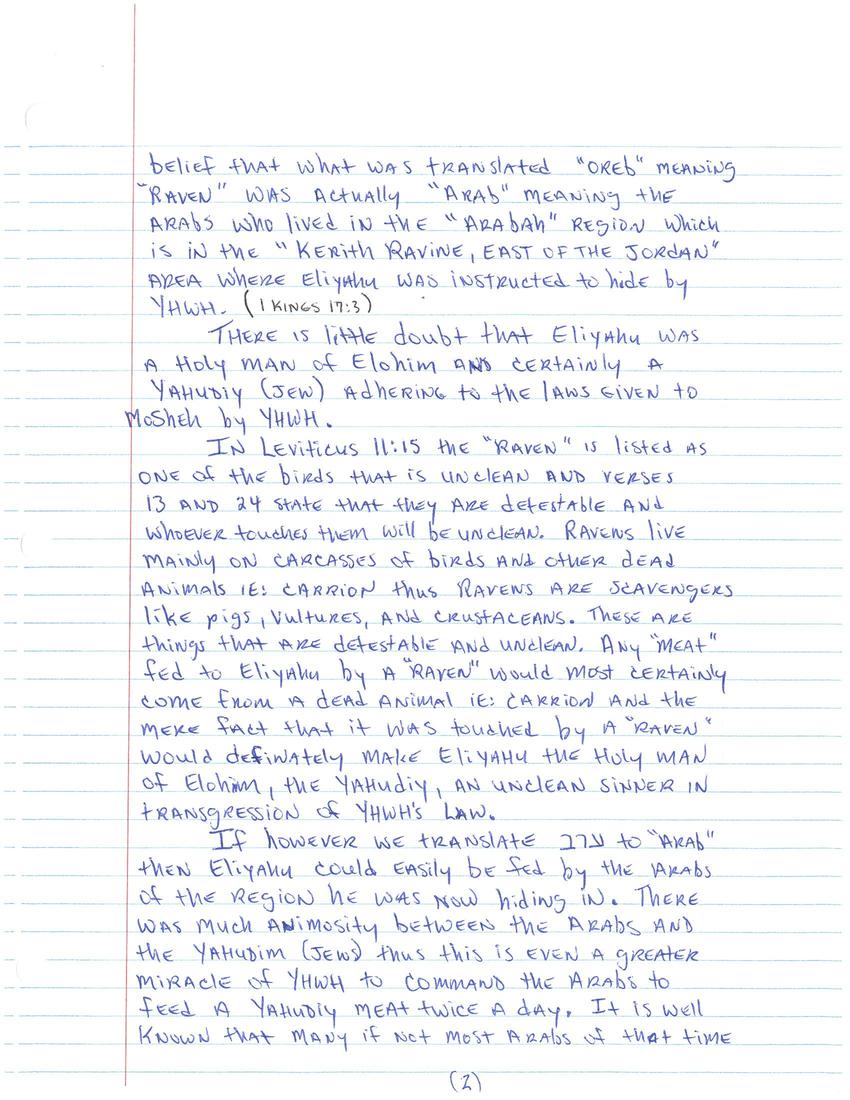 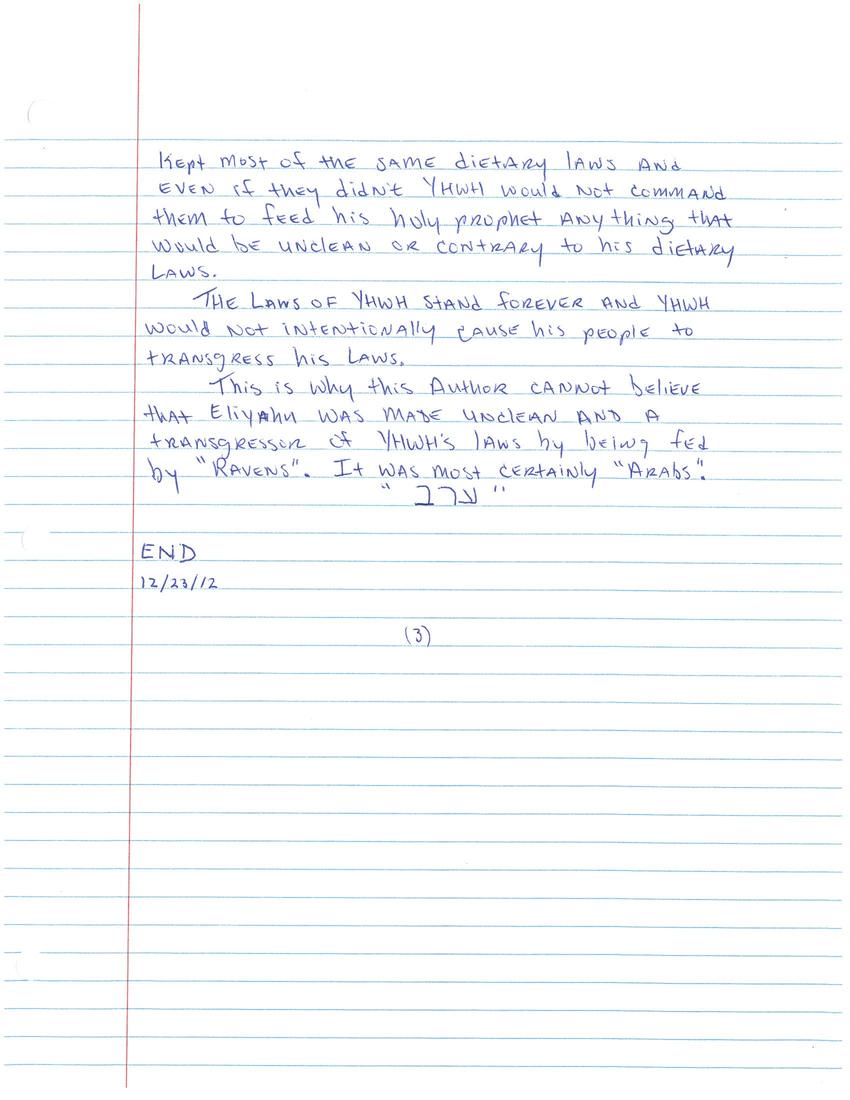 Eliyahu [my god is Yahu] is one of the most notable prophets of YHWH and lived from, or at least his story takes place between, 875-850 B.C.

The word translated "raven" according to Strong's exhaustive concordance is #6158 from the Hebrew [Hebrew writing] (oreb) with the letters Ayin-Resh-Bet.

- Strong's also translates #6154 with the same Ayin-Resh-Bet as "ereb" and defines it as "Arabia, mingled people, mixed".

- Strong's also translates #6150 with the same Ayin-Resh-Bet as "Arab" meaning "be darkened".

- Strong's also translates #6151 with the same Ayin-Resh-Bet as "Arab" meaning "to comingle, mix".

And Strong's translates #6160 with the letters Ayin-Resh-Bet-Heh as "Arabah" meaning or referring to the "sterile valley of the Jordan".

The differences between the pronunciations and meanings is where the vowel points are placed, however when the text was originally written there were no such things as vowel points. This leaves us with the possibility, and this author's belief that what was translated "oreb" meaning "raven" was actually "Arab" meaning the Arabs who lived in the "Arabah" region, which is in the "Kerith Ravine, east of the Jordan" area where Eliyahu was instructed to hide by YHWH. (1 Kings 17:3)

There is little doubt that Eliyahu was a holy man of Elohim and certainly a yahudiy (Jew) adhering to the laws given to Mosheh by YHWH.

In Leviticus 11:15 the "raven" is listed as one of the birds that is unclean and verses 13 and 24 state that they are detestable and whoever touches them will be unclean. Ravens live mainly on carcasses of birds and other dead animals i.e. carrion thus ravens are scavengers like pigs, vultures and crustaceans. These are things that are detestable and unclean. Any "meat" fed to Eliyahu by a "raven" would most certainly come from a dead animal i.e. carrion and the mere fact that it was touched by a "raven" would definitely make Eliyahu the holy man of Elohim, the Yahudiy, an unclean sinner in transgression of YHWH's law.

If, however, we translate [Hebrew writing] to "Arab", then Eliyahu could easily be fed by the Arabs of the region he was now hiding in. There was much animosity between the Arabs and the Yahudim (Jews), thus this is even a greater miracle of YHWH to command the Arabs to feed a Yahudiy meat twice a day. It is well known that many if not most Arabs of that time kept most of the same dietary laws and even if they didn't YHWH would not command them to feed his holy prophet anything that would be unclean or contrary to his dietary laws.

The laws of YHWH stand forever and YHWH would not intentionally cause his people to transgress his laws.

This is why this author cannot believe that Eliyahu was made unclean and a transgressor of YHWH's laws by being fed by "ravens". It was most certainly "Arabs".