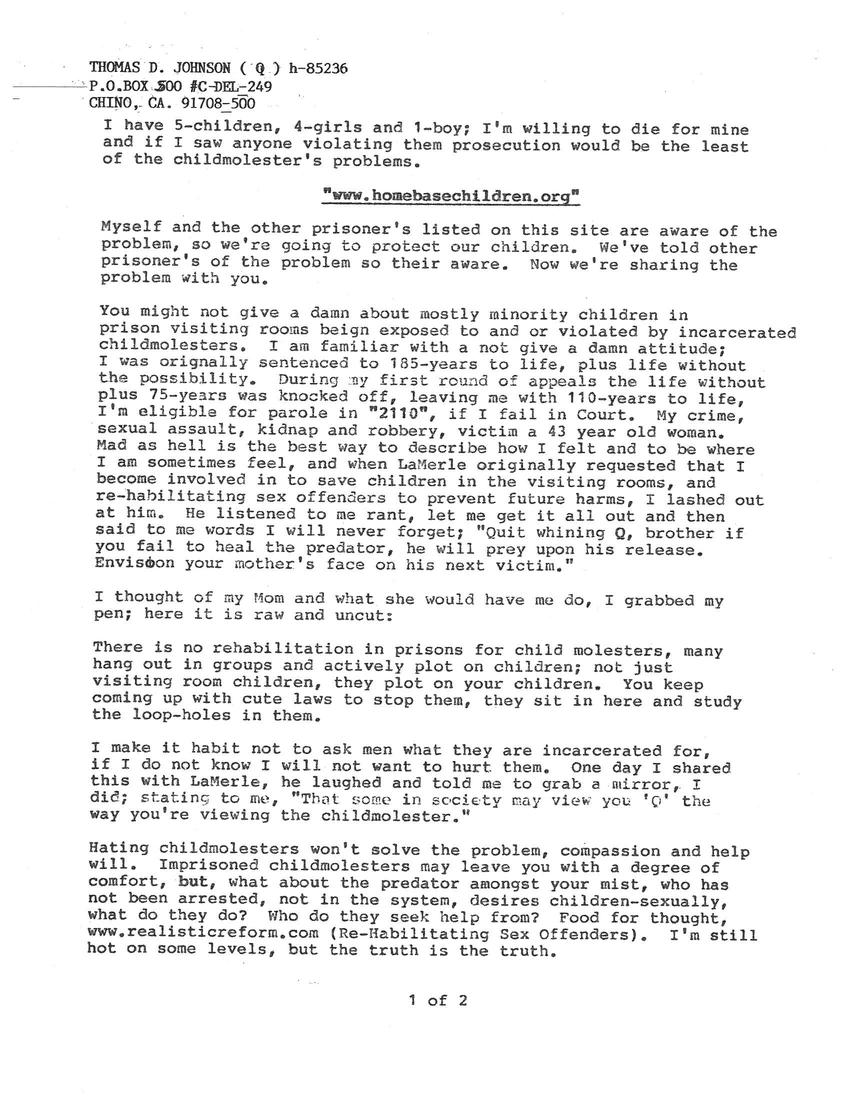 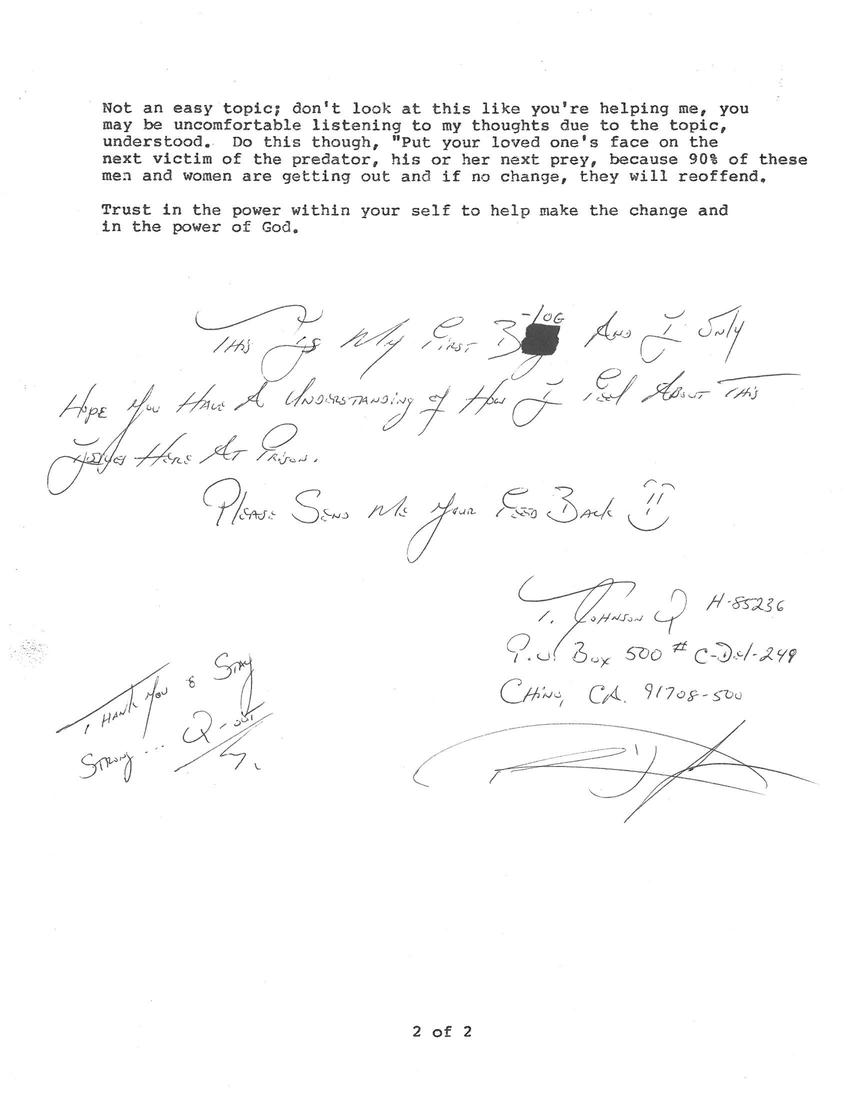 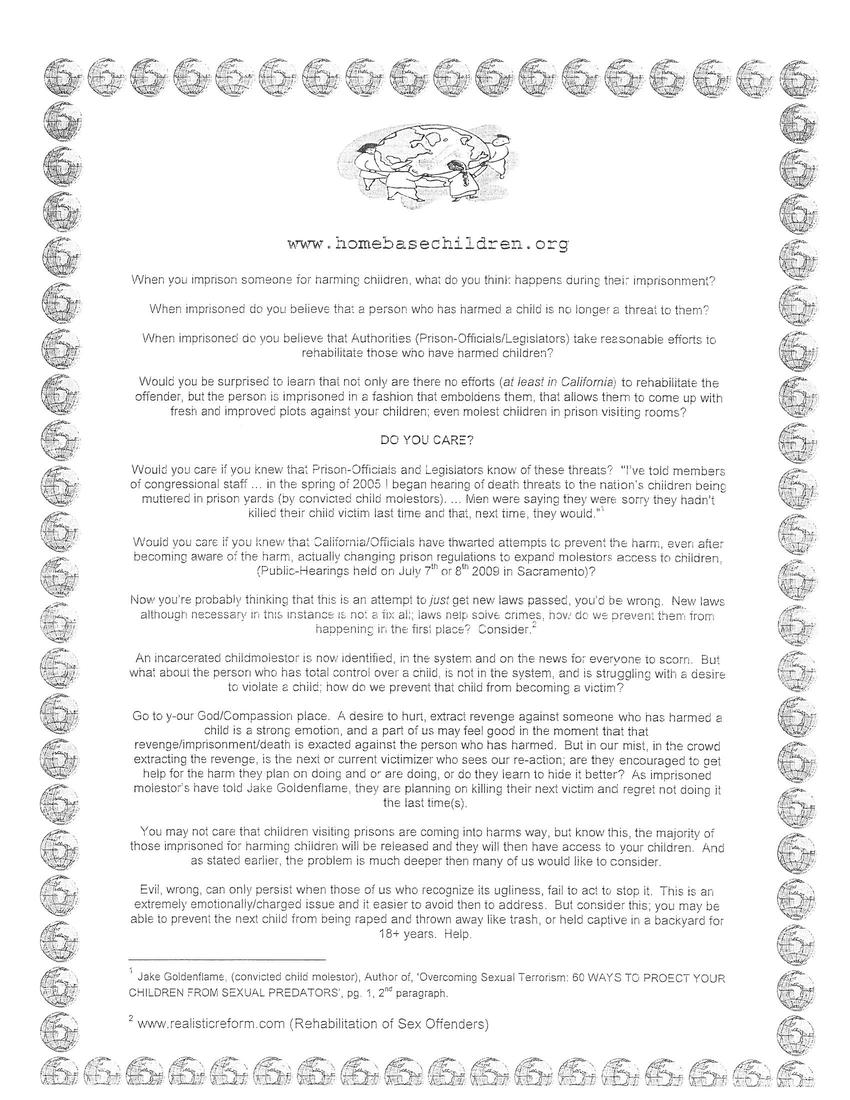 I have five children - four girls one boy; I'm willing to die for mine and if I saw anyone violating them prosecution would be the least of the child molester's problems.

You might not give a damn about mostly minority children in prison visiting rooms being exposed to and/or violated by incarcerated child molesters. I am familiar with a not-give-a-damn attitude; I was originally sentenced to 185 years to life, plus life without the possibility. During my first round of appeals the life without plus 75 years was knocked off, leaving me with 110 years to life, and I'm eligible for parole in "2110", if I fail in Court. My crime, sexual assault, kidnap and robbery, victim a 43-year-old woman. Mad as hell is the best way to describe how I felt and to be where I am sometimes feel, and when LaMerle originally requested that I become involved in to save children in the visiting rooms, and rehabilitating sex offenders to prevent future harms, I lashed out at him. He listened to me rant, let me get it all out and then said to me words I will never forget: "Quit whining Q, brother if you fail to heal the predator, he will prey upon his release. Envision your mother's face on his next victim."

I thought of my mom and what she would have me do, and I grabbed my pen; here is is raw and uncut:

There is no rehabilitation in prisons for child molesters, many hang out in groups and actively plot on children; not just visiting room children, they plot on your children. You keep coming up with cute laws to stop them, they sit in here and study the loopholes in them.

I make it habit not to ask men what they are incarcerated for, if I do not know I will not want to hurt them. One day I shared this with LaMerle, he laughed and told me to grab a mirror, I did; stating to me that, "Some in society may view you 'Q' the way you're viewing the child molester."

Hating child molesters won't solve the problem, compassion and help will. Imprisoned child molesters may leave you with a degree of comfort, but what about the predator amongst your midst, who has not been arrested, not in the system, desires children, sexually, what do they do? Who do they seek help from? Food for thought, www.realisticreform.com (Rehabilitating Sex Offenders). I'm still hot on some levels, but the truth is the truth.

Not an easy topic; don't look at this like you're helping me, you may be uncomfortable listening to my thoughts due to the topic, understood. Do this though, "Put your loved one's face on the next victim of the predator, his or her next prey, because 90% of these men and women are getting out and if no change, they will reoffend."

This is my first blog and I only hope you have an understanding of how I feel about the issues here at prison.

Please send me your feedback [Drawing of smiley face]

When you imprison someone for harming children, what do you think happens during their imprisonment?

When imprisoned do you believe that a person who has harmed a child is no longer a threat to them?

When imprisoned do you believe that Authorities (Prison Officials/Legislators) take reasonable efforts to rehabilitate those who have harmed children?

Would you be surprised to learn that not only are there no efforts (at least in California) to rehabilitate the offender, but the person is imprisoned in a fashion that emboldens them, that allows them to come up with fresh and improved plots against your children; even molest children in prison visiting rooms?

Would you care if you knew that Prison Officials and Legislators know of these threats? "I've told members of Congressional staff...in the Spring of 2005 I began hearing of death threats to the nation's children being muttered in prison yards (by convicted child molesters)...Men were saying they were sorry they hadn't killed their child victim last time and that, next time, they would."1

Would you care if you knew that California Officials have thwarted attempts to prevent the harm, even after becoming aware of the harm, actually changing prison regulations to expand molesters' access to children (Public Hearings held on July 7th or 8th 2009 in Sacramento)?

Now you're probably thinking that this is an attempt to just get new laws passed, you'd be wrong. New laws, although necessary in this instance, are not a fix-all; laws help solve crimes, how do we prevent them from happening in the first place? Consider,2

An incarcerated child molester is now identified, in the system and on the news for everyone to scorn. But what about the person who has total control over a child, is not in the system, and is struggling with a desire to violate a child; how do we prevent that child from becoming a victim?

Go to your God/Compassion place. A desire to hurt, extract revenge against someone who has harmed a child is a strong emotion, and a part of us may feel good in the moment that revenge/imprisonment/death is exacted against the person who has harmed. But in our midst, in the crowd exacting the revenge, is the next or current victimizer who sees our reaction; are they encouraged to get help for the harm they plan on doing and/or are doing, or do they learn to hide it better? As imprisoned molesters have told Jake Goldenflame, they are planning on killing their next victim and regret not doing it the last time(s).

You may not care that children visiting prisons are coming into harm's way, but know this: the majority of those imprisoned for harming children will be released and they will then have access to your children. And as stated earlier, the problem is much deeper than many of us would like to consider.

Evil, wrong can only persist when those of us who recognize its ugliness fail to act to stop it. This is an extremely emotionally charged issue and it's easier to avoid than to address. But consider this: you may be able to prevent the next child from being raped and thrown away like trash, or held captive in a backyard for 18+ years. Help.