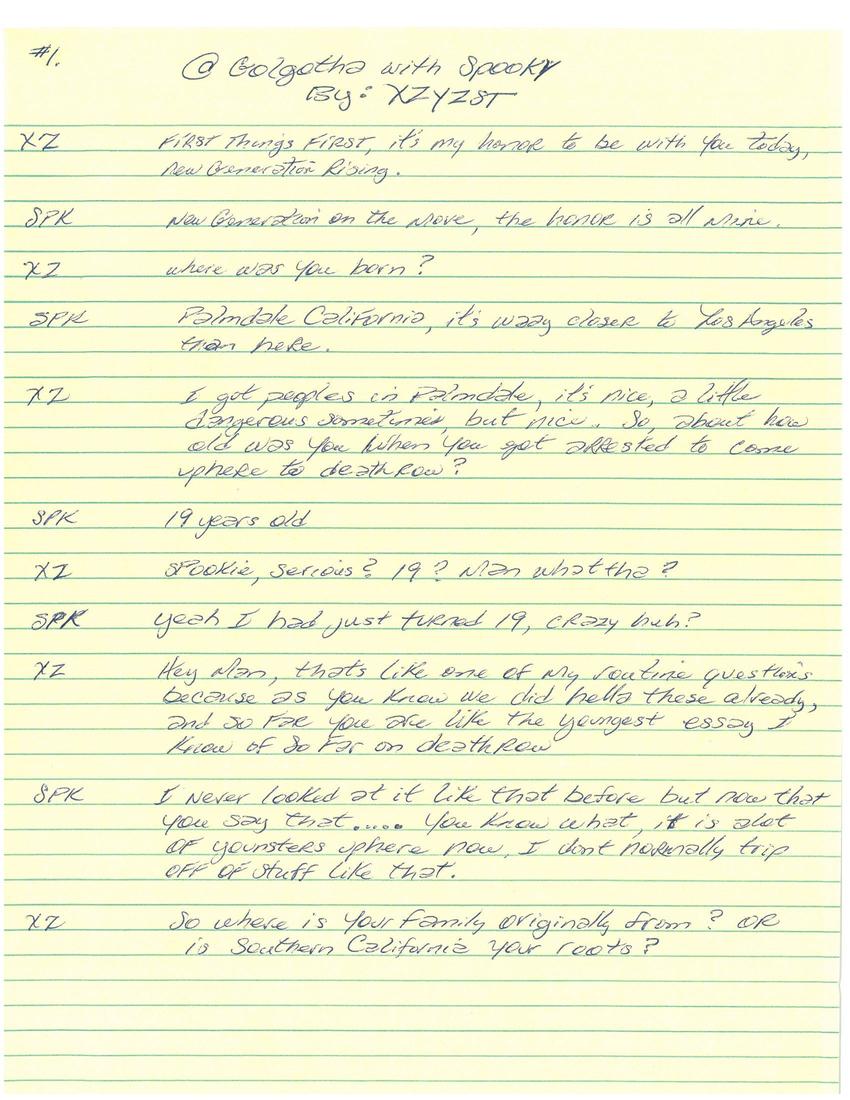 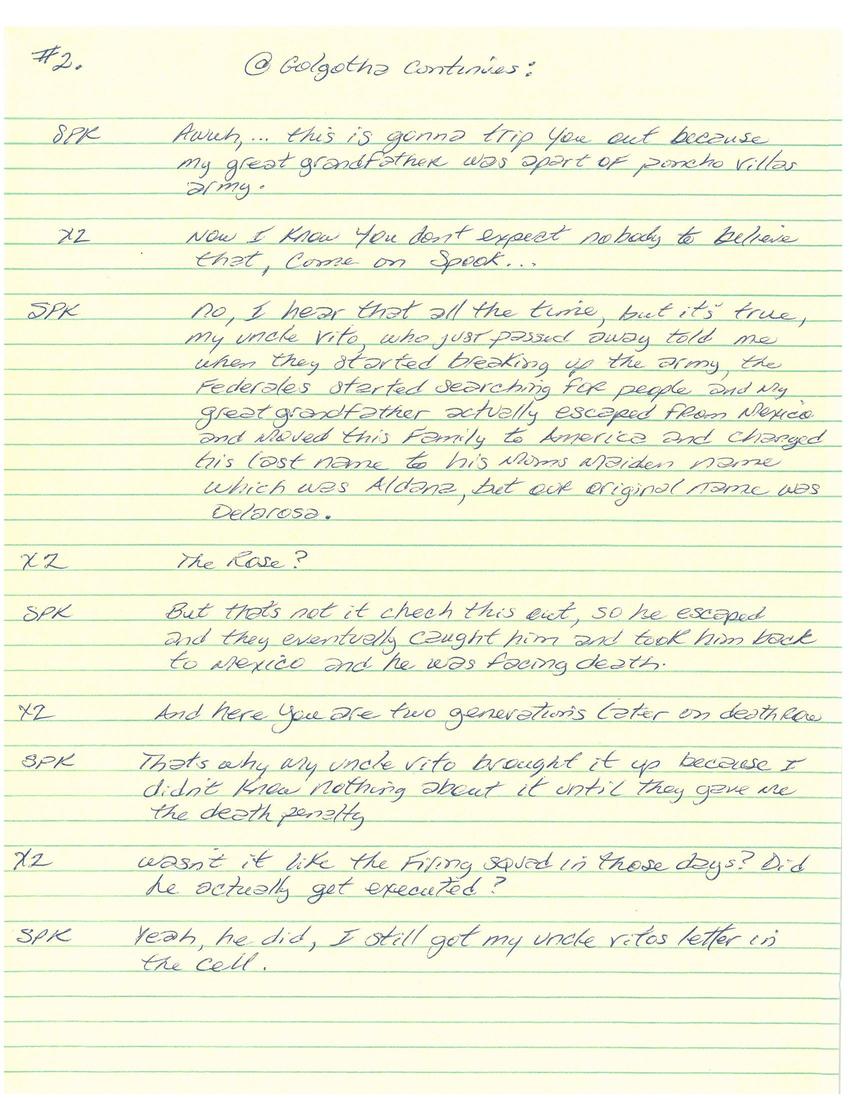 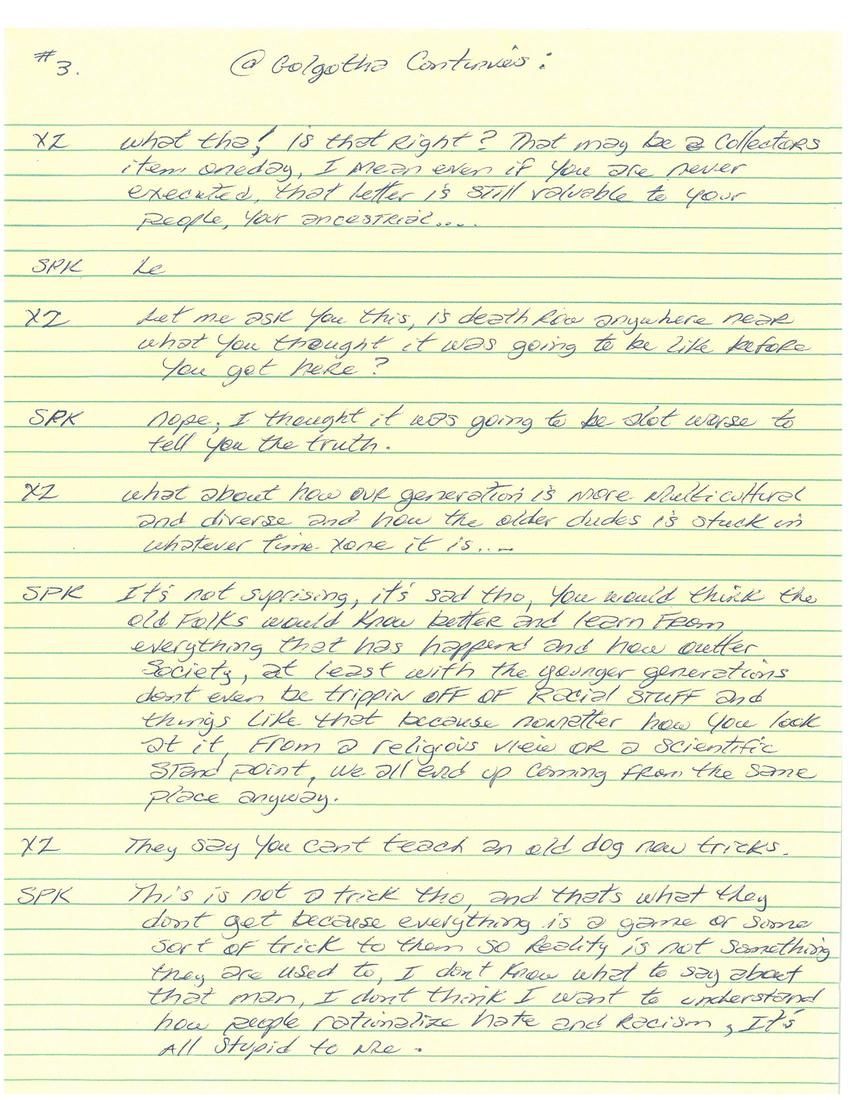 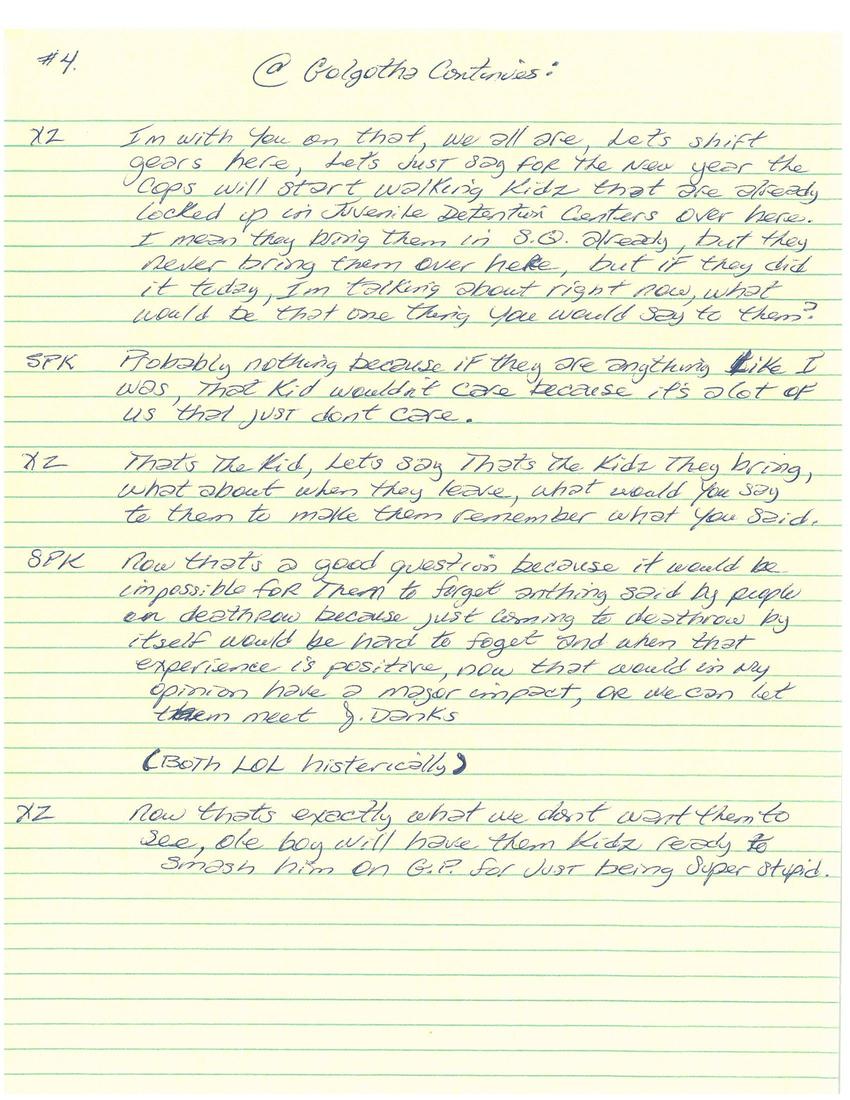 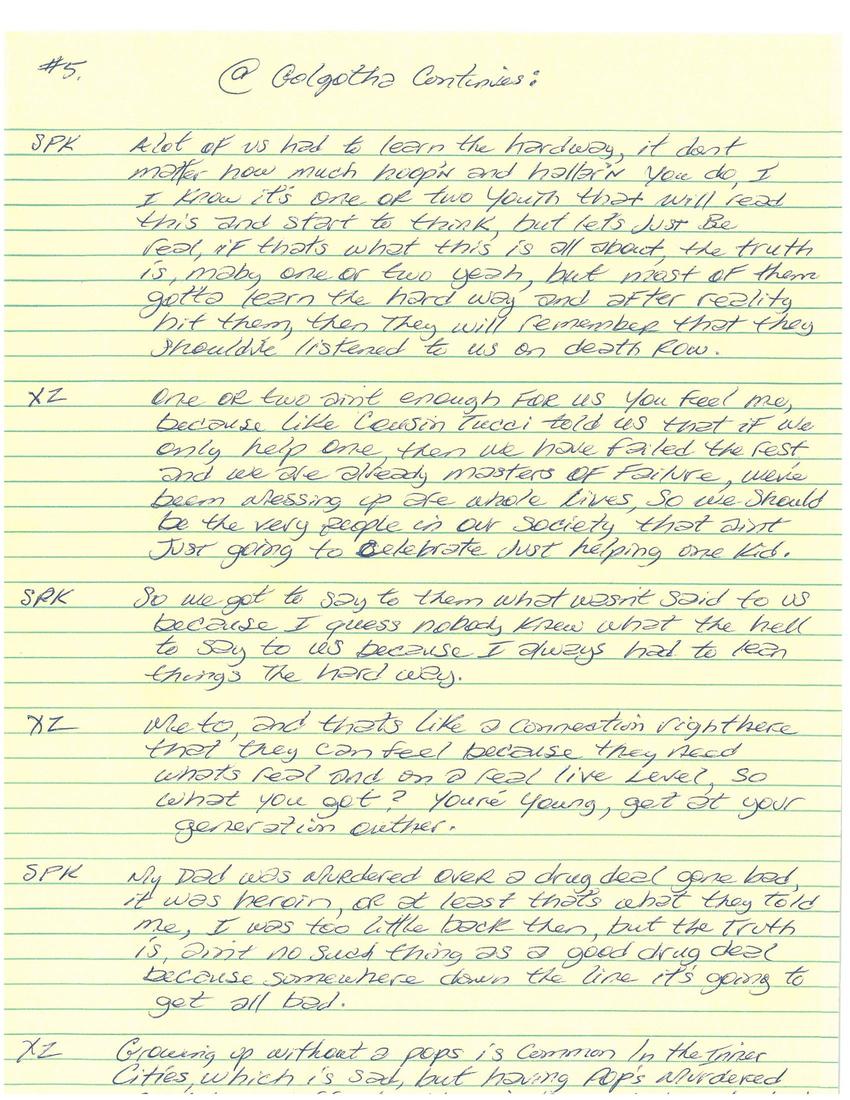 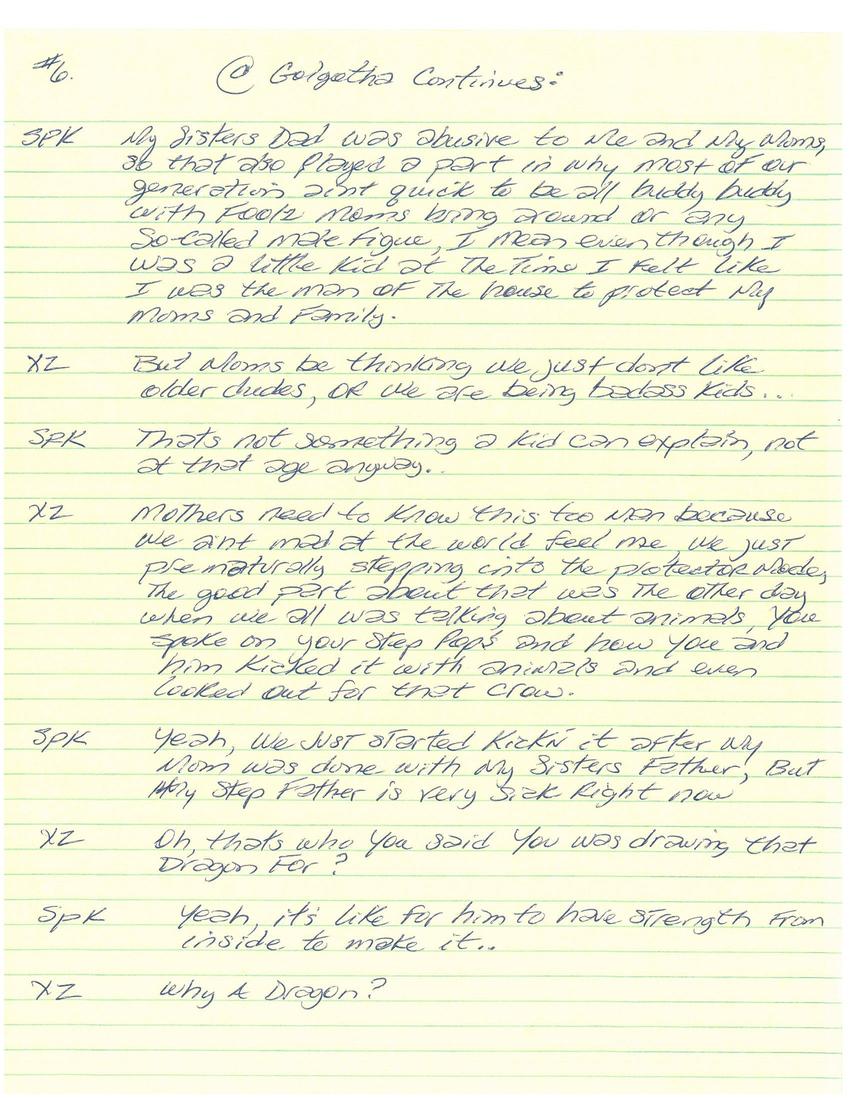 @ Golgotha with Spooky
By: XZYZST

XZ First things first, it's my honor to be with you today, new generation rising.

SPK New generation on the move, the honor is all mine.

XZ Where was you born?

XZ I got peoples in Palmdale, it's nice, a little dangerous sometimes, but nice. So, about how
old was you when you got arrested to come uphere to deathrow?

XZ Hey man, that's like one of my routine questions because as you know we did hella these already and do far you are like the youngest essay I know of so far on deathrow.

SPK I never looked at it like that before but now that you say that.....you know what, it is alot of youngsters uphere now. I don't normally trip off of stuff like that.

XZ So where is your family originally from? Or is Southern California your roots?

SPK Awuh...this is gonna trip you out because
my great grandfather was apart of poncho villas army.

XZ Now I know you don't expect nobody to believe that, come on Spook...

SPK No, I hear that all the time, but it's true, my uncle vito, who just passed away told mewhen they started breaking up the army, theFederales started searching for people and my great grandfather actually escaped from Mexicoand moved this family to America and changed his last name to his Mom's maiden name which was Aldana, but our original name wasDelarosa.

SPK But that's not it check this out, so he escaped and they eventually caught him and took him back to Mexico and he was facing death.

XZ And here you are two generations later on deathrow

SPK That's why my uncle vito brought it up because I didn't know nothing about it until they gave me the death penalty.

XZ wasn't it like the firing squad in those days? Did he actually get executed?

SPK Yeah, he did, I still got my uncle vitos letter in the cell.

XZ What tha! Is that right? That may be a collectors item one day, I mean even if you are never executed, that letter is still valuable to your people, your ancestorial...

XZ Let me ask you this, is death row anywhere near what you thought it was going to be like before you got here?

SPK Nope, I thought it was going to be alot worse to tell you the truth.

XZ what about how our generation is more multicultural and diverse and how the older dudes is stuck in whatever time zone it is...

SPK It's not suprising, it's sad tho, you would think the old folks would know better and learn from everything that has happened and how outer society, at least with the younger generations don't even be trippin off of racial stuff and things like that because nomatter how you look at it, from a religious view or a scientific stand point, we all end up coming from the same
place anyway.

SPK This is not a trick tho, and that's what they don't get because everything is a game or some sort of trick to them so reality is not something they are used to, I don't know what to say about that man, I don't think I want to understand how people rationalize hate and racism. It's all stupid to me.

XZ I'm with you on that, we all are, Let's shift gears here. Let's just say for the new year the cops will start walking kidz that are already locked up in Juvenile Detention Centers over here. I mean they bring them in S.Q. already but they never bring them over here, but if they did it today, I'm talking about right now, what would be that one thing you would say to them?

SPK Probably nothing because if they are anything like I was, that kid wouldn't care because it's a lot of us that just don't care.

XZ Thats the kid, let's say thats the kidz they bring, what about when they leave, what would you say to them to make them remember what you said.

SPK Now that's a good question because it would be impossible for them to forget anything said by people on deathrow because just coming to deathrow by itself would be hard to forget and when that experience is positive, now that would in my opinion have a major impact, or we can let them meet J. Danks

XZ Now thats exactly what we don't want them to see, ole boy will have them kidz ready to smash him on G.P. for just being super stupid.

SPK Alot of us had to learn the hard way, it don't matter how much hoop'n and hollar'n you do, I know it's one or two youth that will read this and start to think, but lets just be real, if thats what this is all about, the truth is, maybe one or two yeah, but most of them gotta learn the hard way and after reality hit them then they will remember that they should've listened to us on death row.

XZ One or two ain't enough for us you feel me, because like cousin Tucci told us that if we only help one, then we have failed the rest and we are already masters of failure. We've been messing up our whole lives, so we should be the very people in our society that ain't just going to celebrate just helping one kid.

XZ Me too, and that's like a connection right there that they can feel because they need what's real and on a real live level, so what you got? You're young, get at your generation [illedgible].

SPK My Dad was murdered over a drug deal gone bad, it was heroin, or at least that's what they told me, I was too little back then, but the truth is, ain't no such thing as a good drug deal because somewhere down the line it's going to get all bad.

XZ Growing up without a pops is common in the inner cities, which is sad but having pop's murdered {line cut off]

SPK My sisters Dad was abusive to me and my Mom, so that also played a part in why most of our generation ain't quick to be all buddy buddy with foolz Moms bring around or any so-called male figure. I mean even though I was a little kid at the time I felt like I was the man of the house to protect my Mom and family.

XZ But Moms be thinking we just don't like older dudes, or we are being badass kids...

SPK That's not something a kid can explain, not at that age anyway.

XZ Mothers need to know this too man because we ain't mad at the world feel me. We just are naturally stepping into the protector mode, the good part about that was the other day when we all was talking about animals, you spoke on your step pops and how you and him kicked it with animals and even looked out for that crow.

SPK Yeah, we just started kick'n it after my Mom was done with my sisters father, but my step father is very sick right now.

XZ Oh, thats who you said you was drawing that dragon for?

SPK yeah, it's like for him to have strength from inside to make it..

XZ Why a dragon?

SPK In some cultures, dragons symbolize fire, earth, water and all kinds of things, it's like fear makes dragon's monsters to some, but when one has no fear that same dragon can become a source of strength.

XZ People say that your artwork is better than you think it is.

SPK I'm just never satisfied if my work is not up to my standards.

XZ Are your standars set too high? Or is everybody that see's your dragon standards set too low? Let's put your Uncle's dragon with this.

SPK That's cool because it's my way of saying stay strong no matter what we go through, we always get attacked by something in life and we don't always got a bunch of people to help us in whatever we go through, so I think there is a little dragon of strength in each of us that can come out in those time's when we really need to dig deep in order to survive and my step father is someone that I want to survive in his struggle.

XZ Damn man, for a youngta, that sounded like wisdom, no, let me guess, you hated school?

SPK No, I liked school, I was just bored with thoseteachers, especially the math teacher, man she knew how much I hated math and she would pick me to come up to the board and...man I got to the point where I just nutted up and started tearing everything in the class up.

XZ Spook, she was what, putting you on blast? If she knew you didn't like math how come she didn't ask you to draw on the chalk board a pie or something that was related to the math problem?

SPK She didn't know I could draw and what are you talking about because they took all of the art classes and stuff out of our school. I mean music and everything, so she wasn't no art teacher, she was mteaching me math.

XZ If somebody would've put you in art school, would you be on deathrow right now?

SPK I'm not going to say that but, you know what my uncle vito would show me some stuff when we visited him in Los Angeles so in retrospect, after all of the B.S. is set aside, no, what I needed was rehab man.

SPK Just being honest with myself, if rehab works, I'd have to say, no I would not be on deathrow right now, I never been, so I don't know if it works, I think younsters need to say what they need, instead of people telling them what they need.

XZ And with that, I must say, take me with you when you come into your kingdom; in fact take all of the youth with you to a greater existance than how these streets and prison are now.

SPK Want to play some UNO?

XZ Hell yeah, my daughter taught me how to play in the visitors room, bring it.