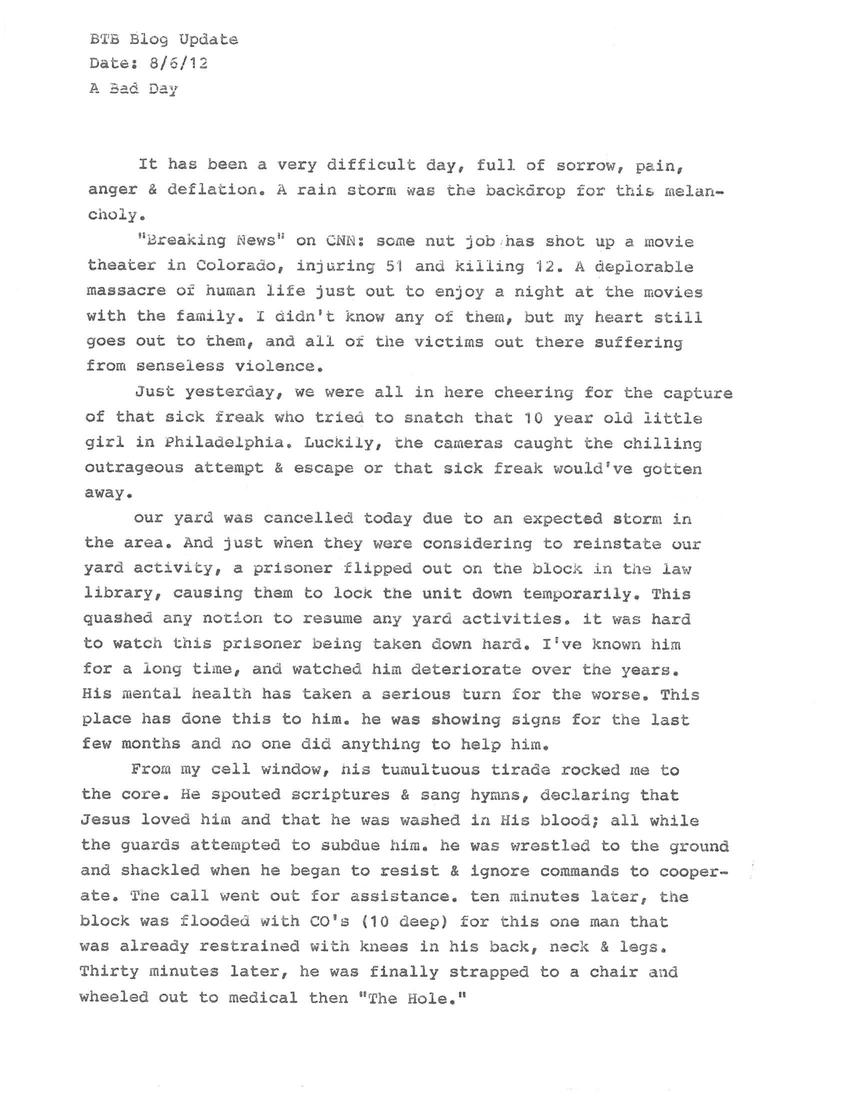 It has been a very difficult day, full of sorrow, pain, anger & deflation. A rain torm was the backdrop for this melancholy.

"Breaking News" on CNN: some nut job has shot up a movie theater in Colorado, injuring 51 and killing 12. A deplorable massacre of human life just out to enjoy a night at the movies with the family. I didn't know any of them, but my heart still goes out to them, and all of the victims out there suffering form senseless violence.

Just yesterday, we were all in here cheering for the capture of that sick freak who tried to snatch that 10 year old little girl in Philadelphia. Luckily, the cameras caught the chilling outrageous attempt & escape or that sick freak would've gotten away.

Our yard was cancelled today due to an expected storm in the area. And just when they wwre considering to reinstate our yard activity, a prisoner flipped out on the block in the law library, causing them to lock the unit down temporarily. This quashed any notion to resume any yard activities. It was hard to watch this prisoner being taken down hard. I've known him for a long time, and watched him deteriorated over the years. His mental health has taken a serious turn for the worse. This place has done this to him. He was showing signs for the last few months no one did anything to help him.

From my cell window, his tumultuous tirade rocked me to the core. He spouted scriptures & sang hymns, declaring that Jesus loved him and that he was washed in his blood; all while the guards attempted to subdue him. He was wrestled to the ground and shackled when he began to resist & ignore commands to cooperate. The call went out for asssitance. Ten minutes later, the block was flooded with Co's (10 deep) for this one man thatwas already restrained with knees in his back, neck & legs. Thirty minutes later, he was finally strapped to a chair and wheeled out to medical then "The Hole."

Thanks for writing! I finished the transcription for your post.
Your post is completely heartbreaking. As a Psychology (& criminology) student I am appauled at a system that can affect this outcome on an individual's mental health. I don't live in the U.S. but of course this scenario is no doubt playing out in prisons all over the world, every single day. I actually read an article on Facebook today linked from a prison advocacy group for women here in Australia. It was an article in the New York times today, a Psychiatrist speaking about the effects of over use of solitary confinement in the U.S.A. These were a couple of passages from that article that I thought related to your story & might interest you:

"...depriving people of freedom may be justifiable. But prolonged isolation inflicts another kind of harm, one that can never be justified. This harm is ontological; it violates the very structure of our relational being...For the sake of justice, not only for them but for ourselves, we must put an end to the over-use of solitary confinement in this country, and we must begin the difficult but mutually rewarding work of bringing the tens of thousands of currently isolated prisoners back into the world". They were quotes from Lisa Guenther. Associate Professor of philosophy at Vanderbilt University and the author of "Social Death and Its Afterlives: A Critical Phenomenology of Solitary Confinement."

This article began..."There are many ways to destroy a person, but the simplest and most devastating might be solitary confinement. Deprived of meaningful human contact, otherwise healthy prisoners often come unhinged. They experience intense anxiety, paranoia, depression, memory loss, hallucinations and other perceptual distortions. Psychiatrists call this cluster of symptoms SHU syndrome, named after the Security Housing Units of many supermax prisons."

This illness isn't confined to only people in solitary confinement of course, it can effect anyone overcome by the reality of living in confinement. It's a devistating reality and one I'm sure you're only too aware of. I sent you this information, not to upset you further, but to show you that there are scientific terms for the things you see, there are studies being carried out and there are people advocating for change. It hardly seems enough though does it.

I hope for you that tomorrow is a better day. Thank you for sharing your story.