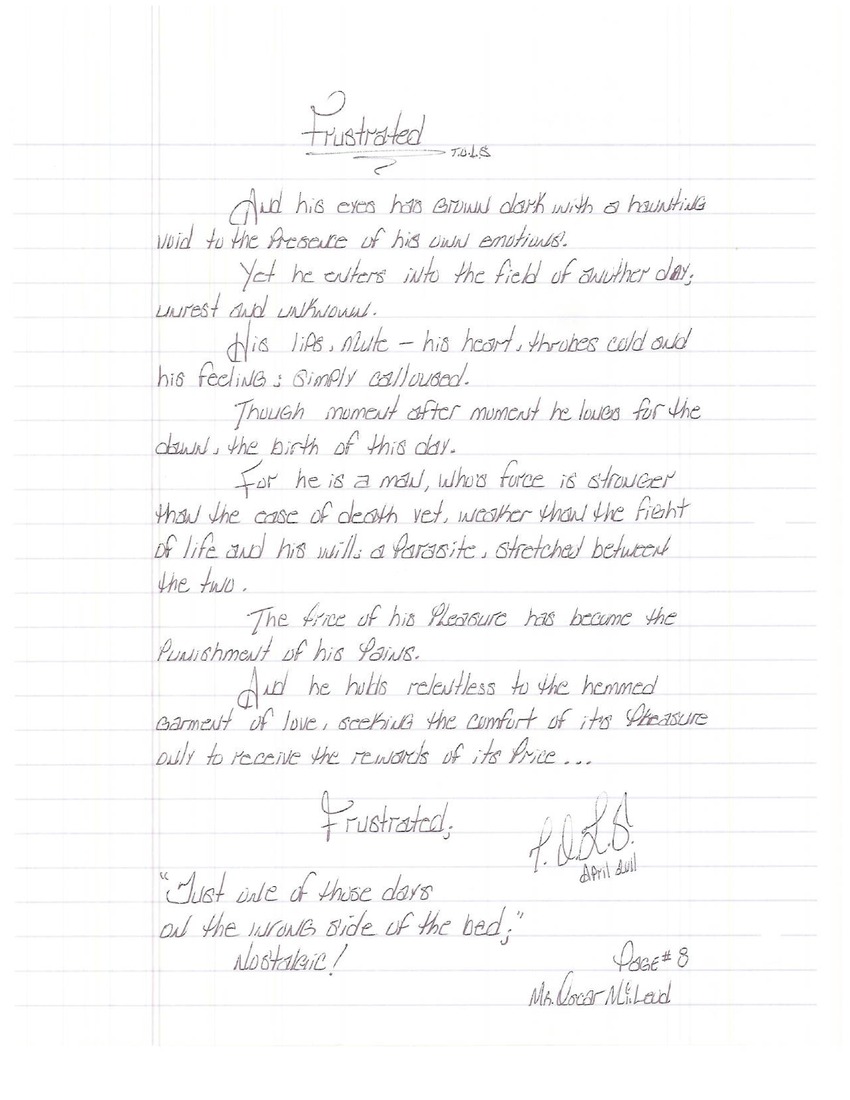 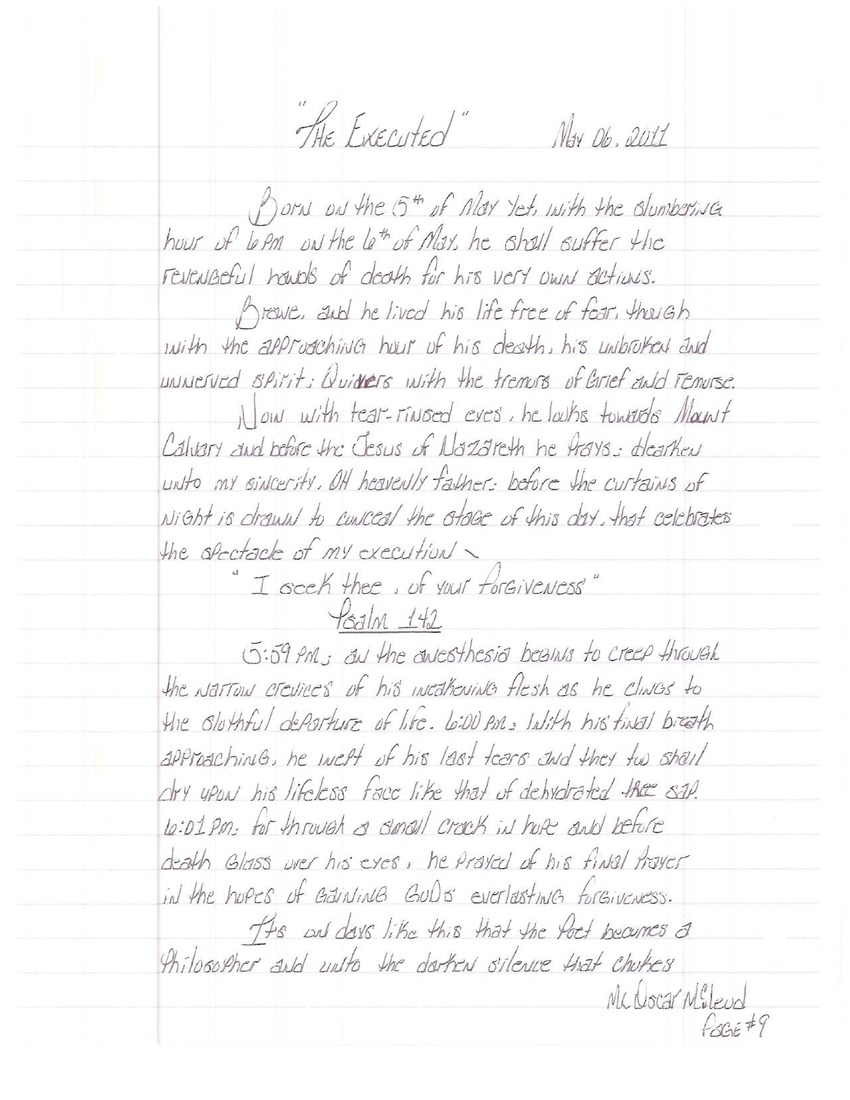 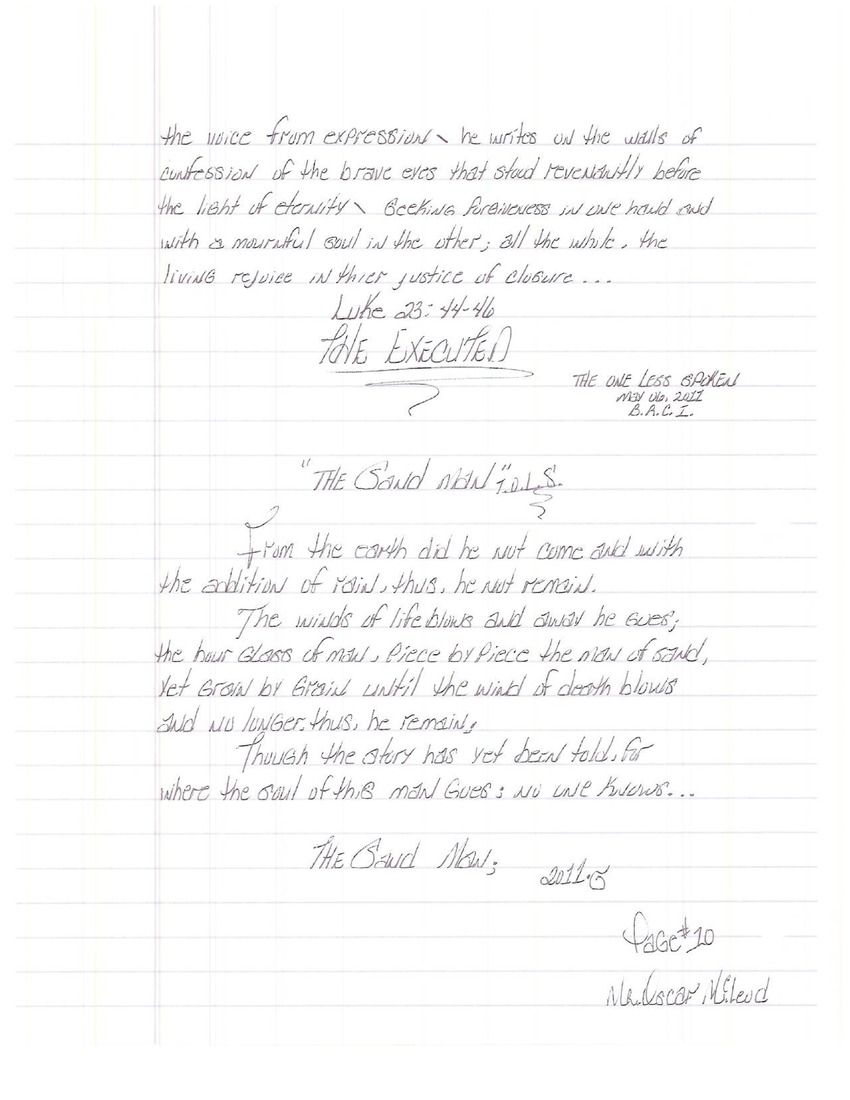 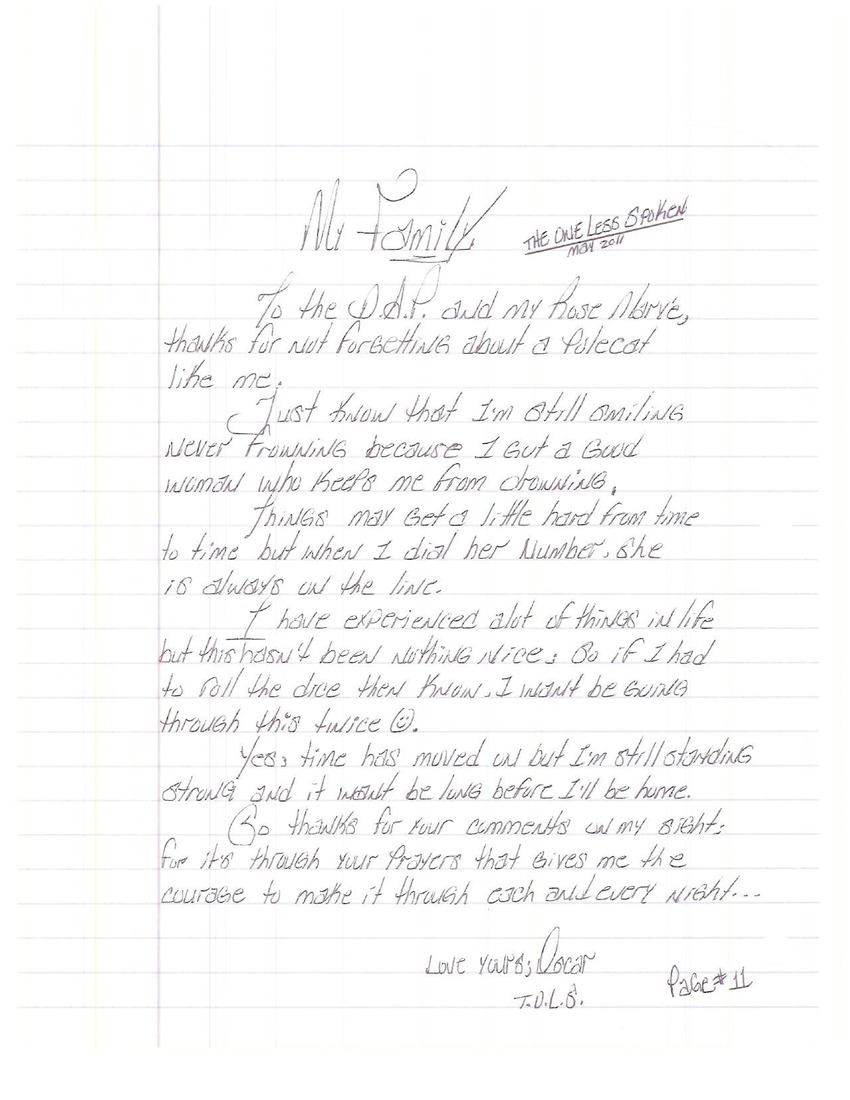 Frustrated
And his eyes have grown dark with a haunting
void to the pressure of his own emotions
Yet he enters into the field of another day
unrest and unknown
His lips, mute—his heart, throbs cold and
his feelings; simply calloused
Though moment after moment he loves for the
dawn, the birth of this day
For he is a man, whose force is stronger
than the case of death yet whether than the fight
of life and his will, a parasite, stretched between
the two.
The price of his pleasure has become the
punishment of his pains
And he holds relentless to the hemmed
garment of love, seeking the comfort of its pleasure
only to receive the rewards of its price...

Frustrated
"Just one of those days on the wrong side of the bed. Nostalgic!"
Mr. Oscar McLeod

The Executed
Born on the fifth of May yet, with the slumbering hour of 6 AM on the sixth of May, he shall suffer the revengeful hands of death for his very own actions.

Brave, and he lived his life free of fear, though with the approaching hour of his death, his unbroken and unnerved spirit, quivers with the tremors of grief and remorse.

Now with tear-rinsed eyes, he looks toward Mount Calvary and before the Jesus of Nazareth he prays. Hearken unto my sincerity. Oh heavenly father, before the curtains of night is drawn to conceal the stage of the day, that celebrates the spectacle of my execution, I seek thee of your forgiveness. (Psalm 142)

5:59 PM, as the anesthesia begins to creep through the narrow crevices of his weakening flesh as he clings to the slothful departure of life. 6:00 PM, with his final breath approaching, he wept his last tears and they too shall dry upon his lifeless face like that of dehydrated tree sap. 6:01 PM, for though a small crack in hope and before death glasses over his eyes, he prayed of his final prayer in the hopes of gaining God's everlasting forgiveness.

It's on days like this that the poet becomes a philosopher and unto the darkened silence that chokes.

The voice from expression
he writes on the walls of confession of the brave eyes that stood reverently before the light of eternity
seeking forgiveness in one hand and with a mournful soul in the other; all the while, the living rejoice in their justice of closure...

The Sand Man
From the earth did he not come and with the addition of rain, thus he not remain.
The winds of life blows and away he sues, the hourglass of man, piece by piece the man of sand, yet grain by grain until the wind of death blows and no longer, thus he remain.
Though the story has yet been told for where the soul of this man goes, no one knows.

My family
To the P.A.P. and my Rose Marve, thanks for not forgetting about a polecat like me.

Just know that I'm still smiling, never frowning because I got a good woman who keeps me from drowning.

Things may get a little hard from time to time but when I dial her number, she is always on the line.

I have experienced a lot of things in life, but this hasn't been nothing nice. So if I had to roll the dice then know, I want to be going through this twice. :)

Yes, time has moved on but I'm still standing strong, and it won't be long before I'll be home.

So thanks for your comments on my site for it's through your prayers that gives me the courage to make it through each and every night.

i step into the room and feel the temporary joy and when you step out from behind the door i see the biggest temporary smile and then we talk and we laugh and for a second we feel like a family but we all no this feeling is only temporary as we hug you and tell u goodbye i feel and i see the pain in your eyes. i fight my tears back cuz dad always said dont cry dont hold your head up high and i say to myself not many more times will he have to leave me because this life for my dad is only temporary