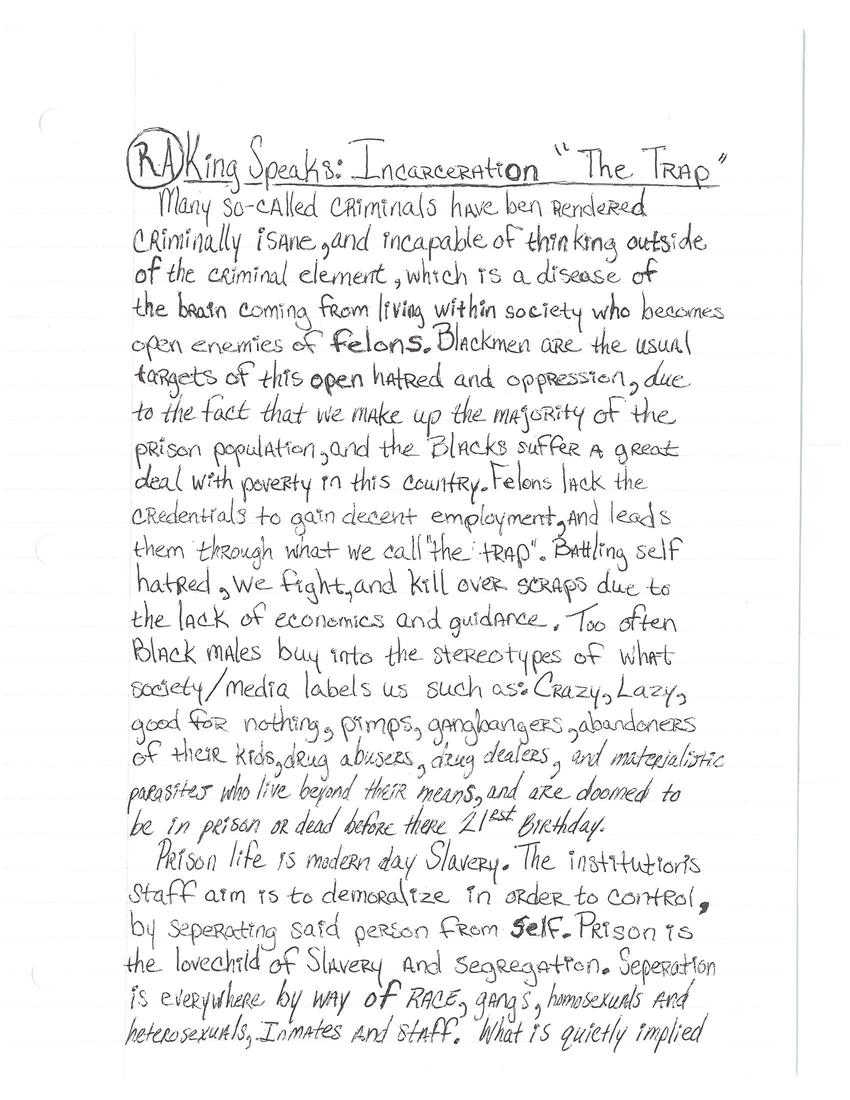 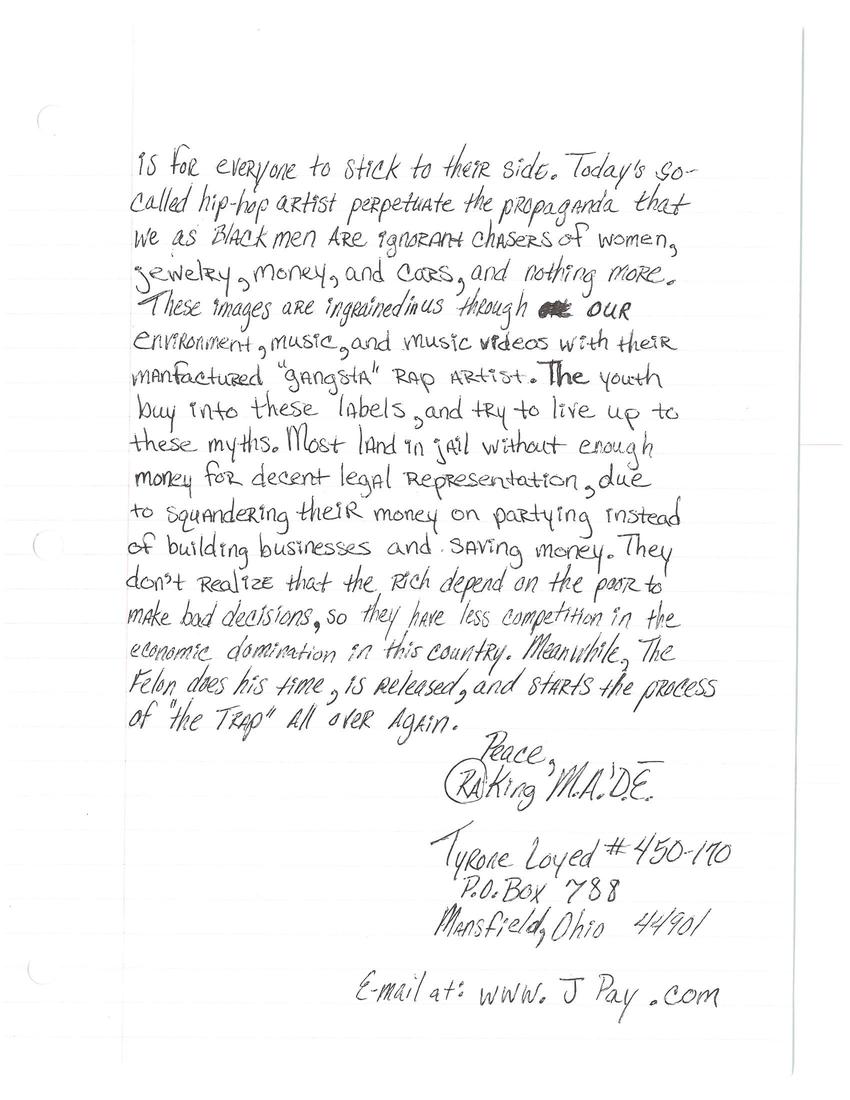 Many so-called criminals have been rendered criminally insane, and incapable of thinking outside of the criminal element, which is a disease of the brain coming from living within a society which becomes the open enemy of felons. Black men are the usual targets of this open hatred and oppression, due to the fact that we make up the majority of the prison population, and the blacks suffer a great deal with poverty in this country. Felons lack the credentials to gain decent employment, and this leads them through what we call "the trap". Battling self hatred, we fight and kill over scraps due to the lack of economics and guidance. Too often black males buy into the stereotypes of what society/media labels us, such as crazy, lazy, good-for-nothing, pimps, gang-bangers, abandoners of their kids, drug abusers, drug dealers and materialistic parasites who live beyond their means, and are doomed to be in prison or dead before their 21st birthday.

Prison life is modern-day slavery. The institution staff's aim is to demoralize in order to control, by separating said person from self. Prison is the lovechild of slavery and segregation. Separation is everywhere by way of race, gangs, homosexuals and heterosexuals, inmates and staff. What is quietly implied if for everyone to stick to their side. Today's so-called hip-hop artists perpetuate the propaganda that we as black men are ignorant chasers of women, jewellery, money and cars, and nothing more. These images are ingrained in us through our environment, music and music videos with their manufactured "gangsta" rap artists. The youth buy into these labels, and try to live up to these myths. Most land in jail without enough money for decent legal representation, due to squandering their money on partying instead of building businesses and saving money. They don't realise that the rich depend on the poor to make bad decisions, so they have less competition in the economic domination of this country. Meanwhile, the felon does his time, is released, and starts the process of "the trap" all over again.

Hi Tyrone, thanks for writing. I have transcribed this and your essay on religion. It seems that you have some really valuable views to share, and have your head screwed on very well given your situation, which must be difficult. I agree with both your posts. 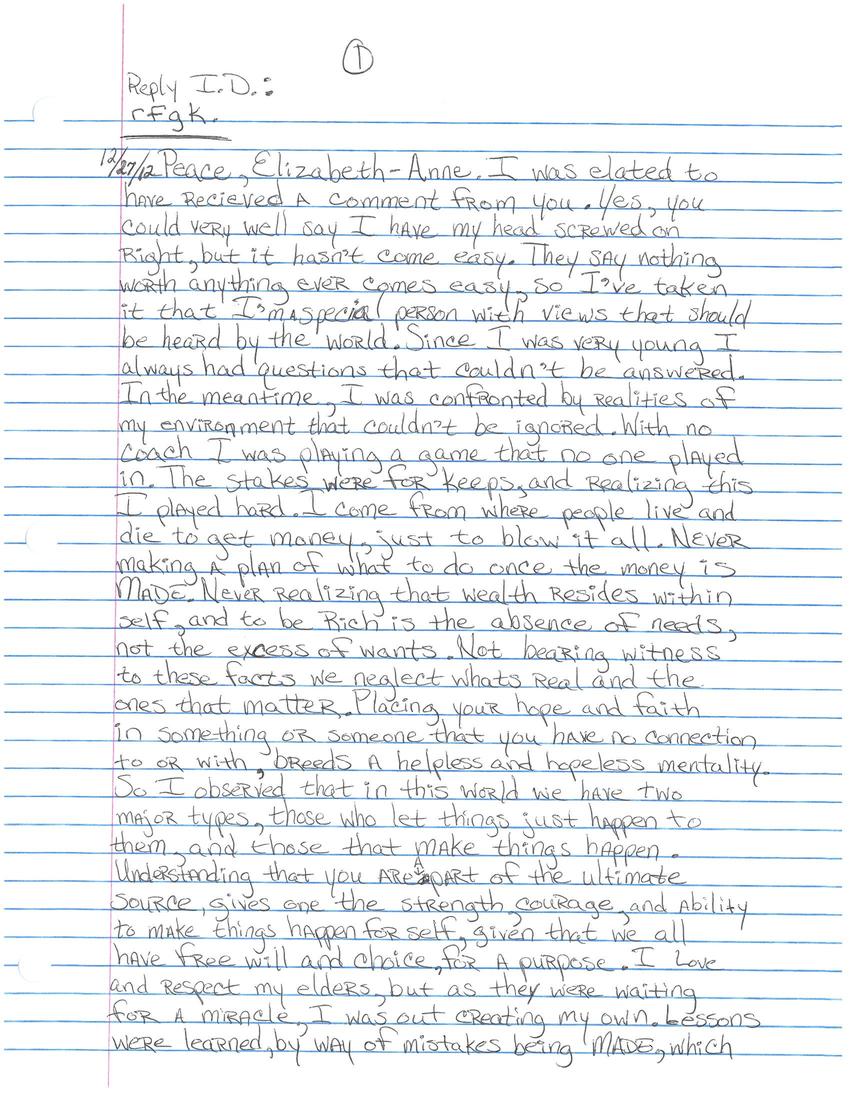 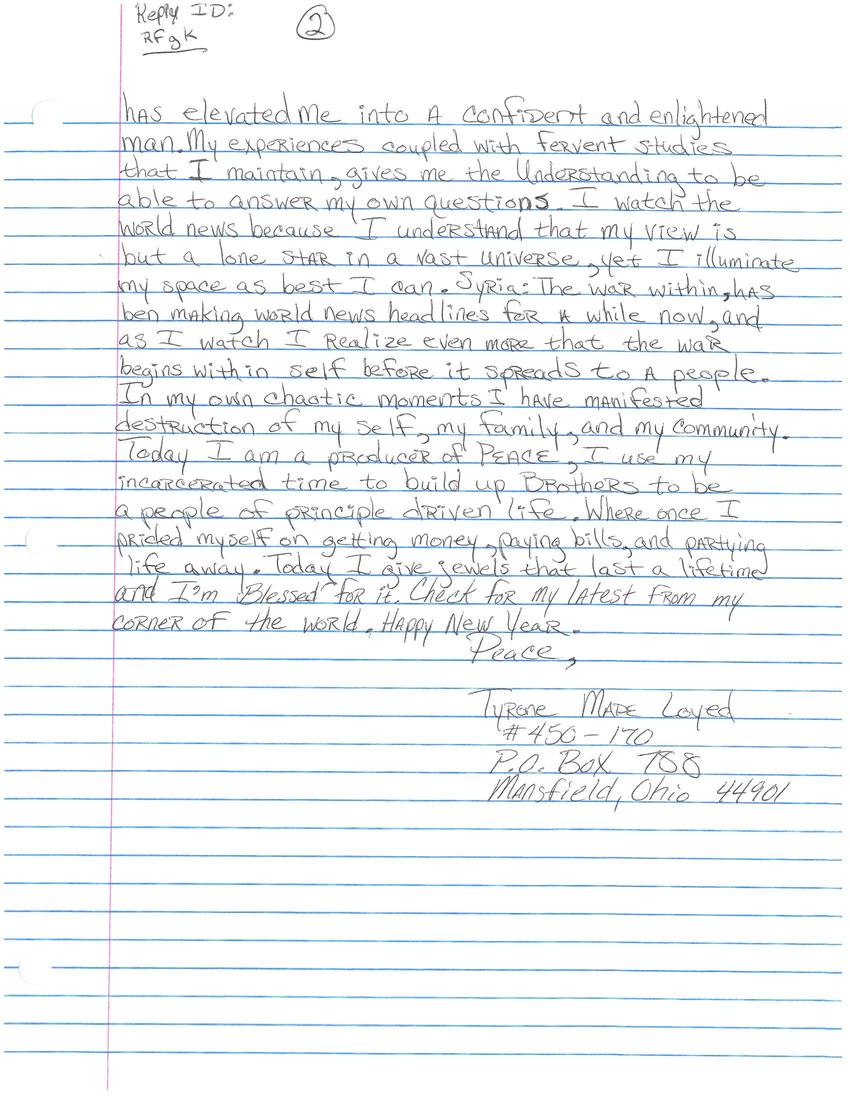 Sorry for taking a couple of weeks to reply to you - I have been very busy, which makes me feel guilty as the people I owe replies to don't have the opportunity to be busy!

I think you have a real skill for writing - do you just write your thoughts or have you written creatively?

I know it can be so hard to have to find your own way in life and teach yourself. It's even harder if you have fewer opportunities. Anyone that can still manage it under tough circumstances is to be admired. 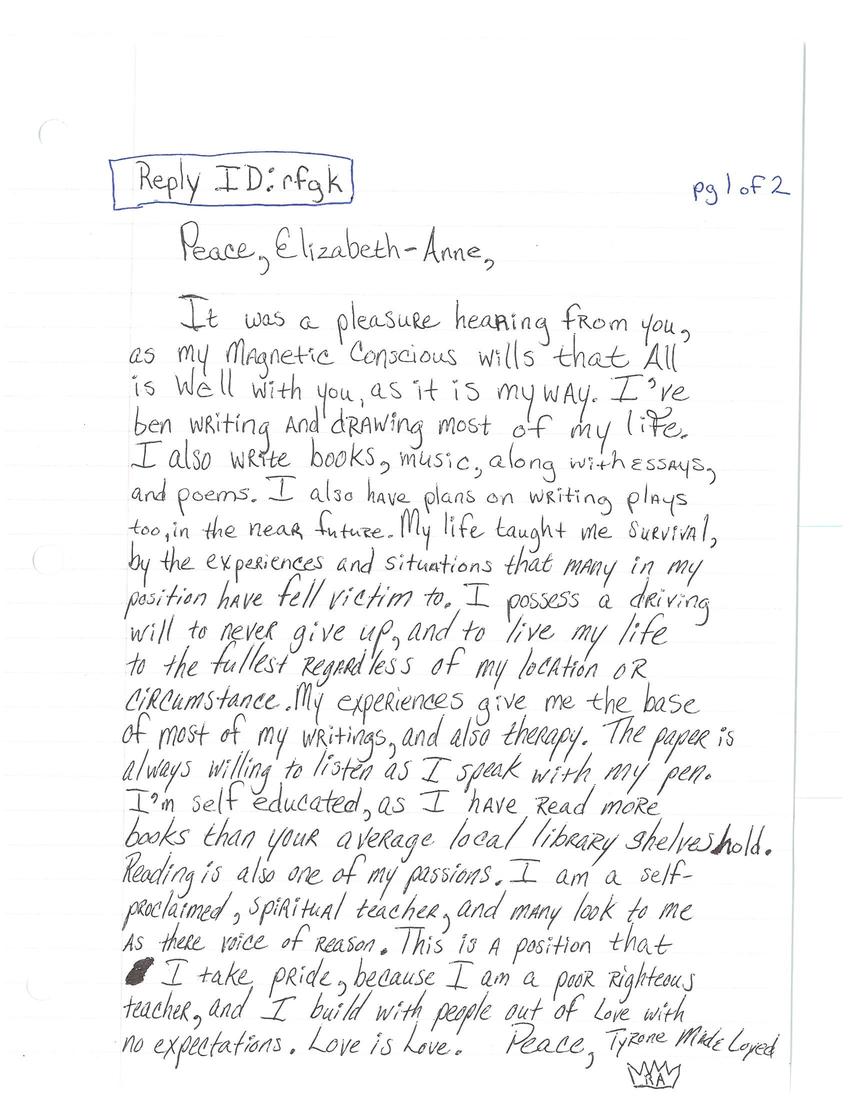 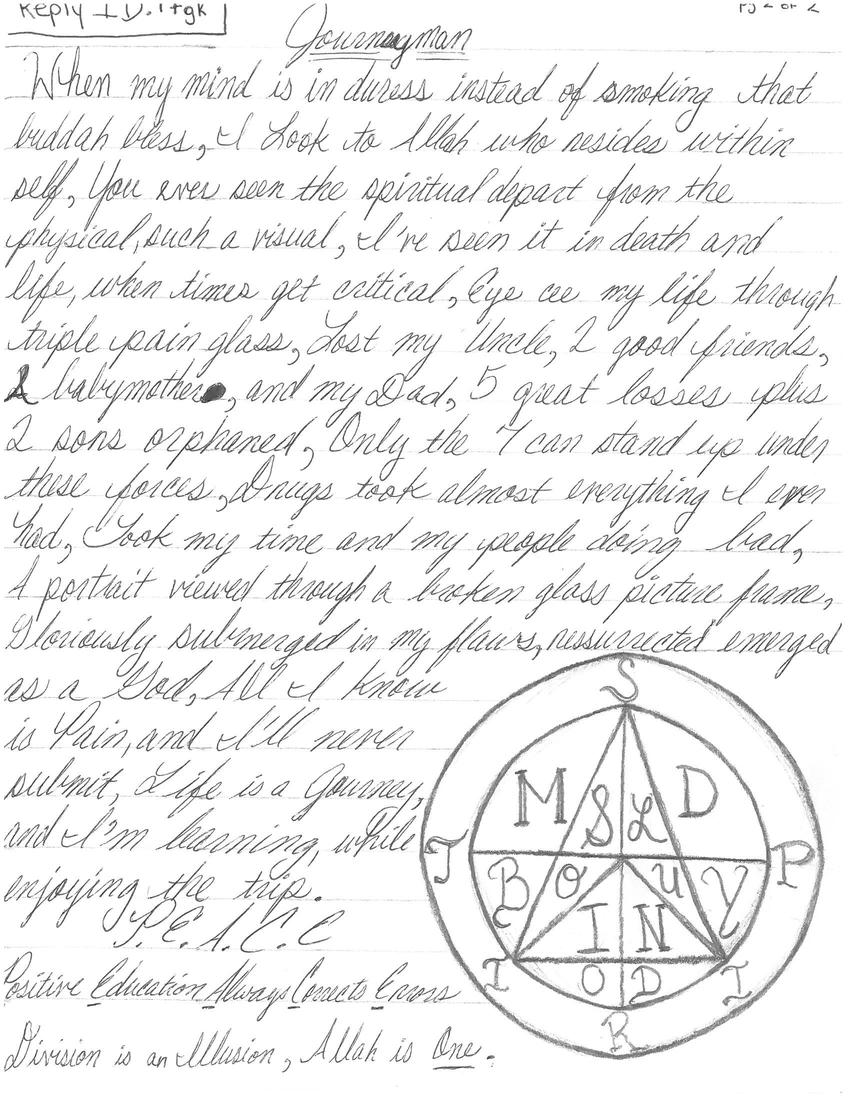