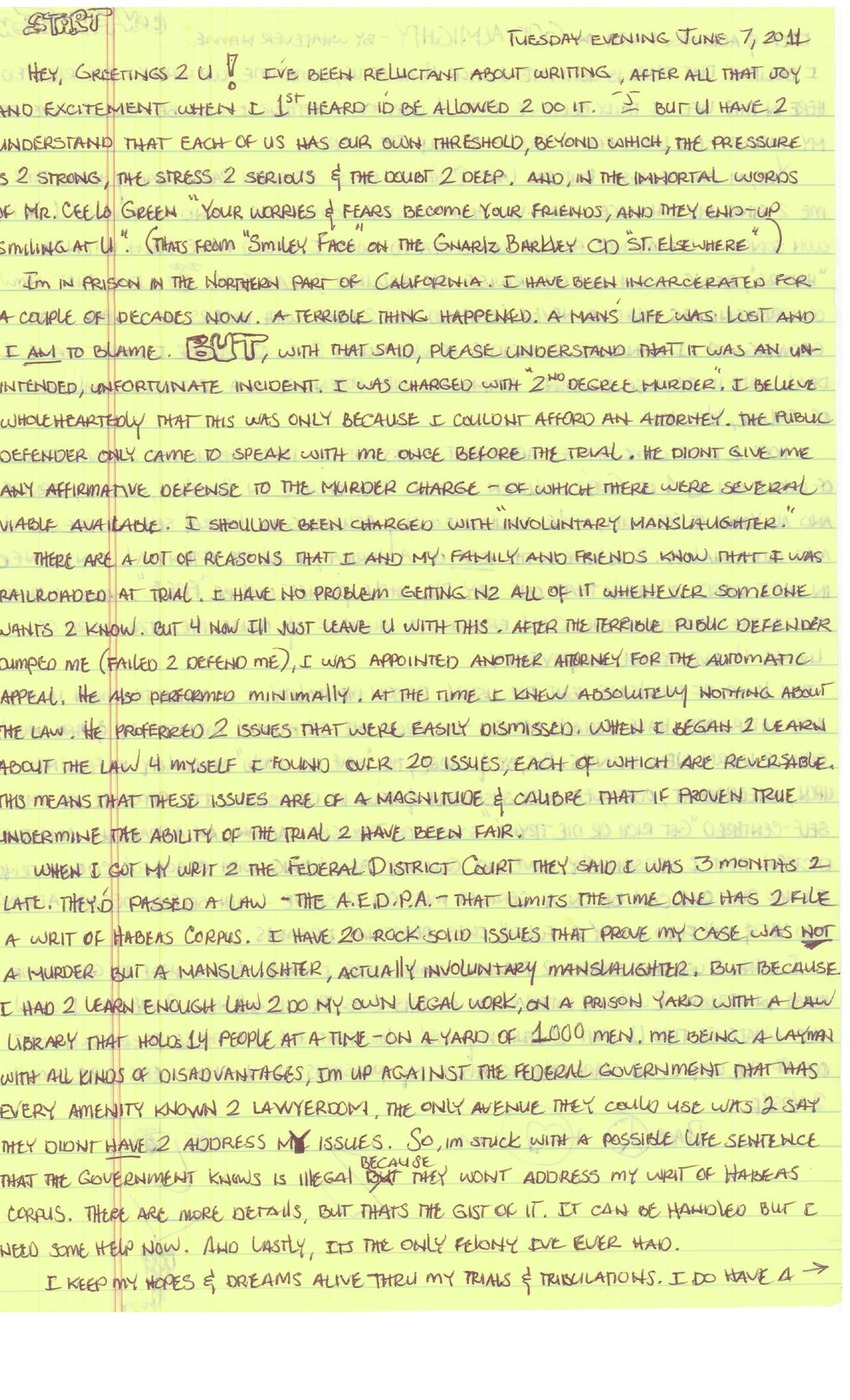 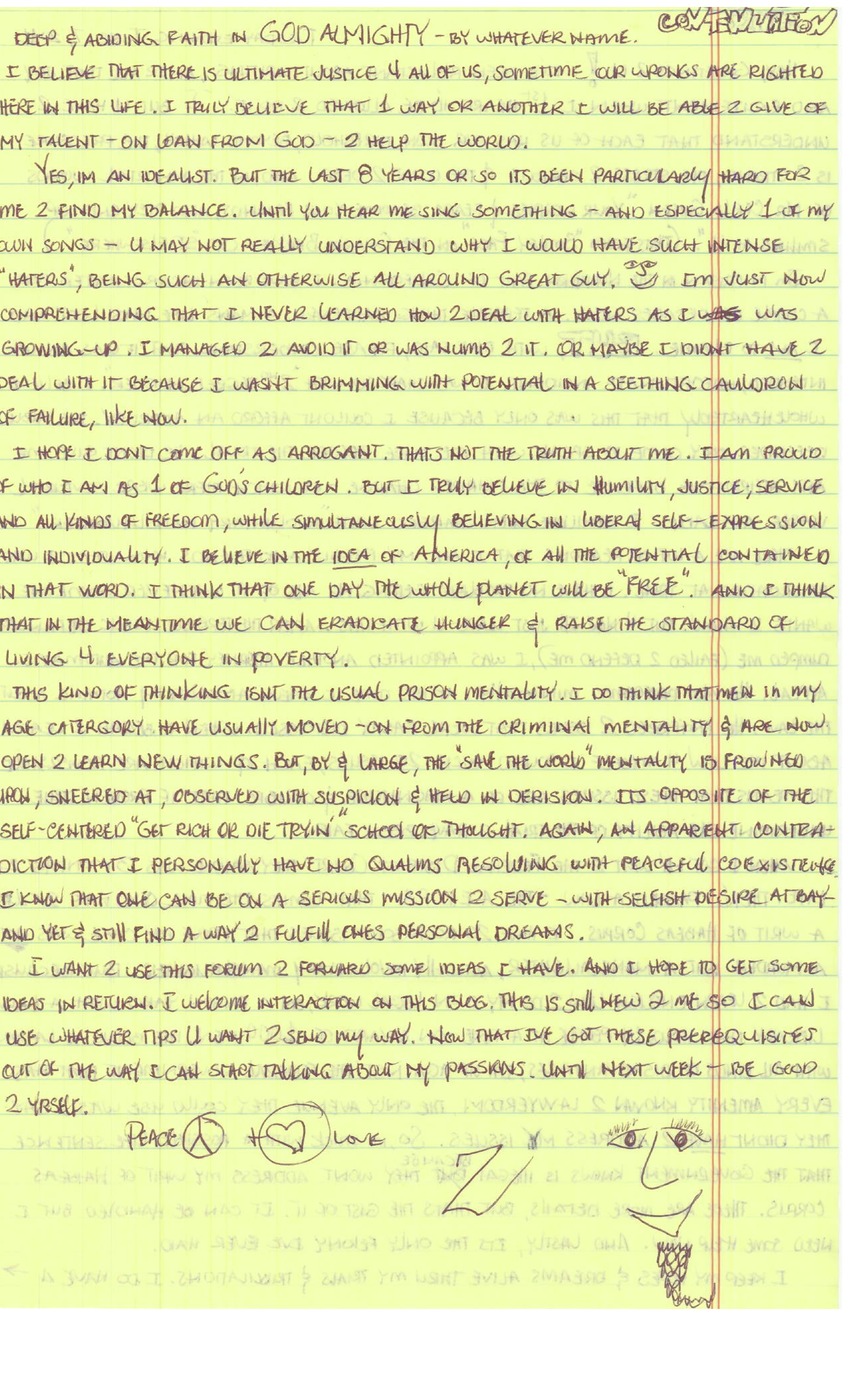 Hey, greetings to you! I've been reluctant about writing after all that joy and excitement when I first heard I'd be allowed to do it. :| But you have to understand that each of us has our own threshold beyond which the pressure is too strong, the stress too serious, and the doubt too deep. And in the immortal words of Mr. Ceelo Green: "Your worries and fears become your friends, and they end up smiling at you>" That's from "Smiley Face" on the Gnarlz Barkely CD St. Elsewhere.

I'm in prison in the northern part of California. I have been incarcerated for a couple of decades now. A terrible thing happened. A man's life was lost and I am to blame. BUT with that said, please understand that it was an unintended, unfortunate incident. I was charged with second degree murder. I believe wholeheartedly that this was only because I couldn't afford an attorney. The public defender only came to speak with me once before the trial. He didn't give me any affirmative defense to the murder charge—of which there were several viable available. I should've been charged with involuntary manslaughter.

There are a lot of reasons that my family and I and friends know that I was railroaded at the trial. I have no problem getting into all of it whenever someone wants to know. But for now I'll just leave you with this. After the terrible public defender dumped me (failed to defend me), I was appointed another attorney for the automatic appeal. He also performed minimally. At the time I knew absolutely nothing about the law. He preferred two issues that were easily dismissed. When I began to learn about the law for myself, I found over 20 issues, each of which are reversible. This means that these issues are of a magnitude and caliber that, if proven true, undermine the ability of the trial to have been fair.

When I got my write to the federal district court they said I was three months too late. They'd passed a law—the AEDPA—that limits the time one has to file a writ of habeas corpus. I have 20 rock solid issues that prove my case was not murder but manslaughter. Actually involuntary manslaughter. But because I had to learn enough law to do my own legal work, on a prison yard with a law library that holds 14 people at a time, on a yard of 1,000 men. Me, being a layman, with all kinds of disadvantages, I'm up against the federal government that was every amenity known to lawyerdom. The only avenue they could use was to say they didn't have to address my issues.

So I'm stuck with a possible life sentence that the government knows is illegal because they won't address my writ of habeas corpus. There are more details, but that's the gist of it. It can be handled but I need some help now. And lastly, it's the only felony I've ever had.

I keep my hopes and dreams alive through my trials and tribulations. I do have a deep and abiding faith in God almighty—by whatever name. I believe that there is ultimate justice for all of us, sometimes our wrongs are righted here in this life. I truly believe that one way or another I will be able to give my talent—on loan from God—to help the world.

Yes, I'm an idealist. But the last eight years or so it's been particularly hard for me to find my balance. Until you hear me sing something—and especially one of my own songs—you may not really understand why I would have such intense haters, being such an otherwise all around great guy. :D I'm just now comprehending that I never learned how to deal with haters as I was growing up. I managed to avoid it or was numb to it. Or maybe I didn't have to deal with it because I wasn't brimming with potential in a seething cauldron of failure—like now.

I hope I don't come off as arrogant. That's not the truth about me. I am proud of who I am, as one of God's children. But I truly believe in humility, justice, service, and all kinds of freedom—while simultaneously believing in liberal self-expression and individuality. I believe in the idea of America, of all the potential contained in that word. I think that one day the whole planet will be free. And I think that in the meantime we can eradicate hunger and raise the standard of living for everybody in poverty.

This kind of thinking isn't the usual prison mentality. I do think that men in my age category have usually moved on from the criminal mentality and are now open to learn new things. But by and large, the "save the world" mentality is frowned upon, sneered at, obsessed with suspicion, and held in derision. It's opposite of the self-centered get rich or die trying school of thought. Again, an apparent contradiction that I personally have no qualms resolving with peaceful coexistence. I know that one can be on a serious mission to serve—with selfish desire at bay and yet still find a way to fulfill one's personal dreams.

I want to use this forum to forward some ideas I have. And I hope to get some ideas in return. I welcome interaction on this blog. This is still new to me so I can use whatever tips you want to send my way. Now that I've got these prerequisites out of the way, I can start talking about my passions. Until next week, be good to yourself.

Have no legal ability myself. But wanted to send you thanks and hope from outside....