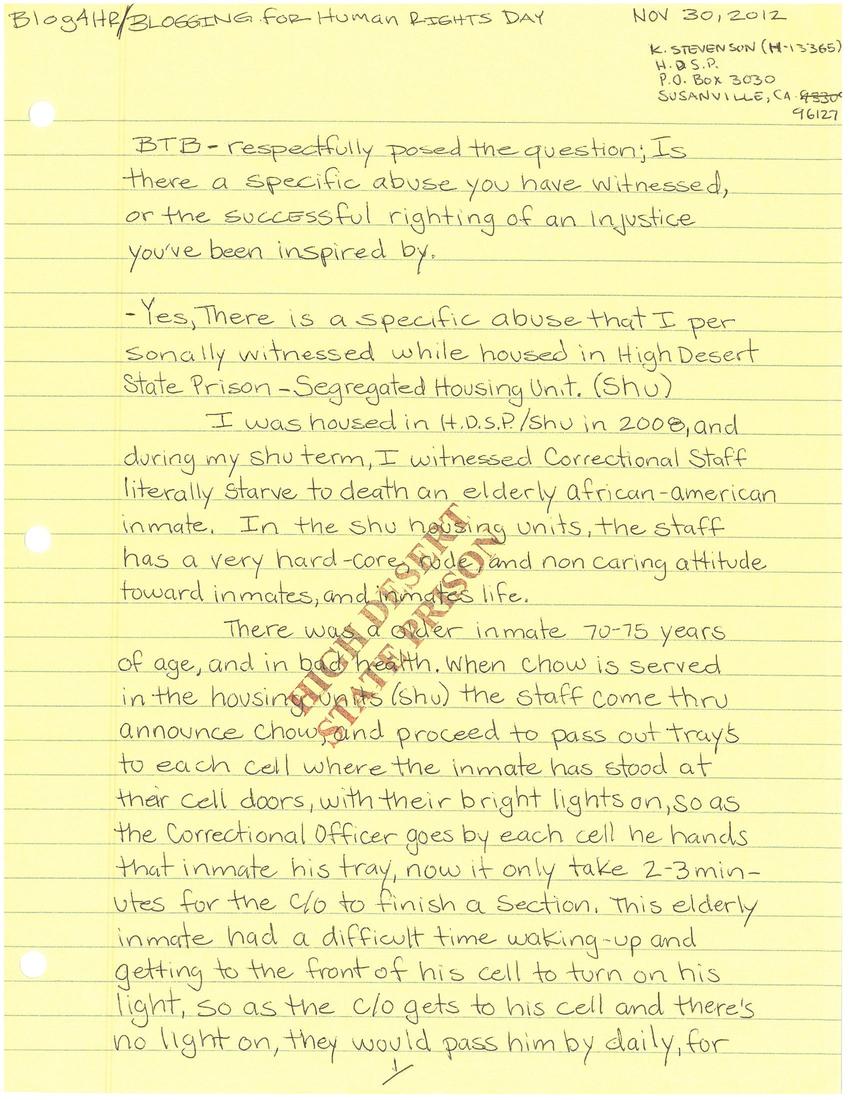 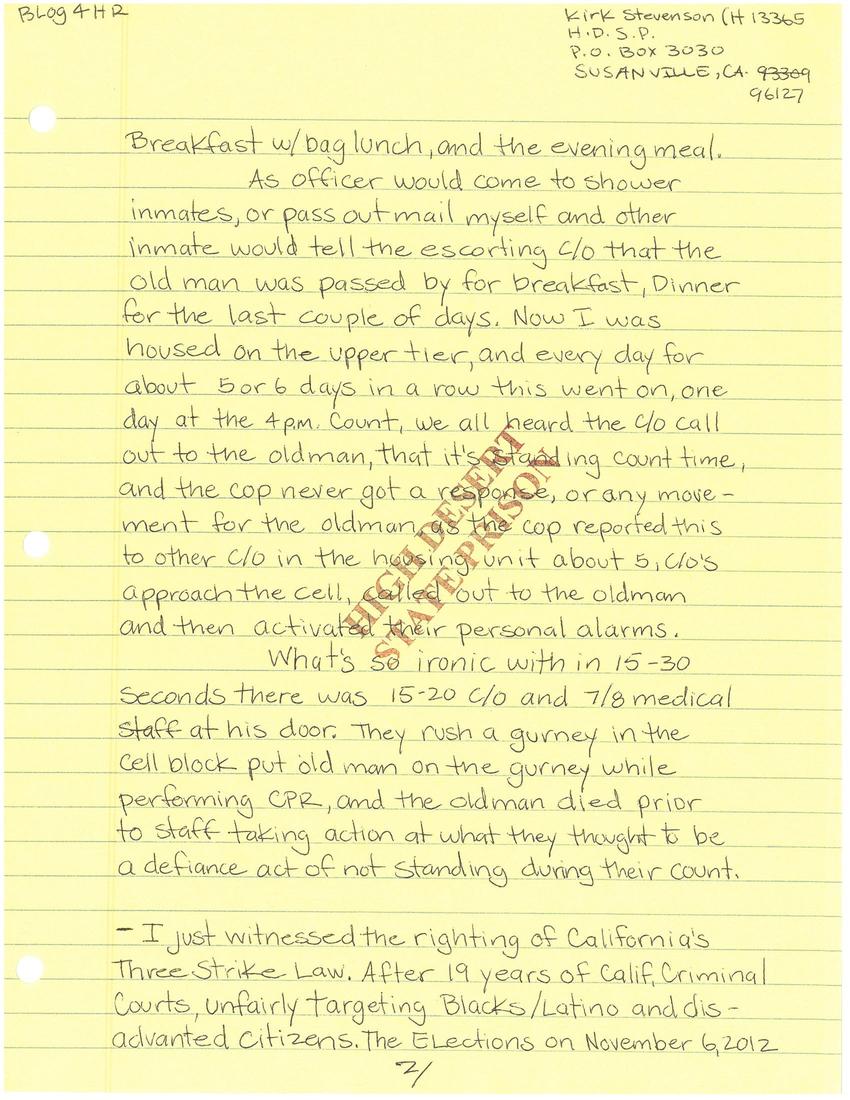 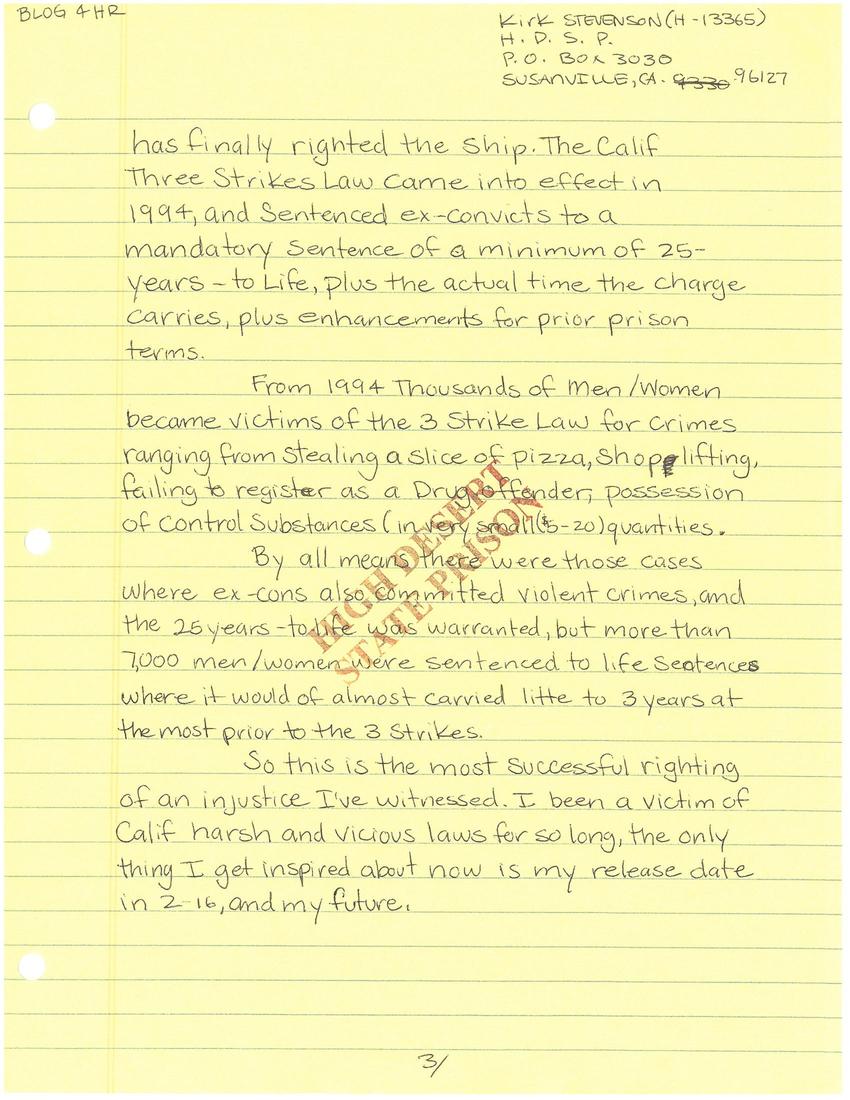 BTB - respectfully posed the question: Is there a specific abuse you have witnessed, or the successful righting of an injustice you've been inspired by.

- Yes, there is a specific abuse that I personally witnessed while housed in High Desert State Prison - Segregated Housing Unit (SHU).

I was housed in H.D.S.P./SHU in 2008, and during my SHU term, I witnessed correctional staff literally starve to death an elderly African-American inmate. In the SHU housing units, the staff has a very hard-core, rude, and non-caring attitude towards inmates, and inmates' life.

There was an older inmate, 70-75 years of age, and in bad health. When chow is served in the housing units (SHU), the staff come thru, announce chow, and proceed to pass out trays to each cell where the inmate has stood at their cell doors, with their bright lights on, so as the correctional officer goes by each cell he hands that inmate his tray, now it only takes 2-3 minutes for the C/O to finish a section. This elderly inmate had a difficult time waking up and getting to the front of his cell to turn on his light, so as the C/O gets to his cell and there's no light on, they would pass him by daily, for breakfast w/bag lunch, and the evening meal.

As officer would come to shower inmates, or pass out mail, myself and other inmates would tell the escorting C/O that the old man was passed by for breakfast, dinner for the last couple of days. Now I was housed on the upper tier, and every day for about 5 or 6 days in a row this went on, one day at the 4pm count, we all heard the C/O call out to the old man, that it's standing count time, and the cop never got a response, or any movement for the old man, as the cop reported this to other C/O in the housing unit about 5 C/Os approach the cell, called out to the old man and then activated their personal alarms.

What's so ironic within 15-30 seconds there was 15-20 C/O and 7/8 medical staff at his door. They rush a gurney in the cell block, put old man on the gurney while performing CPR, and the old man died prior to staff taking action at what they thought to be a defiance act of not standing during their count.

- I just witnessed the righting of California's three strike law. After 19 years of Calif. Criminal Courts, unfairly targeting Blacks/Latino and disadvantaged citizens, the elections on November 6, 2012 has finally righted the ship. The Calif Three Strikes Law came into effect in 1994, and sentenced ex-convicts to a mandatory sentence of a minimum of 25-years-to-life, plus the actual time the charge carries, plus enhancements for prior prison terms.

From 1994 thousands of men/women became victims of the 3 Strike Law for crimes ranging from stealing a slice of pizza, shoplifting, failing to register as a drug offender, possession of controlled substances (in very small ($5-20) quantities).

By all means there were those cases where ex-cons also committed violent crimes, and the 25 years-to-life was warranted, but more than 7,000 men/women were sentenced to life sentences where it would have almost carried little to 3 years at the most prior to the 3 strikes.

So this is the most successful righting of an injustice I've witnessed. I been a victim of Calif harsh and vicious laws for so long, the only thing I get inspired about now is my release date in 2-16, and my future.

Wow your story about the elderly inmate is chilling. That's the kind of thing you don't forget! I'm sorry you had to witness that.
(scanned reply – view as blog post)
uploaded March 3, 2013.  Original (PDF) 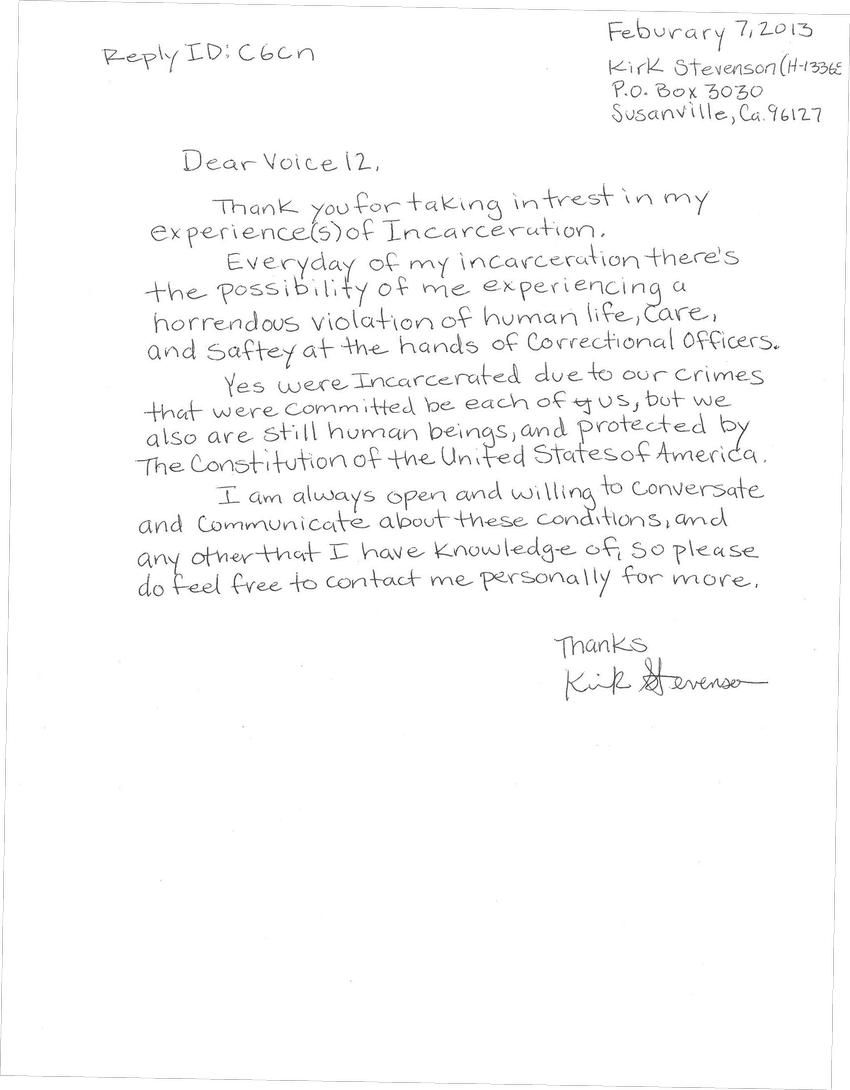