I Met An Angel 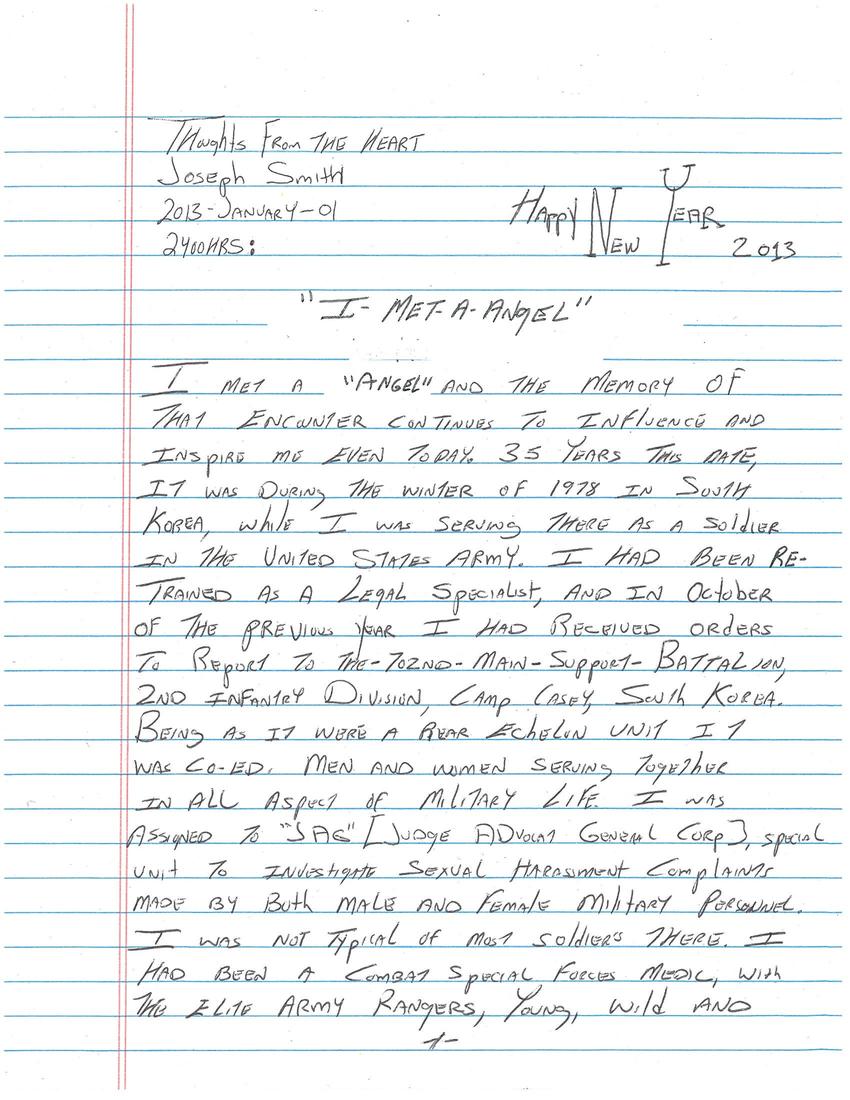 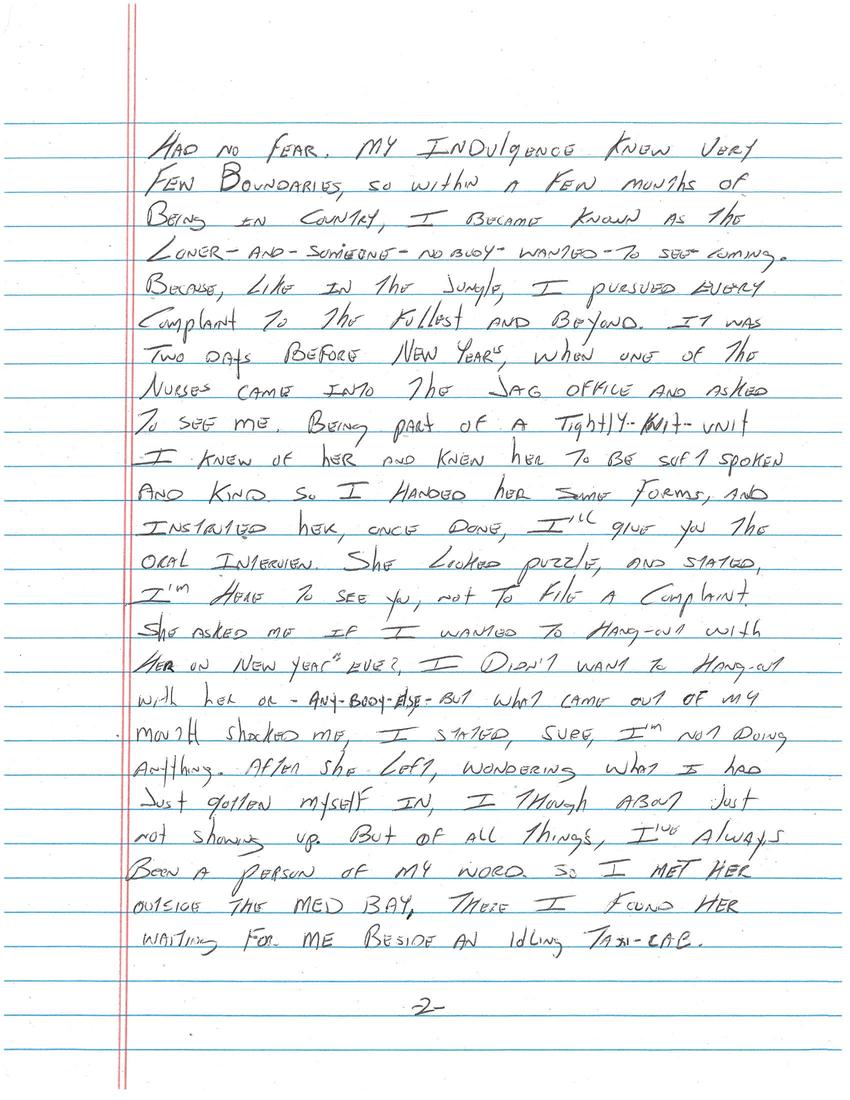 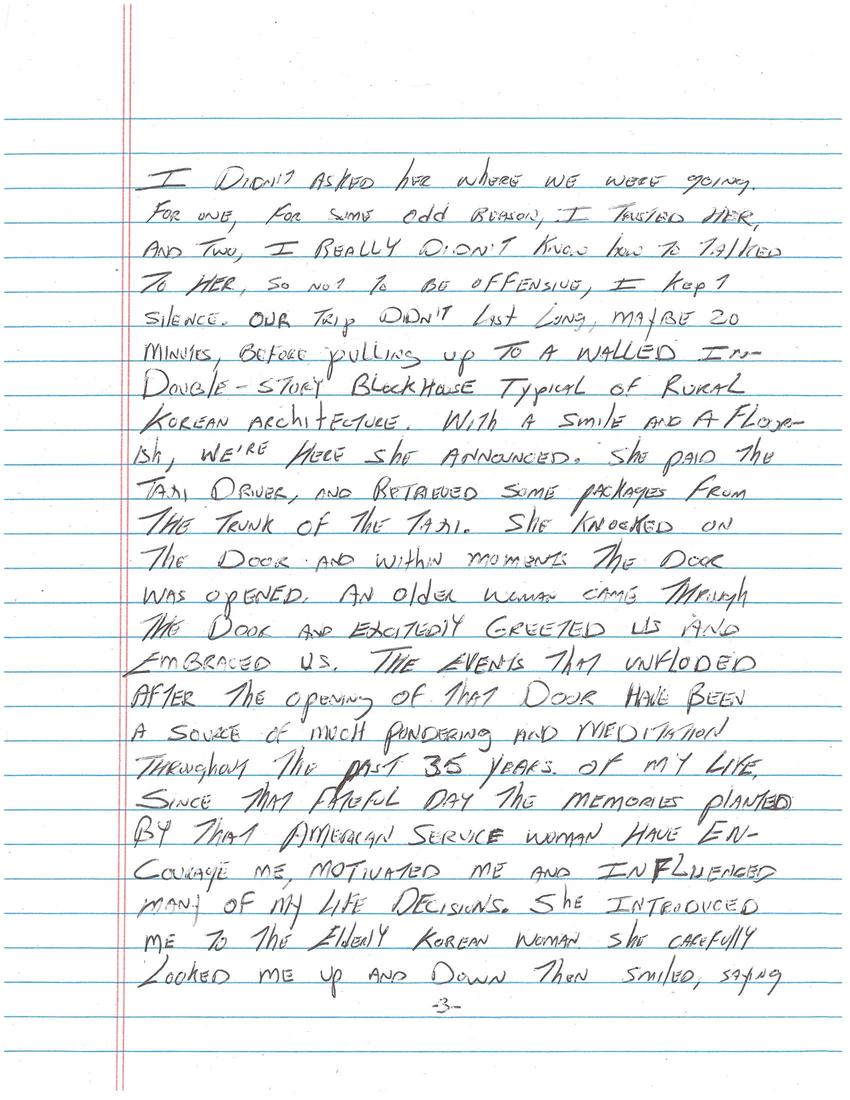 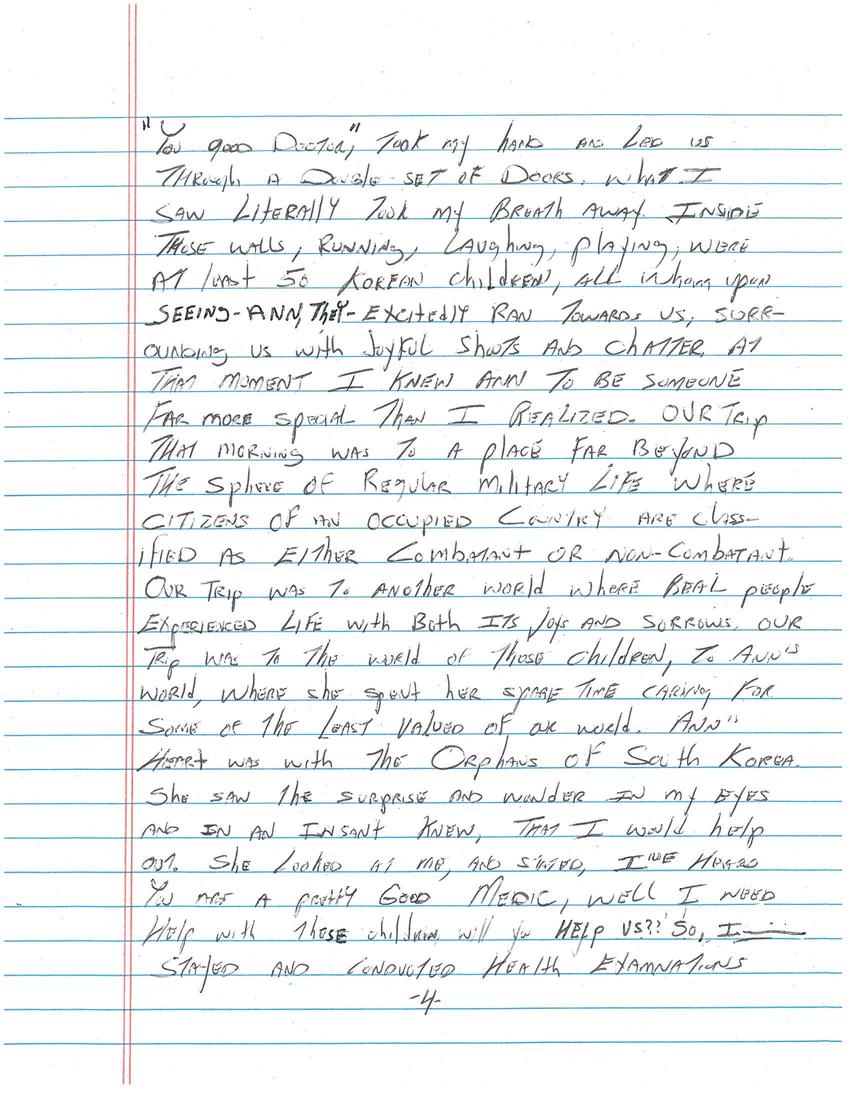 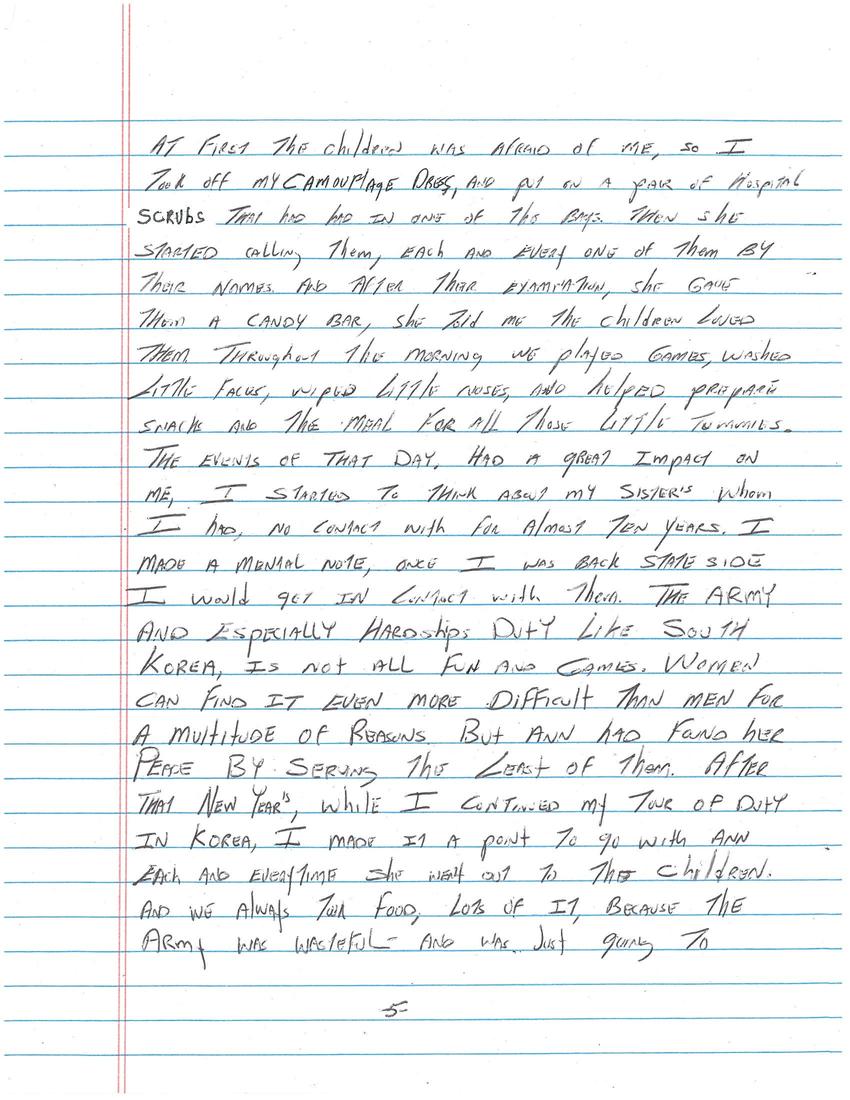 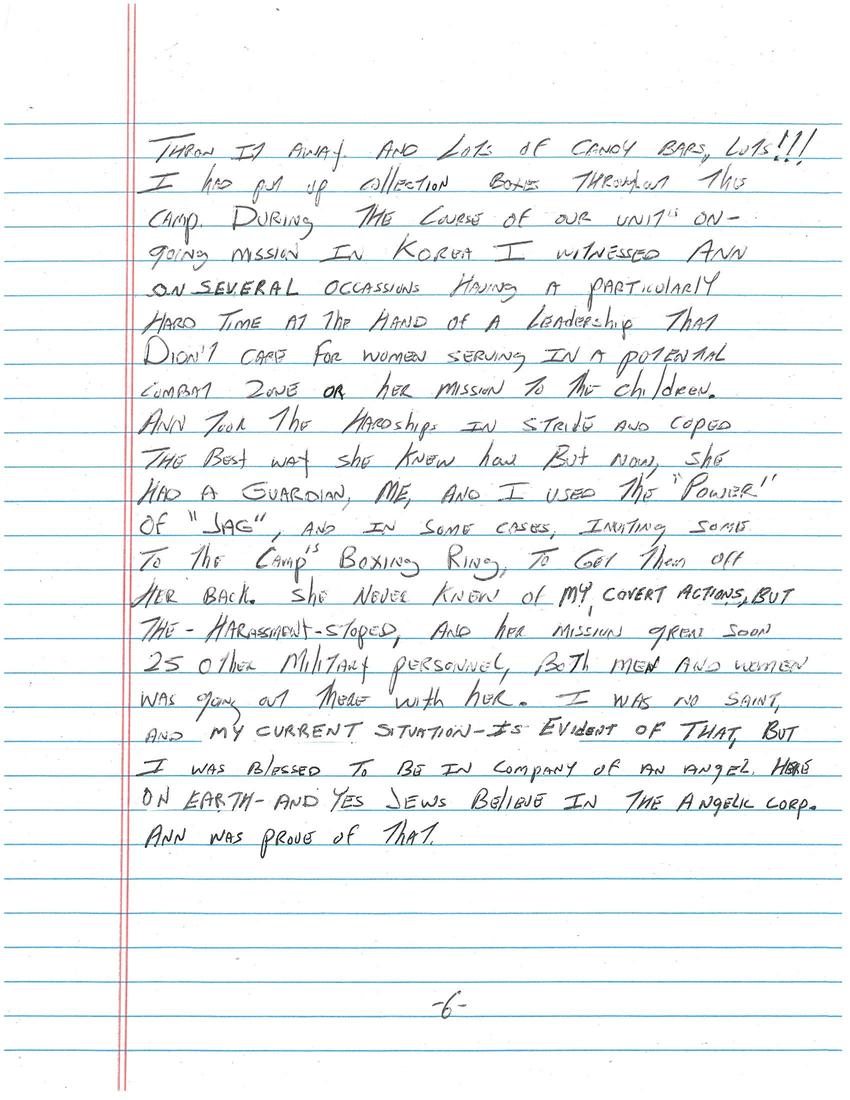 I met an "angel" and the memory of that encounter continues to influence and inspire me even today. 35 years this date, it was during the winter of 1978 in South Korea, while I was serving there as a soldier in the United States Army. I had been re-trained as a legal specialist, and in October of the previous year I had received orders to report to the 702nd Main Support Battalion, 2nd Infantry Division, Camp Casey, South Korea. Being as it were a rear echelon unit, it was co-ed, men and women serving together in all aspects of military life. I was assigned to "JAG" [Judge Advocate General Corp], special unit to investigate sexual harassment complaints made by both male and female military personnel. I was not typical of most soldiers there. I had been a combat special forces medic, with the elite Army Rangers, young, wild and had no fear. My indulgence knew very few boundaries, so within a few months of being in country, I became known as the loner and someone nobody wanted to see coming. Because, like in the jungle, I pursued every complaint to the fullest and beyond. It was two days before New Year's, when one of the nurses came into the JAG office and asked to see me. Being part of a tightly knit unit, I knew of her and knew her to be soft spoken and kind, so I handed her some forms, and instructed her, once done, I'll give you the oral interview. She looked puzzled, and stated, "I'm here to see you, not to file a complaint". She asked me if I wanted to hang out with her on New Year's Eve? I didn't want to hang out with her or anybody else - but what came out of my mouth shocked me, I stated, "Sure, I'm not doing anything". After she left, wondering what I had just gotten myself in, I thought about just not showing up. But of all things, I've always been a person of my word. So I met her outside the med bay, there I found her waiting for me beside an idling taxi-cab.

I didn't ask her where we were going. For one, for some odd reason, I trusted her, and two, I really didn't know how to talk to her, so not to be offensive, I kept silence. Our trip didn't last long, maybe 20 minutes, before pulling up to a walled-in double-storey block house typical of rural Korean architecture . With a smile and a flourish, "We're here", she announced. She paid the taxi driver, and retrieved some packages from the trunk of the taxi. She knocked on the door and within moments the door was opened. An older woman came through the door and excitedly greeted us and embraced us. The events that unfolded after the opening of that door have been a source of much pondering and meditation throughout the past 35 years of my life, since that fateful day the memories planted by that American servicewoman have encouraged me, motivated me and influenced many of my life decisions. She introduced me to the elderly Korean woman. She carefully looked me up and down, then smiled, saying, "You good doctor", took my hand and led us through a double set of doors. What I saw literally took my breath away. Inside these walls, running, laughing, playing, were at least 50 Korean children, all whom upon seeing Ann, they excitedly ran towards us, surrounding us with joyful shouts and chatter. At that moment I knew Ann to be someone far more special than I realized. Our trip that morning was to a place far beyond the sphere of regular military life where citizens of an occupied country are classified as either combatant or non-combatant. Our trip was to another world where real people experienced life with both its joys and sorrows. Our trip was to the world of those children, to Ann's world, where she spent her spare time caring for some of the least valued of our world. Ann's heart was with the orphans of South Korea. She saw the surprise and wonder in my eyes and in an instant knew, that I would help out. She looked at me, and stated, "I've heard you are a pretty good medic, well, I need help with those children. Will you help us??" So, I stayed and conducted health examinations.

At first the children was afraid of me, so I took off my camouflage dress, and put on a pair of hospital scrubs that had had in one of the bays. Then she started calling them, each and every one of them by their names. And after the examination, she gave them a candy bar, she told me the children loved them. Throughout the morning we played games, washed little faces, wiped little noses, and helped prepare snacks and the meal for all those little Tommies. The events of that day had a great impact on me. I started to think about my sisters whom I had no contact with for almost ten years. I made a mental note, once I was back stateside I would get in contact with them. The army and especially hardships duty like South Korea is not all fun and games. Women can find it even more difficult than men for a multitude of reasons, but Ann had found her peace by serving the least of them. After that New Year's, while I continued my tour of duty in Korea, I made it a point to go with Ann each and every time she went out to the children. And we always took food, lots of it, because the army was wasteful - and was just going to throw it away. And lots of candy bars, lots!!! I had put up collection boxes throughout the camp. During the course of our ongoing mission in Korea, I witnessed Ann on several occasions having a particularly hard time at the hand of a leadership that didn't care for women serving in a potential combat zone or her mission to the children. Ann took the hardships in stride and coped the best way she knew how. But now, she had a guardian, me, and I used the "power" of "JAG", and in some cases, inviting some to the camp's boxing ring, to get them off her back. She never knew of my covert actions, but the harassment stopped, and her mission grew. Soon 25 other military personnel, both men and women, was going out there with her. I was no saint, and my current situation is evident of that, but I was blessed to be in company of an angel here on earth - and yes, Jews believe in the angelic corp. Ann was proof of that.