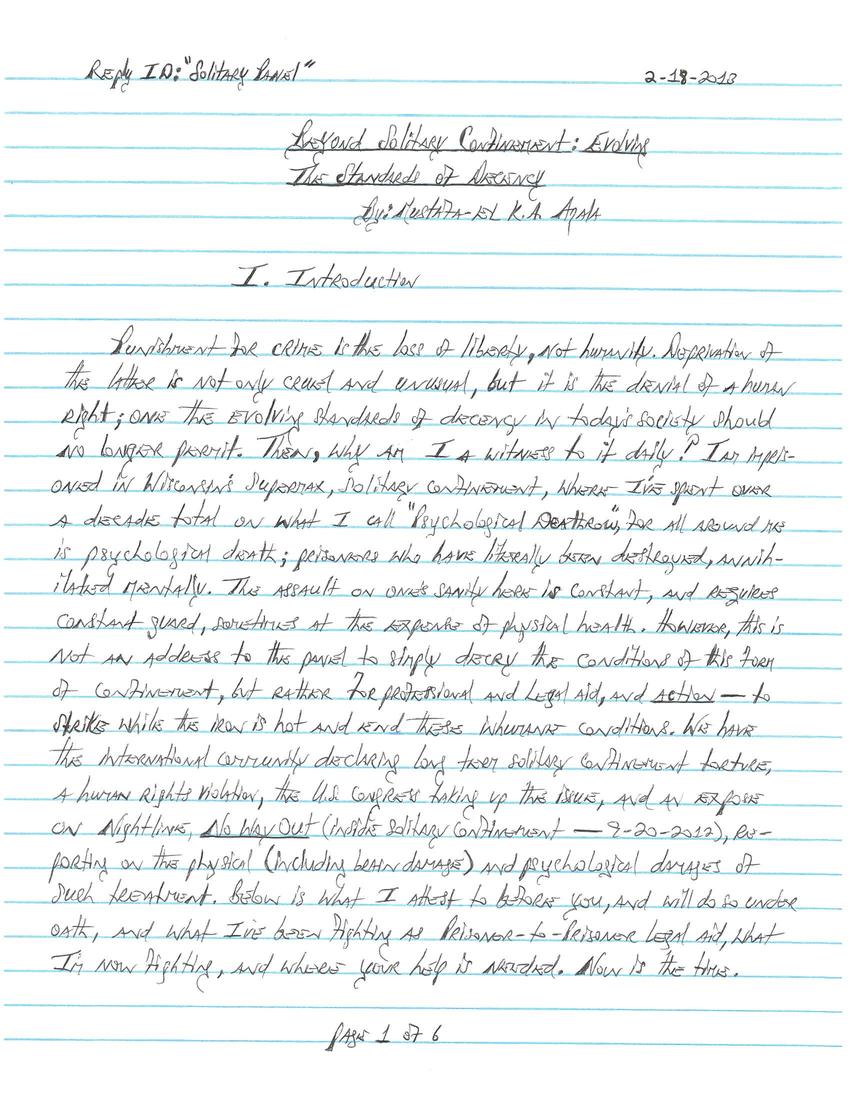 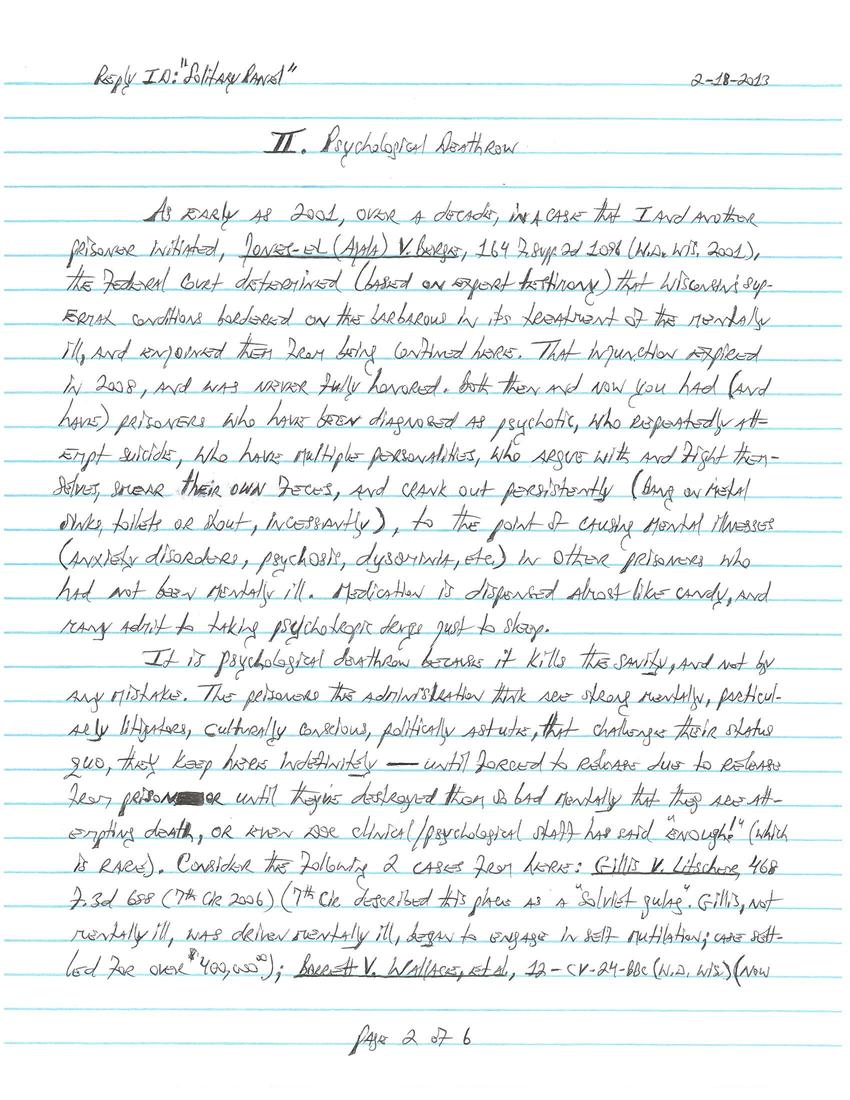 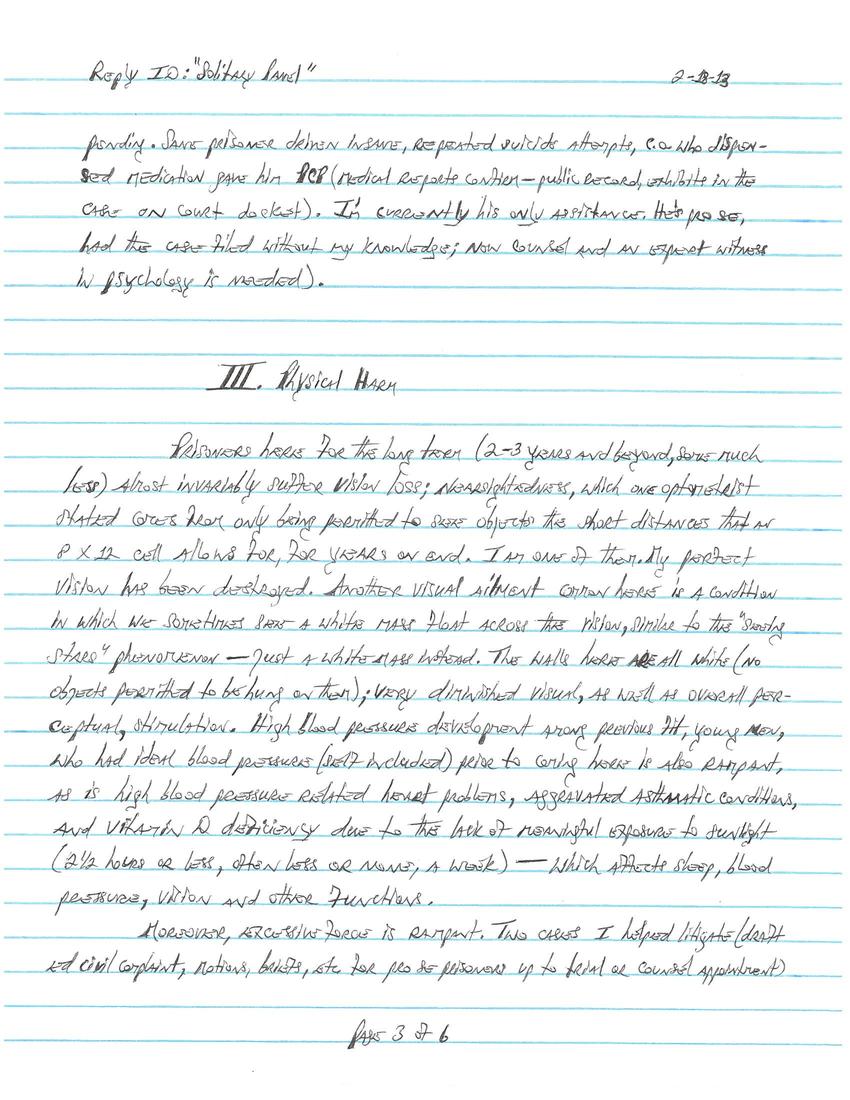 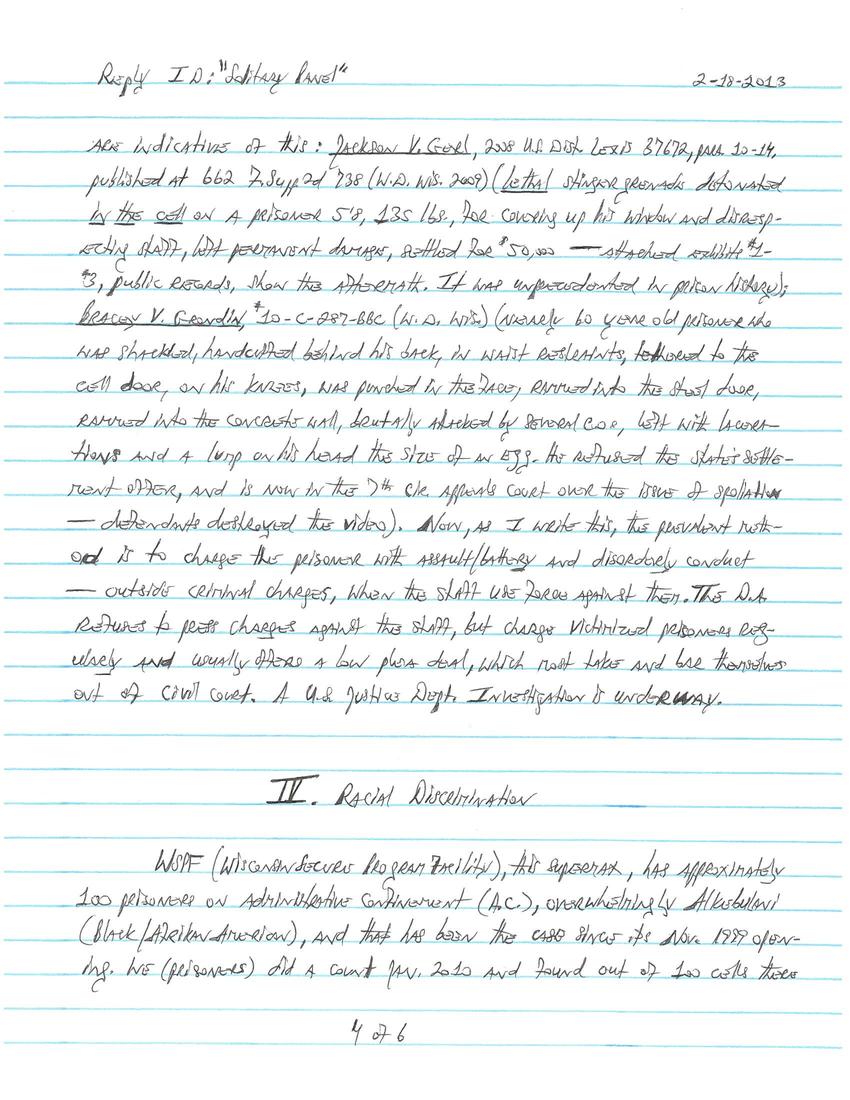 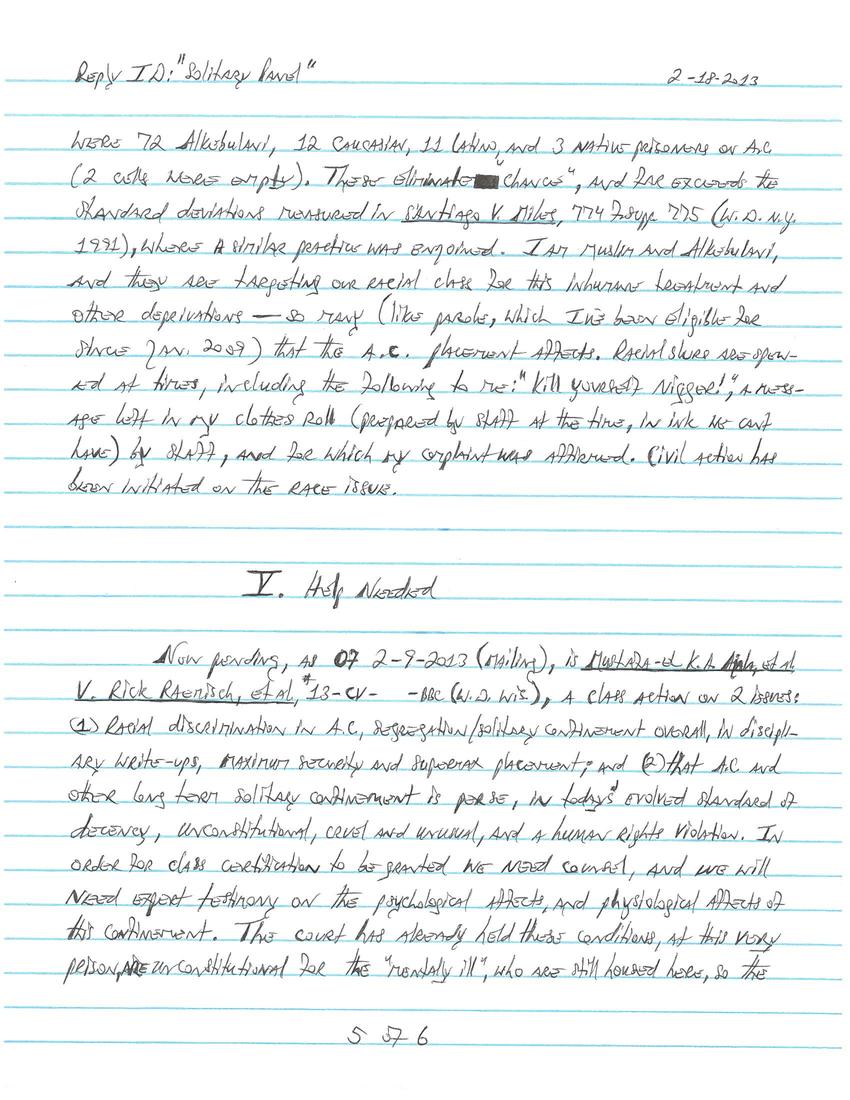 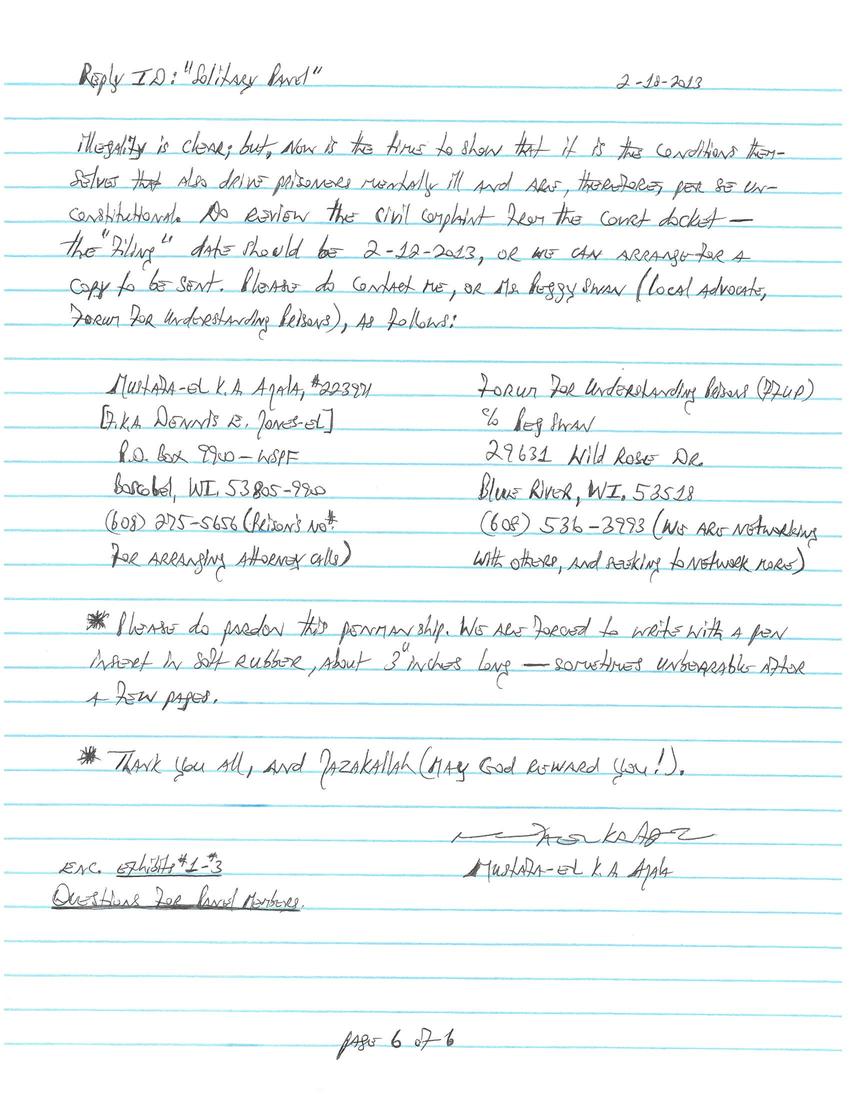 Beyond Solitary Confinement: Evolving the Standards of Decency
By: Mustafa El K.A. Ajala

Punishment for crime is the loss of liberty, not humanity. Deprivation of the latter is not only cruel and unusual, but it is the denial of a human right; one the evolving standards of decency in today's society should no longer permit. Then, why am I a witness to it daily? I am imprisoned in Wisconsin's supermax, solitary confinement, where I've spent over a decade total on what I call "Psychological Death Row", for all around me is psychological death; prisoners who have literally been destroyed, annihilated mentally. The assault on one's sanity here is constant, and requires constant guard, sometimes at the expense of physical health. However, this is not an address to the panel to simply decry the conditions of this form of confinement, but rather for professional and legal aid, and ACTION - to strike while the iron is hot and end these inhumane conditions. We have the international community declaring long term solitary confinement torture, a human rights violation, the U.S. Congress taking up the issue, and an expose on Nightline, No Way Out (Inside Solitary Confinement - 9-20-2013), reporting on the physical (including brain damage) and psychological damages of such treatment. Below is what I attest to before you, and will do so under oath, and what I've been fighting as prisoner-to-prisoner legal aid, what I'm now fighting, and where your help is needed. Now is the time.

As early as 2001, over a decade, in a case that I and another prisoner initiated, Jones-El (Ayala) v. Berge, 164 7.Supp.2d 1096 (W.D. Wis. 2001), the federal court determined (based on expert testimony) that Wisconsin's supermax conditions bordered on the barbarous in its treatment of the mentally ill, and enjoined them from being continued here. That injunction expired in 2008, and was never fully honored. Both then and now you had (and have) prisoners who have been diagnosed as psychotic, who repeatedly attempt suicide, who have multiple personalities, who argue with and fight themselves, smear their own feces, and crank out persistently (bang on metal sinks, toilets or shout, incessantly), to the point of causing mental illnesses (anxiety disorders, psychosis, dysomnia, etc) in other prisoners who had not been mentally ill. Medication is dispensed almost like candy, and many admit to taking psychotropic drugs just to sleep.

It is psychological death row because it kills the sanity, and not by any mistake. The prisoners the administration think are strong mentally, particularly litigators, culturally conscious, politically astute, that challenge their status quo, they keep here indefinitely - until forced to release due to release from prison or until they've destroyed them so bad mentally that they are attempting death, or even DOC clinical/psychological staff has said "Enough!" (which is rare). Consider the following 2 cases from here: Gillis v. Litschene, 468 7.3d 688 (7th Cir 2006) (7th Cir described this place as a "Soviet gulag". Gillis, not mentally ill, was driven mentally ill, began to engage in self mutilation; case settled for over $400,000.00); Barrett v. Wallace, et all, 12-CV-24-BBC (W.D. Wis.) (now pending. Sane prisoner driven insane, repeated suicide attempts, C.O. who dispensed medication gave him PCP (medical reports confirm - public record, exhibits in the case on court docket). I'm currently his ONLY assistance. He's pro se, had the case filed without my knowledge; now counsel and an expert witness in psychology is needed).

Prisoners here for the long term (2-3 years and beyond, some much less) almost invariably suffer vision loss; nearsightedness, which one optometrist stated comes from only being permitted to see objects the short distances that an 8 x 12 cell allows for, for years on end. I am one of them. My perfect vision has been destroyed. Another visual ailment common here is a condition in which we sometimes see a white mass float across the vision, similar to the "seeing stars" phenomenon - just a white mass instead. The walls here are all white (no objects permitted to be hung on them); very diminished visual, as well as overall perceptual, stimulation. High blood pressure development among previous fit, young men, who had ideal blood pressure (self included) prior to coming here is also rampant, as is high blood pressure related heart problems, aggravated asthmatic conditions, and vitamin D deficiency due to the lack of meaningful exposure to sunlight (2 1/2 hours or less, often less or none, a week) - which affects sleep, blood pressure, vision and other functions.

Moreover, excessive force is rampant. Two cases I helped litigate (drafted civil complaint, motions, briefs, etc for pro se prisoners up to trial or counsel appointment) are indicative of this: Jackson v. Gerl, 2008 U.S. Dist. Lexis 37672, pages 10-14, published at 662 7.Supp.2d 738 (W.D. Wis, 2009) (LETHAL stinger grenades detonated IN THE CELL on a prisoner 5'8, 135 lbs, for covering up his window and disrespecting staff, left permanent damage, settled for $50,000 - attached exhibits #1-#3, public records, show the aftermath. It was unprecedented in prison history); Bracey v. Grandin, #10-C-287-BBC (W.D. Wis.) (nearly 60 year old prisoner who was shackled, handcuffed behind his back, in waist restraints, tethered to the cell door, on his knees, was punched in the face, rammed into the steel door, rammed into the concrete wall, brutally attacked by several C.O.s, left with lacerations and a lump on his head the size of an egg. He refused the state's settlement offer, and is now in the 7th Cir Appeals Court over the issue of spoliation - defendants destroyed the video). Now, as I write this, the prevalent method is to charge the prisoner with assault/battery and disorderly conduct - outside criminal charges, when the staff use force against them. The DOJ refuses to press charges against the staff, but charge victimized prisoners regularly and usually offers a low plea deal, which most take and lose themselves out of civil court. A U.S. Justice Dept. investigation is underway.

WSPF (Wisconsin Secure Program Facility), this supermax, has approximately 100 prisoners on Administrative Confinement (A.C.), overwhelmingly Alkebulani (black/African-American), and that has been the case since its No. 1999 opening. We (prisoners) did a count Jan. 2010 and found out of 100 cells there were 72 Alkebulani, 12 Caucasian, 11 Latino and 3 Native prisoners on A.C. (2 cells was empty). These eliminate "chance", and far exceeds the standard deviations measured in Santiago v. Miles, 774 7.Supp 775 (W.D. N.Y. 1991), where a similar practice was enjoined. I am Muslim and Alkebulani, and they are targeting our racial class for this inhumane treatment and other deprivations - so many (like parole, which I've been eligible for since Jan. 2009) that the A.C. placement affects. Racial slurs are spewed at times, including the following to me: "Kill yourself, nigger!", a message left in my clothes roll (prepared by staff at the time, in ink we can't have) by staff, and for which my complaint was affirmed. Civil action has been initiated on the race issue.

Now pending, as of 2-9-2013 (mailing), is Mustafa-El K.A. Ajala, et al v. Rick Raenisch, et al, #13-CV--BBC (W.D. Wis.), a class action on 2 issues: (1) Racial discrimination in A.C., segregation/solitary confinement overall, in disciplinary write-ups, maximum security and supermax placement; and (2) that A.C. and other long term solitary confinement is per se, in today's evolved standard of decency, unconstitutional, cruel and unusual, and a human rights violation. In order for class certification to be granted we need counsel, and we will need expert testimony on the psychological effects, and physiological effects of this confinement. The court has already held these conditions, at this very prison, are unconstitutional for the "mentally ill", who are still housed here, so the illegality is clear; but, now is the time to show that it is the conditions themselves that also drive prisoners mentally ill and are, therefore, per se unconstitutional. So review the civil complaint from the court docket - the "filing" date should be 2-12-2013, or we can arrange for a copy to be sent. Please do contact me, or Ms Peggy Swan (local advocate, Forum for Understanding Prisons), as follows:

* Please do pardon this penmanship. We are forced to write with a pen insert in soft rubber, about 3 inches long - sometimes unbearable after a few pages.

* Thank you all, and Jazakallah (may God reward you!).

* Will you be willing to represent us in the aforementioned class action on the issues of racial discrimination in solitary confinement, et al, and the per se unconstitutionality of solitary confinement in today's evolved standard of decency? Please do review the civil complaint on the court's docket: Mustafa-El K.A. Ajala, et al, v. Rick Raenisch, et al, 2013-CV--BBC (W.D. Wis.) File date should be 2-12-2013. The complaint is very detailed.

* If you are unable to represent us, please do refer us to anyone whom you know that will. Or, will you be able to assist in any way?
* Please do provide the address (someone) to the Harvard Prison Legal Assistance Project?

* Will you be willing to provide expert testimony (on the effects of solitary confinement on one's mental state) in our class action on the matter? In fact, it can be used now in affidavit and report form.

(3) Bobby Dellelo * Would you like to network with us and FFUP? We'd be honored to do so.