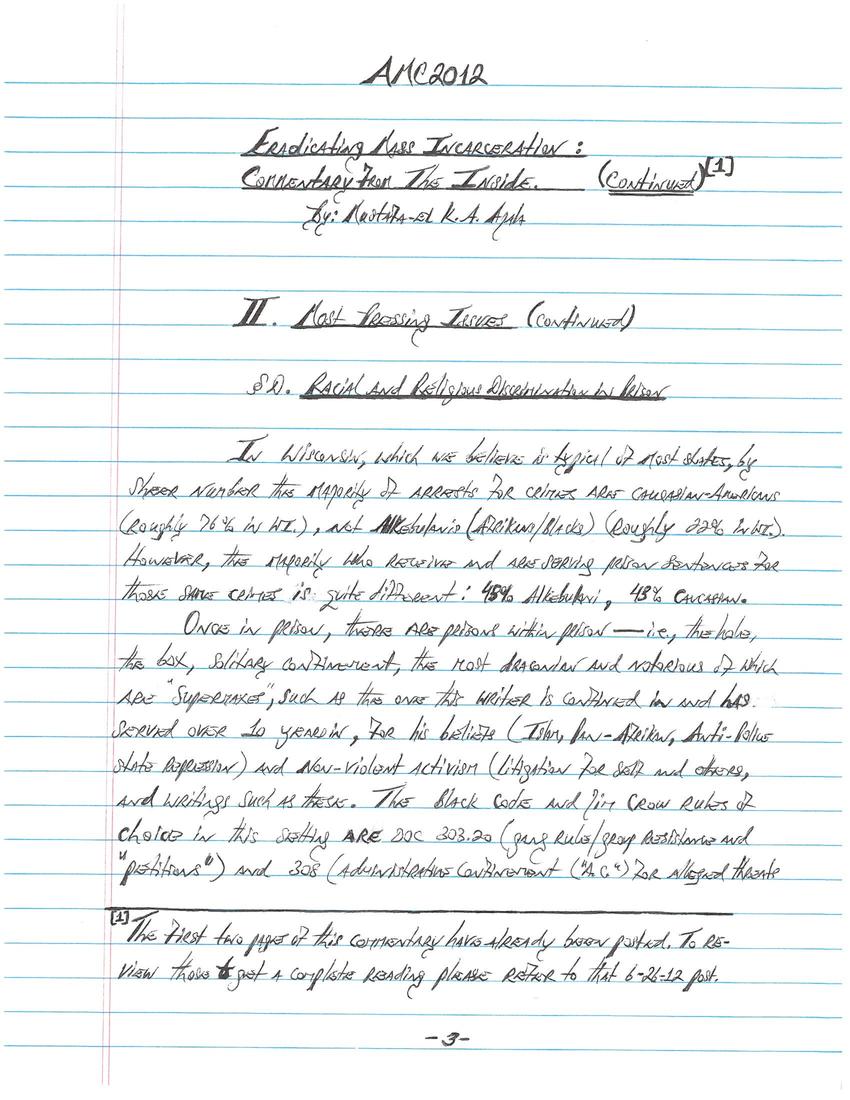 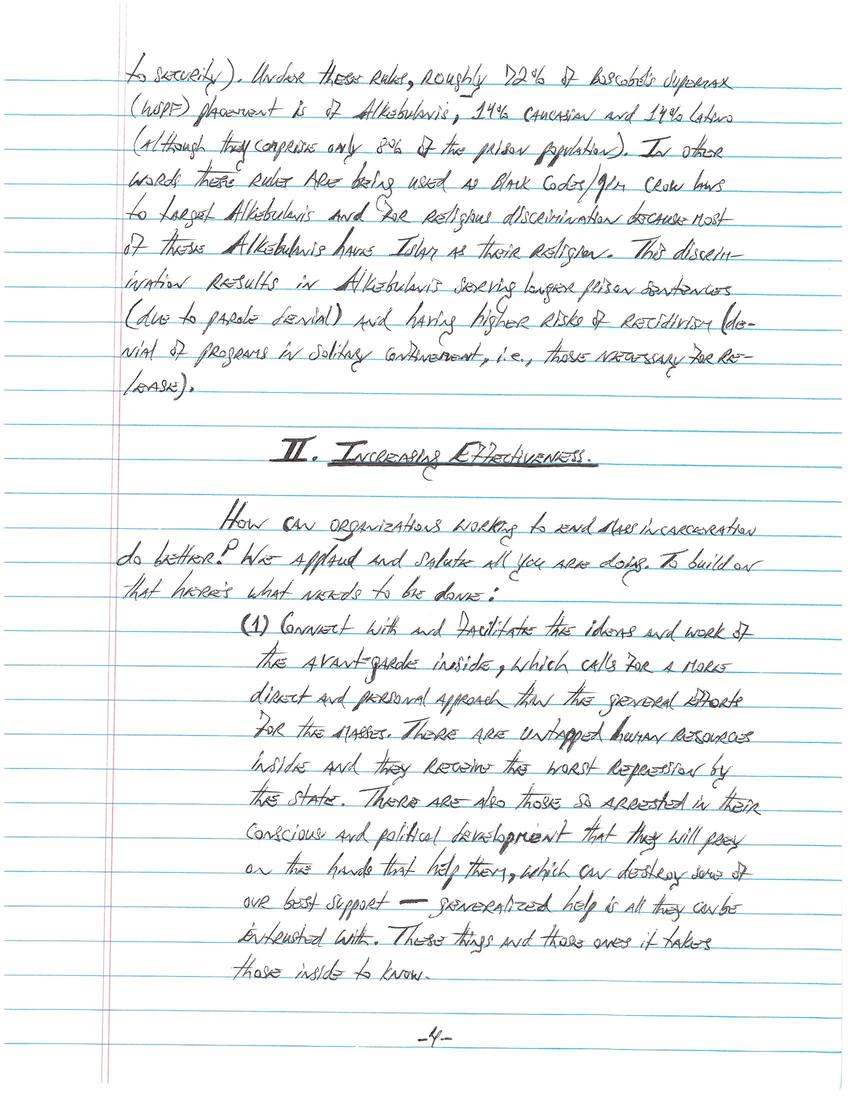 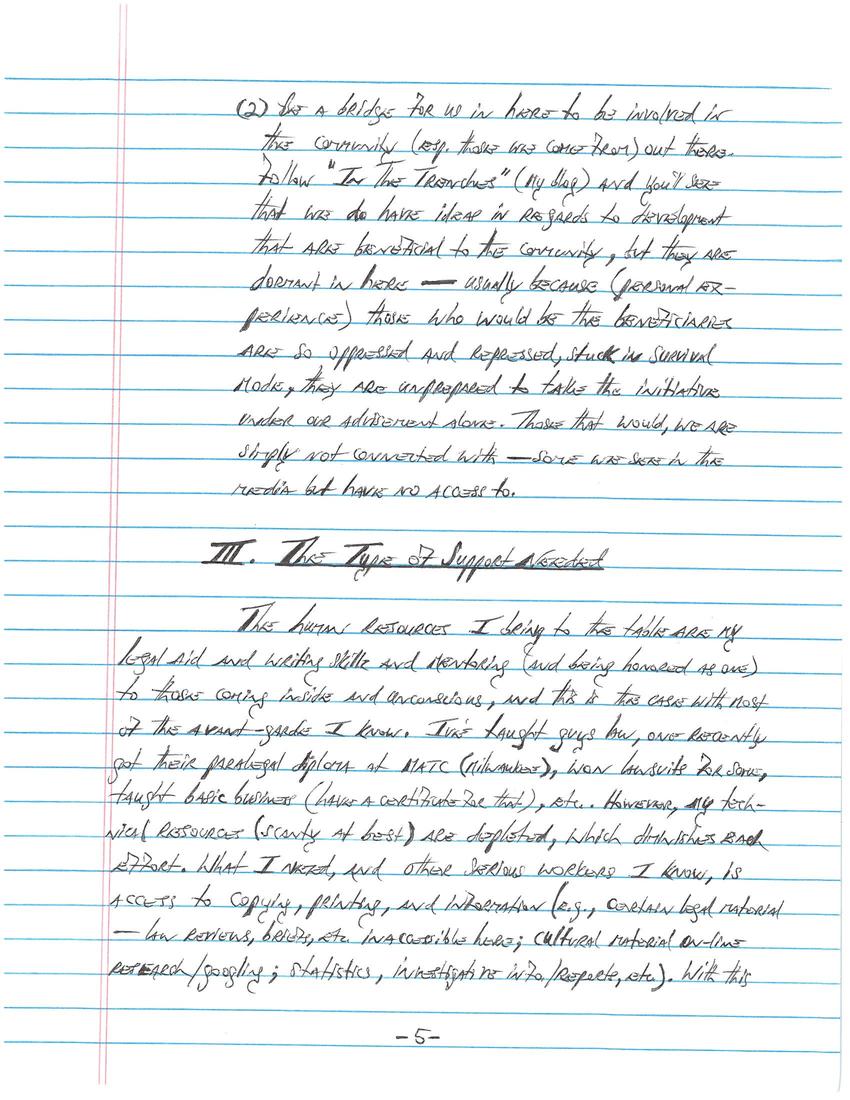 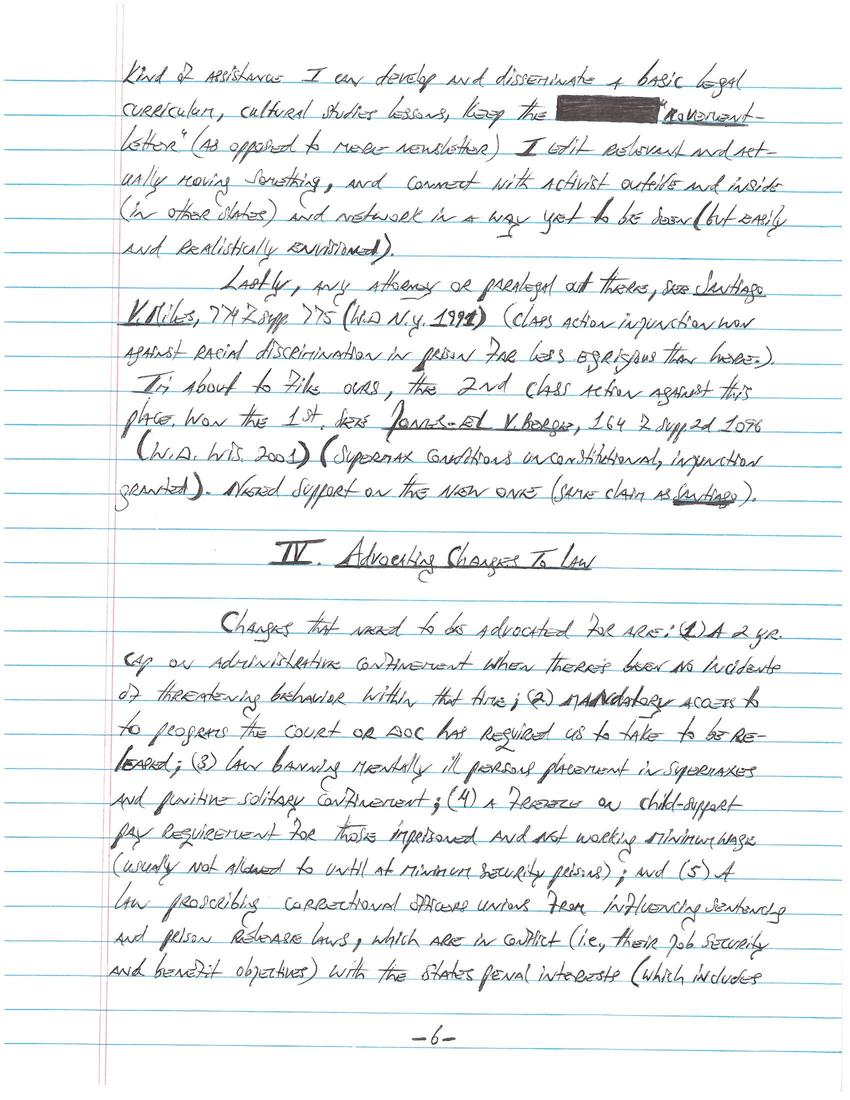 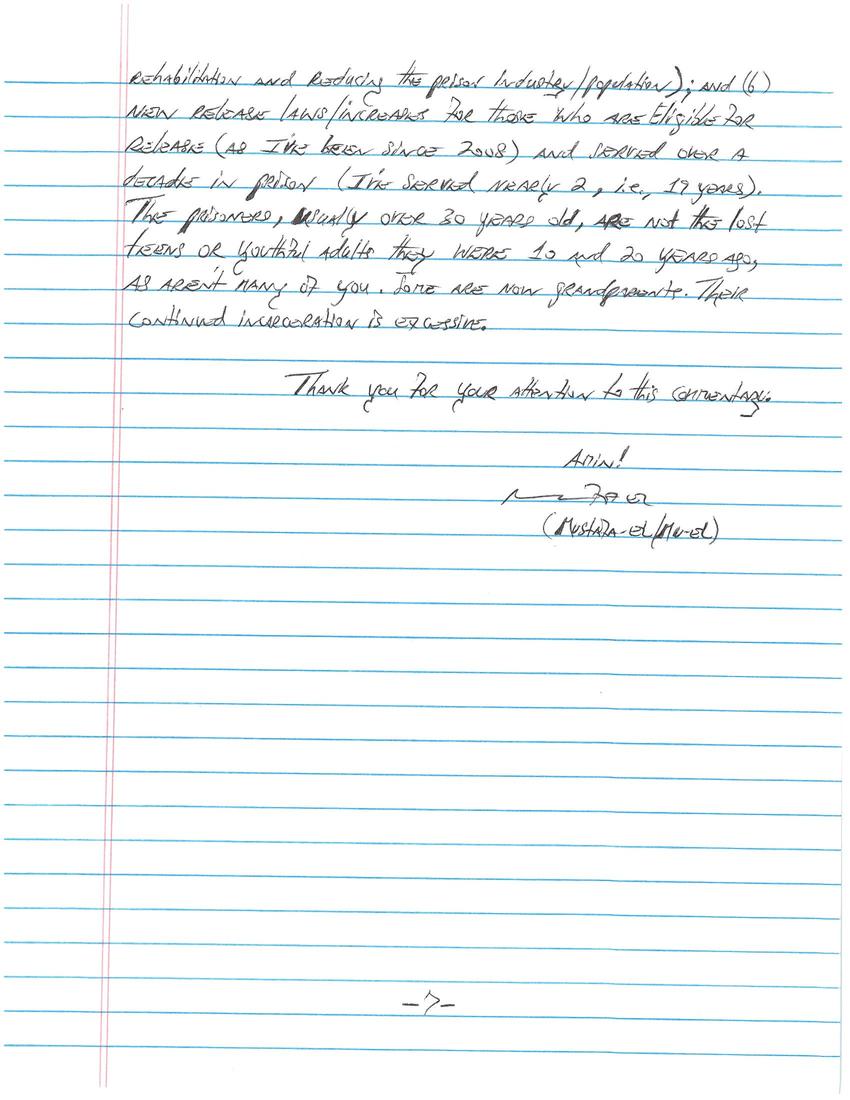 Eradicating Mass Incarceration
Commentary from the inside (continued [1])
by Mustafa-el K.A. Amala

Racial and religious discrimination in prison

In wisonsin, which we believe is typical of most states, by sheer number the majority of arrests for crimes are caucasian-american (roughly 76% in WI), not Alkebulan's (Afrikans/Blacks) (roughly 22% in WI). However, the majority who receive and are serving prison sentences for those same crimes is quite different : 45 % Alkebulani, 43% caucasian.

Once in prison, there are persons within person - i.e., the hole the box, solitary confinement, the most draconian and notorious of which are "supermaxes", such as the one this writer is confined in and has served over 10 years in, for his beliefs (Islam, Pan-Afrikan, Anti-Pollus state repression) and non-violent activism (litigation for self and others, and writings such as these. The Black code and Jim Crow rules of choice in this setting are DOC 303.20 (gang rule/group resistance and "petitions") and 308 (administrative confinement ("A.C") for alleged threats

[1] The first two pages of this commentary have already been posted. To re-view these and get a complete reading please refer to that 6-26-12 post.

to security). Under these rules, roughly 72% of Buscobel's Sypermax (HSPF) placement is of Alkebulanis, 14% caucasian and 14% latino (although the comprise only 8% of the prison population). In other words these rules are being used as Black codes/gm crow laws to target Alkebulanis and for religious discrimination because most of these Alkebulanis have Islam as their religion. This discrimination results in Alkebulanis serving longer prison sentences (due to parole denial) and having higher risks of recidivism (denial of programs in solitary confinement, i.e, those necessary for release).

How can organizations working to end these incarcerations do better? We applaud and salute all you are doing. To build on that here's what needs to be done:
(1) Connect with and facilitate the ideas and work of the avant-garde inside, which calls for a more direct and personal approach than the general efforts for the masses. There are untapped human resources inside and they regaine the worst repression by the state. There are also those so arrested in their conscious and political development that they will prey on the hands that help them, which can destroy some of our best support - generalized help is all they can be entrusted with. These things and those ones it takes those inside to know.
(2) Be a bridge for us in here to be involved in the community (esp. those who come from) out there. Follow "in the trenches" (my blog) and you'll see that we do have ideas in regards to development that are beneficial to the community, but they are dormant in here - usually because (personal experience) those who would be the beneficiaries are so oppressed and repressed, stuck in survival mode, they are unprepared to take the initiative under our advertisement alone. Those that would, we are simply not connected with - some we see in the media but have no access to.

III The Type of Support Needed

The human resources i bring to the table are my legal aid and writing skills and mentoring (and being honored as one) to those coming inside and unconscious, and this is the base with most of the avant-garde I know. I've taught guys law, one recently got their paralegal diploma at MATC (Milwaukee), won lawsuits for some, taught basic business (have a certificate in that), etc. However, my technical resources (scanty at best) are depleted, which diminishes back effort. What I need, and other serious workers I know, is access to copying, printing, and information (e.g. certain legal material - law reviews, briefs, etc. inaccessible here; cultural material on-line research/googling; statistics, investigative info/reports, etc). With this kind of assistance I can develop and disseminate a basic legal curriculum, cultural studies lessons, keep the "movement letter" (as opposed to be mere newsletter) I edit relevant and actually moving something, and comment with activists outside and inside (in other states) and network in a way yet to be done (but easily and realistically envisioned).

IV Advocating changes to law
Changes that need to be advocated for are: (1) A 2 yr. cap on administrative confinement where theres been no incidents of threatening behavior within that time; (2) mandatory access to the programs the courst or DOC has required us to take to be re-learned; (2) law banning mentally ill persons placement in supermaxes and punitive solitary confinement; (4) a freeze on child-support pay requirement for those imprisoned and not working minimum wage (usually not allowed to until at minimum security prisons); and (5) a law proscribing correctional officers unions from influencing sentencing and prison release laws, which are in conflict (i.e., there job security and benefit objectives) with the states penal interests (which includes rehabilitation and reducing the prison industry/population); and (6) new release laws/increases for those who are eligible for release (as I've been since 2008) and served over a decade in prison (I've served nearly 2, i.e. 19 years). The prisoners, usually over 30 years old, are not the lost teens or youthful adults they were 10 and 20 years ago, as aren't many of you. Some are now grandparents. Their continued incarceration in excessive.

Thank you for your attention to this commenary.