Who Says Wisconsin Doesn't Have The Death Penalty? 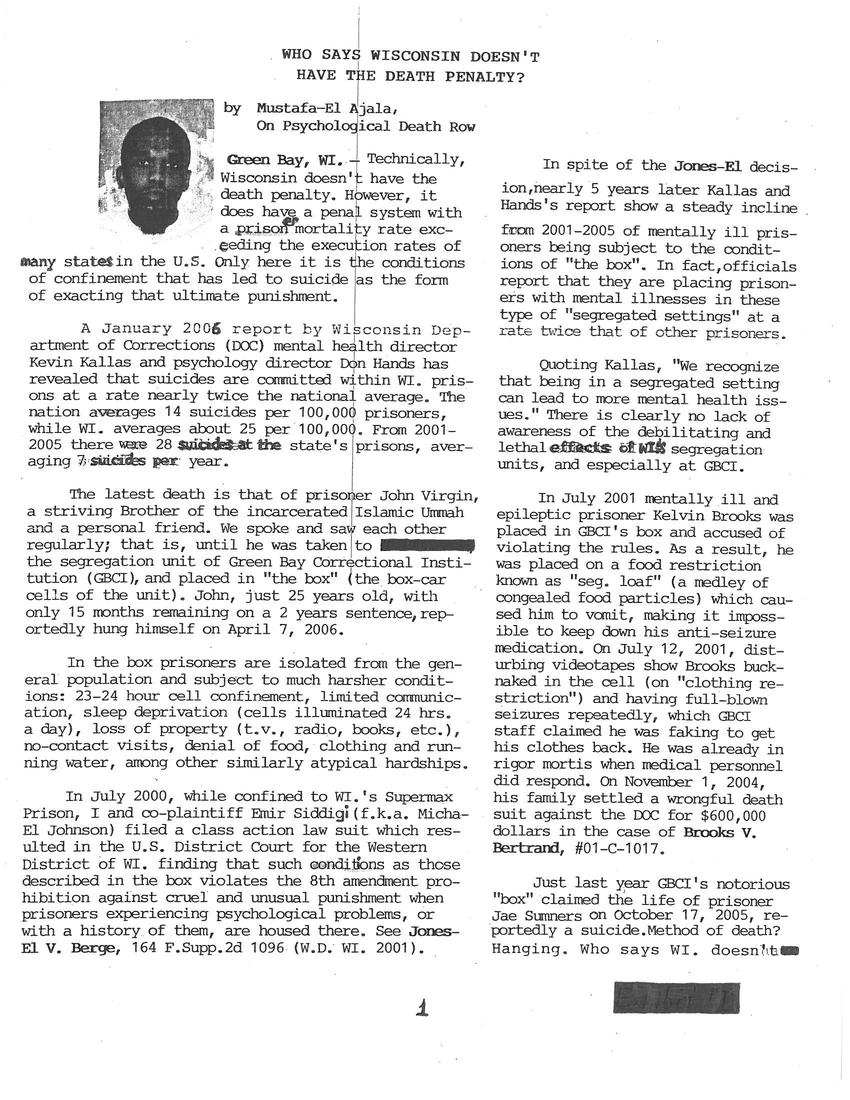 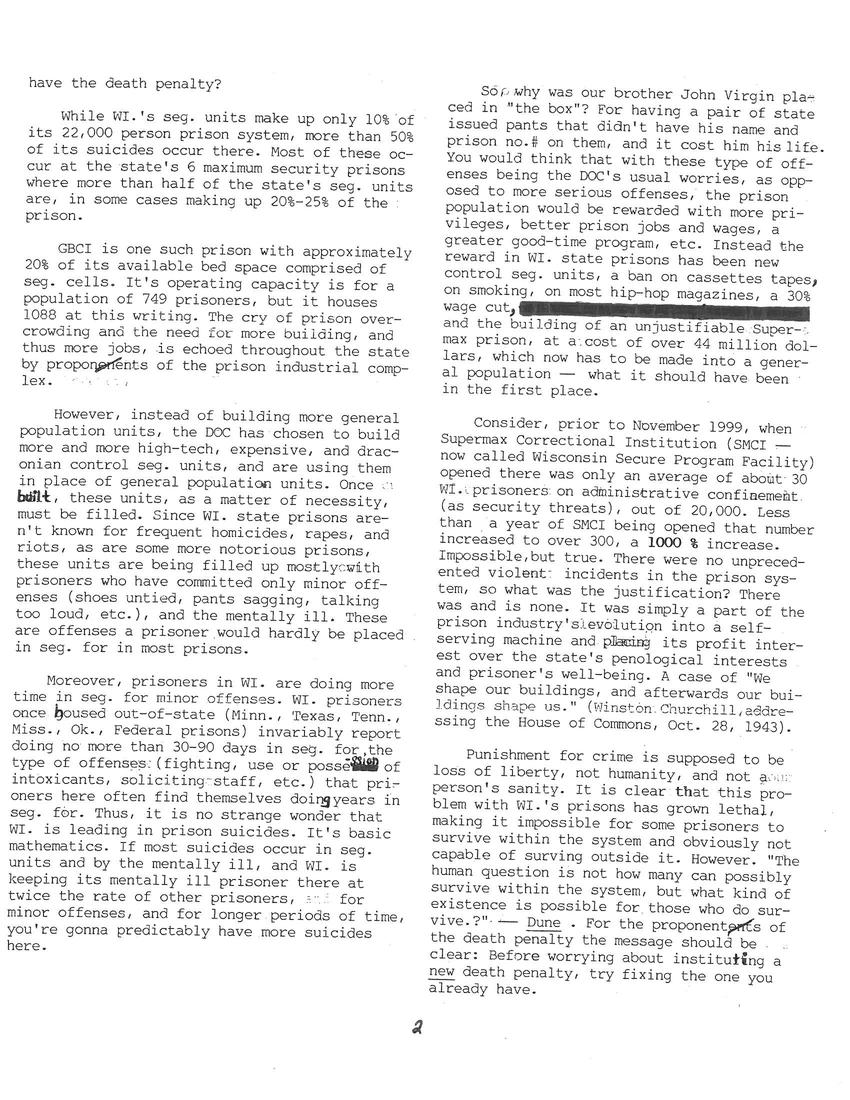 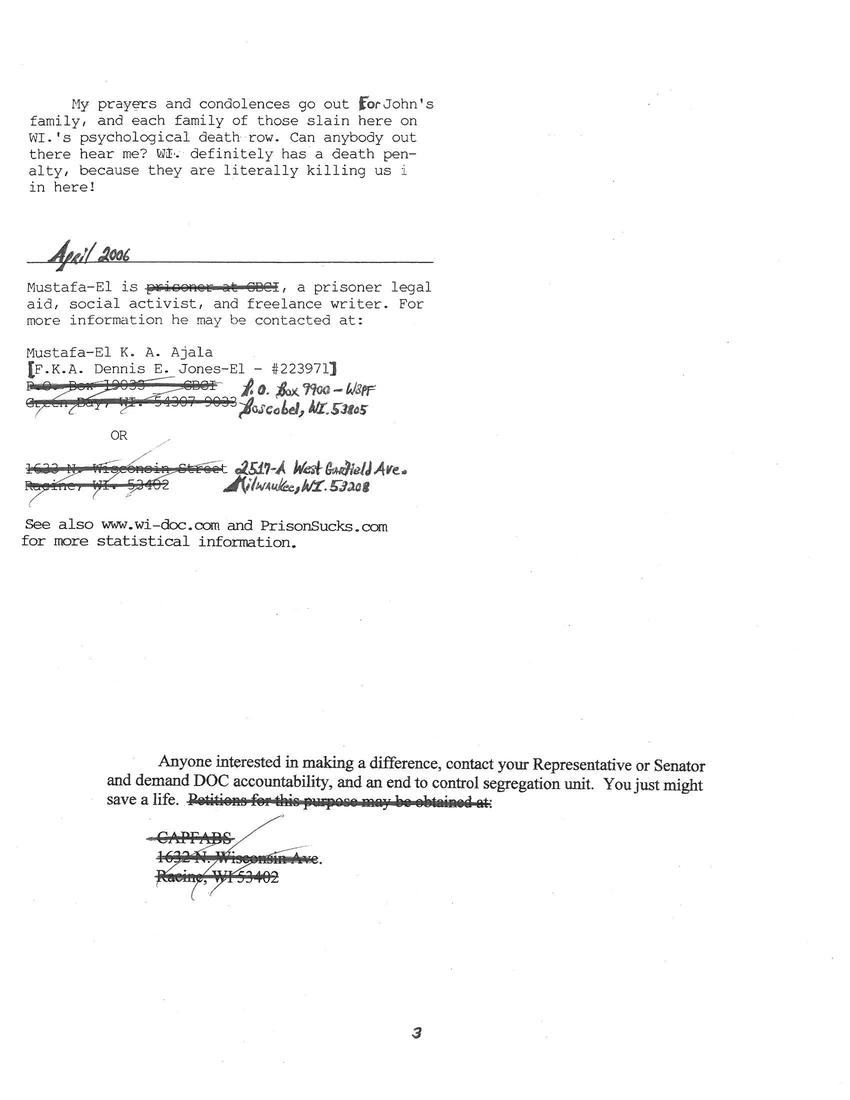 WHO SAYS WISCONSIN DOESN'T HAVE THE DEATH PENALTY?

Green Bay, WI. - Technically, Wisconsin doesn't have the death penalty. However, it does have a penal system with a prisoner mortality rate exceeding the execution rates of many states in the U.S. Only here it is the conditions of confinement that has led to suicide as the form of exacting that ultimate punishment.

A January 2006 report by Wisconsin Department of Corrections (DOC) mental health director Don Hands has revealed that suicides are committed within WI. prisons at a rate nearly twice the national average. The nation averages 14 suicides per 100,000 prisoners, while WI. averages about 25 per 100,000. From 2001-2005 there were 28 suicides at the state's prisons, averaging 7 suicides per year.

The latest death is that of prisoner John Virgin, a striving Brother of the incarcerated Islamic Ummah and a personal friend. We spoke and saw each other regularly; that is, until he was taken to [censored], the segregation unit of Green Bay Correctional Institution (GBCI), and placed in "the box" (the box-car cells of the unit). John, just 25 years old, with only 15 months remaining on a 2 years sentence, reportedly hung himself on April 7, 2006.

In July 2000, while confined to WI.'s Supermax Prison, I an co-plaintiff Emir Siddigi (f.k.a. Michael El Johnson) filed a class action law suit which resulted in the U.S. District Court for the Western District of WI. finding that such conditions as those described in the box violates the 8th amendment prohibition against cruel and unusual punishment when prisoners experiencing psychological problems, or with a history of them, are housed there. See Jones-El v. Berge, 164 F.Supp.2d 1096 (W.D. WI. 2001).

In spite of the Jones-El decision, nearly 5 years later Kallas and Hands's report show a steady incline from 2001-2005 of mentally ill prisoners being subject to the conditions of "the box". In fact, officials report that they are placing prisoners with mental illnesses in these type of "segregated settings" at a rate twice that of other prisoners.

Quoting Kallas, "We recognized that being in a segregated setting can lead to more mental issues." There is clearly no lack of awareness of the debilitating and lethal effects of WI.'s segregation units, and especially at GBCI.

In July 2001 mentally ill and epileptic prisoner Kelvin Brooks was placed in GBCI's box and accused of violating the rules. As a result, he was placed on a food restriction known as "seg. loaf" (a medley of congealed food particles) which caused him to vomit, making it impossible to keep down his anti-seizure medication. On July 12, 2001, disturbing videotapes show Brooks buck-naked in the cell (on "clothing restriction") and having full-blown seizures repeatedly, which GBCI staff claimed he was faking to get his clothes back. He was already in rigor mortis when medical personnel did respond. On November 1, 2004, his family settled a wrongful death suit against the DOC for $600,000 in the case of Brooks v. Bertrand, #01-C-1017.

While WI.'s seg. units make up only 10% of its 22,000 person prison system, more than 50% of its suicides occur there. Most of these occur at the state's 6 maximum security prisons where more than half of the state's seg. units are, in some cases making up 20%-25% of the prison.

GBCI is one such prison with approximately 20% of its available bed space comprised of seg. cells. It's operating capacity is for a population of 749 prisoners, but it houses 1088 at this writing. The cry of prison over-crowding and the need for more building, and thus more jobs, is echoed throughout the state by proponents of the prison industrial complex.

However, instead of building more general population units, the DOC has chosen to build more and more high-tech, expensive, and draconian control seg. units, and are using them in place of general population units. Once built, these units, as a matter of necessity, must be filled. Since WI. state prisons aren't known for frequent homicides, rapes, and riots, as are some notorious prisons, these units are being filled up mostly with prisoners who have committed only minor offenses (shoes untied, pants sagging, talking too loud, etc.) and the mentally ill. These are offenses a prisoner would hardly be placed in seg. for in most prisons.

Moreover, prisoners in WI. are doing more time in seg. for minor offenses. WI. prisoners once housed out-of-state (Minn., Texas, Tenn., Miss., Ok., Federal prisons) invariably report doing no more than 30-90 days in seg. for the type of offenses (fighting, use or possession of intoxicants, soliciting staff, etc.) that prisoners here often find themselves doing years in seg. for. Thus, it is no strange wonder that WI. is leading in prison suicides. It's basic mathematics. If most suicides occur in seg. units and by the mentally ill, and WI. is keeping its mentally ill prisoners there at twice the rate of other prisoners, and for minor offenses, and for longer periods of time, you're gonna predictably have more suicides here.

So why was our brother John Virgin placed in "the box"? For having a pair of state-issued pants that didn't have his name and prison no.# on them, and it cost him his life. You would think that with these type of offenses being the DOC's usual worries, as opposed to more serious offenses, the prison population would be rewarded with more privileges, better prison jobs and wages, a greater good-time program, etc. Instead the reward in WI. state prisons has been new control seg. units, a ban on cassette tapes, on smoking, on most hip-hop magazines, a 30% wage cut, [censored], and the building of an unjustifiable Supermax prison, at a cost of over 44 million dollars, which now has to be made into a general population - what it should have been in the first place.

Consider, prior to November 1999, when Supermax Correctional Institution (SMCI - now called Wisconsin Secure Program Facility) opened there was only an average of about 30 WI. prisoners on administrative confinement (as security threats), out of 20,000. Less than a year of SMCI being opened that number increased to over 300, a 1000% incraese. Impossible, but true. There were no unprecedented violent incidents in the prison system, so what was the justification? There was and is none. It was simply a part of the prison industry's evolution into a self-serving machine and placing its profit interest over the state's penological interests and prisoner's well-being. A case of "We shape our buildings, and afterwards our buildings shape us." (Winston Churchill, addressing the House of Commons, Oct. 28, 1943).

Punishment for crime is supposed to be loss of liberty, not humanity, and not a person's sanity. It is clear that this problem with WI.'s prisons has grown lethal, making it impossible for some prisoners to survive within the system and obviously not capable of surviving outside it. However, "The human question is not how many can possibly survive within the system, but what kind of existence is possible for those who do survive?" - Dune. For the proponents of the death penalty, the message should be clear: Before worrying about instituting a new death penalty, try fixing the one you already have.

My prayers and condolences go out for John's family ,and each family of those slain here on WI.'s psychological death row. Can anybody out there hear me? WI. definitely has a death penalty, because they are literally killing us in here!

Mustafa-El is a prisoner legal aid, social activist, and freelance writer. For more information he may be contacted at:

Anyone interested in making a difference, contact your Representative or Senator and demand DOC accountability and an end to control segregation unit. You just might save a life.

Solitary confinement is a DISGRACE to our common humanity. prisoners lose their right to live in a free SOCIETY. but no where in their sentence were they sentenced to cruel INSANITY. thousands of prisoners in this country are being buried alive and this is the most outrageous civil rights issue that is happening on American soil. Someone needs to report this to the FBI there needs to be investigations as to what really goes on in these prisons. Your strength is infinite and your work to fight segregation is so wonderful. I don't know anyone in prison but this issue grabbed me by the throat. Currently Wisconsin prisoners are holding a hunger strike to protest long term solitary confinement. I stand in solidarity with these prisoners and prisoners all around this country who are subject to the most INHUMANE conditions. I've been sending letters to people to demand DOC accountability. I wish I could just end it myself right now. The problem is, not enough people know how brutally the US treats its prisoners. It is one of the worst prison systems in the entire world. It needs to end. we need change and we need it NOW.