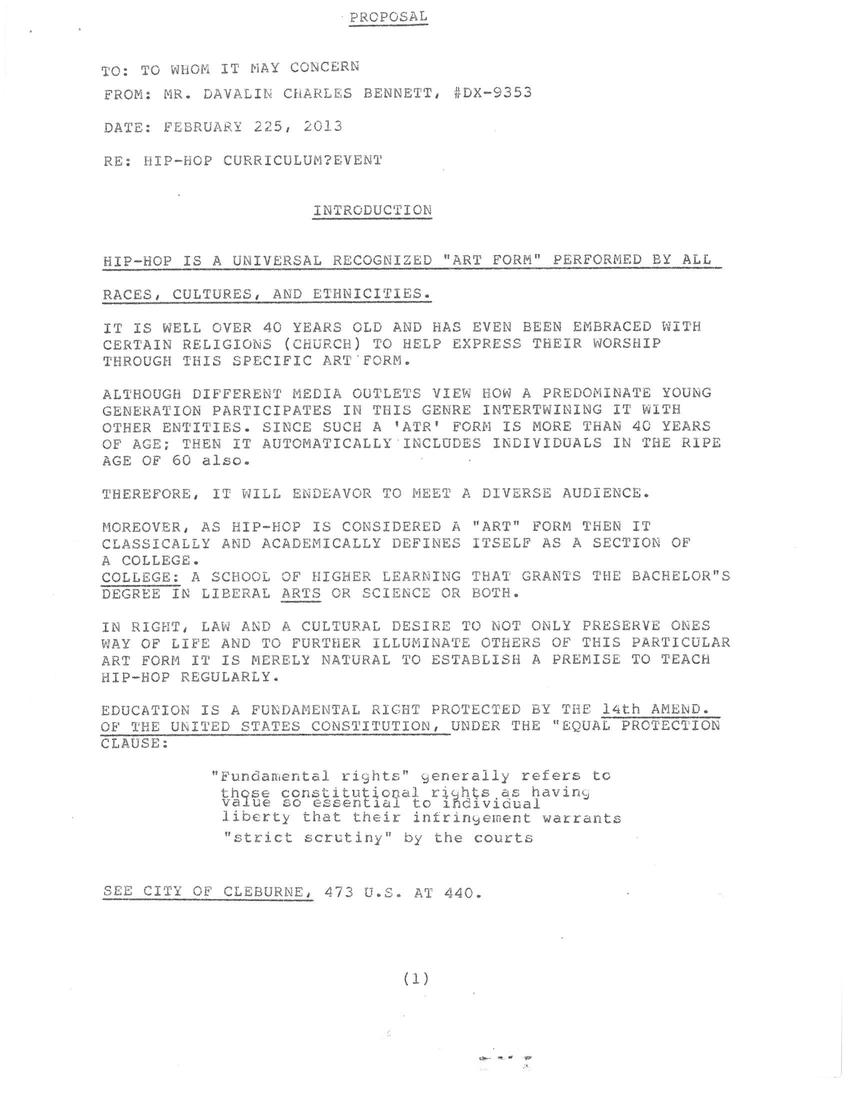 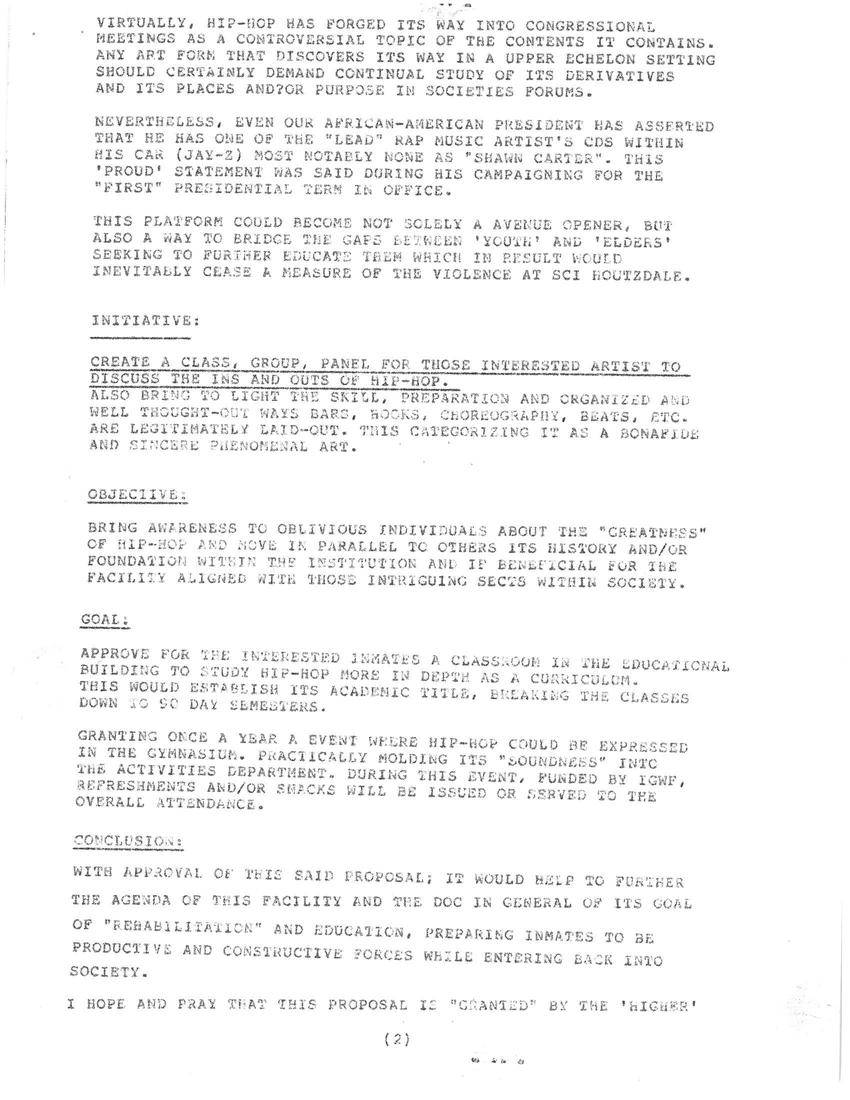 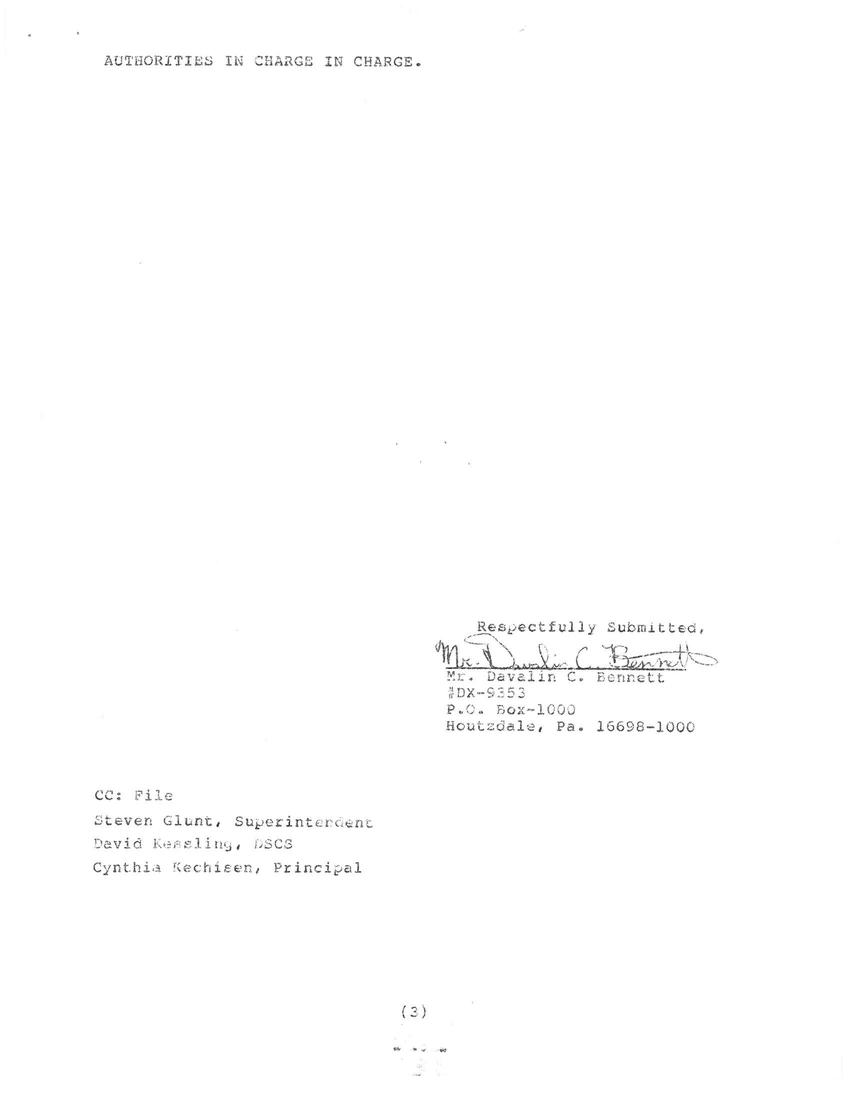 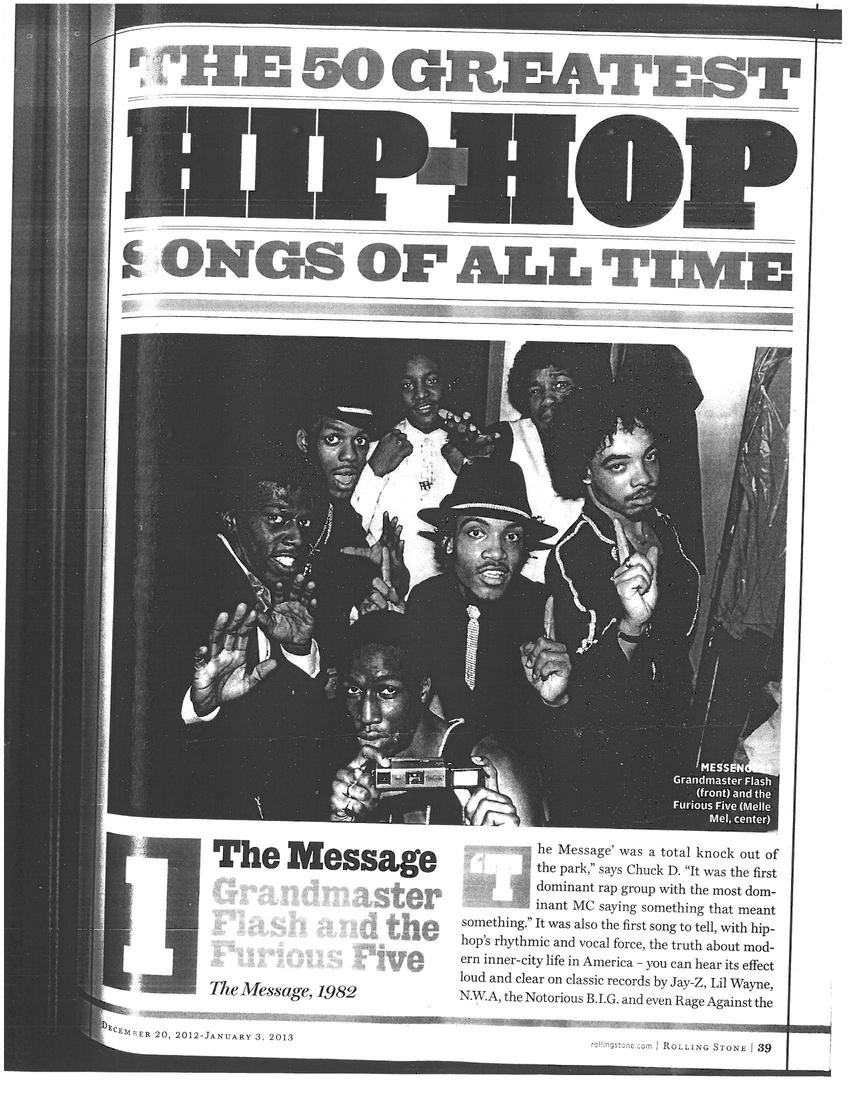 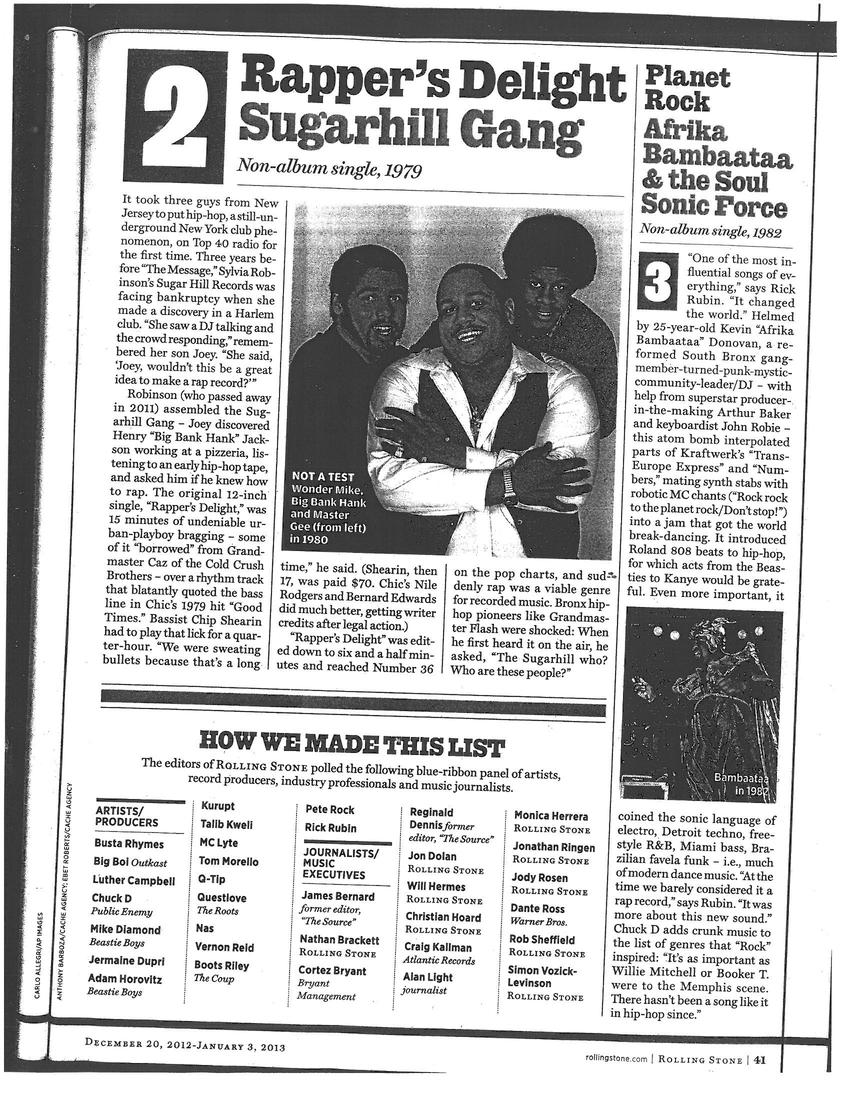 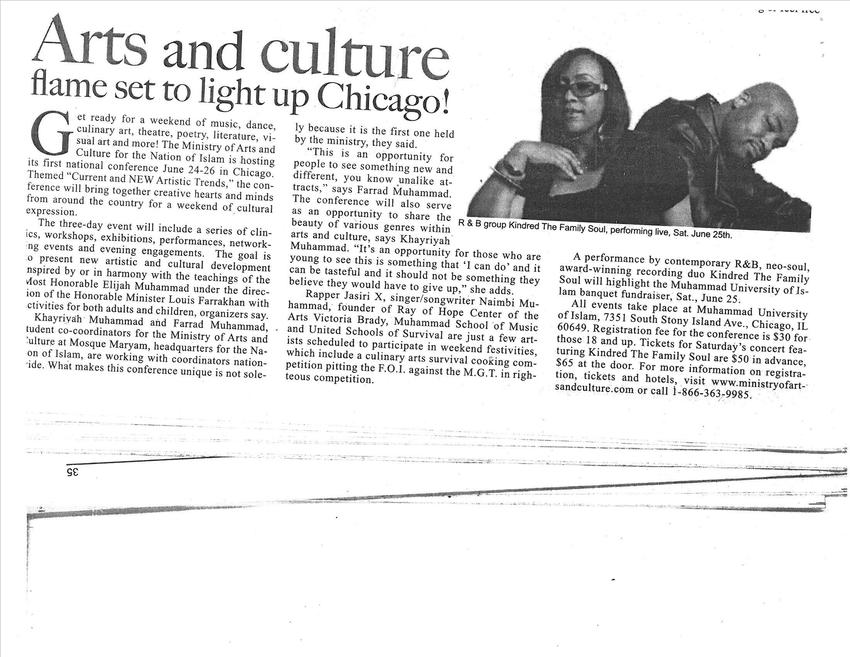 TO: TO WHOM IT MAY CONCERN
FROM: MR. DAVALIN CHARLES BENNETT, #DX-9353

Hip-hop is a universal recognized "art form" performed by all races, cultures, and ethnicities.

It is well over 40 years old and has even been embraced with certain religions (church) to help express their worship through this specific art form.

Although different media outlets view how a predominant young generation participates in this genre intertwining it with other entities. Since such an 'art' form is more than 40 years of age; then it automatically includes individuals in the ripe age of 60 also.

Therefore, it will endeavor to meet a diverse audience.

Moreover, as hip-hop is considered an "art" form than it classically and academically defines itself as a section of a college.

COLLEGE: A school of higher learning that grants the bachelor's degree in liberal ARTS or science or both.

In right, law and a cultural desire to not only preserve one's way of life and to further illuminate others of this particular art form it is merely natural to establish a premise to teach hip-hop regularly.

Education is a fundamental right protected by the 14th Amend. of the United States Constitution, under the "equal protection" clause:

"Fundamental rights" generally refers to those constitutional rights as having value so essential to individual liberty that their infringement warrants "strict scrutiny" by the courts.

Virtually, hip-hop has forged its way into congressional meetings as a controversial topic of the contents it contains. Any art form that discovers its way in an upper echelon setting should certainly demand continual study of its derivatives and its places and/or purpose in society's forums.

Nevertheless, even our African-American president has asserted that he has one of the "lead" rap music artists' CDs within his car (Jay-Z) most notably known as "Shawn Carter". This 'proud' statement was said during his campaigning for the "first" presidential term in office.

This platform could become not solely an avenue opener, but also a way to bridge the gaps between 'youth' and 'elders' seeking to further educate them which in result would inevitably cease a measure of the violence at SCI Houtzdale.

Create a class, group, panel for those interested artists to discuss the ins and outs of hip-hop.
Also bring to light the skill, preparation and organized and well-thought-out ways bars, hooks, choreography, beats, etc. are legitimately laid-out. This categorizing it as a bonafide and sincere phenomenal art.

Bring awareness to oblivious individuals about the "greatness" of hip-hop and move in parallel to others its history and/or foundation within the institution and if beneficial for the facility aligned with those intriguing sects within society.

Approve for the interested inmates a classroom in the educational building to study hip-hop more in depth as a curriculum. This would establish its academic title, breaking the classes down to 90 day semesters.

Granting once a year an event where hip-hop could be expressed in the gymnasium. Practically molding its "soundness" into the activities department. During this event, funded by IGWF, refreshments and/or snacks will be issued or served to the overall attendance.

With approval of this said proposal; it would help to further the agenda of this facility and the DOC in general of its goal of "rehabilitation" and education, preparing inmates to be productive and constructive forces while entering back into society.

I hope and pray that this proposal is "granted" by the 'higher' authorities in charge in charge.

THE 50 GREATEST HIP-HOP SONGS OF ALL TIME

1. The Message
Grandmaster Flash and the Furious Five
The Message, 1982

"'The Message' was a total knock out of the park", says Chuck D. "It was the first dominant rap group with the most dominant MC saying something that meant something." It was also the first song to tell, with hip-hop's rhythmic and vocal force, the truth about modern inner-city life in America - you can hear its effect loud and clear on classic records by Jay-Z, Lil Wayne, N.W.A., the Notorious B.I.G. and even Rage Against the [scan cuts off]

It took three guys from New Jersey to put hip-hop, a still-underground New York club phenomenon, on Top 40 radio for the first time. Three years before "The Message", Sylvia Robinson's Sugar Hill Records was facing bankruptcy when she made a discovery in a Harlem club. "She saw a DJ talking and the crowd responding", remembered her son Joey. "She said, 'Joey, wouldn't this be a great idea to make a rap record?'"

Robinson (who passed away in 2011) assembled the Sugarhill Gang - Joey discovered Henry "Big Bank Hank" Jackson working at a pizzeria, listening to an early hip-hop tape, and asked him if he knew how to rap. The original 12-inch single, "Rapper's Delight", was 15 minutes of undeniable urban-playboy bragging - some of it "borrowed" from Grandmaster Caz of the Cold Crush Brothers - over a rhythm track that blatantly quoted the bass line in Chic's 1979 hit "Good Times". Bassist Chip Shearin had to play that lick for a quarter-hour. "We were sweating bullets because that's a long time", he said. (Shearin, then 17, was paid $70. Chic's Nile Rodgers and Bernard Edwards did much better, getting writer credits after legal action).

"Rapper's Delight" was edited down to six and a half minutes and reached Number 36 on the pop charts, and suddenly rap was a viable genre for recorded music. Bronx hip-hop pioneers like Grandmaster Flash were shocked: When he first heard it on the air, he asked, "The Sugarhill who? Who are these people?"

"One of the most influential songs of everything", says Rick Rubin. "It changed the world." Helmed by 25-year-old Kevin "Afrika Bambaataa" Donovan, the reformed South Bronx gang-member-turned-punk-mystic-community-leader/DJ - with help from superstar producer-in-the-making Arthur Baker and keyboardist John Robie - this atom bomb interpolated parts of Kraftwerk's "Trans-Europe Express" and "Numbers", mating synth stabs with robotic MC chants ("Rock rock to the planet rock/Don't stop!") into a jam that got the world break-dancing. It introduced Roland 808 beats to hip-hop, for which acts from the Beasties to Kanye would be grateful. Even more important, it coined the sonic language of electro, Detroit techno, freestyle R&B, Miami bass, Brazilian favela funk - i.e., much of modern dance music. "At the time we barely considered it a rap record", says Rubin. "It was more about this new sound." Chuck D adds crunk music to the list of genres that "Rock" inspired: "It's as important as Willie Mitchell or Booker T. were to the Memphis scene. There hasn't been a song like it in hip-hop since."

Arts and culture flame set to light up Chicago!

Get ready for a weekend of music, dance, culinary art, theatre, poetry, literature, visual art and more! The Ministry of Arts and Culture for the Nation of Islam is hosting its first national conference June 24-26 in Chicago. Themed "Current and NEW Artistic Trends, the conference will bring together creative hearts and minds from around the country for a weekend of cultural expression.

The three-day event will include a series of clinics, workshops, exhibitions, performances, networking events and evening engagements. The goal is to present new artistic and culture development inspired by or in harmony with the teachings of the Most Honorable Elijah Muhammad under the direction of the Honorable Minister Louis Farrakhan with activities for both adults and children, organizers say.

Khayriyah Muhammad and Farrad Muhammad, student co-coordinators for the Ministry of Arts and Culture at Mosque Maryam, headquarters for the Nation of Islam, are working with coordinators nationwide. What makes this conference unique is not solely because it is the first one held by the ministry, they said.

Rapper Jasiri X, singer/songwriter Naimbi Muhammad, founder of Ray of Hope Center for the Arts Victoria Brady, Muhammad School of Music and United Schools of Survival are just a few artists scheduled to participate in weekend festivities, which include a culinary arts survival cooking competition pitting the F.O.I. against the M.G.T. in righteous competition.

All events take place at Muhammad University of Islam, 7351 South Stony Island Ave., Chicago, IL 60649. Registration fee for the conference is $30 for those 18 and up. Tickets for Saturday's concert featuring Kindred The Family Soul are $50 in advance, $65 at the door. For more information on registration, tickets and hotels, visit www.ministryofartsandculture.com or call 1-866-363-9985.