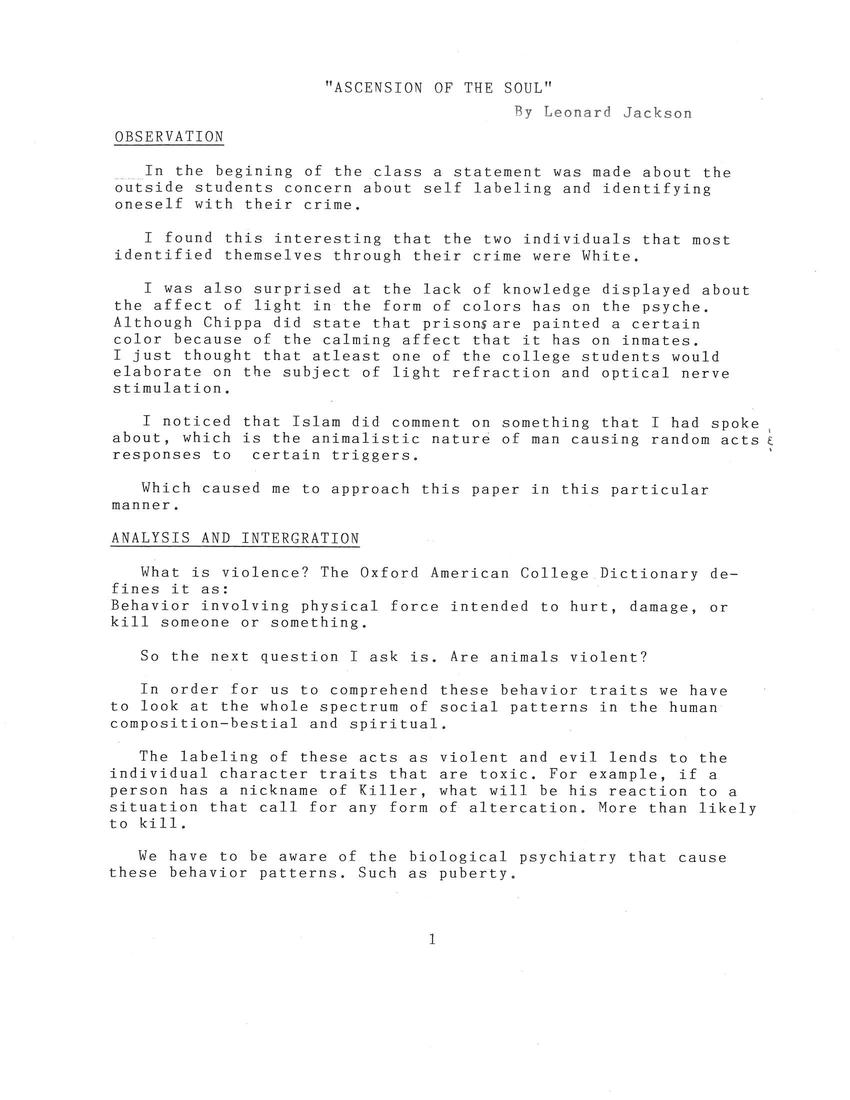 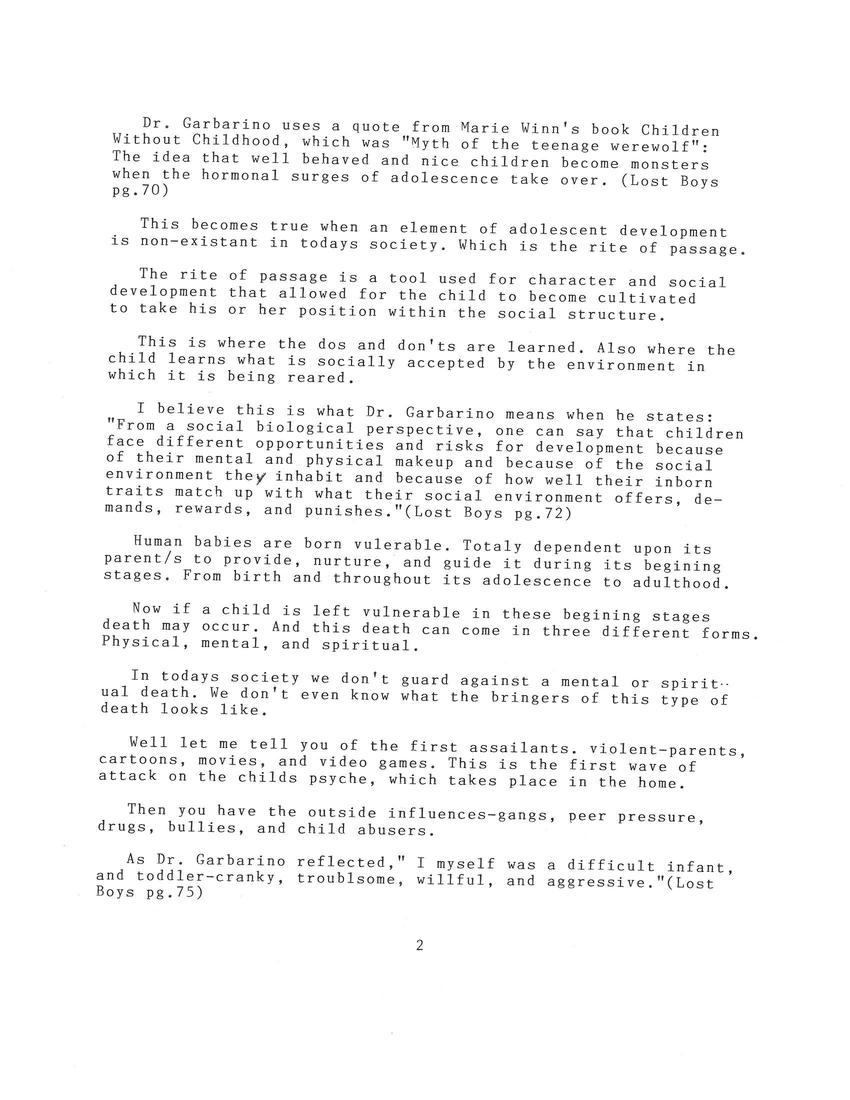 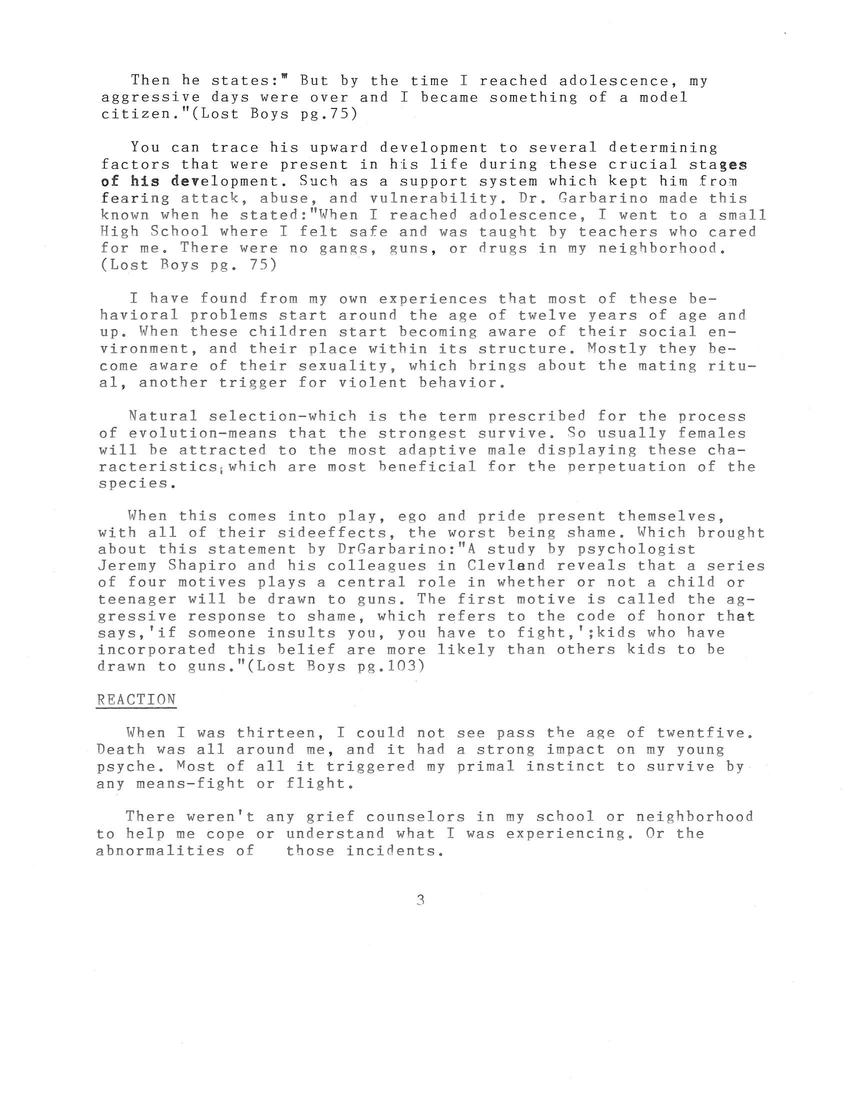 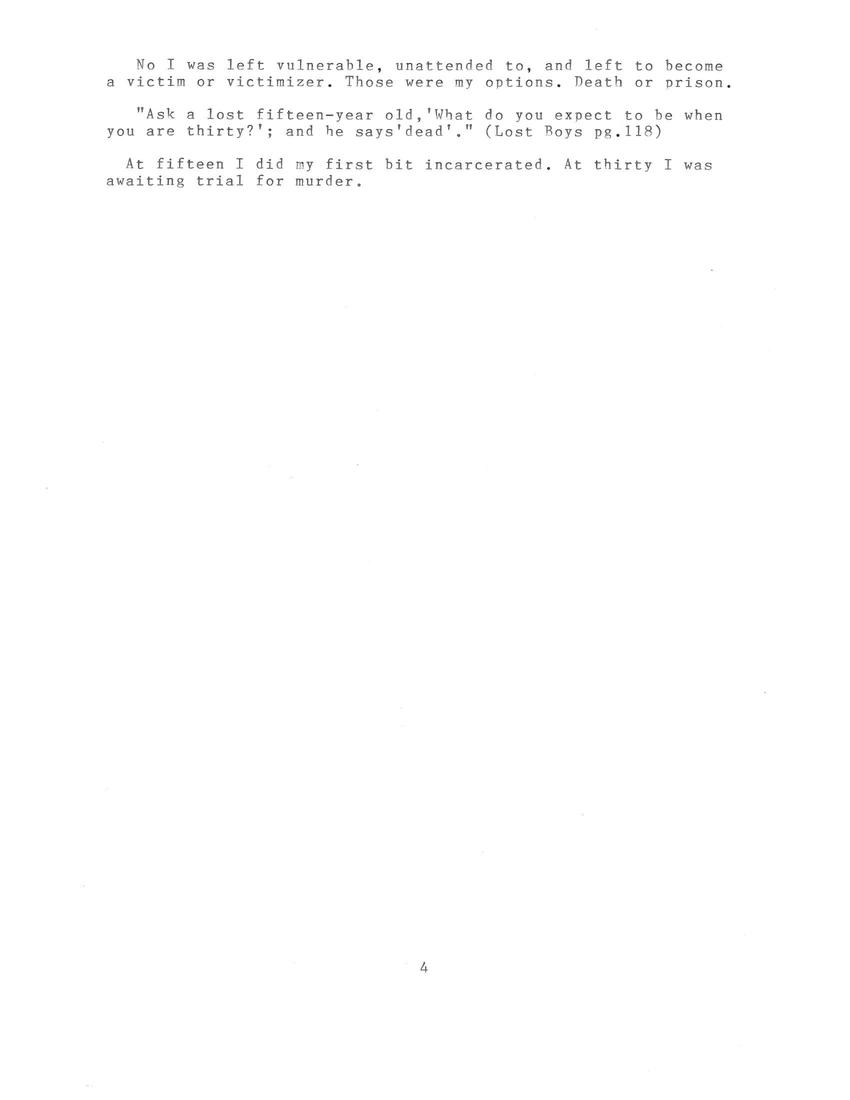 "ASCENSION OF THE SOUL"
By Leonard Jackson

In the beginning of the class a statement was made about the outside students' concern about self labeling and identifying oneself with their crime.

I found this interesting that the two individuals that most identified themselves through their crime were White.

I was also surprised at the lack of knowledge displayed about the effect of light in the form of colors has on the psyche. Although Chippa did state that prisons are painted a certain color because of the calming effect that it has on inmates. I just thought that at least one of the college students would elaborate on the subject of light refraction and optical nerve stimulation.

I noticed that Islam did comment on something that I had spoke about, which is the animalistic nature of man causing random acts & responses to certain triggers.

Which caused me to approach this paper in this particular manner.

What is violence? The Oxford American College Dictionary defines it as:
Behavior involving physical force instead to hurt, damage, or kill someone or something.

So the next question I ask is. Are animals violent?

In order for us to comprehend these behavior traits we have to look at the whole spectrum of social patterns in the human composition - bestial and spiritual.

The labeling of these acts as violent and evil lends to the individual character traits that are toxic. For example, if a person has a nickname of Killer, what will be his reaction to a situation that calls for any form of altercation. More than likely to kill.

We have to be aware of the biological psychiatry that causes these behavior patterns. Such as puberty.

Dr. Garbarino uses a quote from Marie Winn's book Children Without Childhood, which was "Myth of the teenage werewolf": The idea that well behaved and nice children become monsters when the hormonal surges of adolescence take over. (Lost Boys pg. 70)

This becomes true when an element of adolescent development is non-existent in today's society. Which is the rite of passage.

The rite of passage is a tool used for character and social development that allowed for the child to become cultivated to take his or her position within the social structure.

This is where the dos and don'ts are learned. Also where the child learns what is socially accepted by the environment in which it is being reared.

I believe this is what Dr. Garbarino means when he states: "From a social biological perspective, one can say that children face different opportunities and risks for development because of their mental and physical makeup and because of the social environment they inhabit and because of how well their inborn traits match up with what their social environment offers, demands, rewards, and punishes." (Lost Boys pg. 72)

Human babies are born vulnerable. Totally dependent upon its parent/s to provide, nurture, and guide it during its beginning stages. From birth and throughout its adolescence to adulthood.

Now if a child is left vulnerable in these beginning stages death may occur. And this death can come in three different forms. Physical, mental, and spiritual.

In today's society we don't guard against a mental or spiritual death. We don't even know what the bringers of this type of death looks like.

Well, let me tell you of the first assailants. Violent parents, cartoons, movies, and video games. This is the first wave of attack on the child's psyche, which takes place in the home.

Then you have the outside influences - gangs, peer pressure, drugs, bullies, and child abusers.

As Dr. Garbarino reflected, "I myself was a difficult infant, and toddler - cranky, troublesome, willful, and aggressive." (Lost Boys pg. 75)

Then he states: "But by the time I reached adolescences, my aggressive days were over and I became something of a model citizen." (Lost Boys pg. 75)

You can trace his upward development to several determining factors that were present in his life during these crucial stages of his development. Such as a support system which kept him from fearing attack, abuse, and vulnerability. Dr. Garbarino made this known when he stated: "When I reached adolescence, I went to a small High School where I felt safe and was taught by teachers who cared for me. There were no gangs, guns, or drugs in my neighborhood." (Lost Boys pg. 75)

I have found from my own experiences that most of these behavioral problems start around the age of twelve years of age and up. When these children start becoming aware of their social environment, and their place within its structure. Mostly they become aware of their sexuality, which brings about the mating ritual, another trigger for violent behavior.

Natural selection - which is the term prescribed for the process of evolution - means that the strongest survive. So usually females will be attracted to the most adaptive male displaying these characteristics, which are the most beneficial for the perpetuation of the species.

When this comes into play, ego and pride present themselves, with all of their side effects, the worst being shame. Which brought about this statement by Dr. Garbarino: "A study by psychologist Jeremy Shapiro and his colleges in Cleveland reveals that a series of four motives plays a central role in whether or not a child or teenager will be drawn to guns. The first motive is called the aggressive response to shame, which refers to the code of honor that says, 'if someone insults you, you have to fight'; kids who have incorporated this belief are more likely than other kids to be drawn to guns." (Lost Boys pg. 103)

When I was thirteen, I could not see past the age of twenty-five. Death was all around me, and it had a strong impact on my young psyche. Most of all it triggered my primal instinct to survive by any means - fight or flight.

There weren't any grief counselors in my school or neighborhood to help me cope or understand what I was experiencing. Or the abnormalities of those incidents.

No, I was left vulnerable, unattended to, and left to become a victim or victimizer. Those were my options. Death or prison.

At fifteen I did my first bit incarcerated. At thirty I was awaiting trial for murder.

Freedom- thanks for sharing this online. I would like to include this in the play I discussed with you previously.

You already gave permission to use something you spoke about in class.

I hope this is OK. Your writing and experiences are very powerful and will help educate others, to humanize those who are incarcerated, and to lead to justice and corrections reform.

thanks again for being a leader who is very articulate and an excellent writer.

Have a nice holiday.
"Shirley"
Freedom- one more thing, your posts have inspired me to read books by James Garabino and Marie Winn. 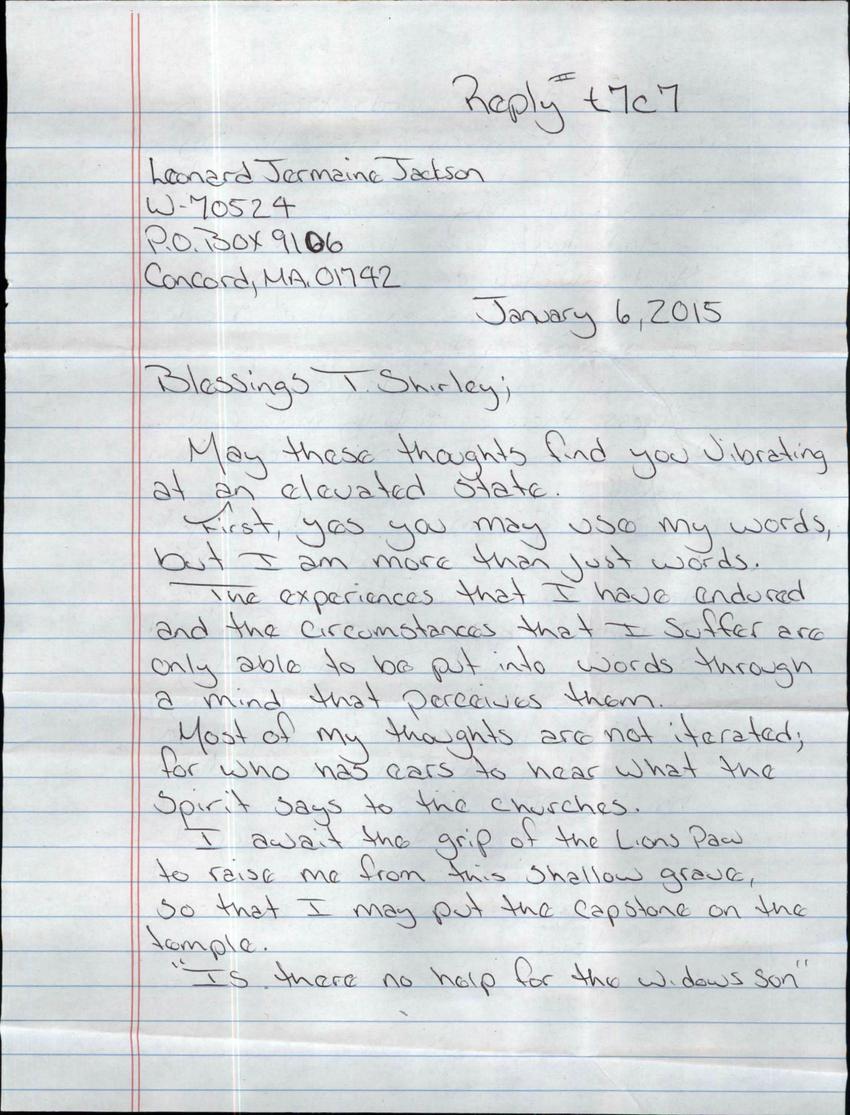 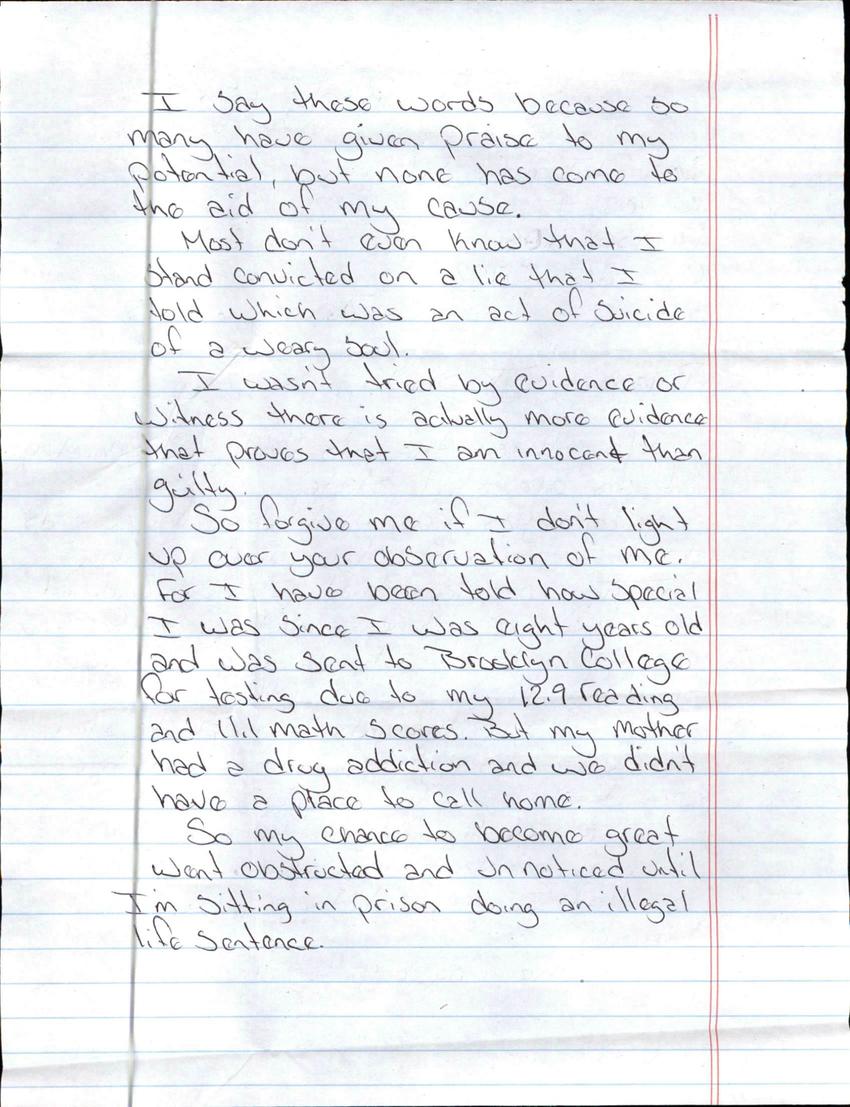 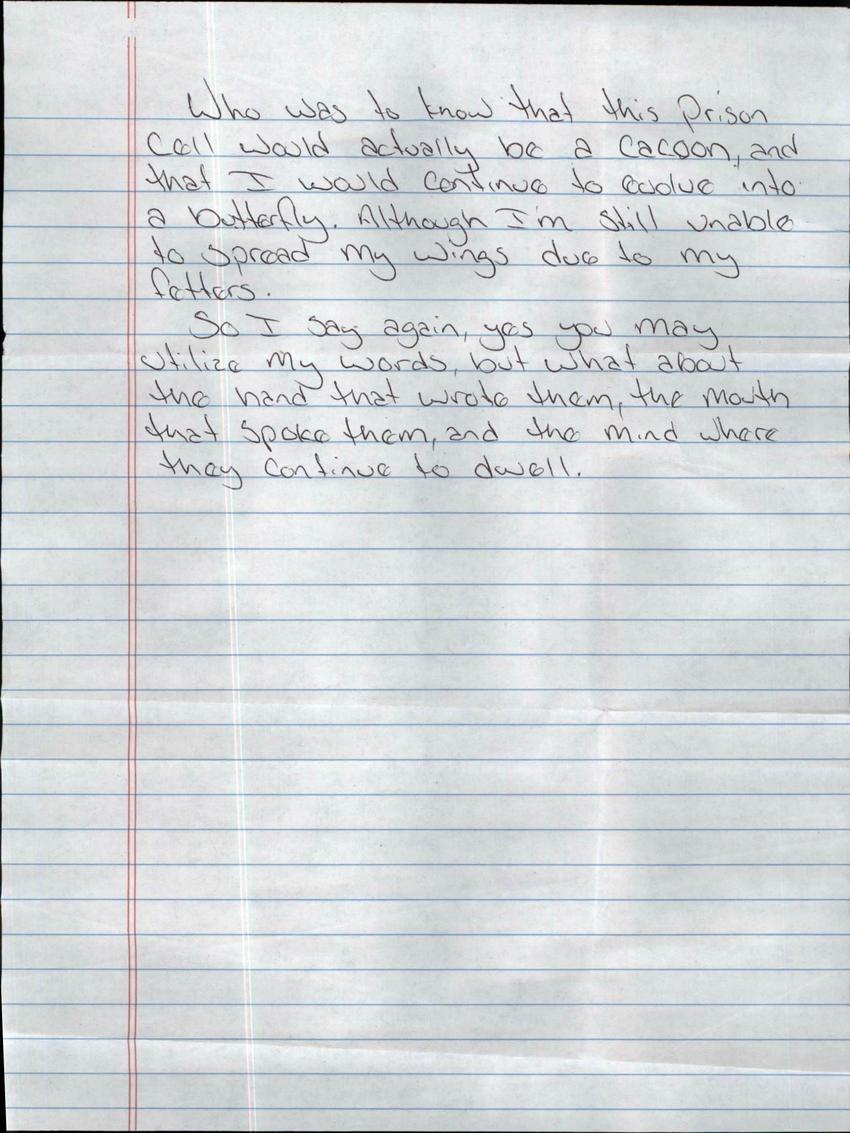 May these thoughts find you vibrating at an elevated state.
First, yes you may use my words, but I am more than just words.
The experiences that I have endured and the circumstances that I suffer are only able to be put into words though a mind that perceives them. Most of my thoughts are not iterated; for who has ears to hear what the spirit says to the churches.
I await the grip of the lions paw to raise me from this shallow grave, so that I may put the capstone on the temple.
“Is there no help for the widows son”
I say these words because so many have given praise to my potential, but none has come to the aid of my cause. Most don’t even know that I stand convicted on a lie that I told which was an act of suicide of a weary soul.
I wasn’t tried by evidence of witness there is actually more evidence that proves that I am innocent than guilty.
So forgive me if I don’t light up over your observation of me. For I have been told how special I was since I was eight years old and sent to Brooklyn College for testing due to my 12.9 reading and 11.1 math scores. But my mother has a drug addiction and we didn’t have a place to call home.
So my chance to become great went obstructed and unnoticed until I’m sitting in prison doing an illegal life sentence. Who was to know that this prison cell would actually be a cacoon, and that I would continue to evolve into a butterfly. Although I’m still unable to spread my wings due to my fetters.
So I say again, yes you may utilize my words, but what about the hand that wrote them, the mouth that spoke them, and the mind where they continue to dwell.
12/5/2014
William D. Linley ("David")
ID no. m-08788
Graham Correctional Center
P.O. Box 499
Hillsboro, Illinois 62049


Mitchel or Charlie,
Find enclosed a small donation for your ministry. I hope it is helpful. I’ve also enclosed a 3-pg letter as an update. I know it’s a round about way to submit a posting and I apologize in advance for any inconvenience. I’ve come to learn over the past 3-years that 50% of my updates with a similar content never reach the P.O. Box. I wonder if you ever received my suggestion about setting up a phone update process? It was last year when you were exploring the idea of charging a posting fee (monthly). I know I would be willing to pay for the certainty of free speech and unhindered access.
Anyway, a few of my trusted friends and I all feel that our nation is at a critical juncture, we are living in a moment which is the next phase of the civil rights movement. The events of history such as Revolutionary war, Civil War, Industrial Revolution, women’s rights
2
(Mitchel-Charlie Letter Cont.)
Movement, civil rights movement and the assassinations of MLK and Kennedy. What we do now, as a people, as a nation, will either turn our course back to being a model nation of justice and freedom -or-will quicken our decline as a relevant country in world history. It will unite us as a nation or will lead to our division which will open the door for our enemies to gain a real foothold here.
Submitting a voucher and using a different address increases the success of this reaching you. Please consider posting to my location. Using the normal process is always stopped for close review and only 50% (the happy, upbeat, positive views) ever reach the destination. Very frustrating.
Well, hope all is going well with your work, studies and ministry. Thank you for accepting my unusual route taken…
Sincerely,
William D. Linley