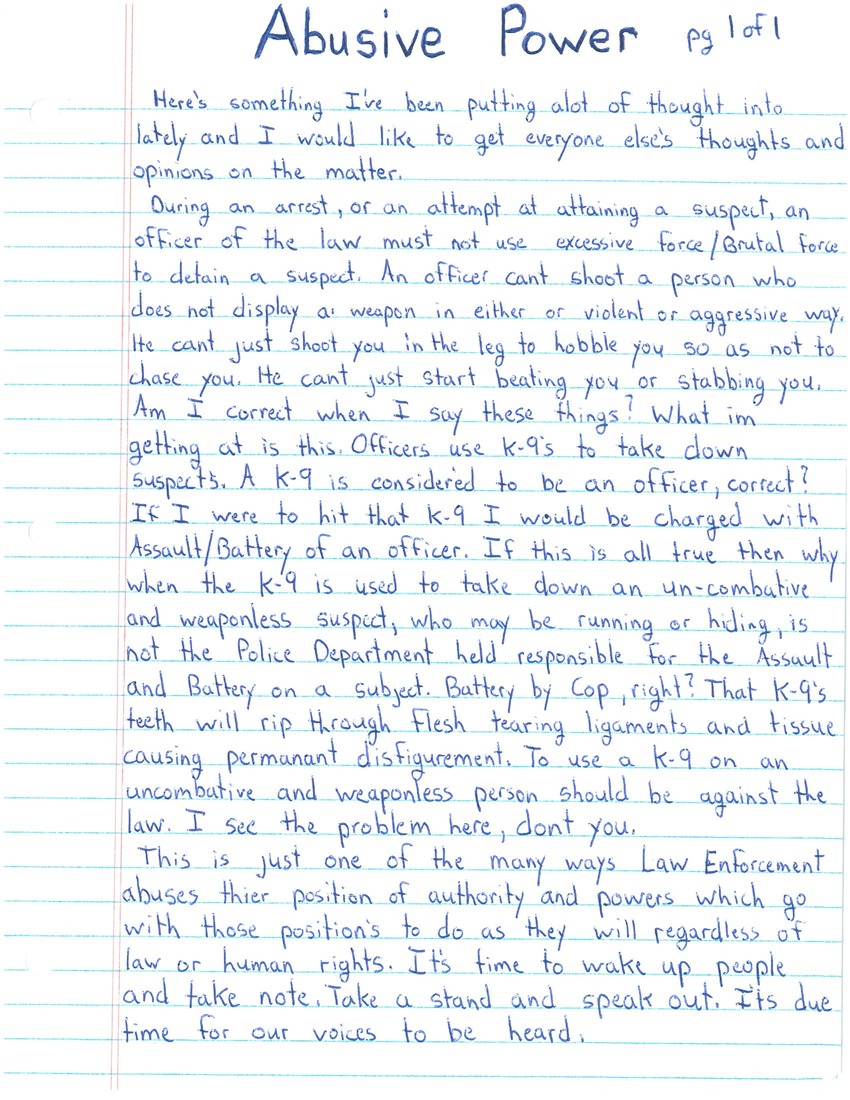 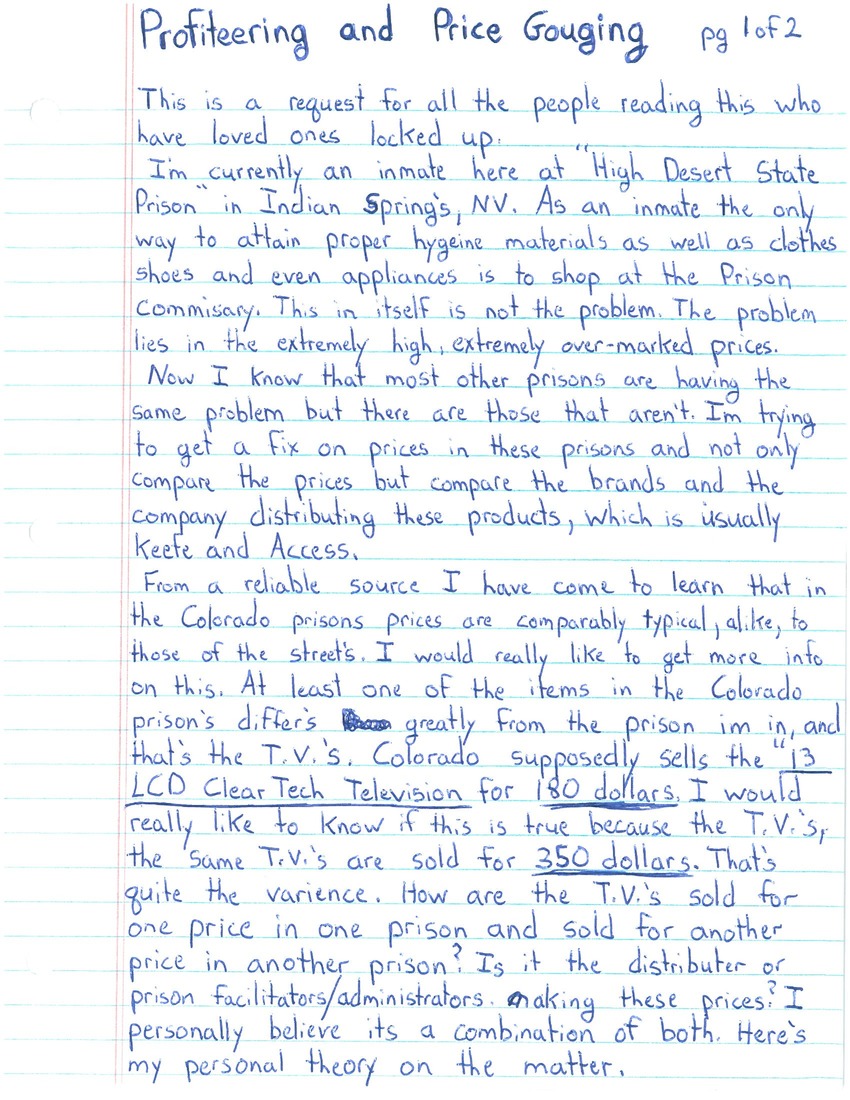 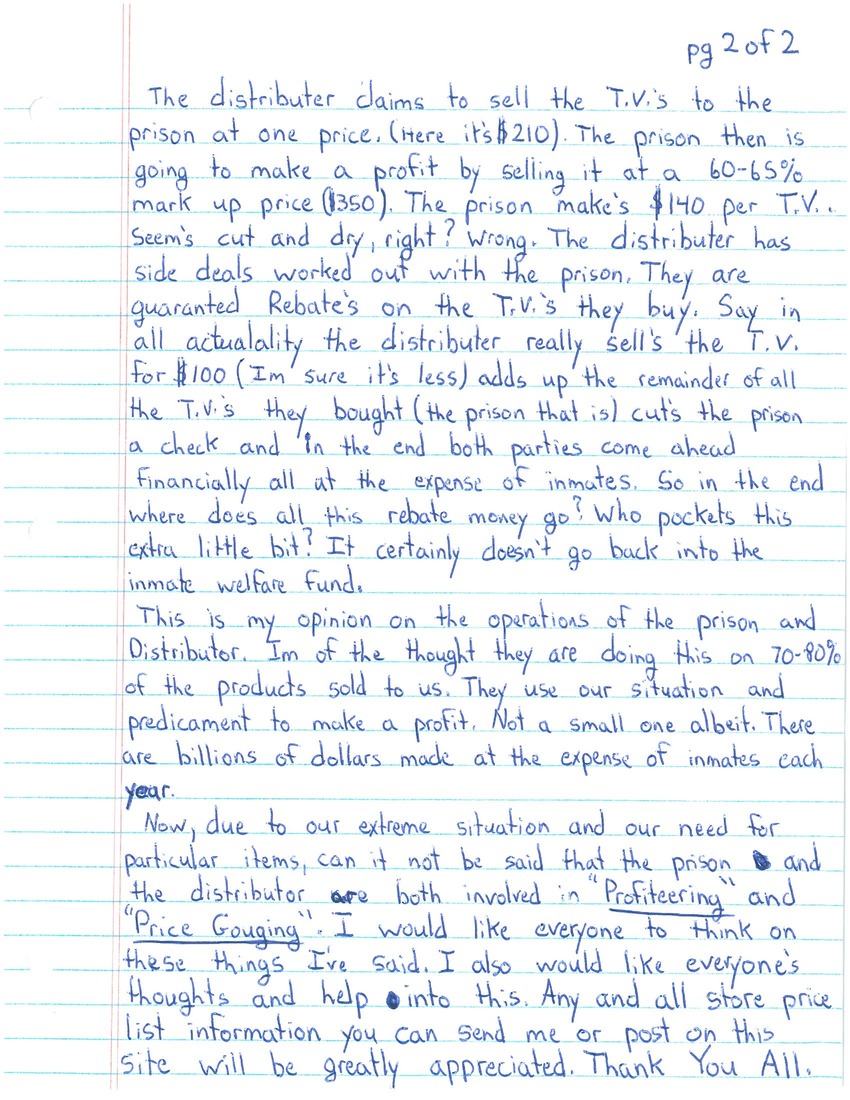 Abusive Power
Here's something I've been putting a lot of thought into lately, and I would like to get everyone else's thoughts and opinion on this matter.

During an arrest and an attempt of obtaining a suspect, an officer of the law must not use excessive force/brutal force to detain a suspect. An officer can't shoot a person who does not display a weapon in a violent or aggressive way. He can't just shoot you in the leg to hobble you so as not to chase you. He can't just start beating you or stabbing you. Am I correct when I say these things?

What I'm getting at is this: officers us K-9s to take down suspects. A K-9 is considered to be an officer, correct? If I were to hit that K-9, I would be charged with assault/battery of an officer. If this is all true, then why when the K-9 is used to take down an uncombative and weaponless suspect, who may be running or hiding, is not the police department held responsible for the assault and battery of a suspect? Battery by cop, right? That K-9's teeth will rip through flesh, tearing ligaments and tissue, causing paramount disfigurement. To use a K-9 on an uncombative and weaponless person should be against the law. I see the problem here; don't you?

This is just one of the many ways law enforcement abuses their position of authority and powers, which goes with those positions to do as they will, regardless of law or human rights. It's time to wake up, people, and take note. Take a stand and speak out. It's due time for our voices to be heard.

Profiteering and Price Gouging
This is a request for all the people reading this who have loved ones locked up.

I'm currently an inmate here at High Desert State Prison in Indian Springs, NV. As an inmate, the only way to attain proper hygiene materials—as well as clothes, shoes, and even appliances—is to shop at the prison commissary. This in itself is not the problem. The problem lies in the extremely high, over-marked prices.

Now I know that most other prisons are having the same problem, but there are those that aren't. I'm trying to get a fix on prices in these prisons and not only compare the prices, but compare the brands and the company distributing these products—which are usually Keete and Access.

From a reliable source, I have come to learn that in the Colorado prisons, prices are comparably typical, alike to those of the streets. I would really like to get more info on this. At least one of the items in the Colorado prisons differs greatly from the prison I'm in, and that's TVs. Colorado supposedly sells the 13" LCD ClearTech television for 180 dollars. I would really like to know if this is true, because the same TVs are sold for 350 dollars. That's quite the variance.

How are the TVs sold for one price in one prison, and sold for another in another prison? Is it the distributor or prison facilitators/administrators making these prices? I personally believe it's a combination of both.

Here's my personal theory on the matter: the distributor claims to sell the TVs to the prison at one price. Here, it's 210 dollars. The prison then is going to make profit by selling it at a 60-65% mark up price (350 dollars). The prison makes 140 dollars per TV. Seems cut and dry, right? Wrong. The distributor has side deals worked out with the prison. They are guaranteed rebates on the TVs they buy.

Say in all actuality the distributor really sells the TV for 100 dollars (I'm sure it's less), adds up the remainder of all the TVs they bought (the prison, that is), cuts the prison a check, and in the end, both parties come ahead financially, all at the expense of inmates. So in the end: where does all this rebate money go? Who pockets this extra little bit? It certainly doesn't go back into the inmate welfare fund.

This is my opinion on the operations of the prison and distributor. I'm of the opinion they are doing this on 70-80& of the products sold to us. They use our situation and predicament to make a profit. Not a small one albeit. There are billions of dollars made at the expense of inmate each year.

Now due to our extreme situation and our need for particular items, can it not be said that the prison and the distributor are both involved in profiteering and price gouging? I would like everyone to think on these things I've said. I also would like everyone's thoughts and help into this. Any and all store price list information you can send me or post on this site will be greatly appreciated. Thank you all.

t\You had asked about the tvs....the tvs in nh state prison are $200 per tv.... sounds to me like your prison is ripping you guys off