Blog From Within The Gulag 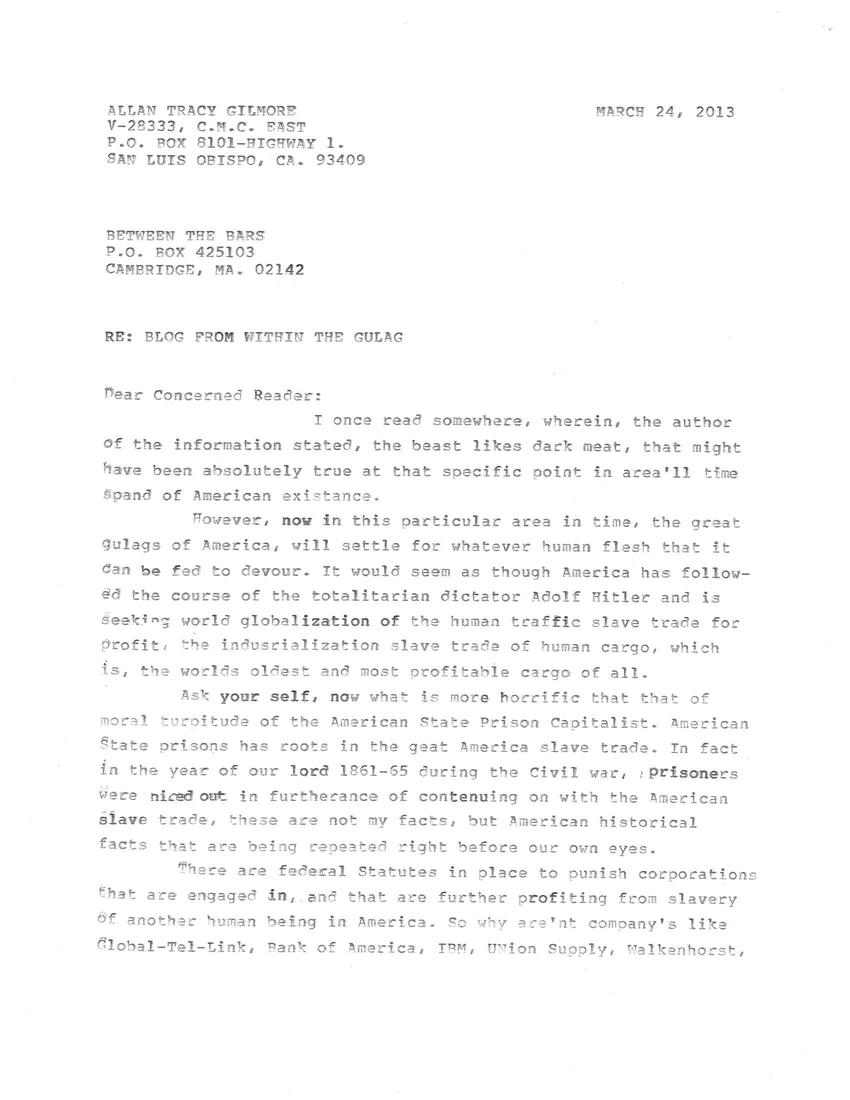 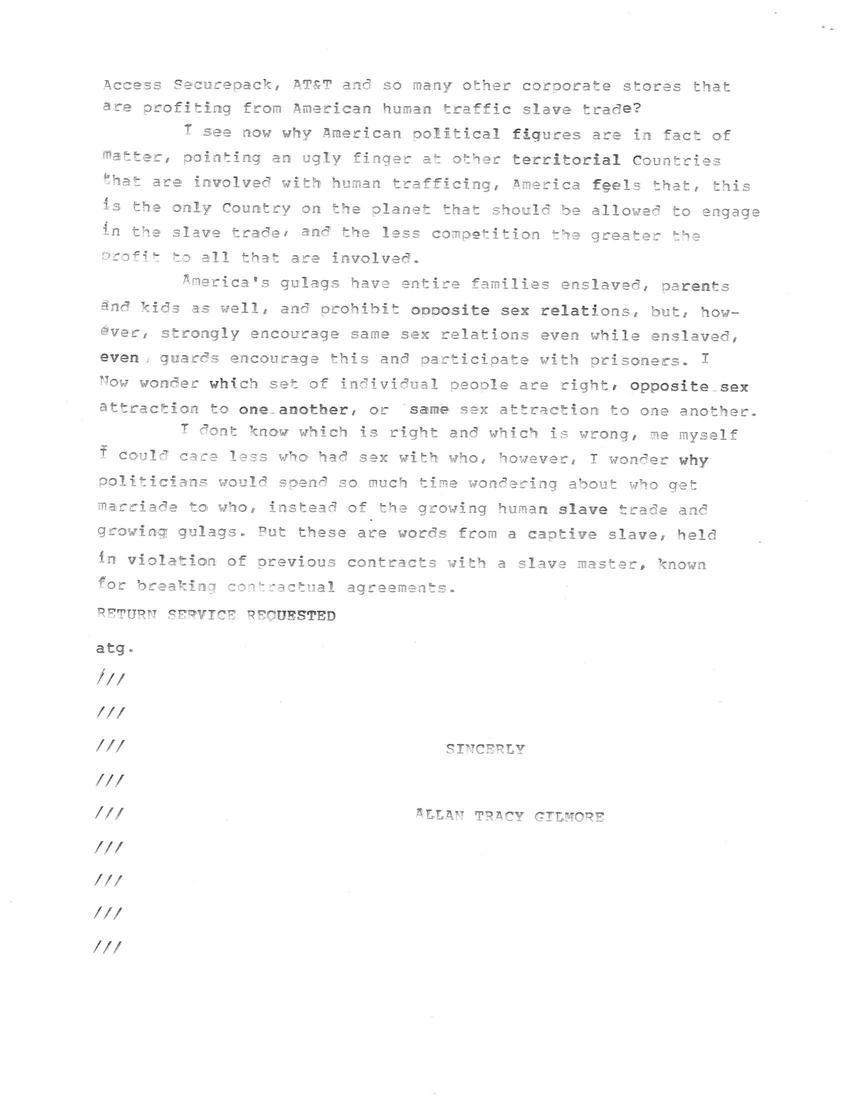 RE: BLOG FROM WITHING THE GULAG

Dear Concerned Reader:
I once read somewhere, wherein, the author of the information stated, the beast likes dark meat, that might have been absolutely true at the specific point in area'll time span of American existence.
However, now in this particular area in time, the great gulags of America, will settle for whatever human flesh that it can be fed to devour. It would seem as though America has followed the course of the totalitarian dictator Adolf Hitler and is seeking world globalization slave trade of human cargo, which is, the worlds oldest and most profitable cargo of all.
Ask yourself, now what is more horrific than that of moral turpitude of the American State Prison Capitalist. American State prisons has roots in the great American slave trade. In fact in the year of our lord 1861-65 during the Civil war, prisoners were hired out in futherance of continuing on with the American slave trade, these are not my facts, but American historical facts that are being repeated right before our eyes.
There are federal statutes in place to punish corporations that are engaged in, and that are further profiting from slavery of another human being in America. So why aren't companies like Global-Tel-Link, Bank of America, IBM, Union Supply, Walkenhorst, Access Securepack, AT&T and so many other corporate stores that are profiting from American human traffic slave trade?
I see now why American political figures are in fact of matter, pointing an ugly finger at other territorial countries that are involved with human trafficking, Americal feels that, this is the only country on the planet that should be allowed to engage in the slave trade, and the less competition the greater the profit to all that are involved.
America's gulags have entire families enslaved, even guards encourage this and participate with prisoners. I now wonder which set of individual people are right, opposite sex attraction to one another, or same sex attraction to one another.
I don't know which is right and which is wrong, me myself I could care less who had sex with who, however, I wonder why politicians would spend so much time wondering about who can get married to who, instead of the growing human slave trade and growing gulags. But these are words from a captive slave, held in violation of previous contracts with a slave master, known for breaking contractual agreements.
RETURN SERVICE REQUESTED
SINCERELY
ALLAN TRACY GILMORE

you have my sincere sympathy for being in the "system", solely for profit.. There are some who are a danger to society, but most who are incarcerated are not and should be released. I am sorry to say my son is one of the unfortunate ones who was persecuted and not prosecuted by the federal justice system for a first time offense of drug conspiracy.. He had most, if not all, of his rights violated and trampled on in the process.. He has served 10 years of a 30 year sentence based on lies, exaggerations and fabrications of the investigator who was hired by his former Partners because he became addicted to his product he was selling for them.. they were the kingpins, but he sat quietly by and let them off the hook while they "estimated" what he had sold over the years.. Not actual weights,but estimated! I am very upset that he is serving this enormous sentence while his lawyer of 15 years and his mentor and partner/teacher only got 3 years..it was his second offense for drugs, but the first was state so he got off light due to connections and payola to the right people.. I hope there is such a thing as Karma and they reap what they have sown..Using the legal system for a personal vendetta is a crime in itself..I keep you in my prayers and pray God brings you his peace.. Sincerely, Randy's Mom
Please post this reply typed above
(scanned reply – view as blog post)
uploaded May 14, 2013.  Original (PDF) 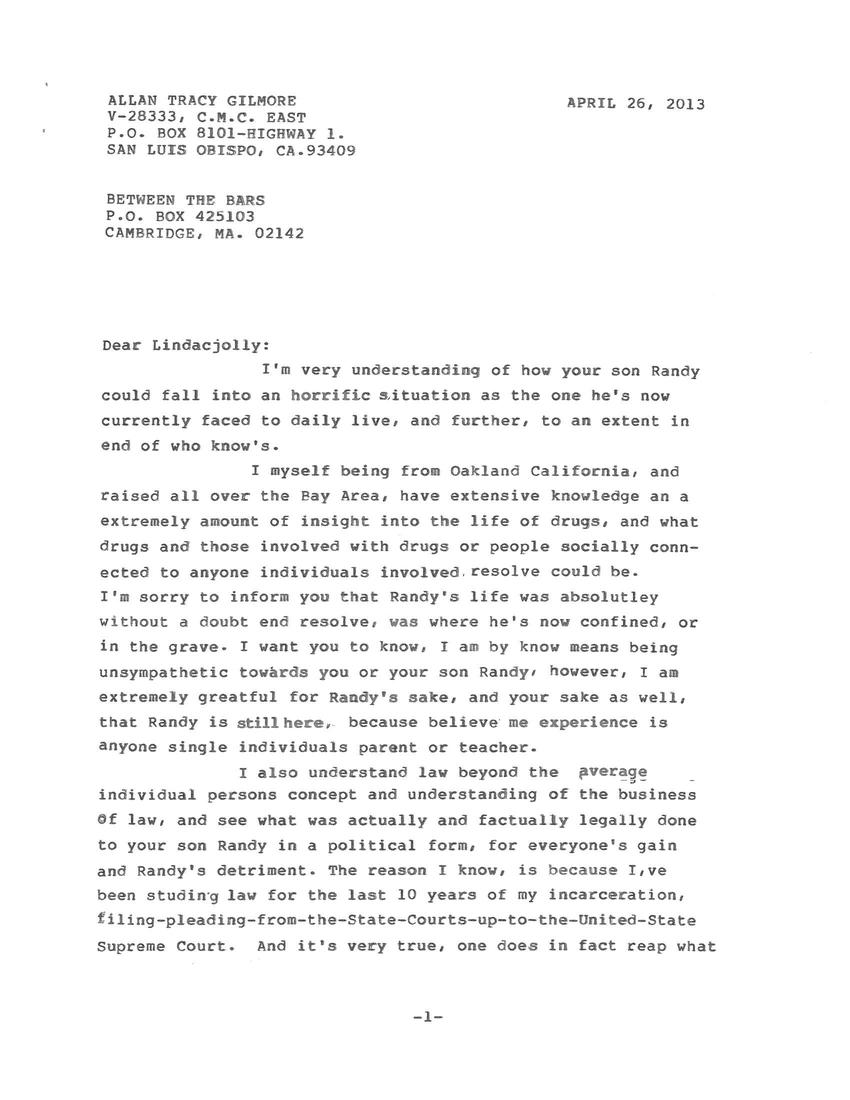 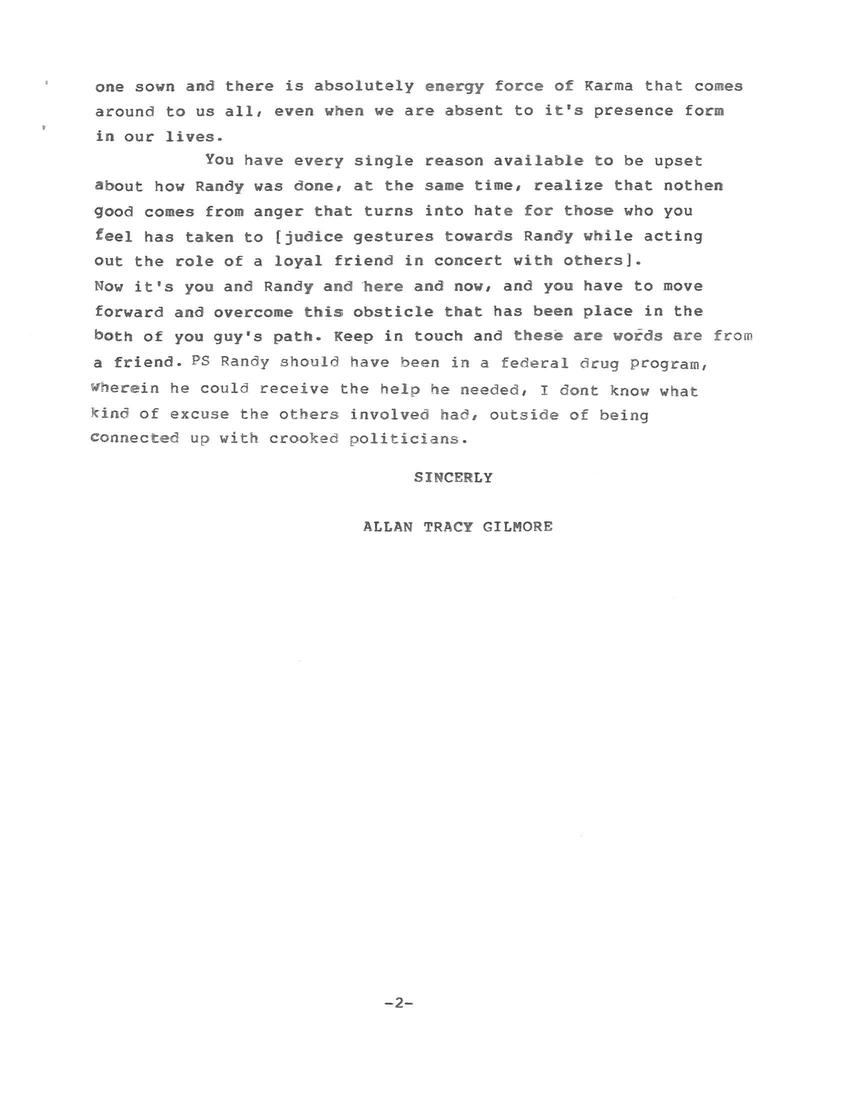 Thank you for your reply. You are correct in your statement of moving forward and not allowing hate to ruin or overcome your life. That's easier said than done when the injustice has destroyed a family, but we also know life is 90% what happens to you not in your control and 10% how one reacts to those actions. With that said, I realize my son and I both have work to overcome feelings of hate and hostility toward the corrupt system and people who instigated this injustice.

I will print your comments and mail to Randy so he can read and hopefully it will help him come to grips with being more positive. I maintain this is only temporary and relief will come. I pray every day that God will touch the hearts of those involved and correct this sentence to what it was supposed to be: 8 to 12 years.. Thank you again for taking time to respond to my comment to your letter.
Sincerely, 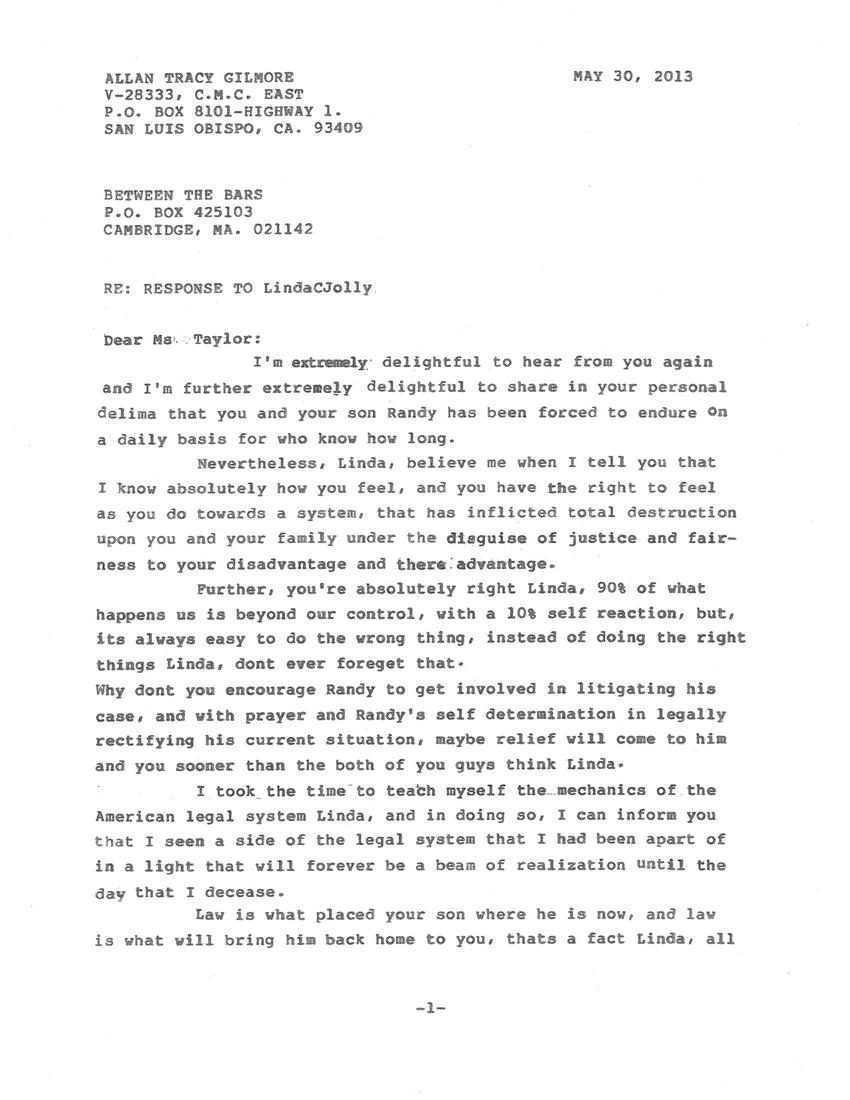 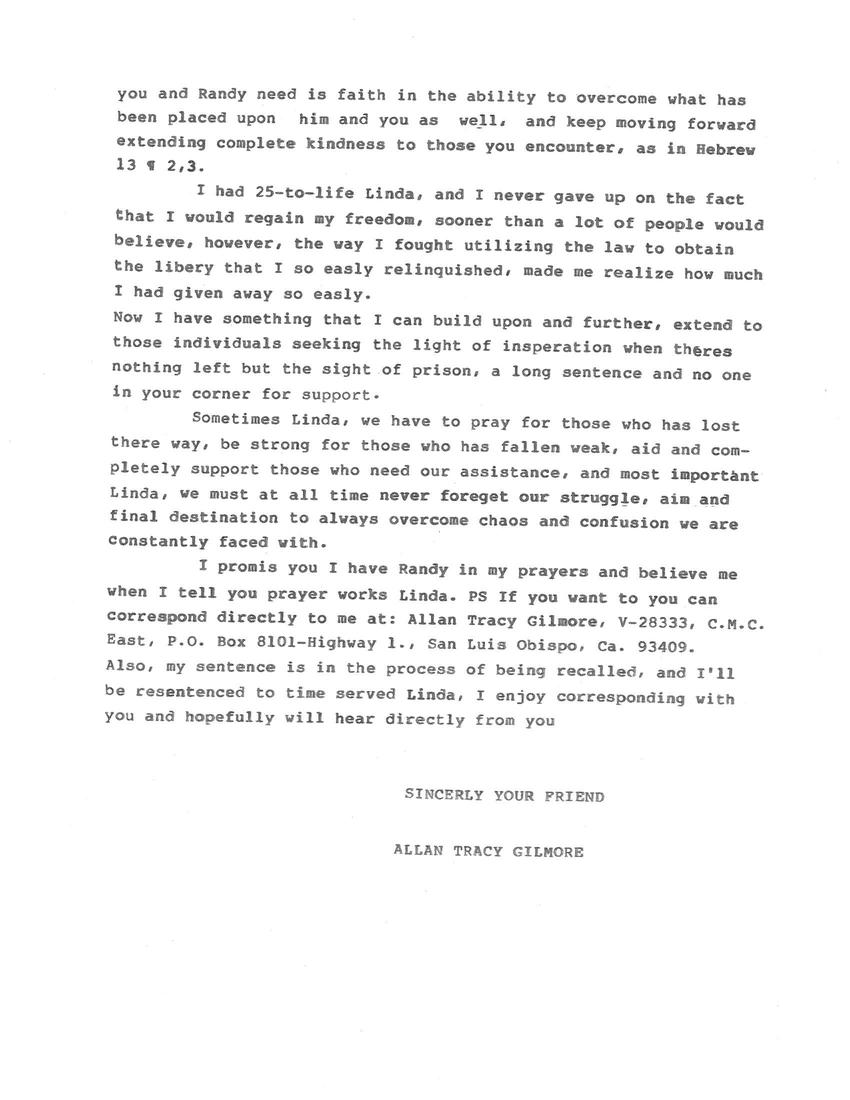 I'm happy to hear you will be getting a new sentence soon. Sounds like you've done your homework and then some.

I've always heard if we learn from our mistakes, then our suffering was not in vain. My son was in the law library a lot and did all his appeals up to and including the Supreme Court, but when it was denied it took the wind out of his sails.

I have been working the past 3 years diligently to get his sentence reduced and did get the prosecutor to agree to a reduction w/3rd party cooperation. However, I've had numerous information/tips give the govt., and so far they either dismiss them, say they are not beneficial to the govt., and now the fbi agent we were working with has stopped returning our phone calls and emails several months ago. I think they just wanted to pacify us but did not intend to rectify their abuse of the "justice" system.. What a joke to call it that as my most recent lawyer told me matter of fact, the almighty dollar is the only justice you can expect when dealing with the legal system. He wanted another $15K after we paid him $5K and he said he would help. Help he did, he opened our eyes to what a greedy little worm he is and I finally fired him and told him I would continue to search for help. In his final email, he stated, Hopefully, Randy will eventually get an appropriate sentence. I wrote him back and thanked him for putting in writing the case in a nutshell. "Appropriate sentence" because the one he now has the time does not fit the crime. Haven't heard from him since. I'm now looking for an out of state lawyer that will agree to help deliver a motion to the court that will rectify this sentence and not just take our $$.

I'm considering typing the motion myself and submitting it to the court. I have several outlines of what is required to submit motions and I have a copy of all my son's legal work, except his discovery which I was never allowed to see and he only got to read a small portion of it. When we asked to see the rest of it, the lawyer said it was turned back into the District Attorney and was sealed. They are hiding a lot of things and we feel we have the right to know what and who they are protecting since my son and I are being punished because of their corruption. There were a lot of lawyers, sheriffs, and federal investigators involved in this case and I know it was bought and sold. My son now feels very frustrated and depressed for trusting the people who were his partners that sold him out.

Anyway, I wish you the best and hope to hear soon you have in writing "Time Served".. 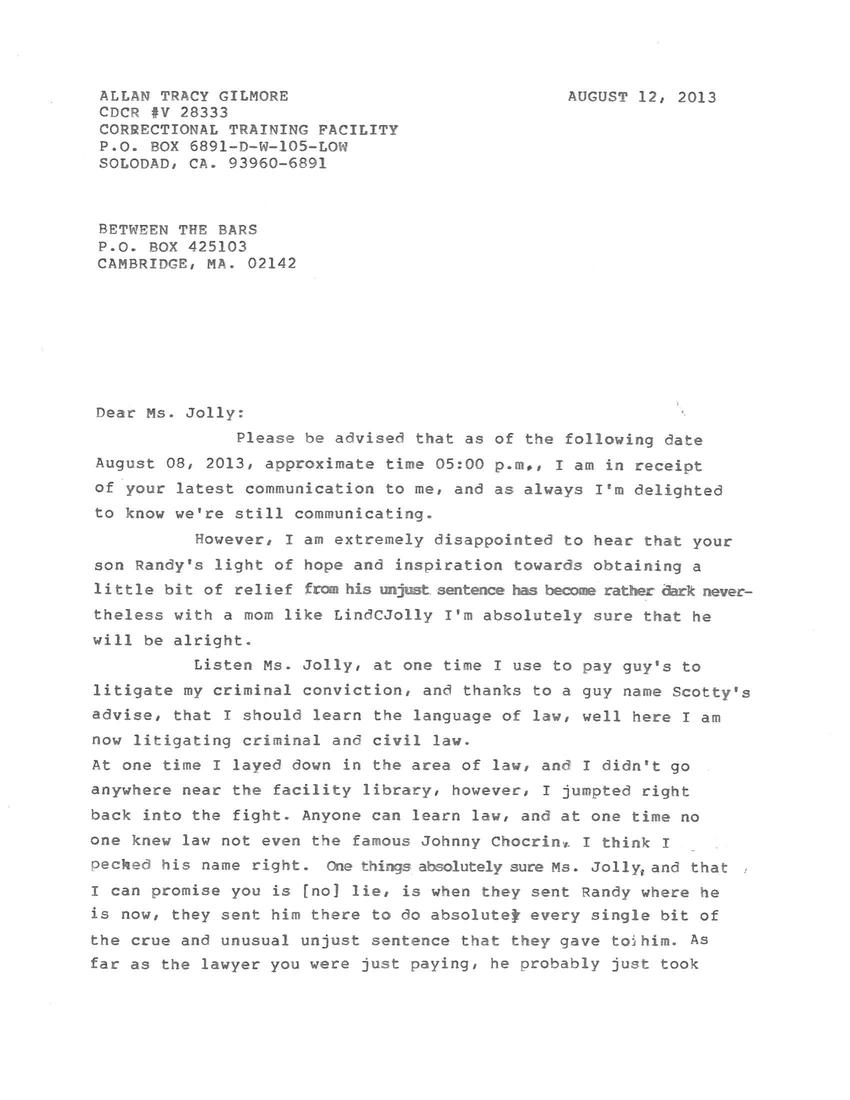 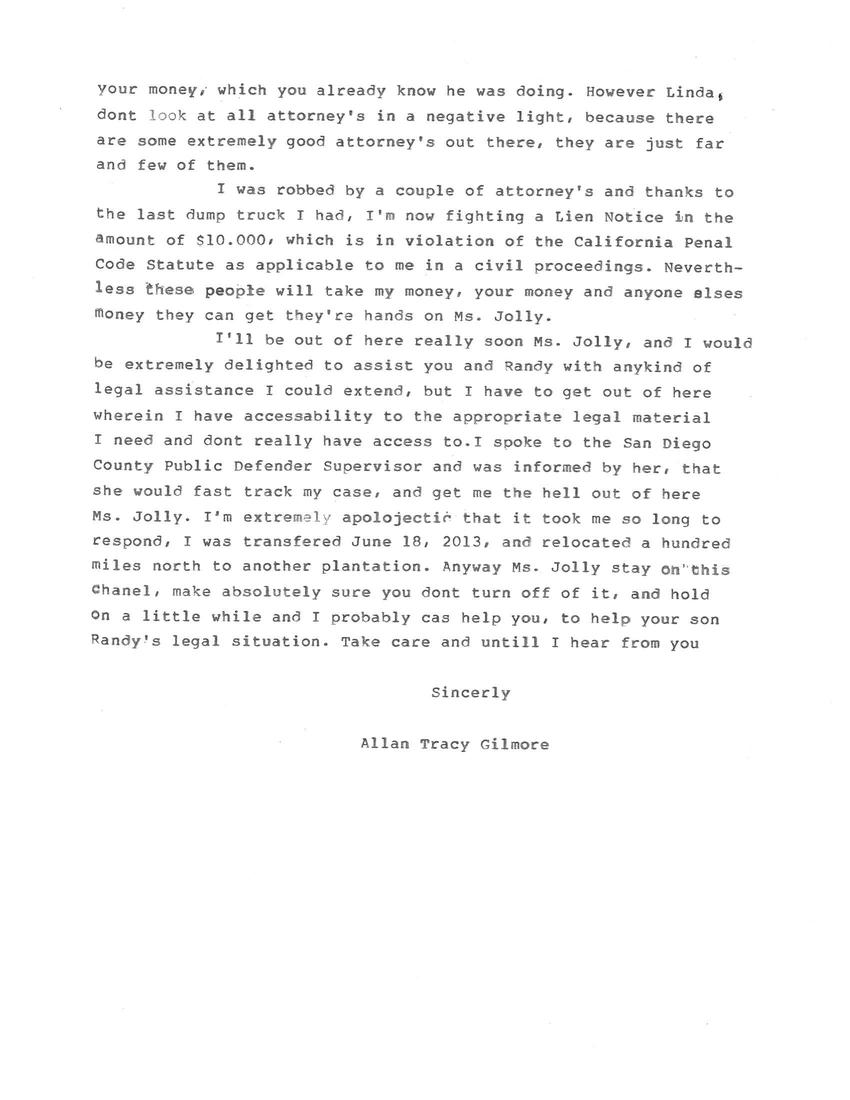