My Own Brother's Keeper 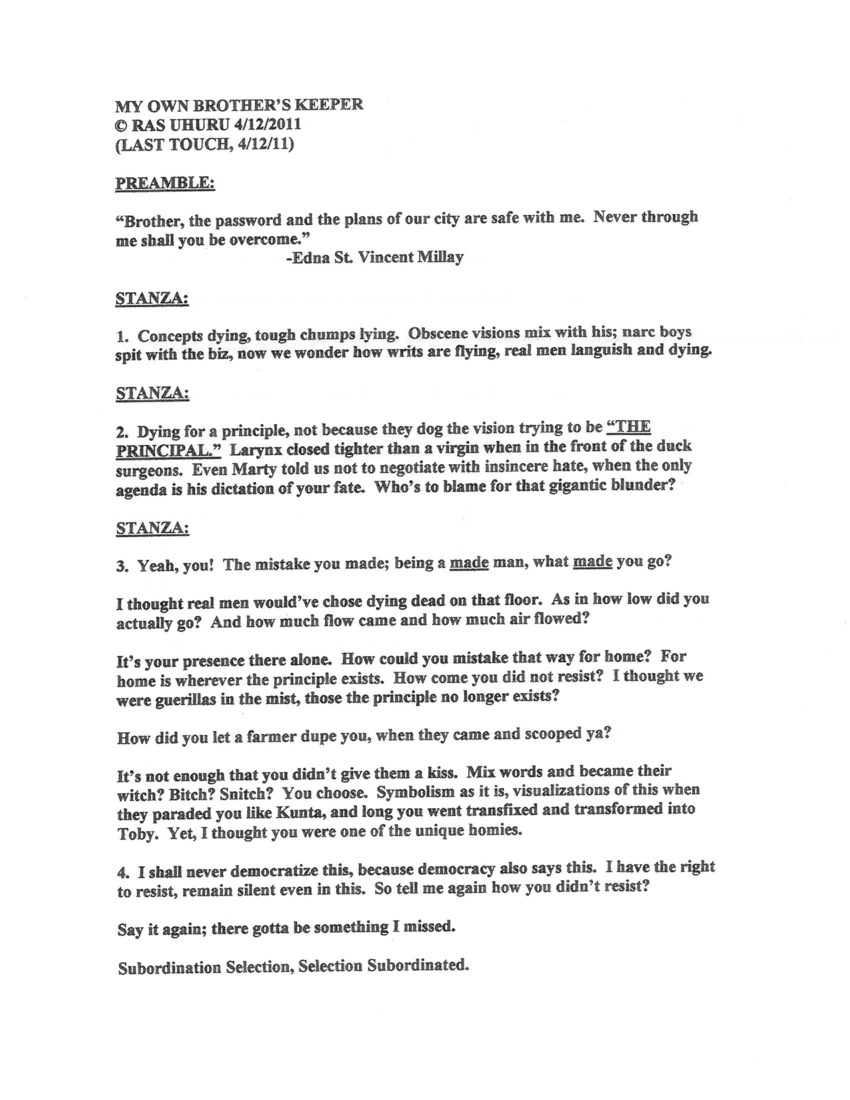 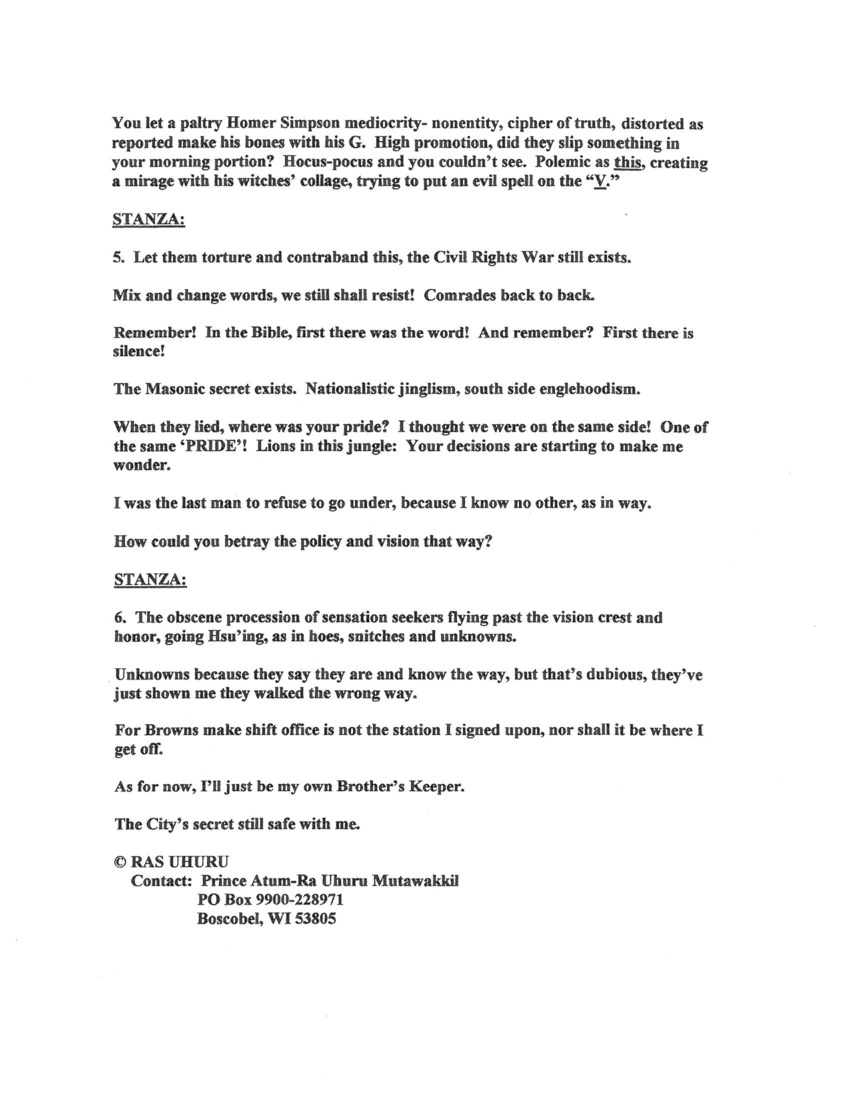 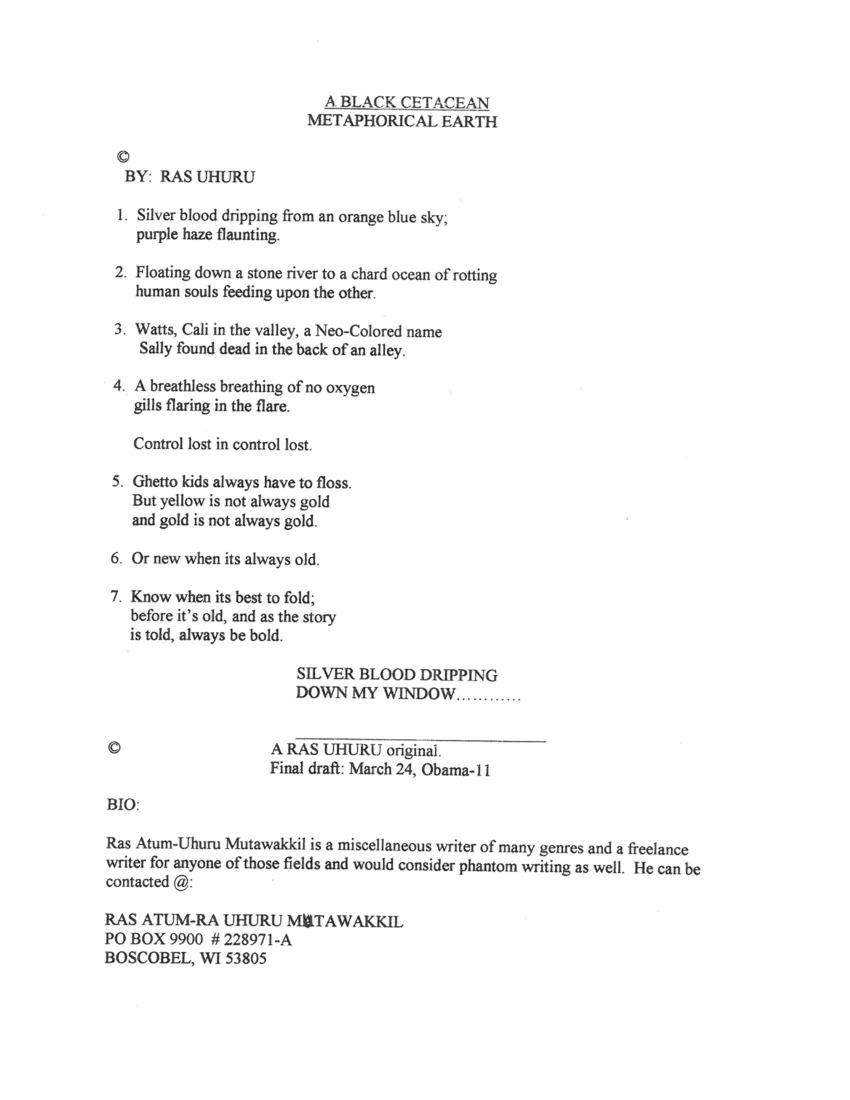 "Brother, the password and the plans of our city are safe with me. Never through me shall you be overcome."
-Edna St. Vincent Millay

2. Dying for a principle, not because they dog the vision trying to be "THE PRINCIPAL." Larynx closed tighter than a virgin when in the front of the duck surgeons. Even Marty told us not to negotiate with insincere hate, when the only agenda is his dictation of your fate. Who's to blame for that gigantic blunder?

3. Yeah, you! The mistake you made; being a made man, what made you go?

I thought real men would've chose dying dead on that floor. As in how low did you actually go? And how much flow came and how much air flowed?

It's your presence there alone. How could you mistake that way for home? For home is wherever the principle exists. How come you did not resist? I thought we were guerrillas in the mist, those the principle no longer exists?

How did you let a farmer dupe you, when they came and scooped ya?

It's not enough that you didn't give them a kiss. Mix words and became their witch? Bitch? Snitch? You choose. Symbolism as it is, visualization of this when they paraded you like Kunta, and long you went transfixed and transformed into Toby. Yet, I thought you were one of the unique homies.

4. I shall never democratize this, because democracy also says this. I have the right to resist, remain silent even in this. So tell me again how you didn't resist?

Say it again; there gotta be something I missed.

You let a paltry Homer Simpson mediocrity - nonentity, cipher of truth, distorted as reported make his bones with his G. High promotion, did they slip something in your morning potion? Hocus-pocus and you couldn't see. Polemic as this, creating a mirage with his witches' collage, trying to put an evil spell of the "V."

5. Let them torture and contraband this, the Civil Rights War still exists.

Mix and change words, we still shall resist! Comrades back to back.

Remember! In the Bible, first there was a word! And remember? First there is silence!

When they lied, where was your pride? I thought we were on the same side! One of the same 'PRIDE'! Lions in this jungle: Your decisions are starting to make me wonder.

I was the last man to refuse to go under, because I know no other, as in way.

How could you betray the policy and vision that way?

6. The obscene procession of sensation seekers flying past the vision crest and honor, going Hsu'ing, as in hoes, snitches and unknowns.

Unknowns because they say they are and know the way, but that's dubious, they've just shown me they walked the wrong way.

For Browns make shift office is not the station I signed upon, nor shall it be where I get off.

As for now, I'll just be my own Brother's Keeper.

The City's secret still safe with me.

2. Floating down a stone river to a chard ocean of rotting
human souls feeding upon the other.

3. Watts, Cali in the valley, a Neo-Colored name
Sally found dead in the back of an alley.

4. A breathless breathing of no oxygen
gills flaring in the flare.

6. Or new when its always old.

7. Know when its best to fold;
before it's old, and as the story
is told, always be bold.

Ras Atum-Uhuru Mutawakkil is a miscellaneous writer of many genres and a freelance writer for anyone of those fields and would consider phantom writing as well. He can be contacted @: