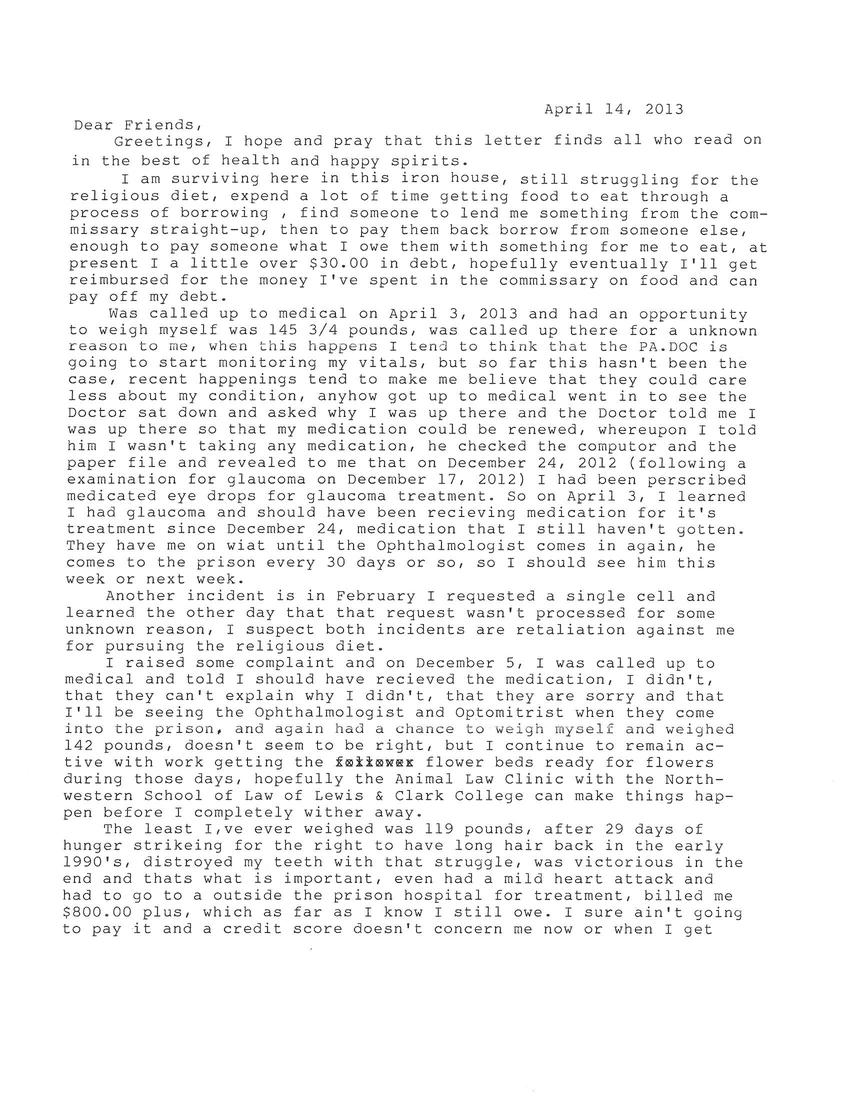 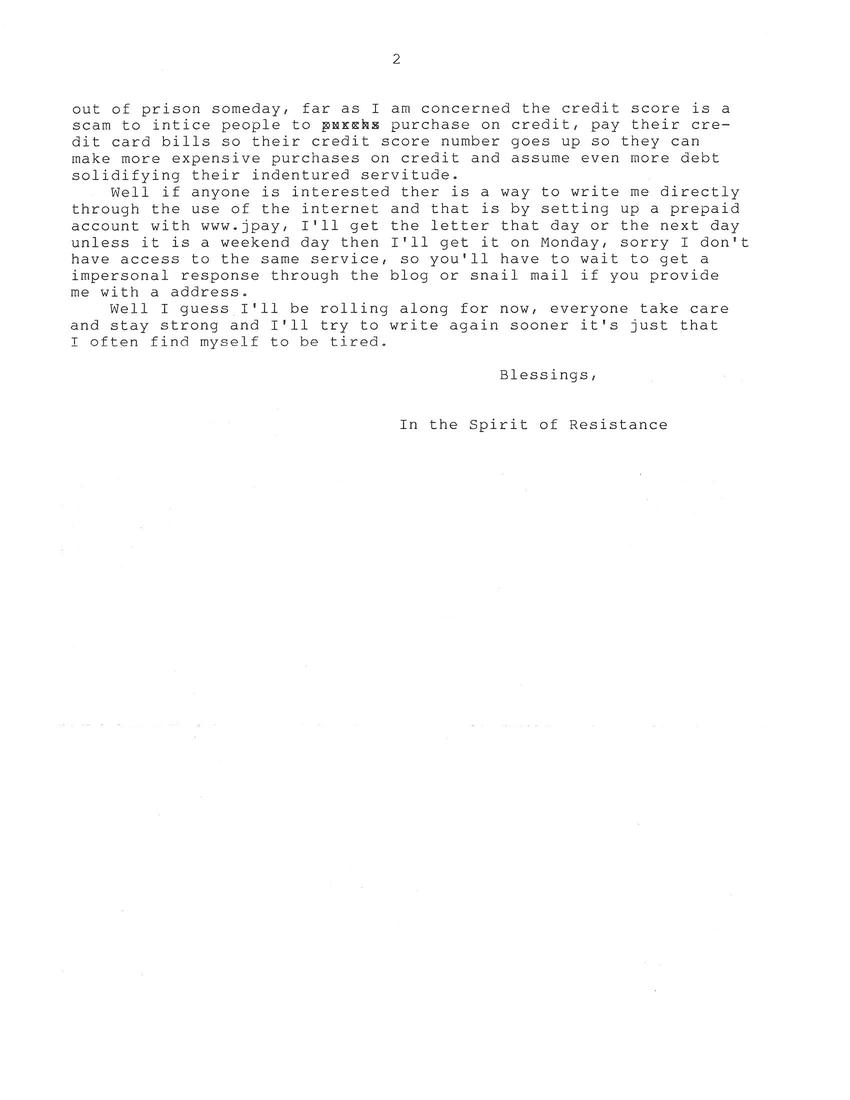 April 14, 2013
Dear Friends,
Greetings, I hope and pray that this letter finds all who read on in the best of health and happy spirits.
I am surviving here in this iron house, still struggling for the religious diet, expend a lot of time getting food to eat through the process of borrowing, find someone to lend me something from the commissary straight-up, then to pay them back borrow from someone else, enough to pay someone what I owe them with something for me to eat, at present I am a little over $30.00 in debt, hopefully eventually I'll get reimbursed for the money I've spent in the commissary on food and can pay off my debt.
Was called up to medical on April 3, 2013 and had an opportunity to weigh myself, was 145 3/4 pounds, was called up there for unknown reason to me, when this happens I tend to think that the PA.DOC is going to start monitoring my vitals, but so far this hasn't been the case, recent happenings tend to make me believe that they could care less about my condition, anyhow got up to medical went in to see the Doctor, sat down, and asked why I was up there, and the Doctor told me I was up there so that my medication could be renewed, whereupon I told him I wasn't taking any medication. He checked the computer and the paper file and revealed to me that on December 24, 2012 (following an examination for glaucoma on December 17,2012) I had been prescribed medicated eye drops for glaucoma treatment. So on April 3, I learned I had glaucoma and should have been receiving medication for it's treatment since December 24, medication that I still haven't gotten. They have me on wait until the Ophthalmologist comes in again, he comes to the prison every 30 days or so, so I should see him this week or next week.
Another incident is in February I requested a single cell and learned the other day that that request wasn't processed for some unknown reason, I suspect both incidents are retaliation against me for pursuing the religious diet.
I raised some complaint and on December 5, I was called up to medical and told I should have received the medication, I didn't, that they can't explain why I didn't, that they are sorry and that I'll be seeing the Ophthalmologist and Optometrist when they come into the prison, and again had a chance to weigh myself and weighed 42 pounds, doesn't seem to be right, I continue to remain active with work getting the flower beds ready for flowers during those days, hopefully the Animal Law Clinic with the Northwester School of Law of Lewis & Clark College can make things happen before I completely wither away.
The leave I've ever weighed was 119 pounds, after 29 days of hunger striking for the right to have long hair back in the early 1990's, destroyed my teeth with that struggle, was victorious in the end and that's what is important, even had a mild heart attack and had to go outside the prison hospital for treatment, billed me $800.00 plus, which as far as I know I still owe. I sure ain't going to pay it and a credit score doesn't concern me now or when I get [page 2] out of prison someday, far as I am concerned the credit score is a scam to entice people to purchase on credit, pay their credit card bills so their credit score number goes up so they can make more expensive purchases on credit and assume even more debt solidifying their indentured servitude.
Well if anyone is interested there is a way to write to me directly through the use of the internet and that is by setting up a prepaid account with www.jpay, I'll get the letter that day or the next day, unless it is a weekend day then I'll get it on Monday, sorry I don't have access to the same service, so you'll have to wait to get a impersonal response through the blog or snail mail if your provide me with an address.
Well I guess I'll be rolling along for now, everyone take care and stay strong and I'll try to write again sooner, it's just that I often find myself to be tired.
Blessings,
In the Spirit or Resistance