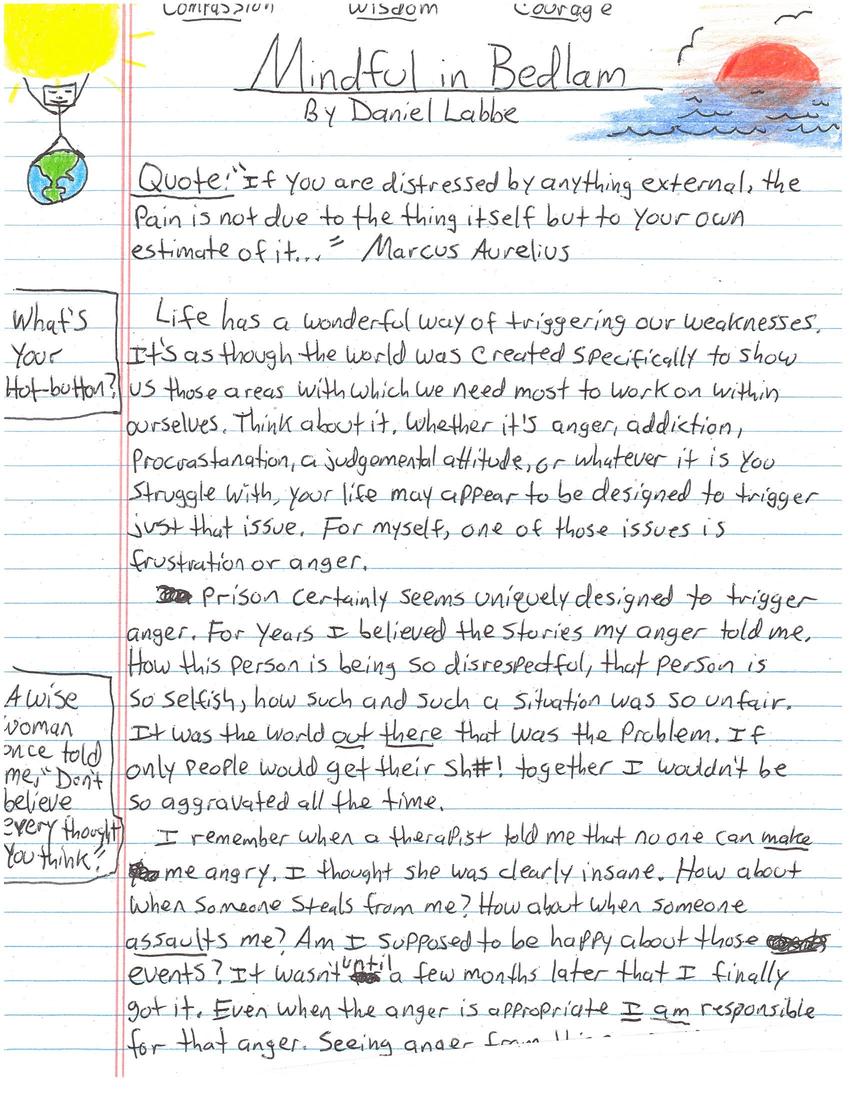 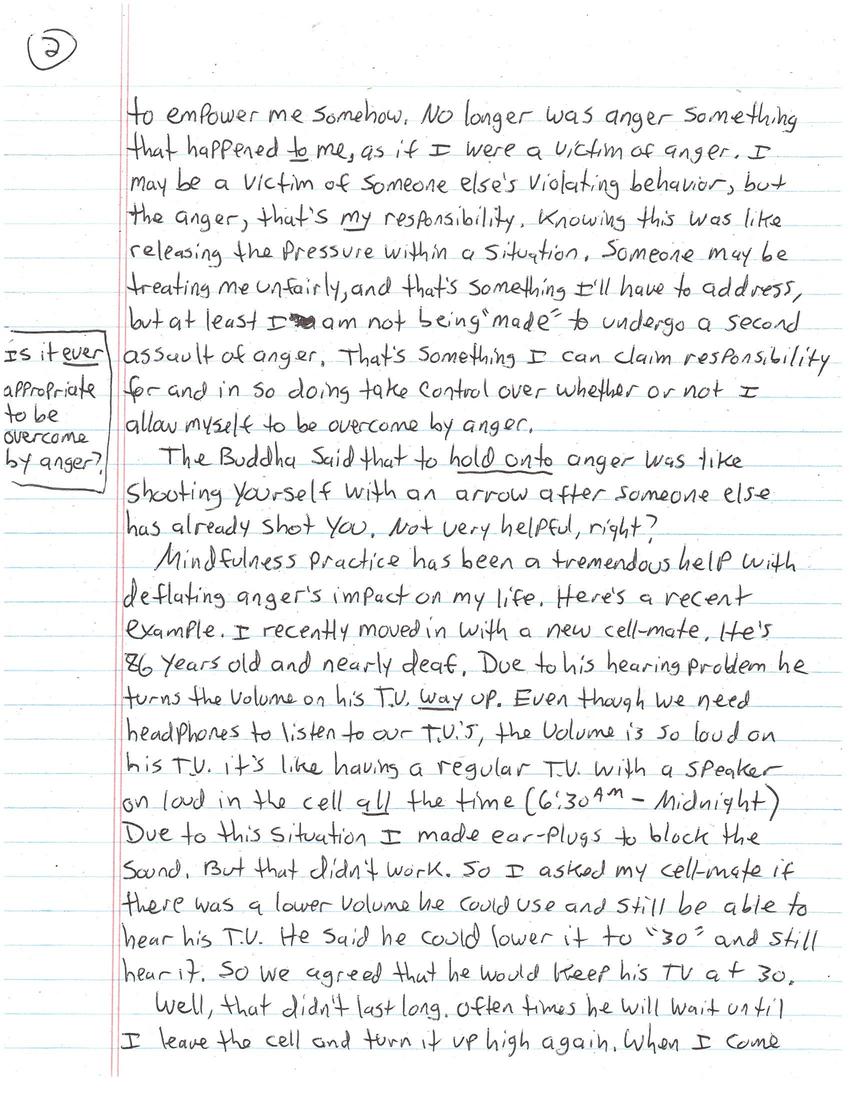 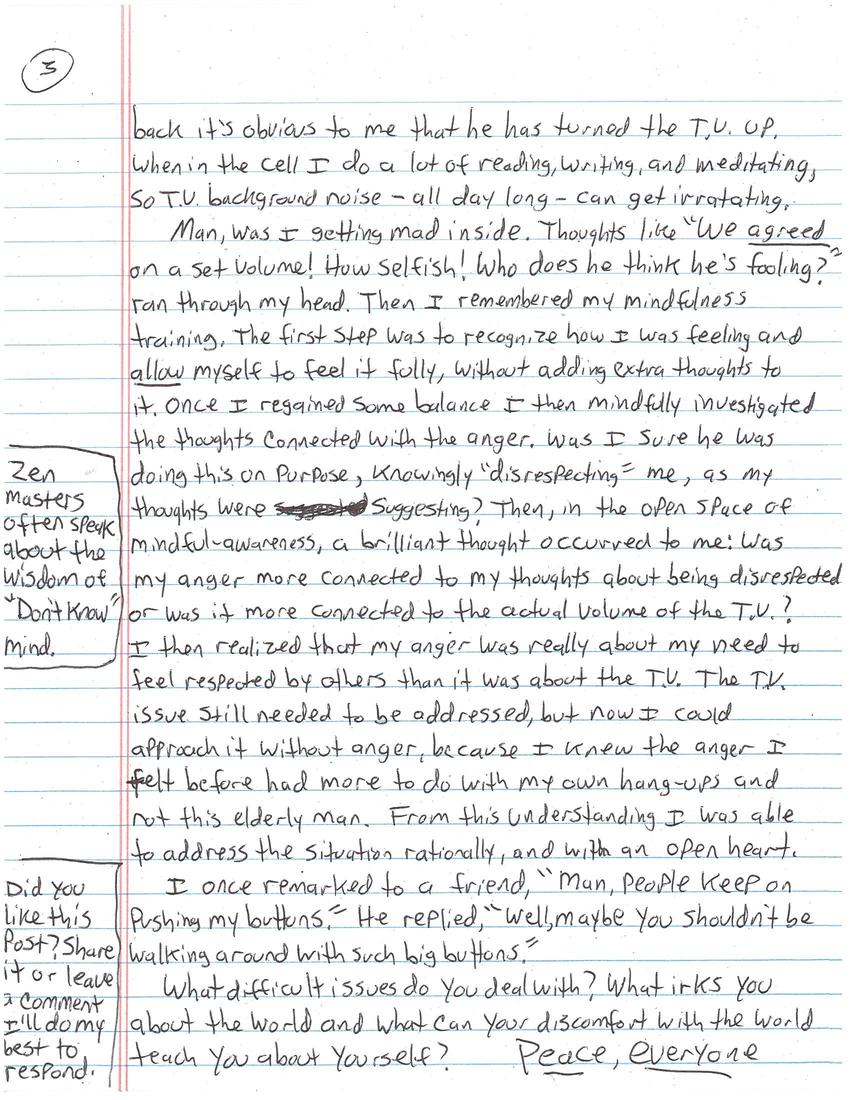 Mindful in Bedlam
By Daniel Labbe

Quote: "If you are distressed by anything external, the pain is not due to the thing itself but to your own estimate of it..." Marcus Aurelius

Life has a wonderful way of triggering our weaknesses. It's as though the world was created specifically to show us those areas with which we need most to work on within ourselves. Think about it. Whether it's anger, addiction, procrastination, a judgemental attitude, or whatever it is you struggle with, your life may appear to be designed to trigger just that issue. For myself, one of those issues is frustration or anger.

Prison certainly seems uniquely designed to trigger anger. For years I believed the stories my anger told me. How this person is being so disrespectful, that person is so selfish, how such and such a situation was so unfair. It was the world OUT THERE that was the problem. If only people would get their sh#! together I wouldn't be so aggravated all the time.

[A wise woman once told me, "Don't believe every thought you think."]

I remember when a therapist told me that no one can MAKE me angry. I thought she was clearly insane. How about when someone steals from me? How about when someone ASSAULTS me? Am I supposed to be happy about those events? It wasn't until a few months later that I finally got it. Even when the anger is appropriate I AM responsible from that anger. Seeing anger from [page folded up, hiding text] to empower me somehow. No longer was anger something that happened TO me, as if I were a victim of anger. I may be a victim of someone else's violating behavior, but the anger, that's MY responsibility. Knowing this was like releasing the pressure within a situation. Someone may be treating me unfairly, and that's something I'll have to address, but at least I am not being "made" to undergo a second assault of anger. That's something I can claim responsibility for and in so doing take control over whether or not I allow myself to be overcome by anger.

[Is it EVER appropriate to be overcome by anger?]

The Buddha said that to HOLD ONTO anger was like shooting yourself with an arrow after someone else has already shot you. Not very helpful, right?

Mindfulness practice has been a tremendous help with deflating anger's impact on my life. Here's a recent example. I recently moved in with a new cell-mate. He's 86 years old and nearly deaf. Due to his hearing problem he turns the volume on his T.V. WAY up. Even though we need headphones to listen to our T.V.s, the volume is so loud on his T.V. it's like having a regular T.V. with a speaker on loud in the cell ALL the time (6:30am - midnight). Due to this situation I made ear-plugs to block the sound. But that didn't work. So I asked my cell-mate if there was a lower volume he could use and still be able to hear his T.V. He said he could lower it to "30" and still hear it. So we agreed that he would keep his TV at 30.

Well, that didn't last long. Oftentimes he will wait until I leave the cell and turn it up high again. When I come back it's obvious to me that he has turned the T.V. up. When in the cell I do a lot of reading, writing, and meditating, so T.V. background noise - all day long - can get irritating.

Man, was I getting mad inside. Thoughts like "We AGREED on a set volume! How selfish! Who does he think he's fooling?" ran through my head? Then I remembered my mindfulness training. The first step was to recognize how I was feeling and ALLOW myself to feel it fully, without adding extra thoughts to it. Once I regained some balance I then mindfully investigated the thoughts connected with the anger. Was I sure he was doing this on purpose, knowingly "disrespecting" me, as my thoughts were suggesting? Then, in the open space of mindful-awareness, a brilliant thought occurred to me: Was my anger more connected to my thoughts about being disrespected or was it more connected to the actual volume of the T.V.? [Zen masters often speak about the wisdom of "Don't know" mind.] I then realized that my anger was really about my need to feel respected by others than it was about the T.V. The T.V. issue still needed to be addressed, but now I could approach it without anger, because I knew the anger I felt before had more to do with my own hang-ups and not this elderly man. From this understanding I was able to address the situation rationally, and with an open heart.

I once remarked to a friend, "Man, people keep on pushing my buttons." He replied, "Well, maybe you shouldn't be walking around with such big buttons."

What difficult issues do you deal with? What irks you about the world and what can your discomfort with the world teach you about yourself? Peace, everyone.