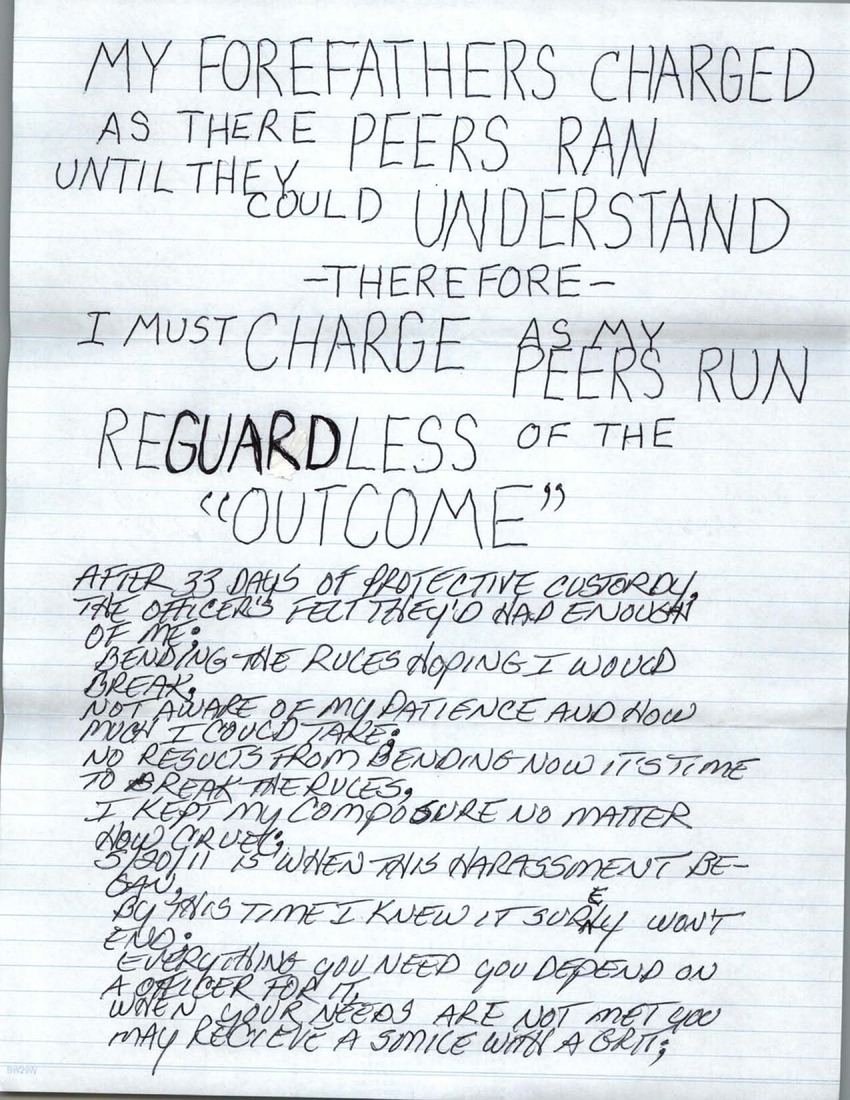 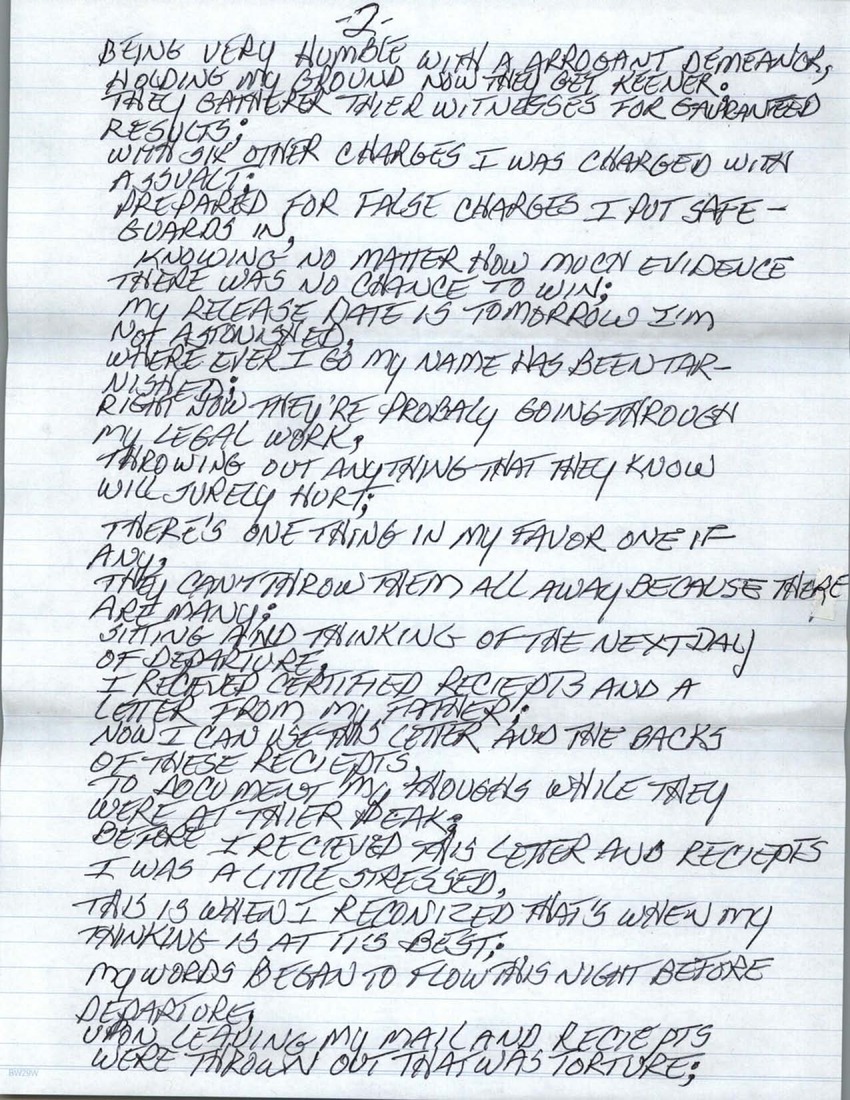 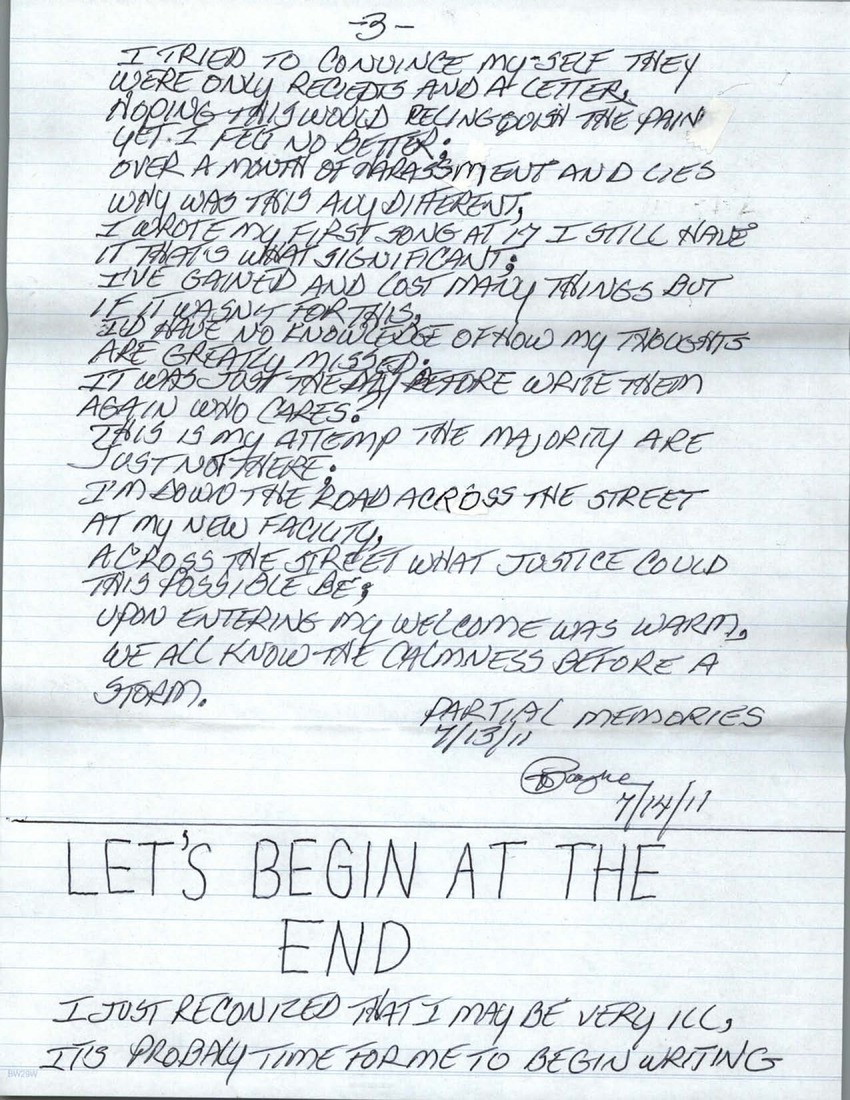 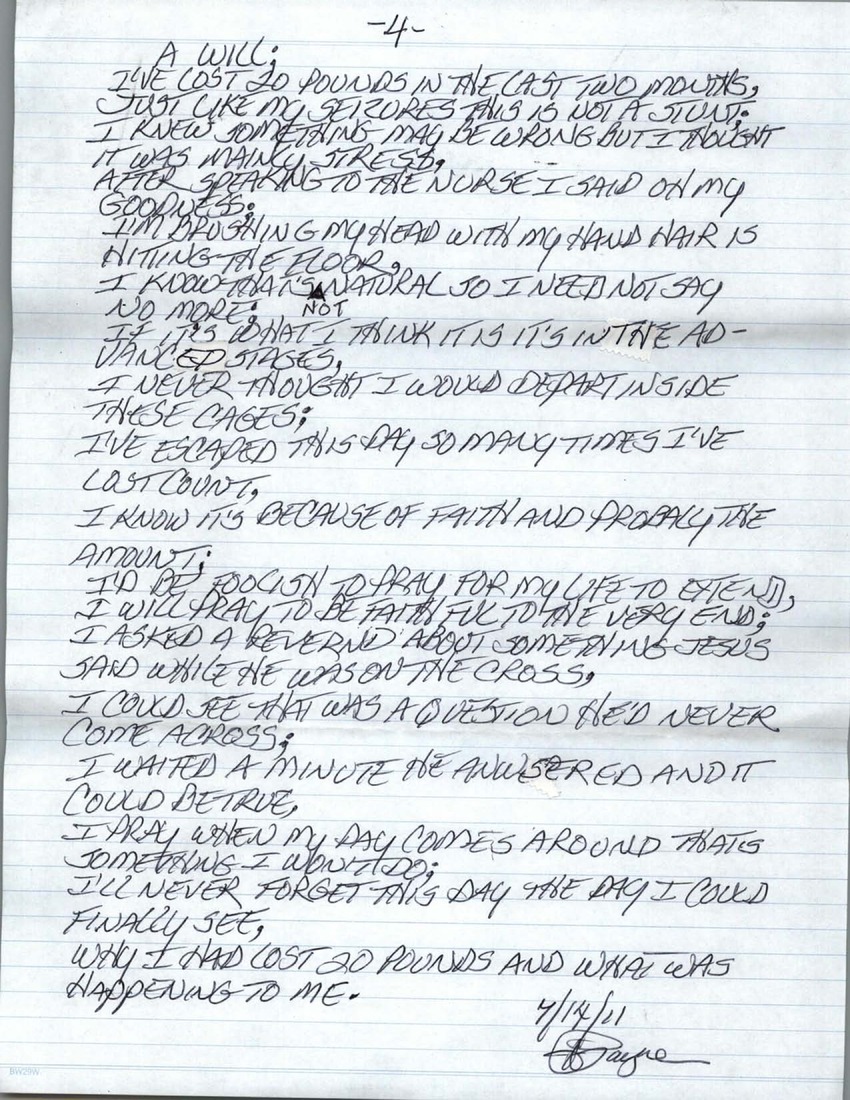 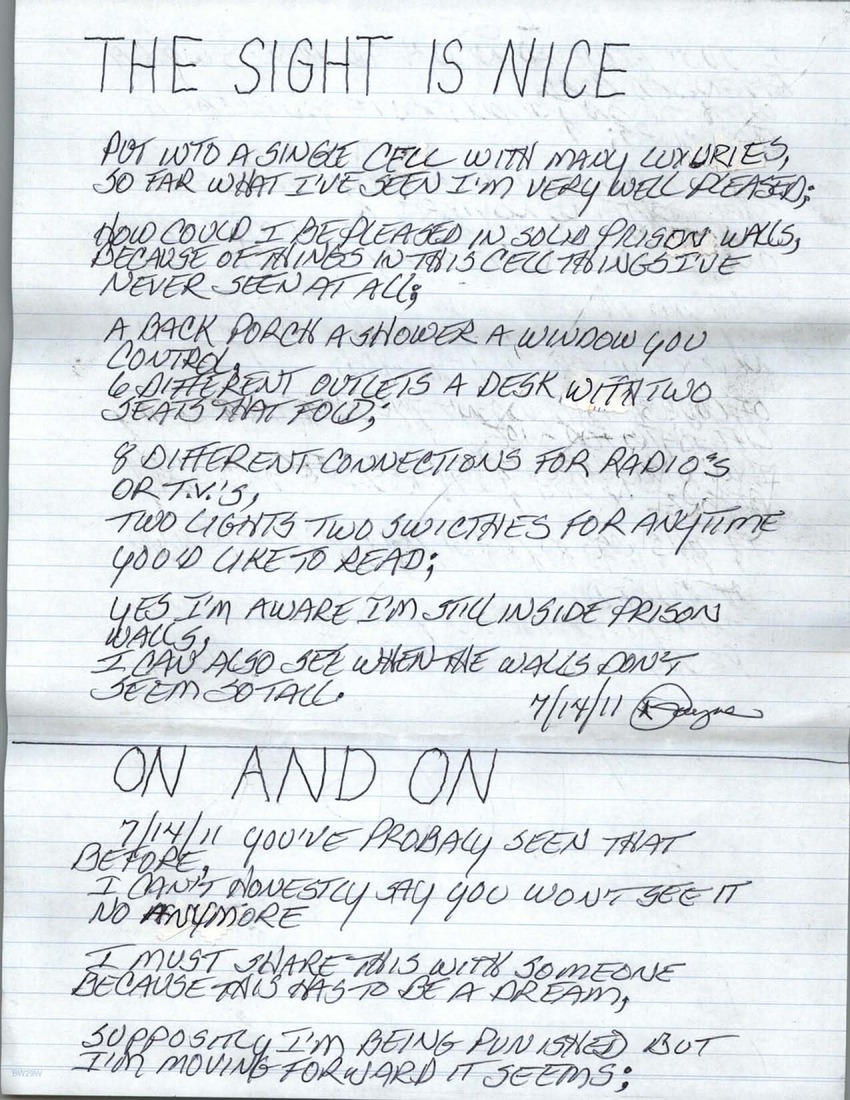 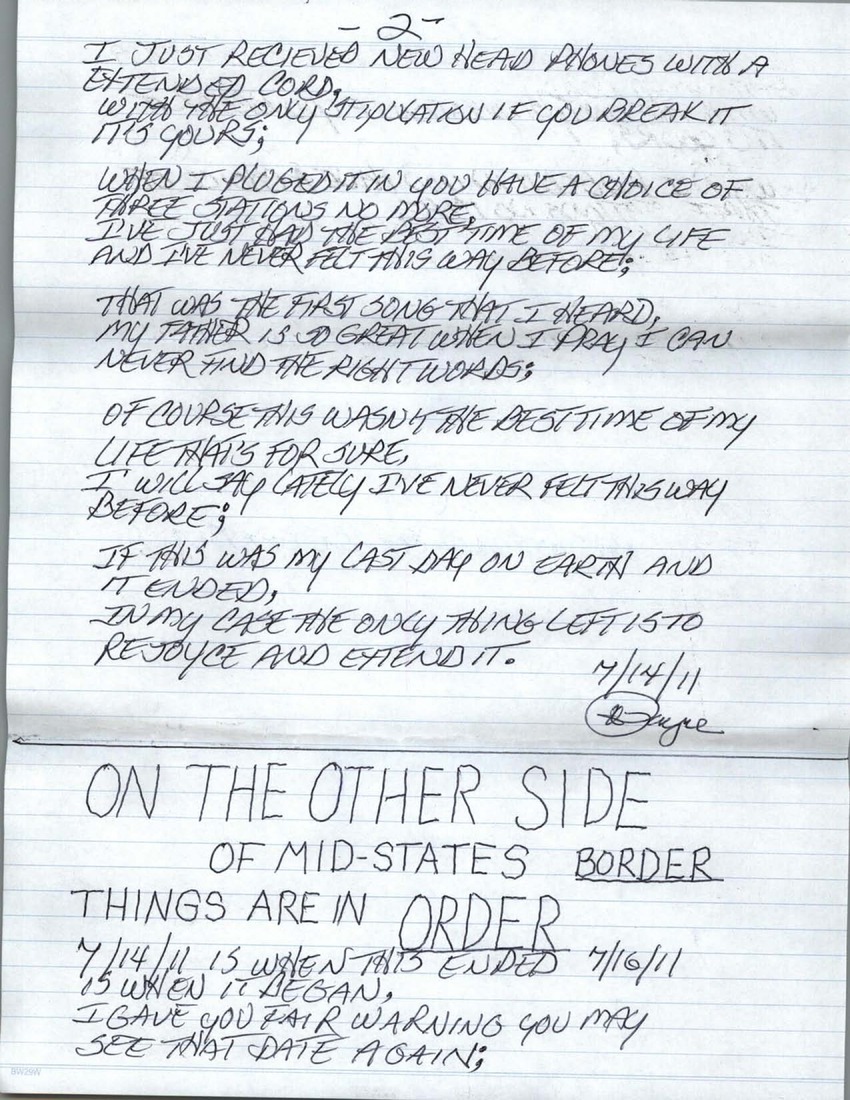 After 33 days of protective custody, the officers felt they'd had enough of me:
Bending the rules hoping I would break.
Not aware of my patience and how much I could take:
No results from bending now it's time to break the rules,
I kept my composure no matter how cruel:
5/20/11 is when this harassment began,
By this time I knew it surely won't end:
Everything you need you depend on an officer for it,
When your needs are not met you may receive a smile with a grit;
Being very humble with an arrogant demeanor,
Holding my ground now they get keener.
They gathered their witnesses for guaranteed results:
With six other charges I was charged with assault:
Prepared for false charges I put safeguards in,
Knowing no matter how much evidence there was no chance to win;
My release date is tomorrow I'm not astonished,
Where ever I go my name has been tarnished;
Right now they're probably going through my legal work,
Throwing out anything that they know will surely hurt;
There's one thing in my favor one if any,
They can't throw them all away because there are many;
Sitting and thinking of the next day of departure,
I received certified receipts and a letter from my father;
Now I can use this letter and the backs of these receipts
To document my thoughts while they were at their peak;
Before I received this letter and receipts I was a little stressed,
This is when I recognized that's when my thinking is at it's best;
My words began to flow this night before departure,
Upon leaving my mail and receipts were thrown out that was torture;
I tried to convince myself they were only receipts and a letter,
Hoping this would relinquish the pain yet I felt no better;
Over a month of harassment and lies
Why was this any different,
I wrote my first song at 17 I still have it that's what's significant;
I've gained and lost many things but if it wasn't for this,
I'd have no knowledge of how my thoughts are greatly missed;
It was just the day before write them again who cares?
This is my attempt the majority are just not there;
I'm down the road across the street at my new facility,
Across the street what justice could this possible be;
Upon entering my welcome was warm,
We all know the calmness before a storm.
Partial memories
7/13/11
Payne
7/13/11
LETS BEGIN AT THE END

I just recognized that I may be very ICC, it's probably time for me to begin writing a will;
I've lost 20 pounds in the last two months, just like my seizures this is not a stunt;
I knew something may be wrong but I thought it was making stress,
After speaking to the nurse I say oh my goodness;
I'm brushing my head with my hand hair is hitting the floor,
I know that's not natural so I need not say no more;
If it's what I think it is it's in the advanced stages,
I never thought I would depart inside these cages;
I've escaped this day so many times I've lost count,
I know it's because of faith and probably the amount;
I'd be foolish to pray for my life to extend,
I will pray to be faithful to the very end;
I asked a reverend about something Jesus said while he was on the cross,
I could see that was a question he'd never come across;
I waited a minute he answered and it could be true,
I pray when my day comes around that's something I won't do;
I'll never forget this day the day I could finally see,
Why I had lost 20 pounds and what was happening to me.
4/14/11
Payne

THE SIGHT IS NICE

Put into a single cell with many luxuries,
So far what I've seen I'm very well pleased;

How could I be pleased in solid prison walls,
Because of things in this cell things I've never seen at all;

A back porch a shower a window you control,
6 different outlets a desk with two seats that fold;

8 different connections for radios or T.V.s
Two lights two switches for anytime you'd like to read;

Yes I'm aware I'm still inside prison walls,
I can also see when the walls don't seem so tall.
7/14/11
Payme

7/14/11 You've probably seen that before,
I can't honestly say you won't see it no anymore

I must share this with someone because this has to be a dream,

Supposedly I'm being punished but I'm moving forward it seems;
I just received new head phones with an extended cord,
With the only stipulation if you break it its yours;

When I plugged it in you have a choice of three stations and no more,
I've just had the best time of my life and I've never felt this way before;

That was the first song that I heard,
My father is so great when I pray I can never find the right words;

Of course this wasn't the best time of my life that's for sure,
I will say lately I've never felt this way before:

If this was my last day on earth and it ended,
In my case the only thing left is to rejoice and extend it.
7/14/11
Payne

7/14/11 is when this ended 7/16/11
is when it began,
I gave you fair warning you may see that date again;
Yesterday morning new arrivals were orientated,
Dealing with several officers and civilians never once degraded;

Thank you, excuse me words we should all use
Of course speaking to an officer, those are words they would never choose

Let's take a step backwards there's an exception to every rule,
I've heard these words from officers
And not one has been cruel;

The staff are hispanic, black and mainly white,
This in itself shows they are attempting to do what's right;

I've only been here a few days at Marcy's Community and Supervision,
The atmosphere is great although it's to soon to make that decision;

These officers realize you don't have to yell and scream to get your point across,
Let's see uniform nightstick and cuffs it's pretty obvious who's boss.