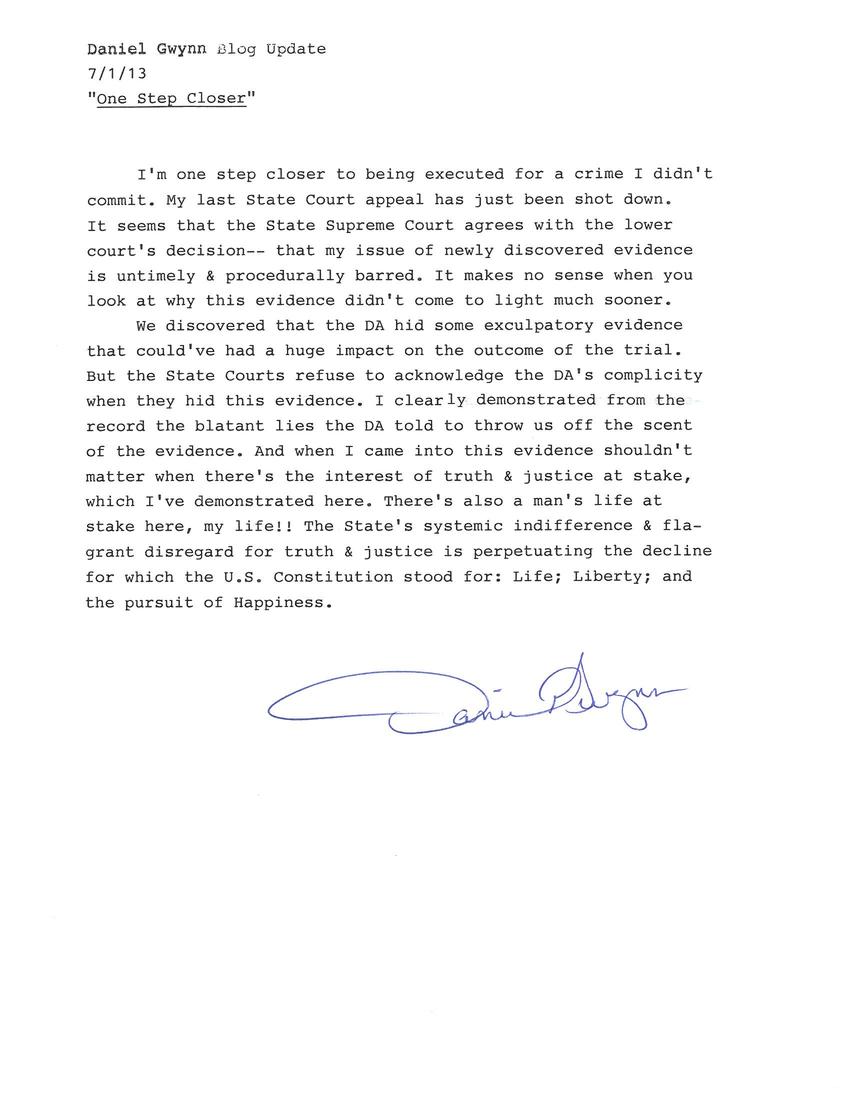 I'm one step closer to being executed for a crime I didn't commit. My last State Court appeal has just been shot down. It seems that the State Supreme Court agrees with the lower court's decision-- that my issue of newly discovered evidence is untimely & procedurally barred. It makes no sense when you look at why this evidence didn't come to light much sooner.

We discovered that the DA hid some exculpatory evidence that couldn've had a huge impact on the outcome of the trial. But the State Courts refuse to acknowledge the DA's complicity when they hid this evidence. I clearly demonstrated from the record the blatant lies the DA told to throw us off the scent of the evidence. And when I came into this evidence shouldn't matter when there's the interest of truth & justice at stake, which I've demonstrated here. There's also a man's life at stake here, my life!! The State's systemic indifference & flagrant disregard for truth & justice is perpetuating the decline for which the U.S. Constitution stood for: Life; Liberty; and the pursuit of Happiness.

I have been reading your blogs and I dont actually know what to say to you.

I know its hard to remain positive in prison, but you cant give up hope and you need to fight this with all that you have.

I want you to know that you are in my thoughts and that if I can help you get your story out to the public, let me know, and I will do all that I can do to help you.

My husband has been on death row for 12 years now and we will never give up, he to has been blamed for a crime that he did not do, and yes, we have all the proof.

If you feel that you would like a friend to talk to then you are welcome to write me, one can never have enough friends,can they?

Just so you know, my name is Alexandra, I am a white female with black hair and green eyes.I am 40 years old. I am a chef and in my spare time I am passionate about karate, I have my black belt and reached up to second dan.

Until I hear from you, know that you are in my thoughts. 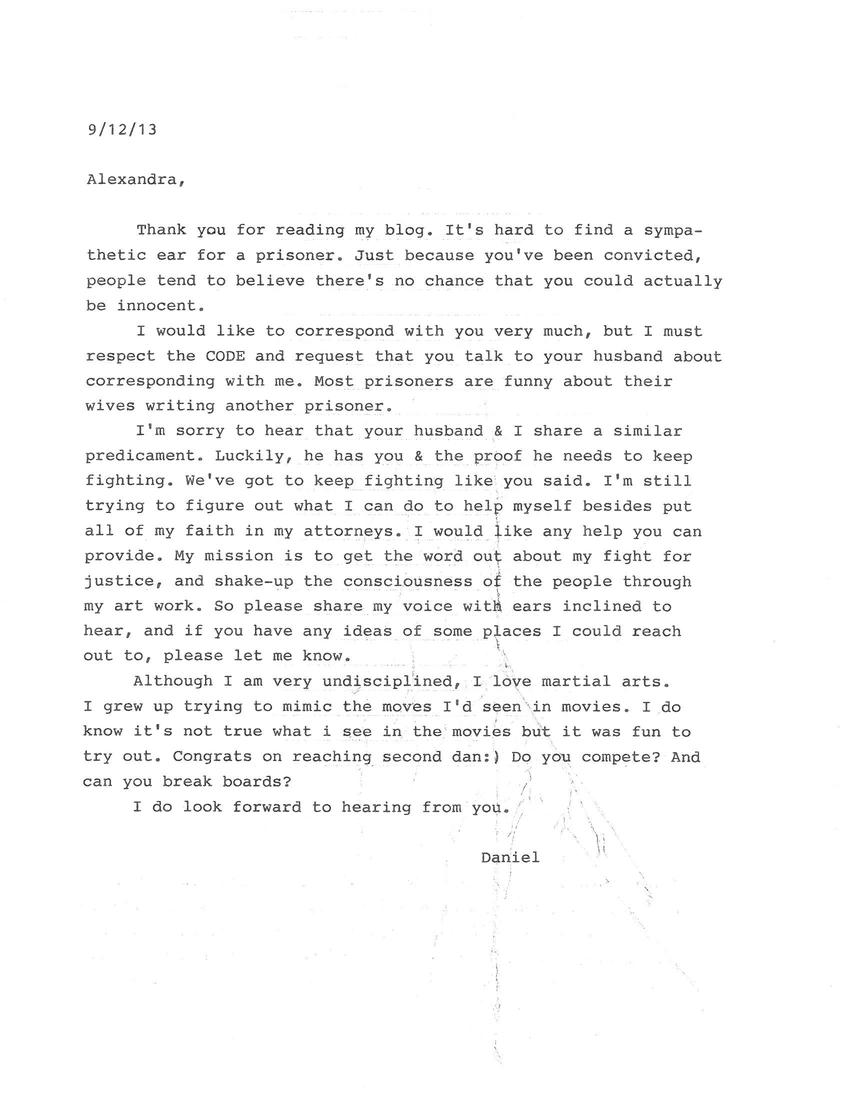 I know its been a while since I have written to you but its been a very hectic last few weeks and some not so good days.

First off, thank you for writing me back, I have told my man about you ans he has no problem with me writing you, you see, we trust each other completely and we both know the consequences if the other strays, so we are good, yes?

I will say you made me smile when asking if I can break a brick with my hands and to answer your question, yes I can :) but I mainly do the sport as an act of self discipline and peace.I dont know exactly how to explain it but when I practice I feel at peace with the world and myself, strange, dont you think?

I will tell you a secret though, I have had a few broken ribs, a few cracked ribs and a broken arm a few times when doing tournaments,
but I will never give up karate, its just become a way of life for me now.

Oh, before I forget I must let you know that my husband is in prison in Alabama and I am currently living in South Africa. So if you have any questions, feel free to ask, ok?

Do you have an address where I can write you?

So, as we begin a new friendship, why dont you tell me about yourself and I will do the same.

Until I here from you, stay strong and know that you are in my thoughts. 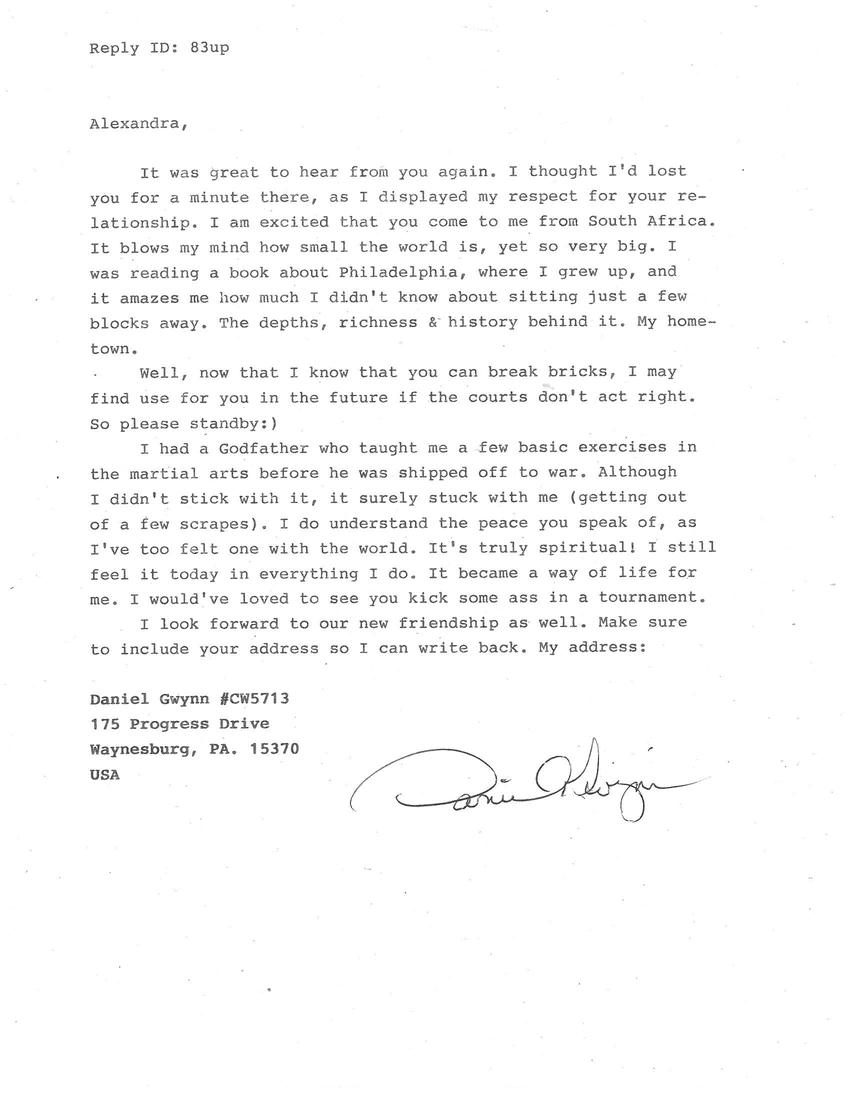 I have written snail to you so please look out or it.

Just wanted to wish you a happy Christmas for today and to let you know that I was thinking of you and all my pen pals that write as well.

Take care and look out for snail. 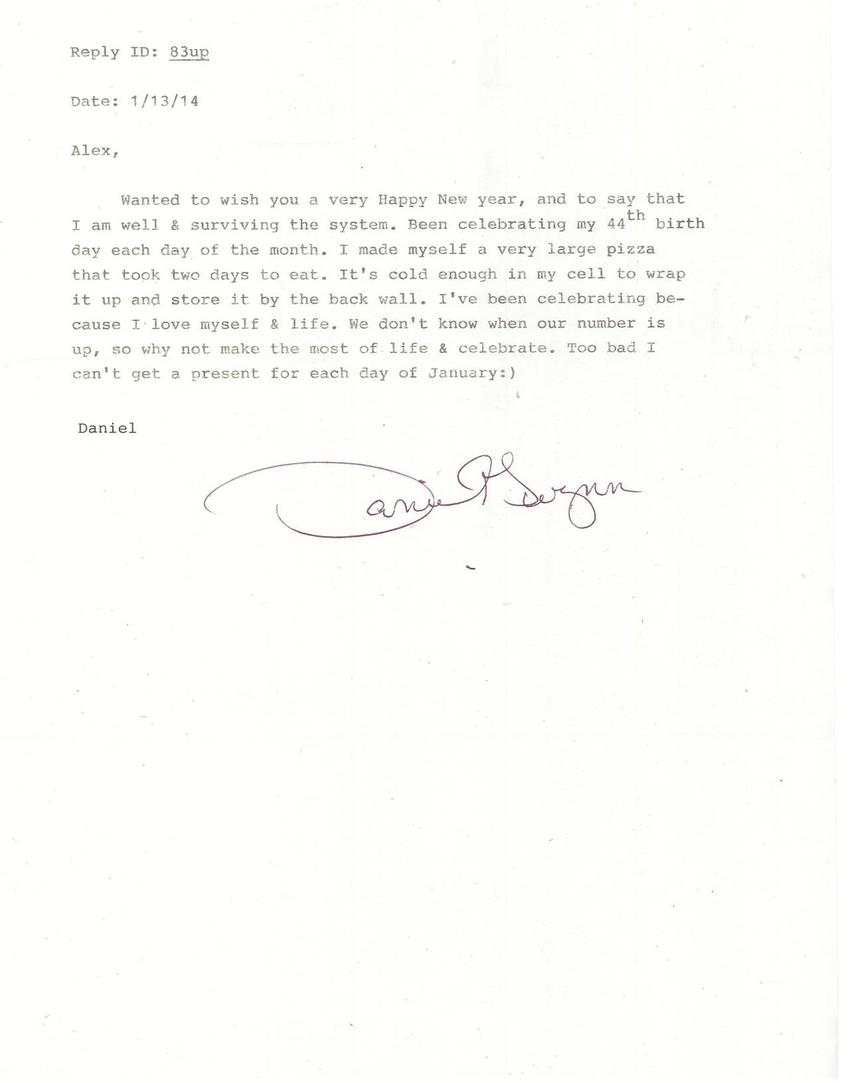