My Introduction to AVP 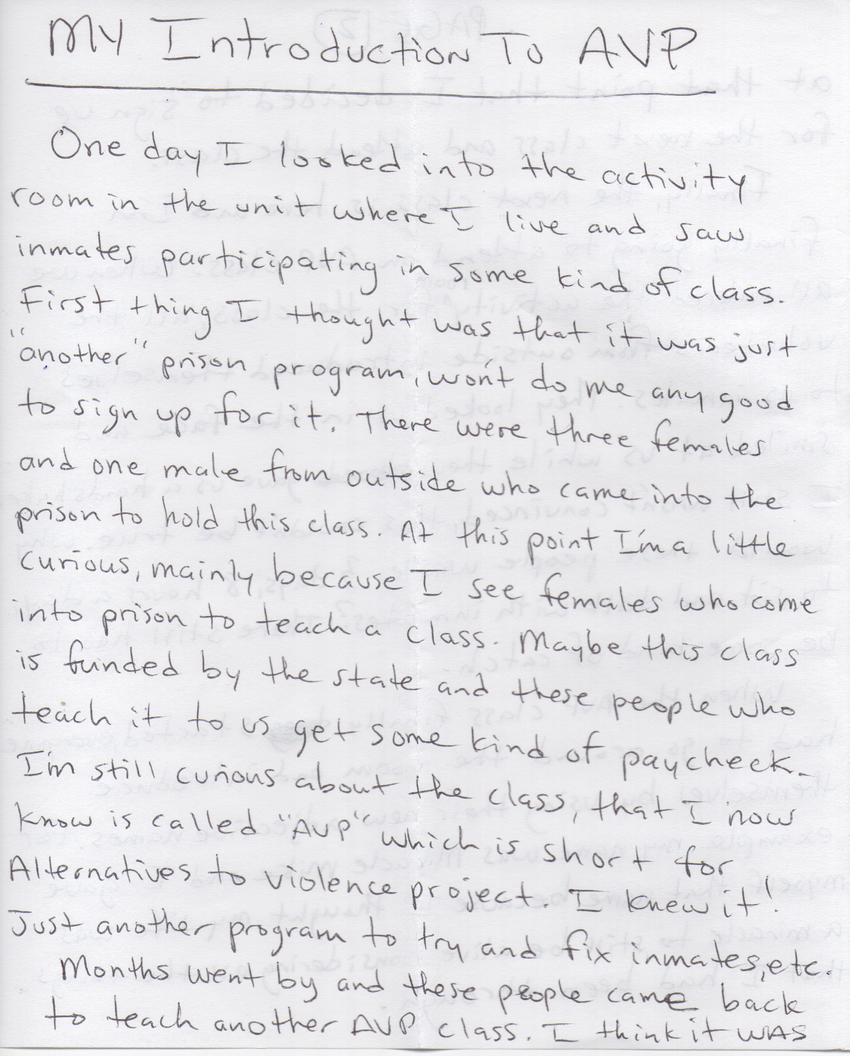 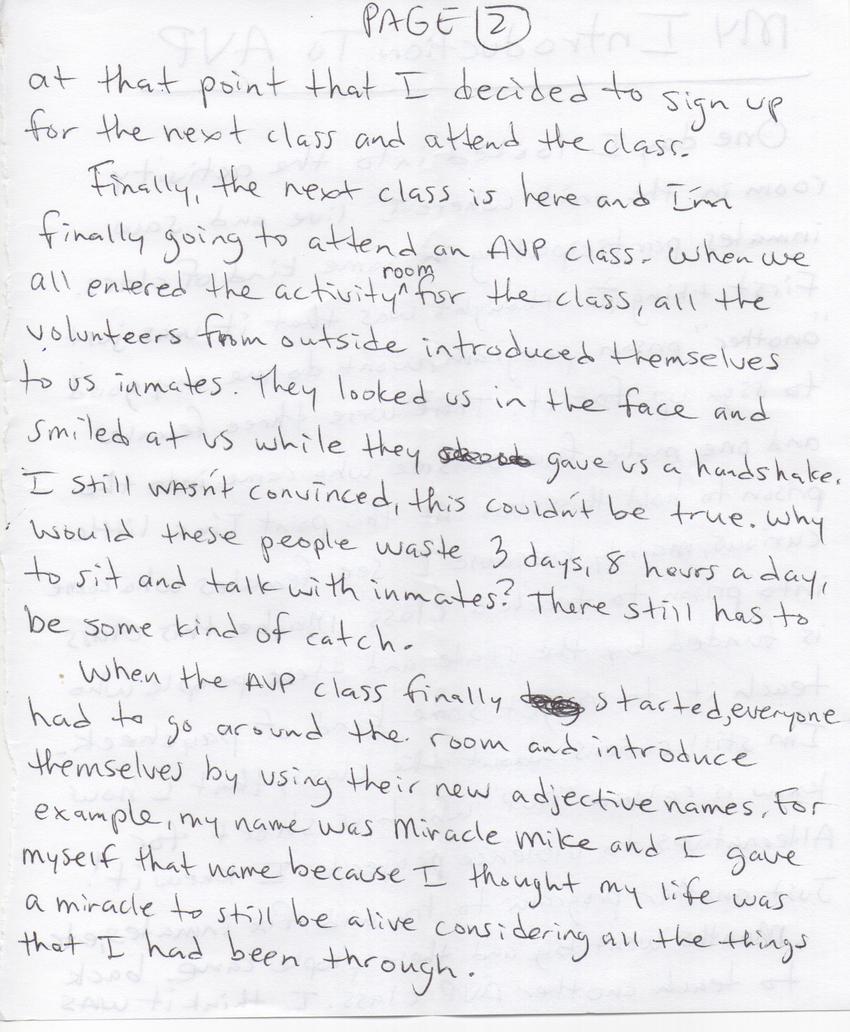 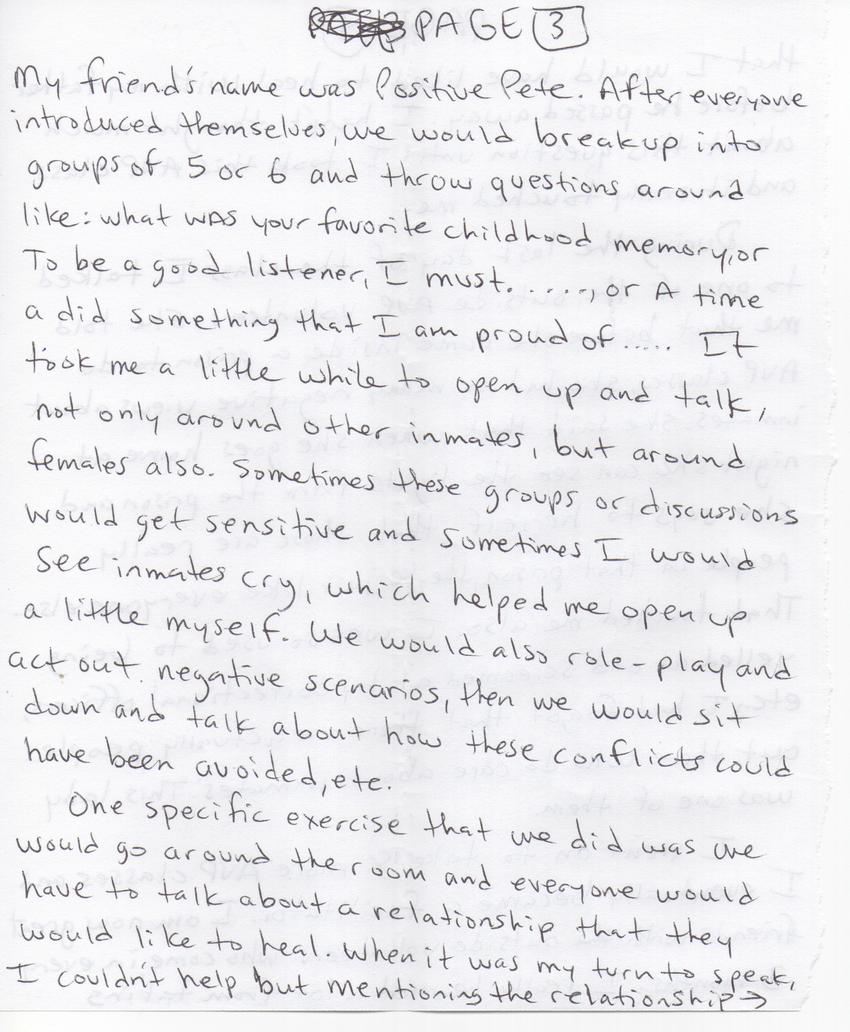 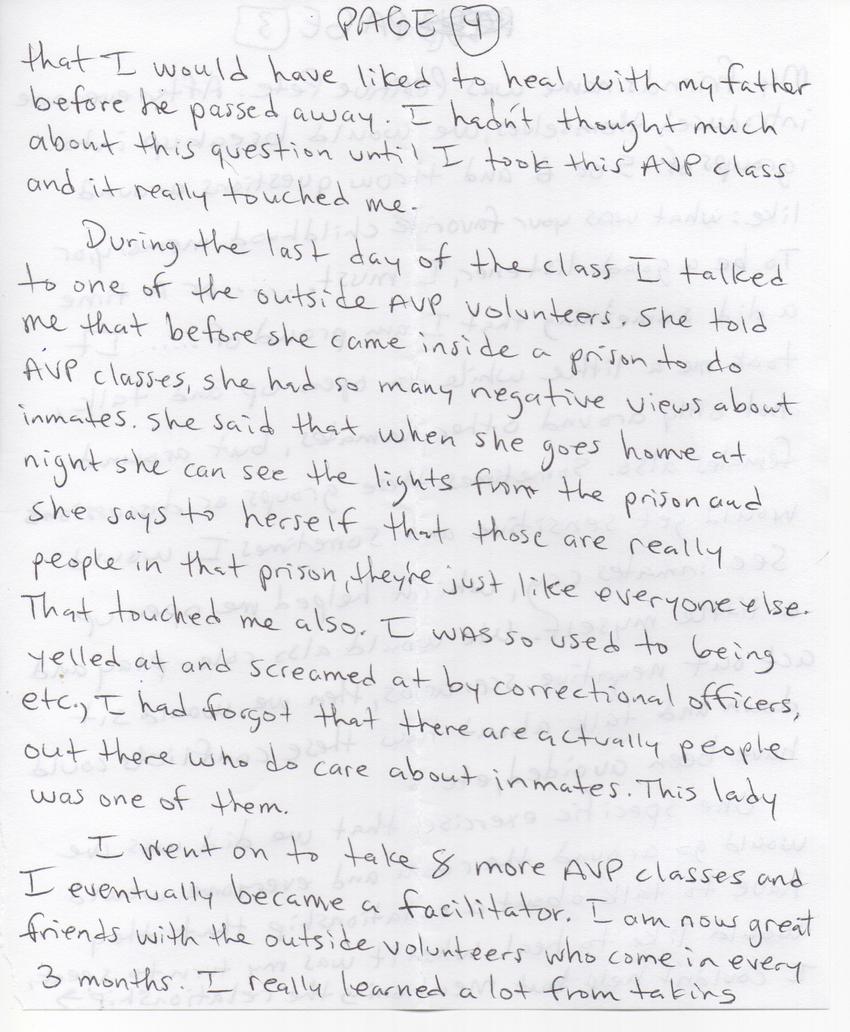 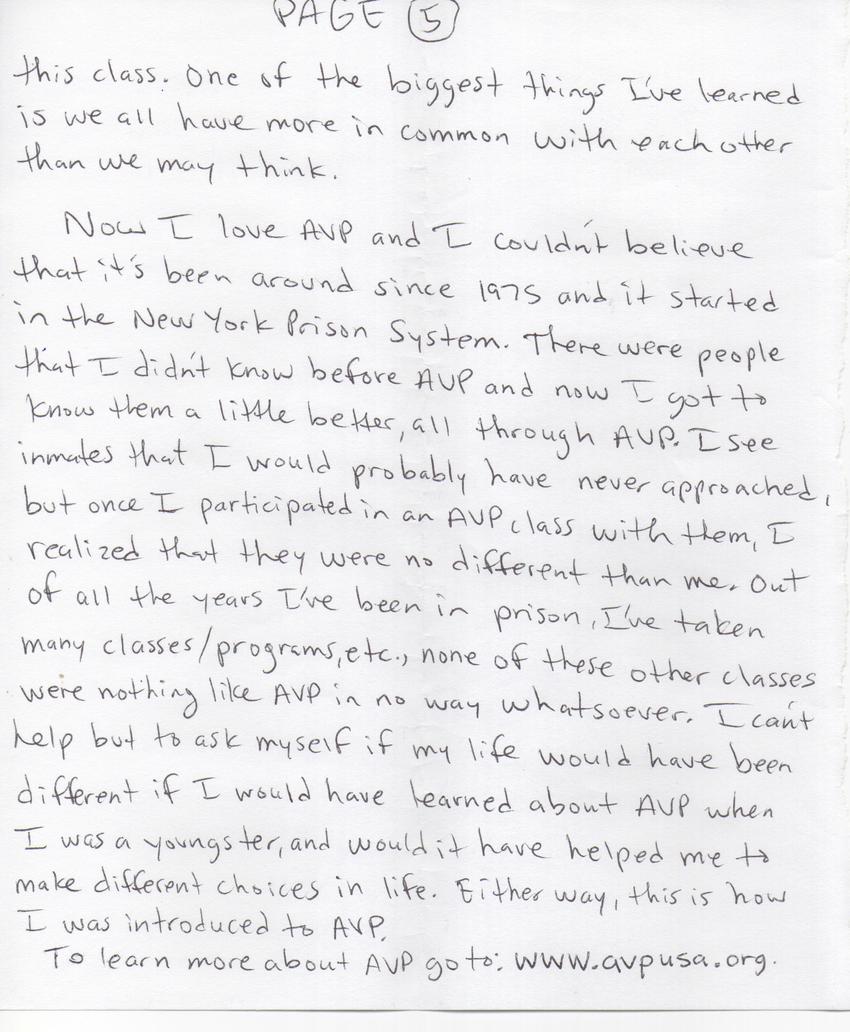 My Introduction To AVP

One day I looked into the activity room in the unit where I live and saw inmates participating in some kind of class. First thing I thought was that it was just "another" prison program, won't do me any good to sign up for it. There were three females and one male from outside who came into the prison to hold this class. At this point I'm a little curious, mainly because I see females who come into prison to teach a class. Maybe this class is funded by the state and these people who teach it to us get some kind of paycheck. I'm still curious about the class, that I now know is called "AVP" which is short for Alternatives to Violence Project. I knew it! Just another program to try and fix inmates, etc.
Months went by and these people came back to teach another AVP class. I think it was at that point that I decided to sign up for the next class and attend the class. Finally, the next class is here and I'm finally going to attend an AVP class. When we all entered the activity room for the class, all the volunteers from outside introduced themselves to us inmates. They looked us in the face and smiled at us while they gave us a handshake. I still wasn't convinced, this couldn't be true. Why would these people waste 3 days. 8 hours a day, to sit and talk with inmates? There still has to be some kind of catch.
When the AVP class finally started, everyone had to go around the room and introduce themselves by using their new adjective names. For example, my name was Miracle Mike and I gave myself that name because I thought my life was a miracle to still be alive considering all the things that I had been through. My friend's name was Positive Pete. After everyone introduced themselves, we would breakup into groups of 5 or 6 and throw questions around like: What was your favorite childhood memory, or To be a good listener, I must...., or A time I did something that I am proud of.... It took me a little while to open up and talk, not only around other inmates, but around females also. Sometimes these groups or discussions would get sensitive and sometime I would see inmates cry, which helped me open up a little myself. We would also role-play and act out negative scenarios, then we would sit down and talk about how these conflicts could have been avoided, etc.
One specific exercise that we did was we would go around the room and everyone would have to talk about a relationship that they would like to heal. When it was my turn to speak I couldn't help but mentioning the relationship that I would have liked to heal with my father before he passed away. I hadn't thought much about this question until I took this AVP class and it really touched me.
During the last day of the class I talked to one of the outside AVP volunteers. She told me that before she came inside a prison to do AVP classes, she had so many negative views about inmates. She said that when she goes home at night she can see the lights from the prison and she says to herself that those are really people in that prison, they're just like everyone else. That touched me also. I was so used to being yelled at and screamed as by correctional officers, etc. I had forgot that there are actually people out there who do care about inmates. This lady was one of them.
I went on to take 8 more AVP classes and I eventually became a facilitator. I am now great friends with the outside volunteers who come in every 3 months. I really learned a lot from taking this class. One of the biggest things I've learned is we all have more in common with each other than we may think.
Now I love AVP and I couldn't believe that it's been around since 1975 and it started in the New York Prison System. There were people that I didn't know before AVP and now I got to know them a little better, all through AVP. I see inmates that I would probably have never approached, but once I participated in an AVP class with them, I realized that they were no different than me. Out of all the years I've been in prison, I've taken many classes/programs, etc. None of these other classes were nothing like AVP in no way whatsoever. I can't help but to ask myself if my life would have been different if I would have learned about AVP when I was a youngster, and would it have helped me to make different choices in life. either was, this is how I was introduced to AVP.
To learn more about AVP go to: www.avpusa.org

This was a great story to tell. I am a student working toward a degree in criminal justice so I read a lot about how the system works or does not work but I really haven't seen what goes on inside the walls of a prison. I am glad that there are programs for inmates that are beneficial aside from educational services.
Kudos to you Miracle Mike for taking that first step to better yourself!
(scanned reply – view as blog post)
uploaded Feb. 3, 2014.  Original (PDF) 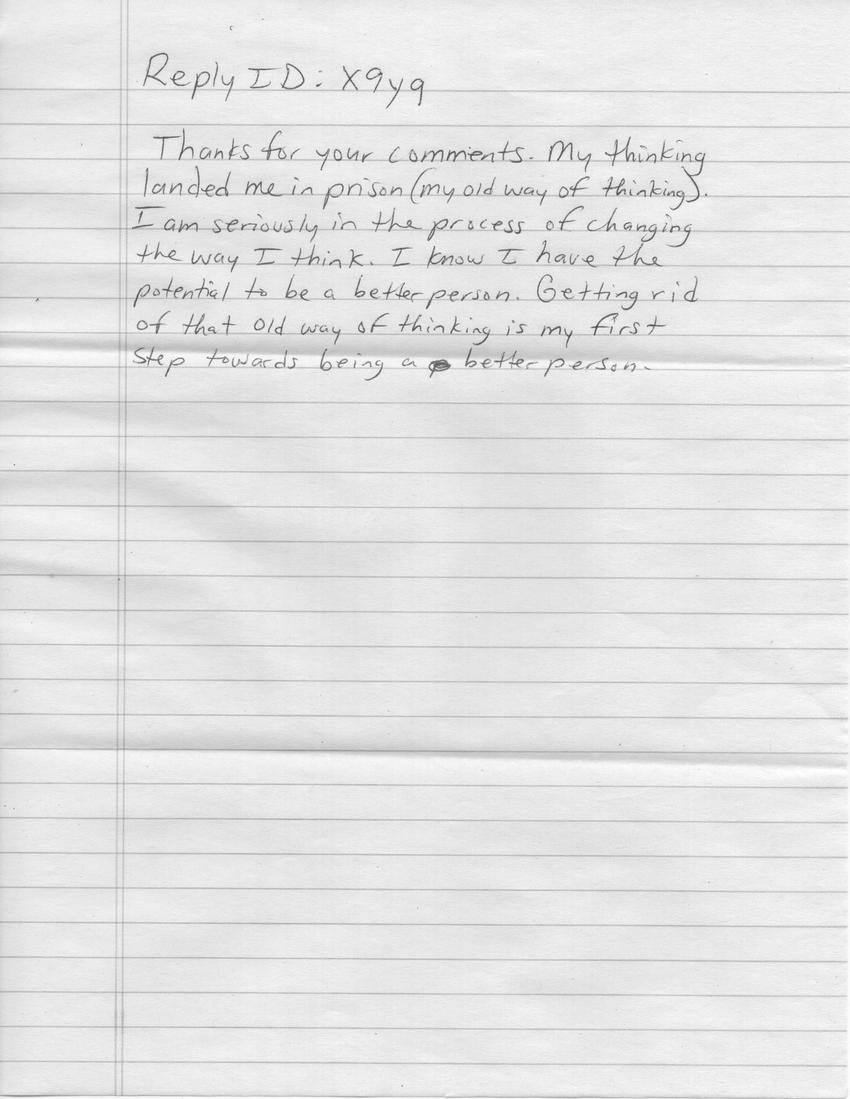 Your story was quite intriguing -- enough so that I checked out the AVP website as you suggested. The information and videos are very enlightening and have really started expanding my thinking. I teach in a high school, so understanding a little more about the root of violence is important. 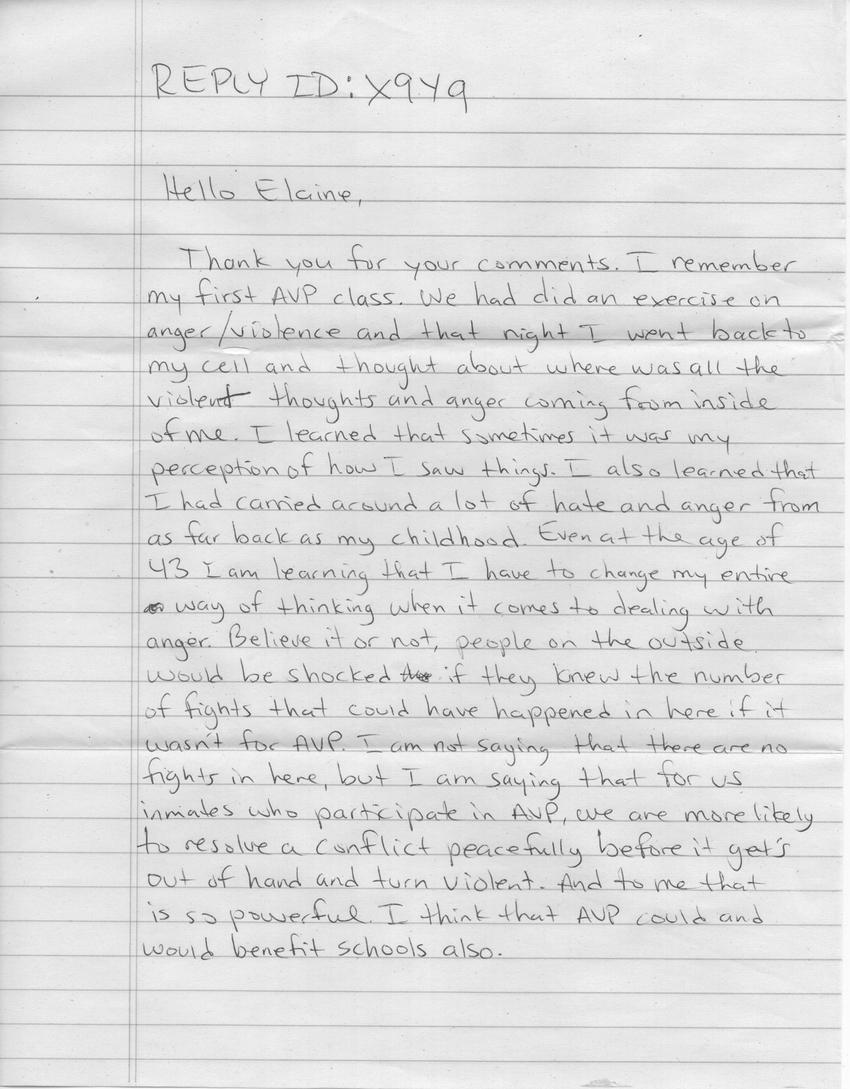 Wow that's not something i'd expect. It's obvious that prison is portrait as violent, so most people would think that inmates wouldn't want to change that.

Good to know that this is not accurate.