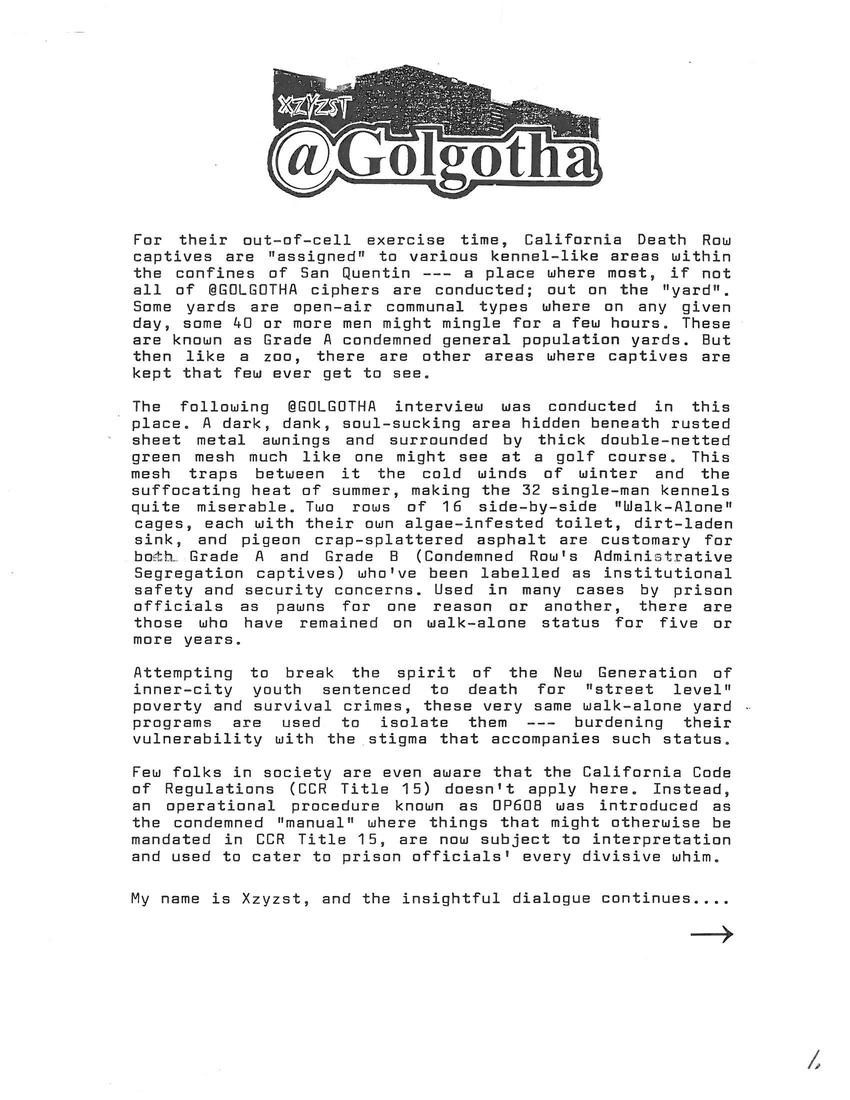 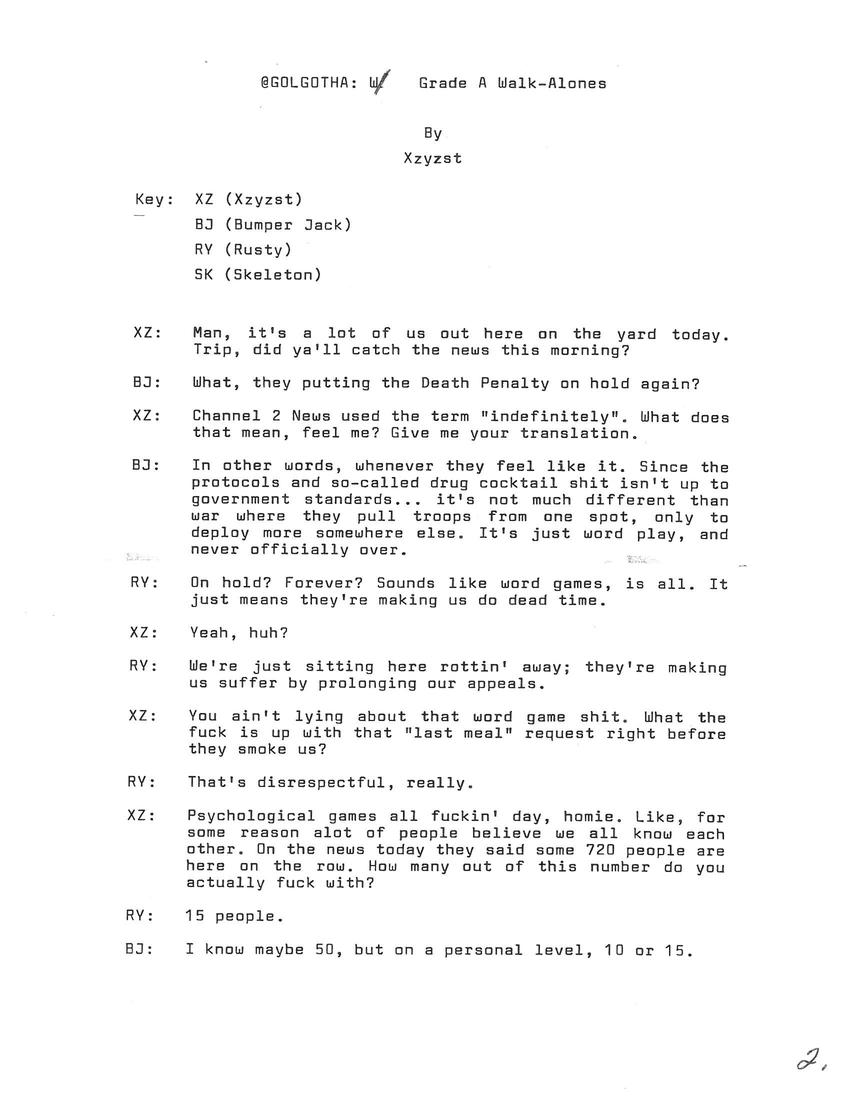 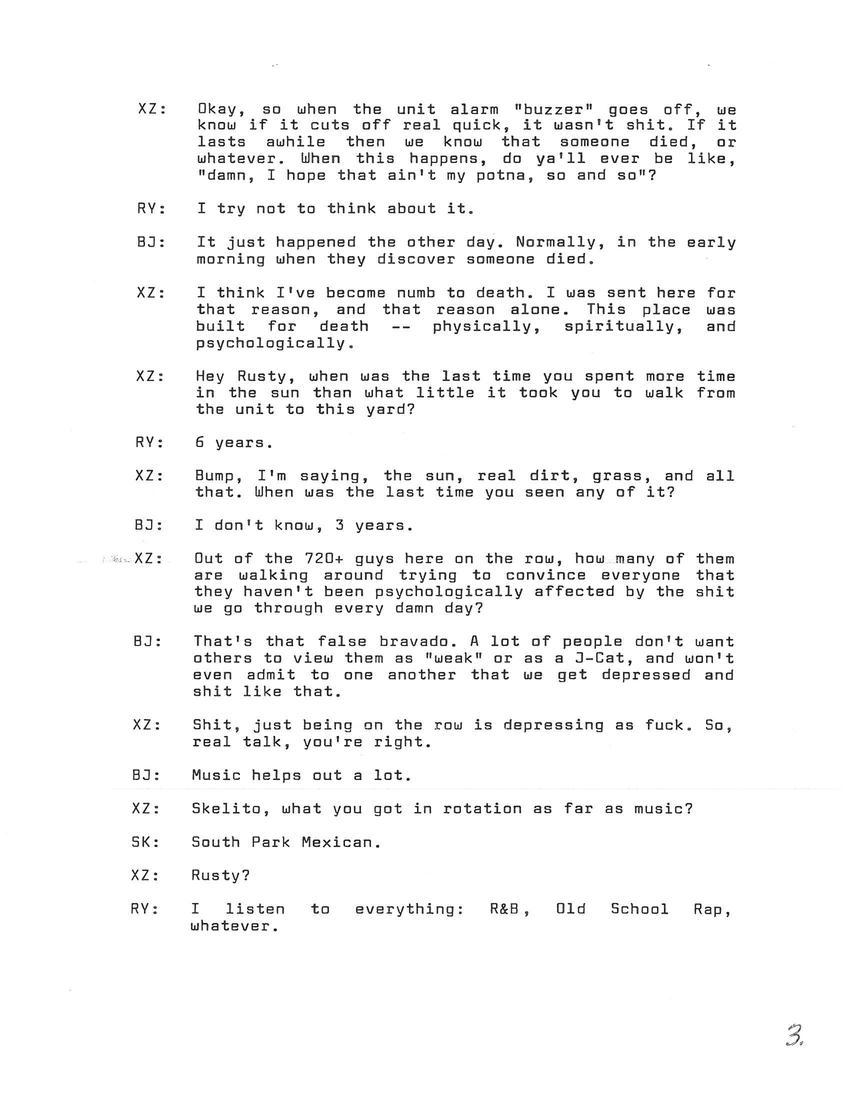 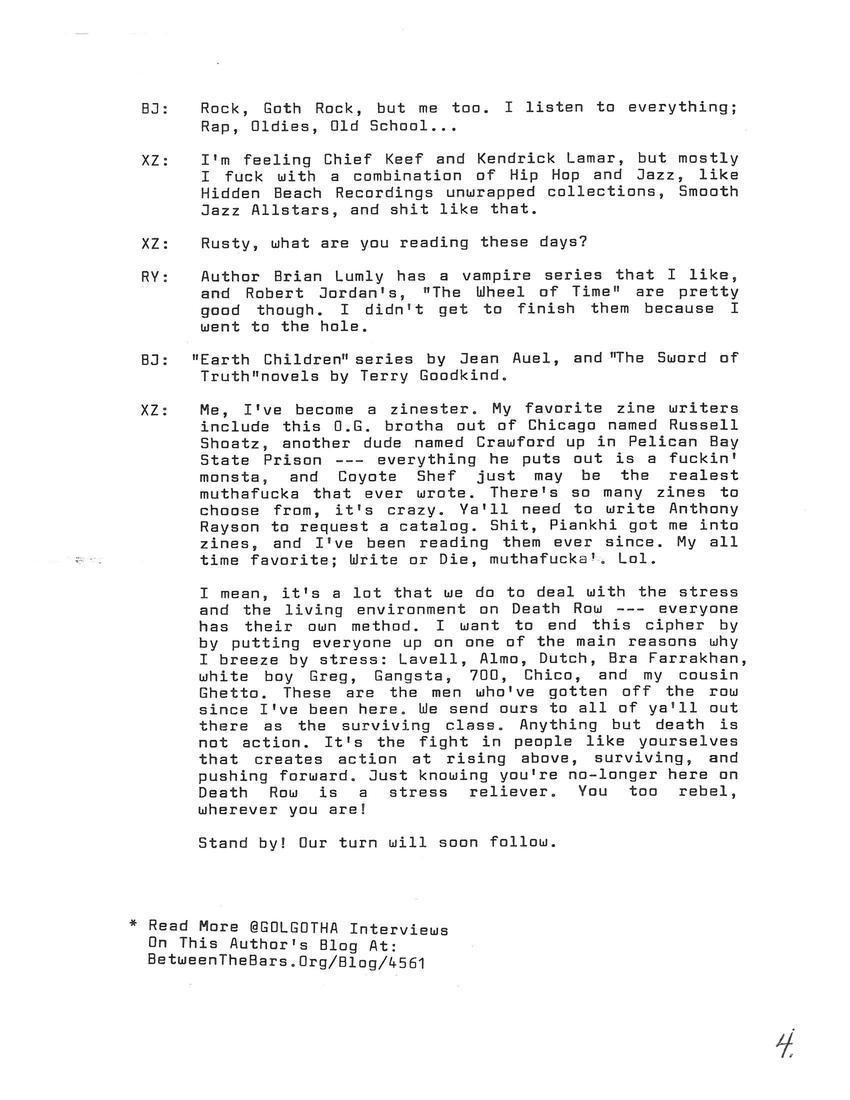 For their out-of-cell exercise time, California Death Row captives are "assigned" to various kennel-like areas within the confines of San Quentin --- a place where most, if not all of @GOLGOTHA ciphers are conducted; out on the "yard". Some yards are open-air communal types where on any given day, some 40 or more men might mingle for a few hours. These are known as Grade A condemned general population yards. But then like a zoo, there are other areas where captives are kept that few ever get to see.

The following @GOLGOTHA interview was conducted in this place. A dark, dank, soul-sucking area hidden beneath rusted sheet metal awnings and surrounded by thick double-netted green mesh much like one might see at a golf course. This mesh traps between it the cold winds of winter and the suffocating heat of summer, making the 32 single-man kennels quite miserable. Two rows of 16 side-by-side "Walk-Alone" cages, each with their own algae-infested toilet, dirt-laden sink, and pigeon crap-splattered asphalt are customary for both Grade A and Grade B (Condemned Row's Administrative Segregation captives) who've been labelled as institutional safety and security concerns. Used in many cases by prison officials as pawns for one reason or another, there are those who have remained on walk-alone status for five or more years.

Attempting to break the spirit of the New Generation of inner-city youth sentenced to death for "street level" poverty and survival crimes, these very same walk-alone yard programs are used to isolate them --- burdening their vulnerability with the stigma that accompanies such status.

Few folks in society are even aware that the California Code of Regulations (CCR Title 15) doesn't apply here. Instead, an operational procedure known as OP608 was introduced as the condemned "manual" where things that might otherwise be mandated in CCR Title 15, are now subject to interpretation and used to cater to prison officials' every divisive whim.

My name is Xzyzst, and the insightful dialogue continues...

XZ: Man, it's a lot of us out here on the yard today. Trip, did y'all catch the news this morning?

BJ: What, they putting the Death Penalty on hold again?

XZ: Channel 2 News used the term "indefinitely". What does that mean, feel me? Give me your translation.

BJ: In other words, whenever they feel like it. Since the protocols and so-called drug cocktail shit isn't up to government standards... it's not much different than war where they pull troops from one spot, only to deploy more somewhere else. It's just word play, and never officially over.

RY: On hold? Forever? Sounds like word games, is all. It just means they're making us do dead time.

RY: We're just sitting here rottin' away; they're making us suffer by prolonging our appeals.

XZ: You ain't lying about that word game shit. What the fuck is up with that "last meal" request right before they smoke us?

XZ: Psychological games all fuckin' day, homie. Like, for some reason a lot of people believe we all know each other. On the news today they said some 720 people are here on the row. How many out of this number do you actually fuck with?

XZ: Okay, so when the unit alarm "buzzer" goes off, we know if it cuts off real quick, it wasn't shit. If it lasts awhile then we know that someone died, or whatever. When this happens, do y'all ever be like, "damn, I hope that ain't my potna, so and so"?

RY: I try not to think about it.

BJ: It just happened the other day. Normally, in the early morning when they discover someone died.

XZ: I think I've become numb to death. I was sent here for that reason, and that reason alone. This place was built for death -- physically, spiritually, and psychologically.

XZ: Hey Rusty, when was the last time you spent more time in the sun than what little it took you to walk from the unit to this yard?

XZ: Bump, I'm saying, the sun, real dirt, grass, and all that. When was the last time you seen any of it?

XZ: Out of the 720+ guys here on the row, how many of them are walking around trying to convince everyone that they haven't been psychologically affected by the shit we go through every damn day?

BJ: That's that false bravado. A lot of people don't want others to view them as "weak" or as a J-Cat, and won't even admit to one another that we get depressed and shit like that.

XZ: Shit, just being on the row is depressing as fuck. So, real talk, you're right.

BJ: Music helps out a lot.

XZ: Skelito, what you got in rotation as far as music?

RY: I listen to everything: R&B, Old School Rap, whatever.

BJ: Rock, Goth Rock, but me too. I listen to everything; Rap, Oldies, Old School...

XZ: I'm feeling Chief Keef and Kendrick Lamar, but mostly I fuck with a combination of Hip Hop and Jazz, like Hidden Beach Recordings unwrapped collections, Smooth Jazz Allstars, and shit like that.

XZ: Rusty, what are you reading these days?

RY: Author Brian Lumly has a vampire series that I like, and Robert Jordan's "The Wheel of Time" are pretty good though. I didn't get to finish them because I went to the hole.

BJ: "Earth Children" series by Jean Auel, and "The Sword of Truth" novels by Terry Goodkind.

XZ: Me, I've become a zinester. My favorite zine writers include this O.G. brotha out of Chicago named Russell Shoatz, another dude named Crawford up in Pelican Bay State Prison --- everything he puts out is a fuckin' monsta, and Coyote Shef just may be the realest muthafucka that ever wrote. There's so many zines to choose from, it's crazy. Y'all need to write Anthony Rayson to request a catalog. Shit, Piankhi got me into zines, and I've been reading them ever since. My all time favorite; Write or Die, muthafucka'. Lol.

I mean, it's a lot that we do to deal with the stress and the living environment on Death Row --- everyone has their own method. I want to end this cipher by putting everyone up on one of the main reasons why I breeze by stress: Lavell, Almo, Dutch, Bra Farrakhan, white boy Greg, Gangsta, 700, Chico, and my cousin Ghetto. These are the men who've gotten off the row since I've been here. We send ours to all of y'all out there as the surviving class. Anything but death is not action. It's the fight in people like yourselves that creates action at rising above, surviving, and pushing forward. Just knowing you're no-longer here on Death Row is a stress reliever. You too rebel, wherever you are!

* Read More @GOLGOTHA Interviews
On This Author's Blog At:
BetweenTheBars.Org/Blog/4561 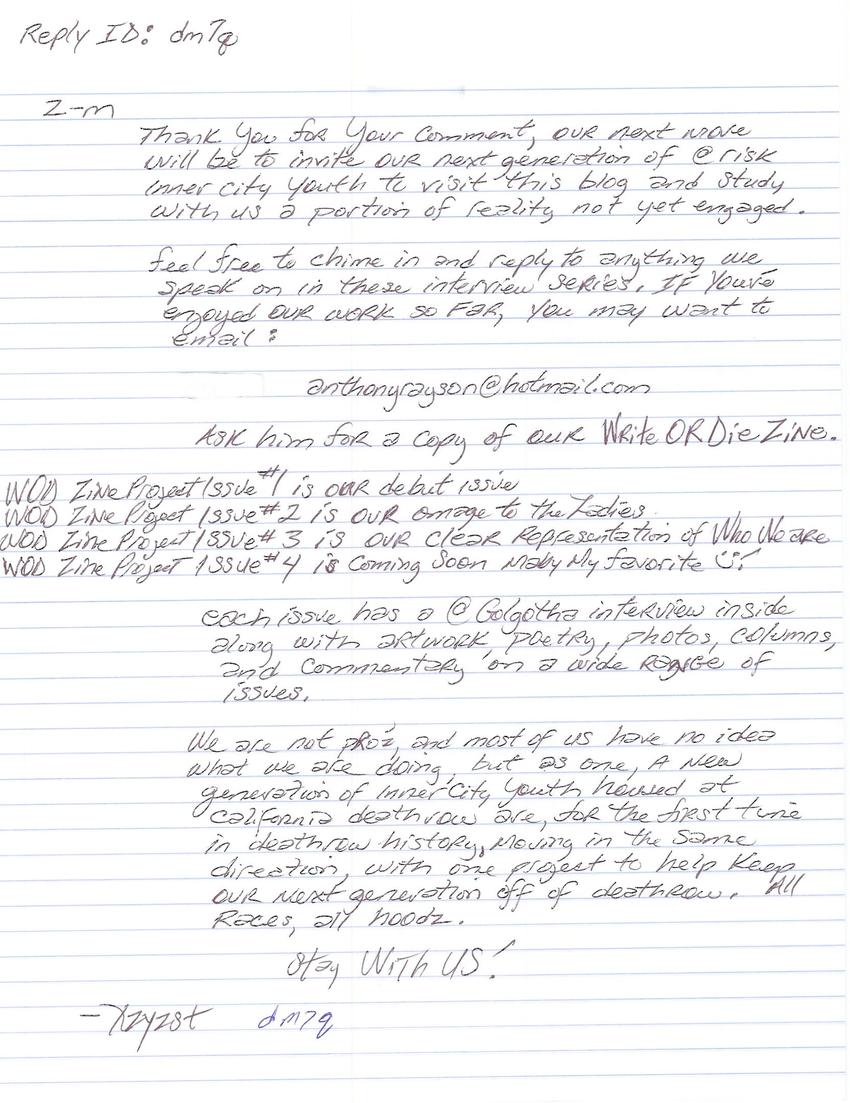