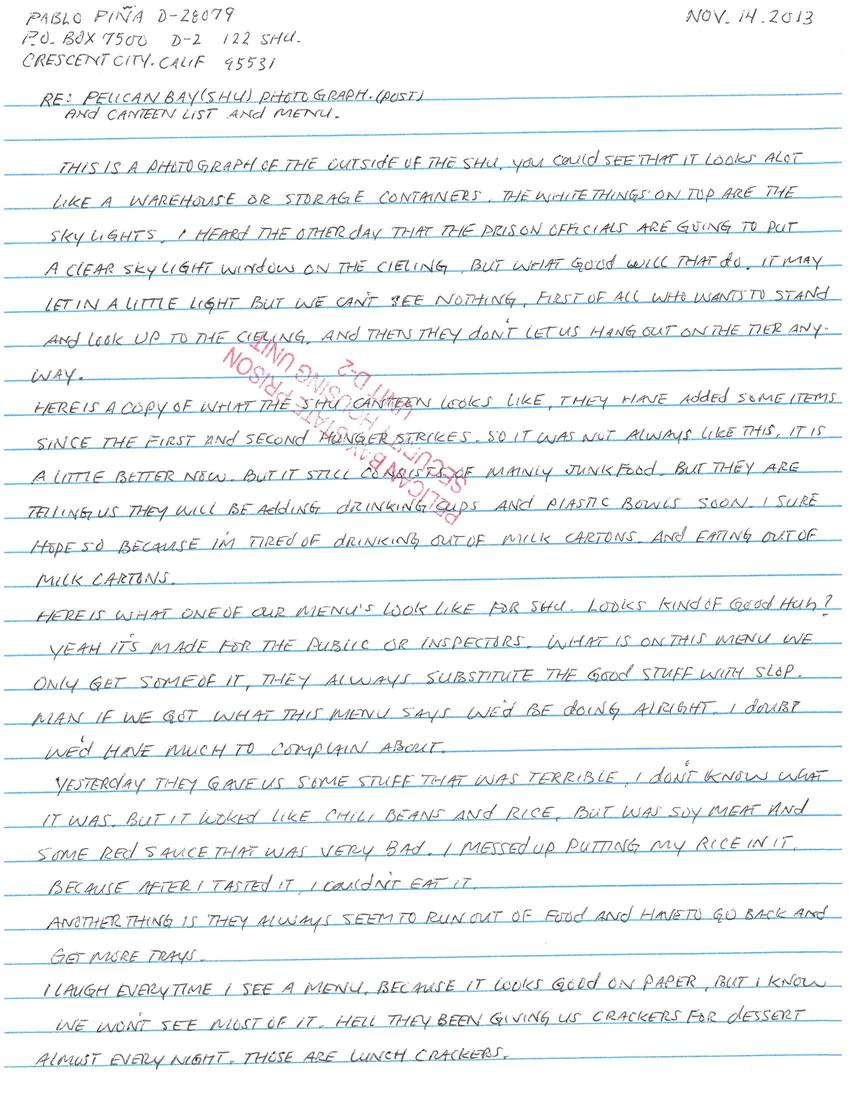 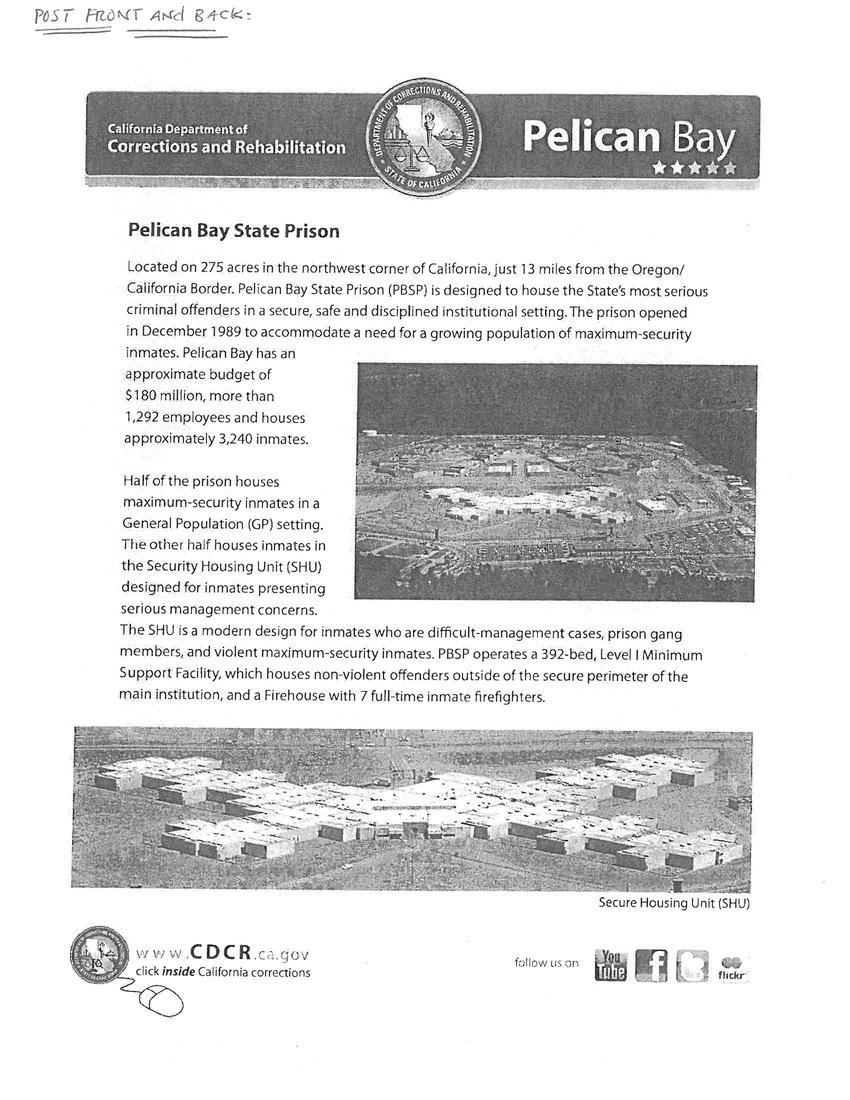 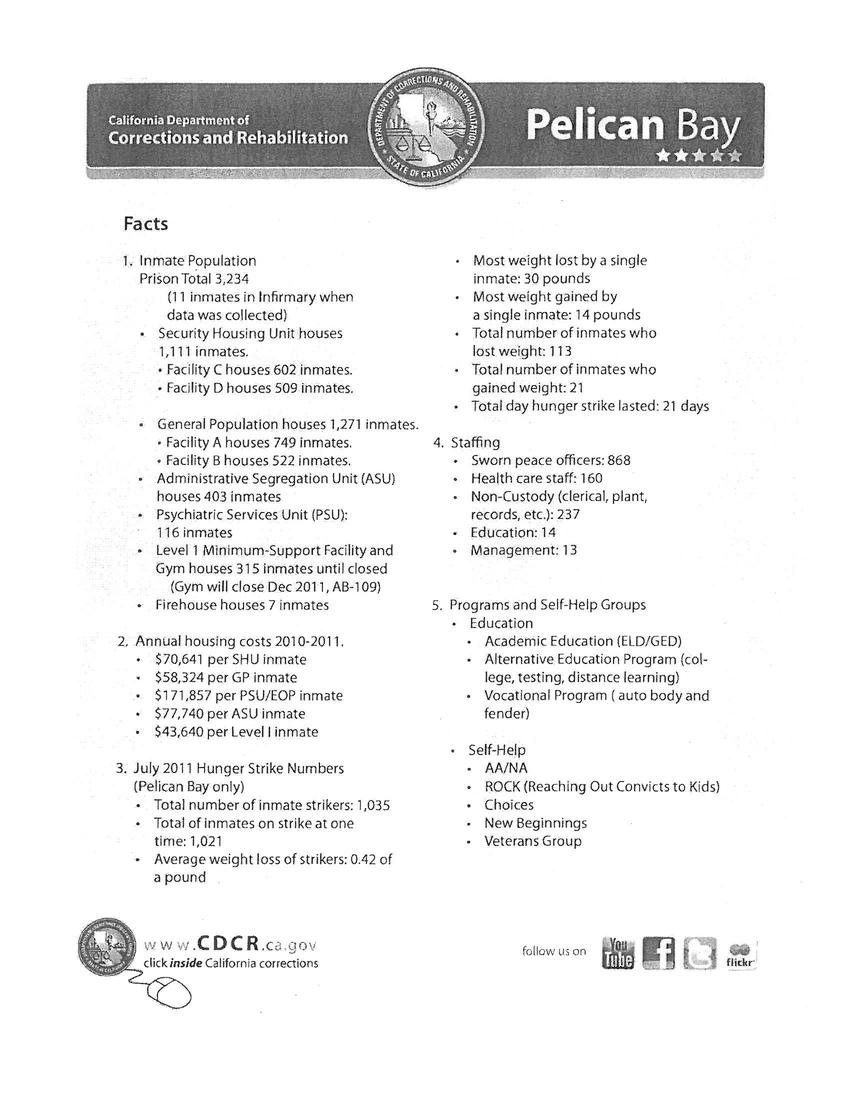 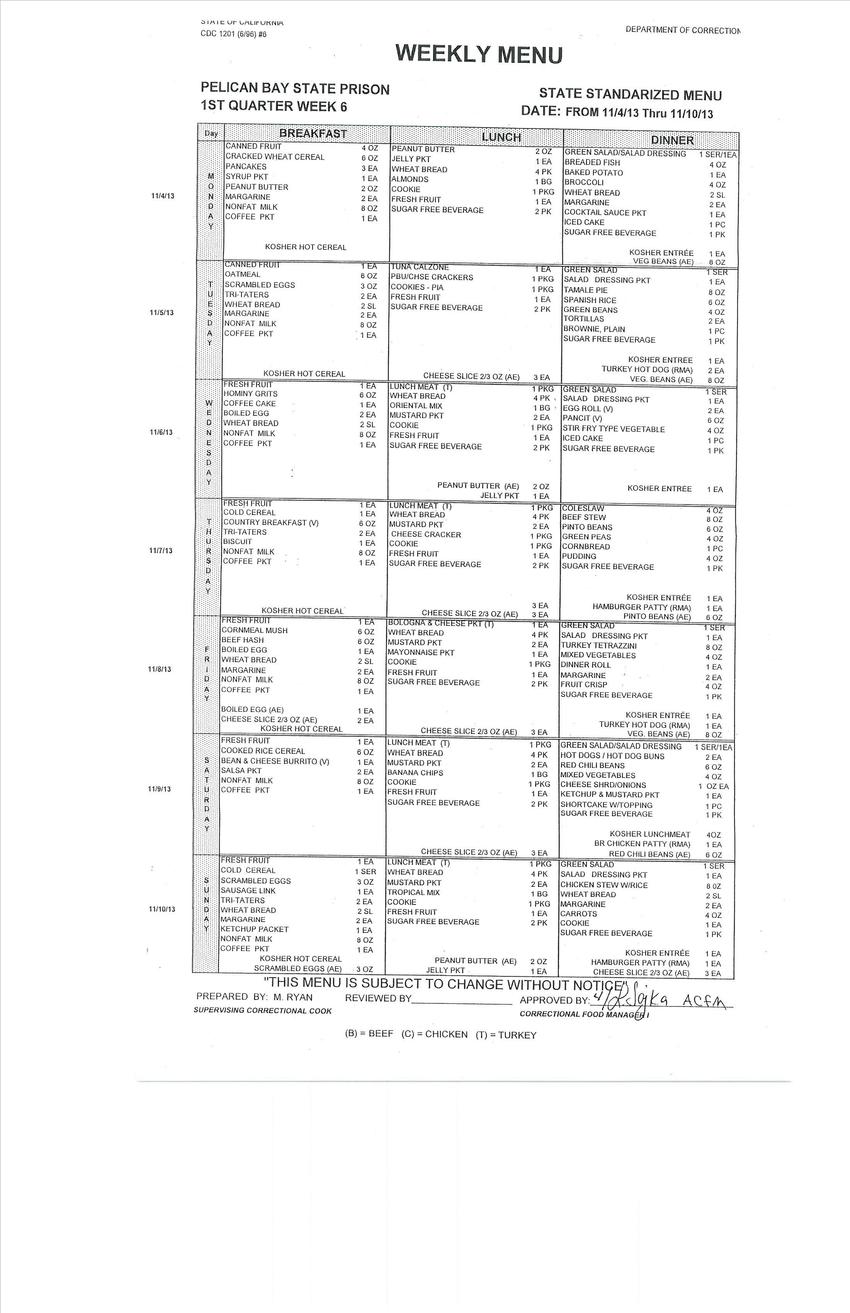 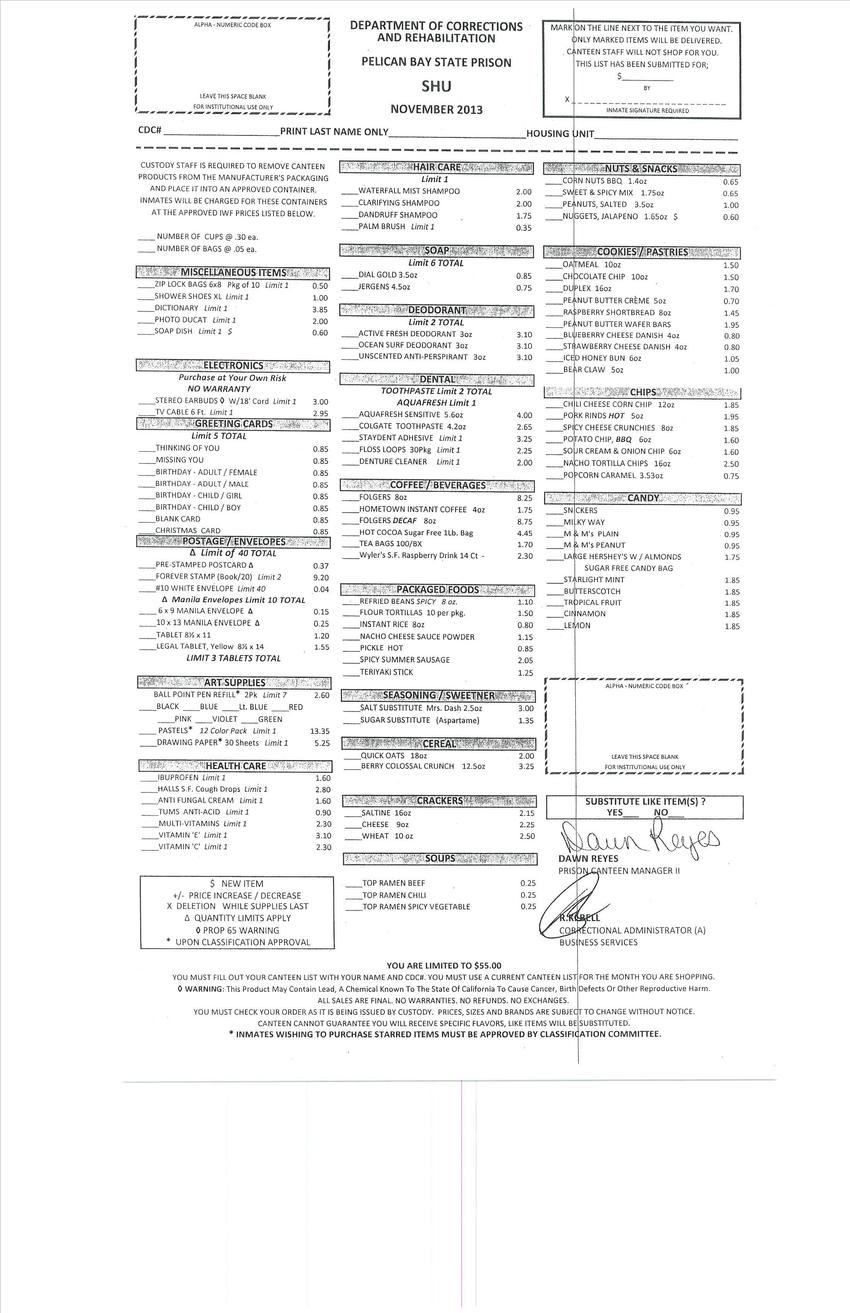 This is a photograph of the outside of the SHU. You could see that it looks a lot like a warehouse or storage containers. The white things on top are the skylights. I heard the other day that the prison officials are going to put a clear skylight window on the ceiling, but what good will that do, it may let in a little light but we can't see nothing. First of all, who wants to stand and look up to the ceiling, and then they don't let us hang out on the tier anyway.

Here is a copy of what the SHU canteen looks like. They have added some items since the first and second hunger strikes, so it was not always like this. It is a little better now. But it still consists of mainly junk food. But they are telling us they will be adding drinking cups and plastic bowls soon. I sure hope so because I'm tired of drinking out of milk cartons and eating out of milk cartons.

Here is what one of our menus look like for SHU. Looks kind of good, huh? Yeah, it's made for the public or inspectors. What is on this menu we only get some of it, they always substitute the good stuff with slop. Man, if we got what this menu says we'd be doing alright. I doubt we'd have much to complain about.

Yesterday they gave us some stuff that was terrible, I don't know what it was. But it looked like chili beans and rice, but was soy meat and some red sauce that was very bad. I messed up putting my rice in it, because after I tasted it, I couldn't eat it.

Another thing is they always seem to run out of food and have to go back and get more trays.

I laugh every time I see a menu, because it looks good on paper, but I know we won't see most of it. Hell, they been giving us crackers for dessert almost every night. Those are lunch crackers.

Located on 275 acres in the northwest corner of California, just 13 miles from the Oregon/California Border, Pelican Bay State Prison (PBSP) is designed to house the State's most serious criminal offenders in a secure, safe and disciplined institutional setting. The prison opened in December 1989 to accommodate a need for a growing population of maximum-security inmates. Pelican Bay has an approximate budget of $180 million, more than 1,292 employees and houses approximately 3,240 inmates.

Half of the prison houses maximum-security inmates in a General Population (GP) setting. The other half houses inmates in the Security Housing Unit (SHU) designed for inmates presenting serious management concerns. The SHU is a modern design for inmates who are difficult-management cases, prison gang members, and violent maximum-security inmates. PBSP operates a 392-bed, Level I Minimum Support Facility, which houses non-violent offenders outside of the secure perimeter of the main institution, and a Firehouse with 7 full-time inmate firefighters.

They can produce all of this paperwork to justify the SHU's - make them seem pretty, important - even necessary.

It's all a whitewash. Just plain nonsense. No one deserves what you are living through.

Did you read the proposal in California - architects will not participate in the construction of SHU prisons? They write that it violates their code of ethics.

I wish there was more that I could do. I've re-blogged some of your comments. (I quoted you directly and linked to your blog). I don't have much influence and only a small readership - but it's what I *can* do - and I intend to do everything that I can.

Someday soon, I hope, this will be over. No one should live in solitary confinement indefinitely. What they've done to you is wrong. 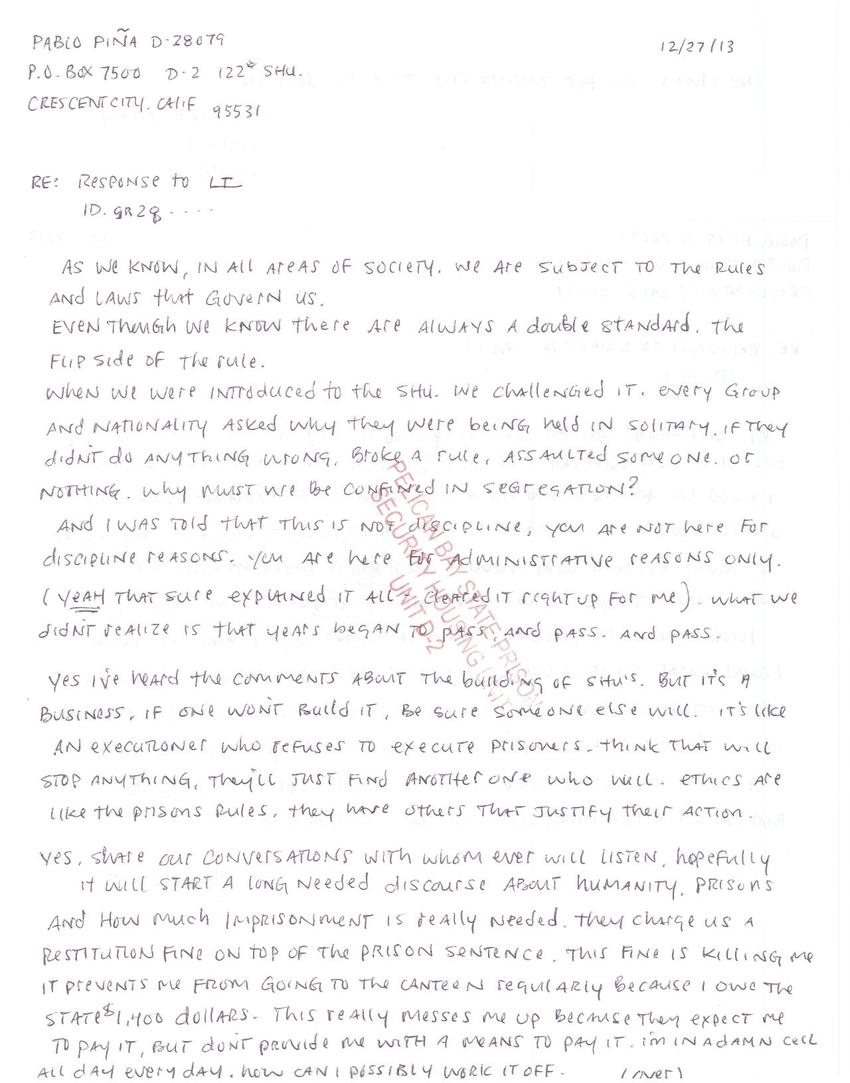 Yes the SHU program is the most crazy stuff in the CDC. I know it will or could drive you insane.
I am just going to say this... people are in the SHU at PB for a reason you have (for whatever reason) programmed out of all the CDC main line programs and are now programmed/classified SHU PB.
You are not in Ad Seg you are above that...the SHU program you are like a level 6 inmate, the worst of the worst....I don't say that... the CDC says that your the worst... and you must be permanent SEG.
You worked hard to get to that level and you are the bad ass of bad asses so enjoy all the respect you have from the CDC.