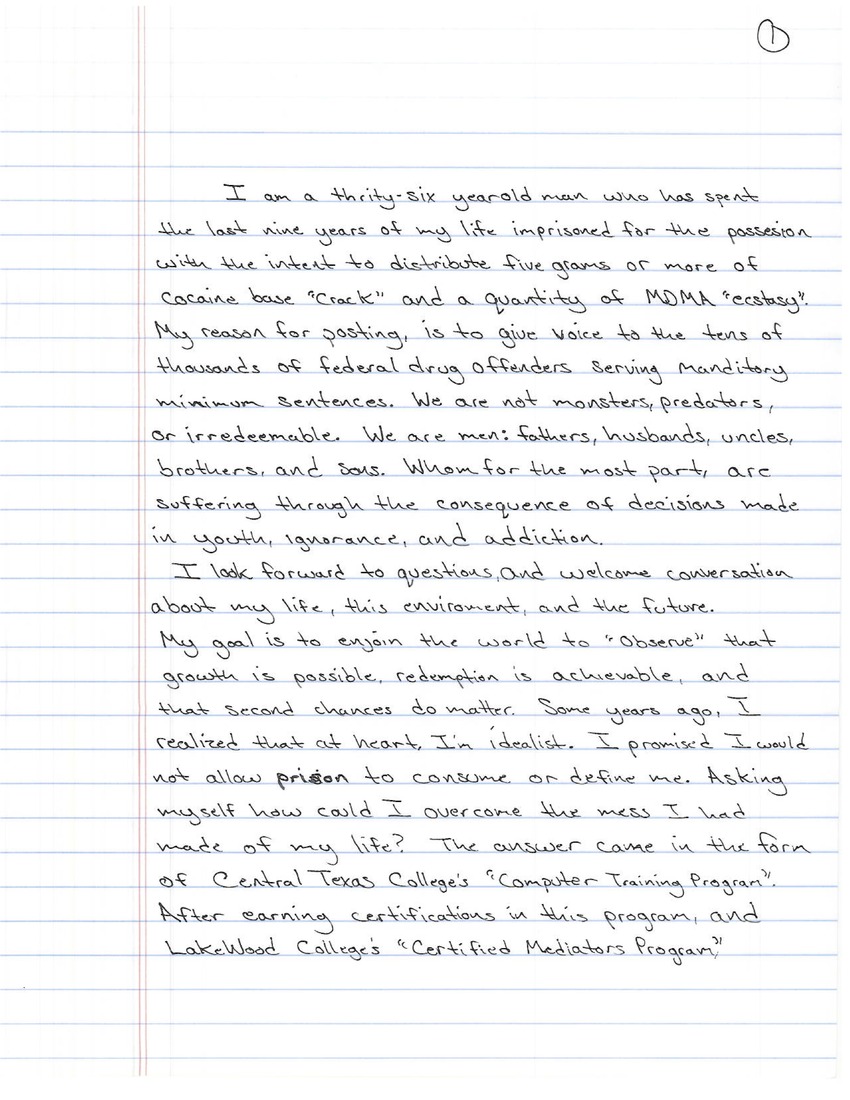 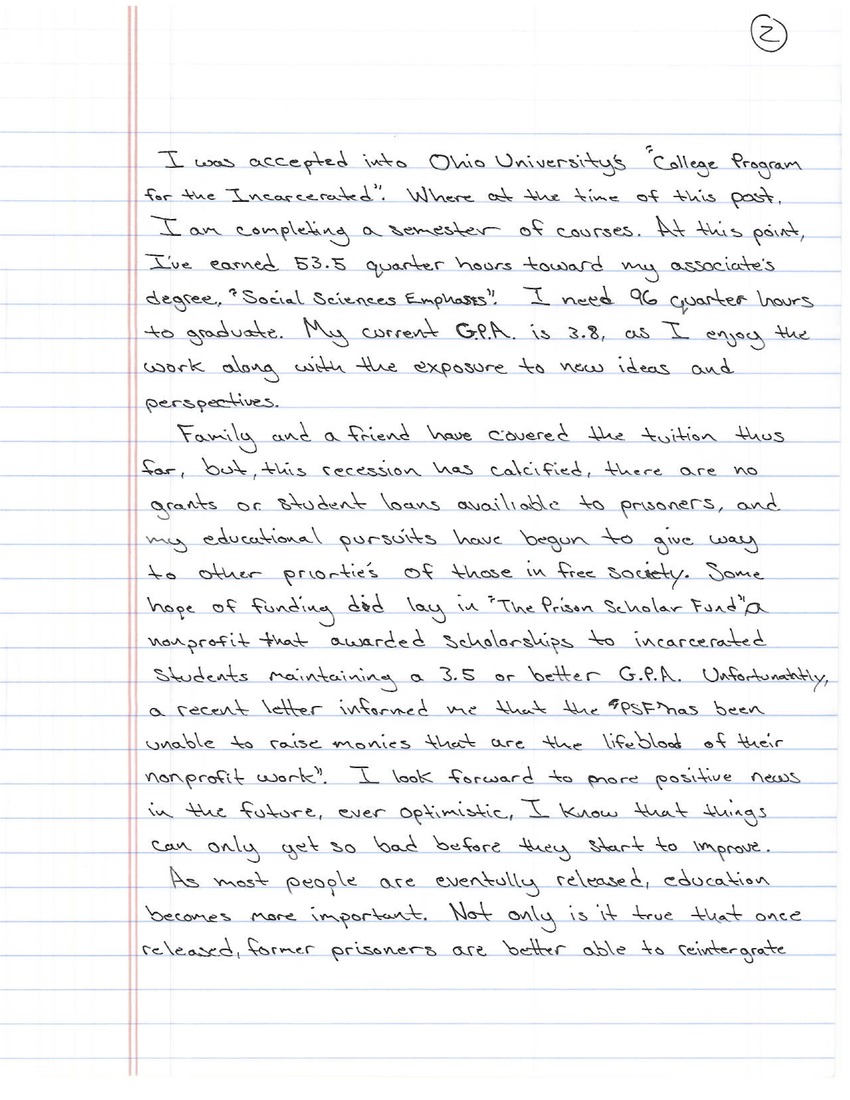 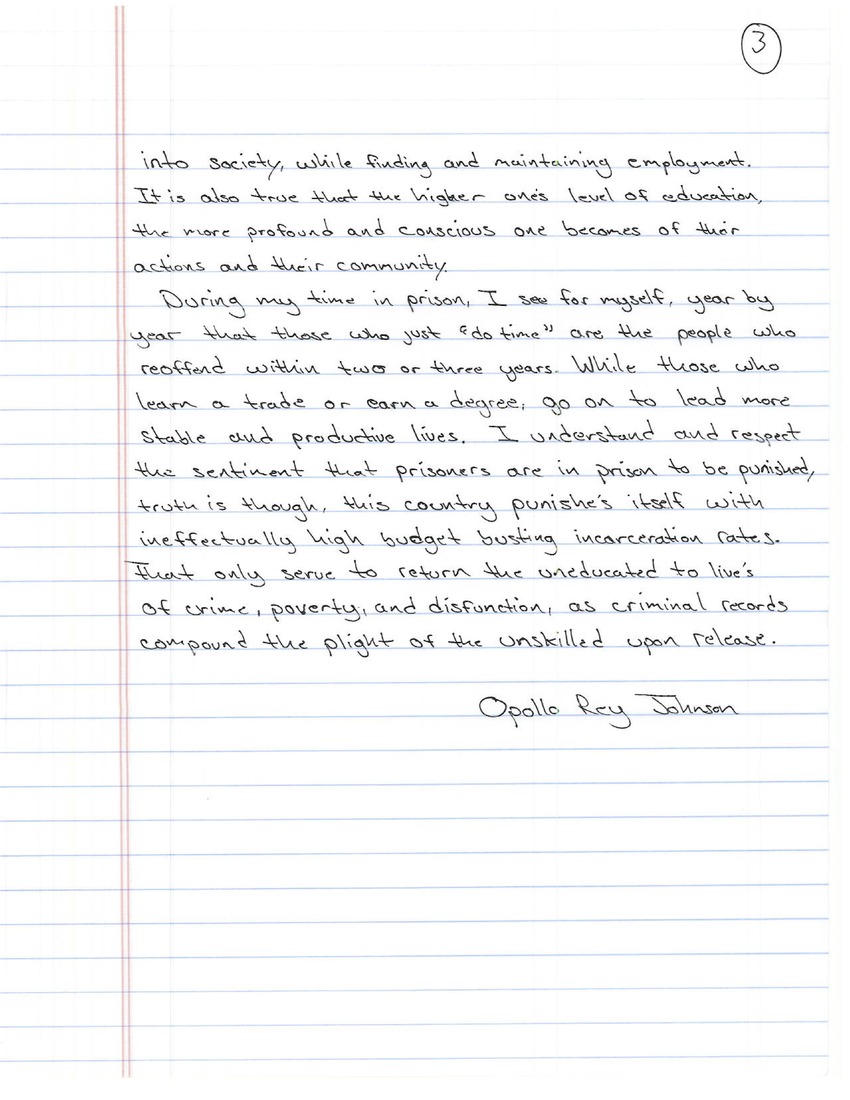 I am a thrity-six year old man who has spent
the last nine years of my life imprisoned for the possesion
with the intent to distribute five grams or more of
cocaine base "crack" and a quantity of MDMA "ecstasy".
My reason for posting, is to give voice to the tens of
thousands of federal drug offenders serving manditory
minimum sentences. We are not monsters, predators,
or irredeemable. We are men: fathers, husbands, uncles
brothers, and sons. Whom for the most part, are
suffering through the consequence of decisions made
in youth, ignorance, and addiction.

I look forward to questions, and welcome conversation
about my life, this environment, and the future.
My goal is to enjoin the world to "observe" that
growth is possible, redemption is achievable, and
that second chances do matter. Some years ago, I
realized that at heart, I'm idealist. I promised I would
not allow prison to consume or define me. Asking
myself how could I overcome the mess I had
made of my life? The answer came in the form
of Central Texas College's "Computer Training Program".
After earning certifications in this program, and
LakeWood College's "Certified Mediators Program,"
I was accepted into Ohio University's "College Program
for the Incarcerated". Where at the time of this post,
I am completing a semester of courses. At this point,
I've earned 53.5 quarter hours toward my associate's
degree, "Social Sciences Emphasis". I need 96 quarter hours
to graduate. My current G.P.A. is 3.8, as I enjoy the
work along with the exposure to new ideas and
perspectives.

Family and a friend have covered the tuition thus
far, but, this recession has calcified, there are no
grants or student loans availiable to prisoners, and
my educational pursuits have begun to give way
to other priortie's of those in free society. Some
hope of funding did lay in "The prison Scholar Fund", a
nonprofit that awarded scholorships to incarcerated
students maintaining a 3.5 or better G.P.A. Unfortunantly,
a recent letter informed me that the "PSF has been
unable to raise monies that are the lifeblood of their
nonprofit work". I look forward to more positive news
in the future, ever optimistic, I know that things
can only get so bad before they start to improve.

As most people are eventually released, education
becomes more important. Not only it is true that once
released, former prisoners are better able to reintergrate
into society, while finding and maintaining employment.
It is also true that the higher one's level of education,
the more profound and conscious one becomes of their
actions and their community.

During my time in prison, I see for myself, year by
year that those who just "do time" are the people who
reoffend within two or three years. While those who
learn a trade or earn a degree, go on to lead more
stable and productive lives. I understand and respect
the sentiment that prisoners are in prison to be punished,
truth is though, this country punishe's itself with
ineffectually high budget busting incarceration rates.
That only serve to return the uneducated to live's
of crime, poverty, and disfunction, as criminal records
compound the plight of the unskilled upon release.

Thank you for your story, Opollo. You are a true example of a self-made man who deserves to be free. The WORLD deserves to have you free. Your tenacity is inspiring and I believe that it will pay off.

Stay strong.
You mentioned Central Texas College's "Computer Training Program." I'm curious what kind of computer equipment and services and training are available to you. How far can you take this interest, if you so desire? Can you go in publishing directions, or software programming directions?

The internet is a resource as well as a stage, so to speak. So in addition to expressing your views, which is great for us, you can also ask technical questions, which may help in your studies.

Just an idea. It would be good if blogging was a two-way street of information and help.

Thanks for your excellent words, Oppolo. I am a writer, and I would be interested in corresponding with you. Is it possible for you to post an address where you can receive mail?
Chrishmael