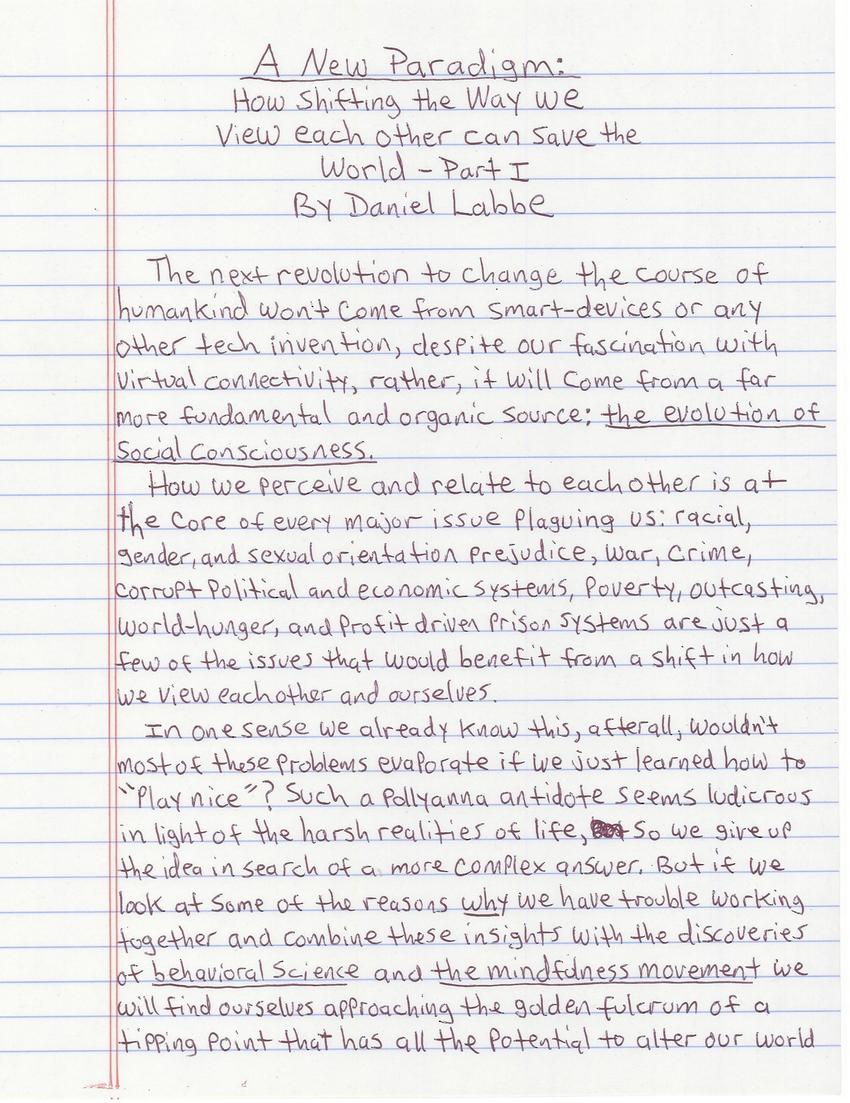 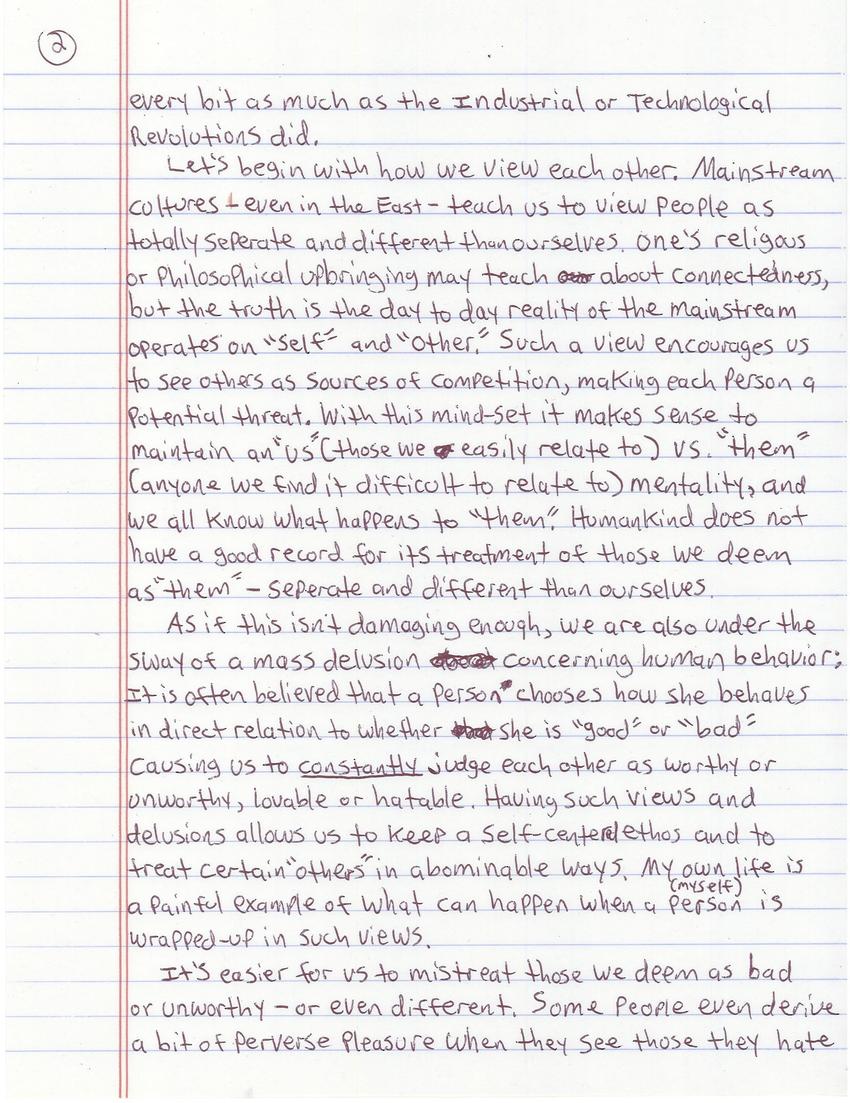 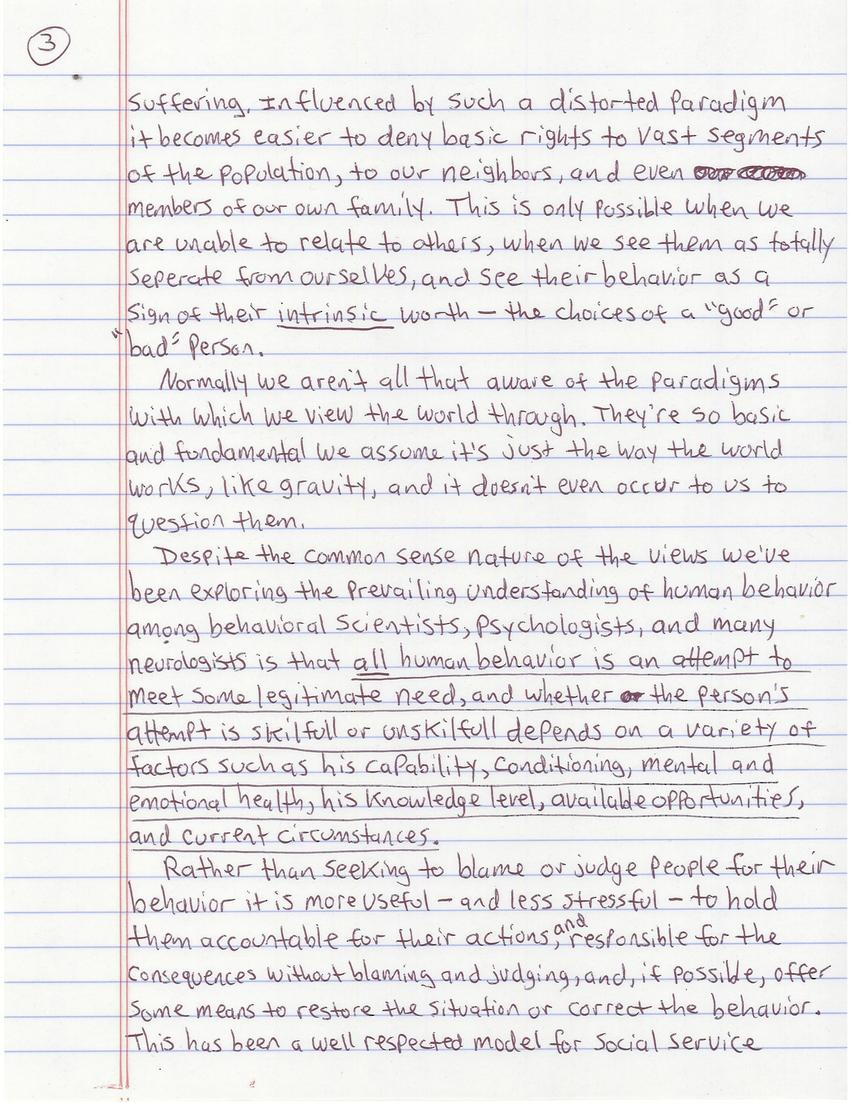 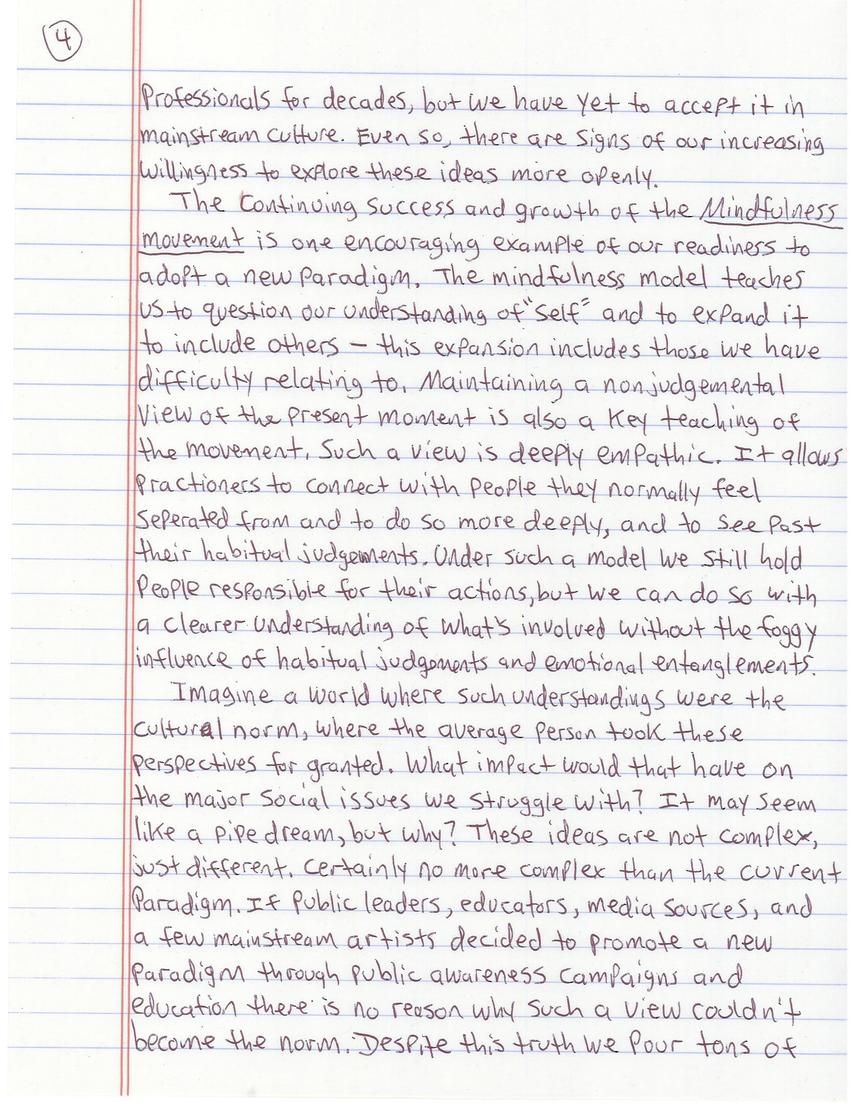 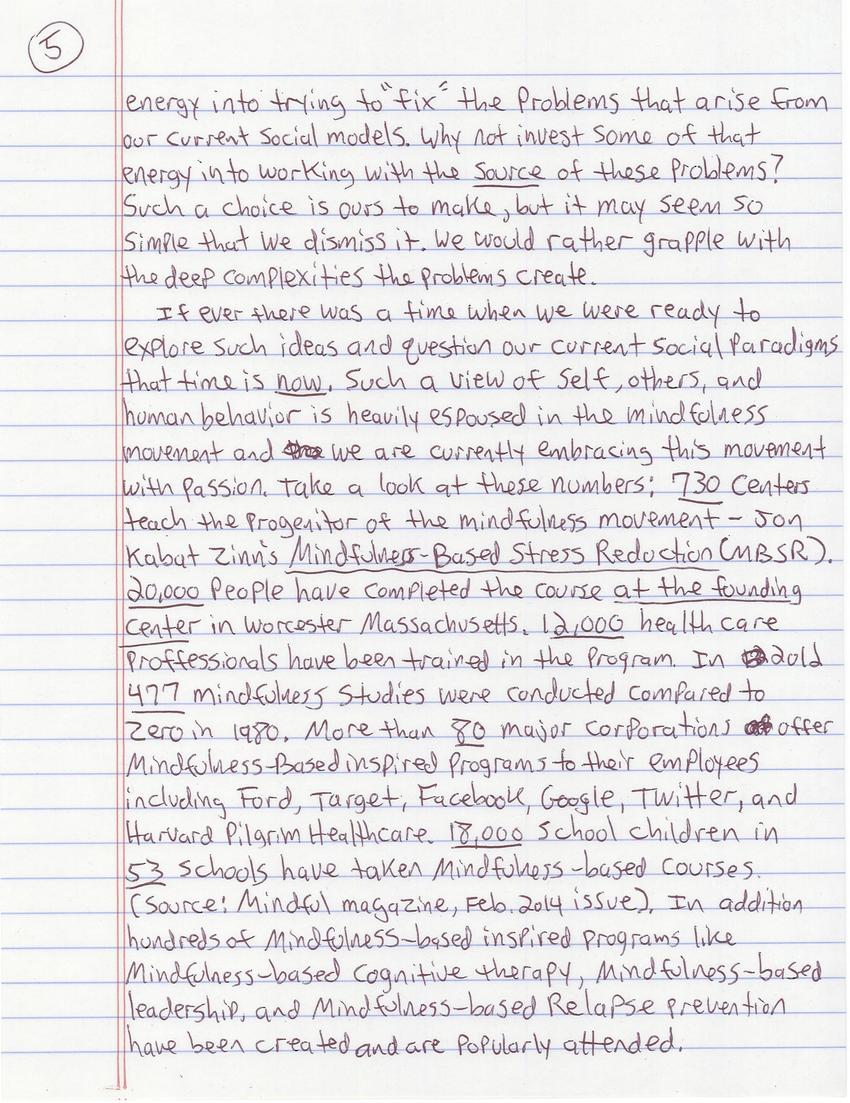 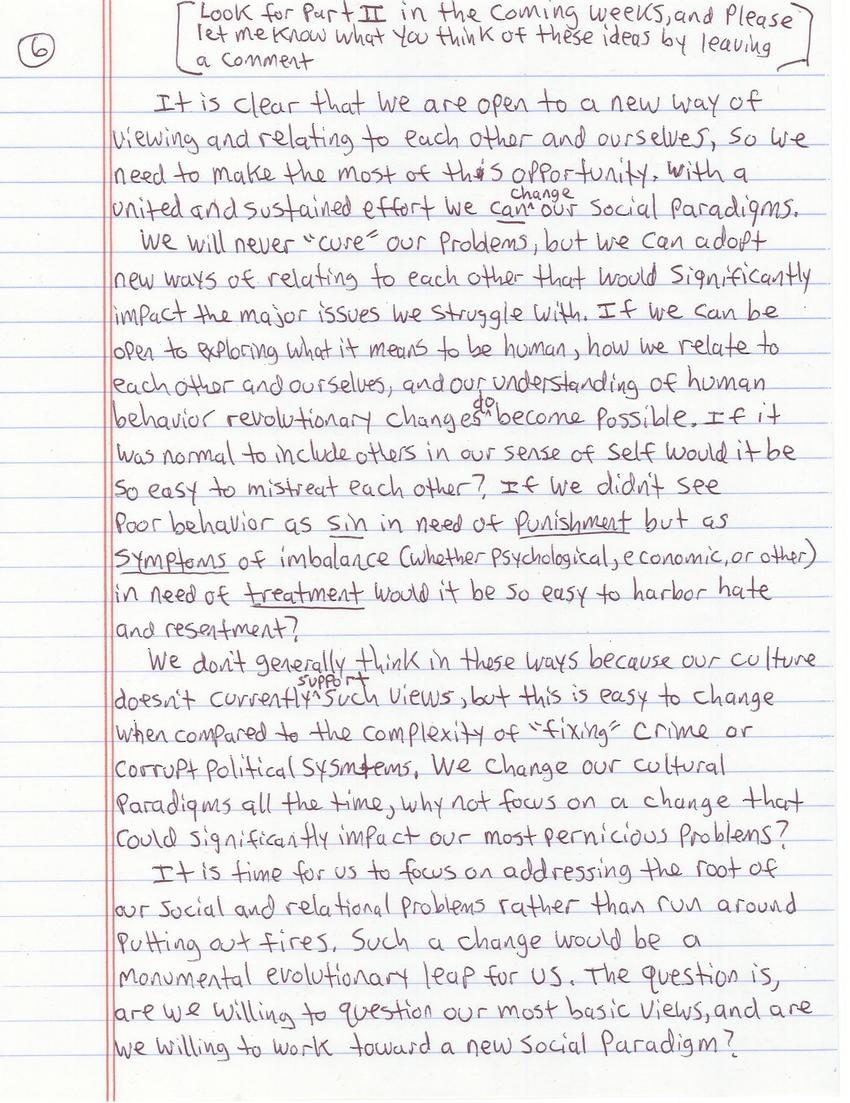 A New Paradigm:
How Shifting the Way We
View Each Other Can Save The
World - Part I
By Daniel Labbe

The next revolution to change the course of humankind won't come from the smart-devices or any other tech invention, despite our fascination with virtual connectivity, rather, it will come from a far more fundamental and organic source: the evolution of social consciousness.

How we perceive and relate to each other is at the core of every major issue plaguing us: racial, gender, and sexual orientation, prejudice, war, crime, corrupt political and economic systems, poverty, out-casting, world hunger, and profit driven prison systems are just a few of the issues that would benefit from a shift in how we view each other and ourselves.

In one sense we already know this, after all, wouldn't most of these problems evaporate if we just learned how to "play nice"? Such a pollyanna antidote seems ludicrous in light of the harsh realities of life. So we give up the idea in search of a more complex answer. But if we look at some of the reasons why we have trouble working together and combine these insights with the discoveries of behavioral science and the mindfullness movement we will find ourselves approaching the golden fulcrum of a tipping point that has all the potential to alter our world every bit as much as the Industrial or Technological Revolutions did.

Let's begin with how we view each other. Mainstream cultures - even in the East - teach us to view people as totally separate and different than ourselves. One's religious or philosophical upbringing may teach about connectedness, but the truth is the day to day reality of the mainstream operates on "self" and "other". Such a view encourages us to see others as sources of competition, making each persona a potential threat. With this mind-set it makes sense to maintain an "us" (those we easily relate to) vs. "them" (anyone we find it difficult to relate to) mentality, and we all know what happens to "them". Humankind does not have a good record for its treatment of those we deem as "them" - separate and different than ourselves.

As if this isn't damaging enough, we are also under the sway of a mass delusion concerning human behavior; It is often believed that a person chooses how she behaves in direct relation to whether she is "good" or "bad" causing us to constantly judge each other as worthy or unworthy, loveable or hateable. Having such views and delusions allows us to keep a self-centered ethos and to treat certain "others" in abominable ways. My own life is a painful example of what can happen when a person (myself) is wrapped up in such views.

It's easier for us to mistreat those we deem as bad or unworthy - or even different. Some people even derive a bit of perverse pleasure when they see those they hate suffering. Influenced by such a distorted paradigm it becomes easier to deny basic rights to vast segments of the population, to our neighbors, and even members of our own family. This is only possible when we are unable to relate to others, when we see them as totally separate from ourselves, and see their behaviour as a sign of their intrinsic worth - the choices of a "good" or "bad" person.

Normally we aren't all that aware of the paradigms with which we view the world through. They're so basic and fundamental we assume it's just the way the world works, like gravity, and it doesn't even occur to us to question them.

Despite the common sense nature of the views we've been exploring, the prevailing understanding of human behavior among behavioral scientists, psychologists and many neurologists is that all human behavior is an attempt to meet some legitimate need, and whether the person's attempt is skilful or unskilful depends on a variety of factors such as his capability, conditioning, mental and emotional health, his knowledge level, available opportunities and current circumstances.

Rather than seeking to blame or judge people for their behavior it is more useful - and less stressful - to hold them accountable for their actions and responsible for the consequences without blaming and judging, and, if possible, offer some means to restore the situation or correct the behavior. This has been a well respected model for social service professionals for decades, but we have yet to accept it in mainstream culture. Even so, there are signs of our increasing willingness to explore these ideas more openly.

The continuing success and growth of the Mindfulness Movement is one encouraging example of our readiness to adopt a new paradigm. The Mindfulness Model teaches us to questions our understanding of "self" and to expand it to include others - this expansion includes those we have difficulty realting to. Maintaining a non-judgmental view of the present moment is also a key teaching of the movement. Such a view is deeply empathic. It allows practitioners to connect with people they normally feel separated from and to do so more deeply, and to see past their habitual judgements. Under such a model we still hold people responsible for their actions, but we can do so with a clearer understanding of what's involved without the foggy influence of habitual judgments and emotional entanglements.

Imagine a world where such understandings were the cultural norm, where the average person took these perspectives for granted. What impact would that have on the major social issues we struggle with? It may seem like a pipe dream, but why? These ideas are not complex, just different. Certainly no more complex that the current paradigm. If public leaders, educators, media sources, and a few mainstream artists decided to promote a new paradigm through public awareness campaigns and education there is no reason why such a view couldn't become the norm. Despite this truth, we pour tons of energy into trying to "fix" the problems that arise from our current social models. Why not invest some of that energy into working with the source of these problems? Such a choice is ours to make, but it may seem so simple that we dismiss it. We would rather grapple with the deep complexities the problems create.

(Look for Part II in the coming weeks, and please let me know what you think of these ideas by leaving a comment).

It is clear that we are open to a new way of viewing and relating to each other and ourselves, so we need to make the most of this opportunity. With a united and sustained effort we can change our social paradigms.

We will never "cure" our problems, but we can adopt new ways of relating to each other that would significantly impact the major issues we struggle with. If we can be open to exploring what it means to be human, how we related to each other and ourselves, and our understanding of human behavior revolutionary changes do become possible. If it was normal to include others in our sense of self would it be so easy to mistreat each other? If we didn't see poor behaviour as sin in need of punishment but as symptoms of imbalance (whether psychological, economic, or other), in need of treatment would it be so easy to harbor hate and resentment?

We don't generally think in these ways because our culture doesn't currently support such views, but this is easy to change when compared to the complexity of 'fixing' crime or corrupt political systems. We change our cultural paradigms all the time, why not focus on a change that could significantly impact our most pernicious problems?

It is time for us to focus on addressing the root of our social and relational problems rather than run around putting out fires. Such a change would be a monumental evolutionary leap for us. The question is, are we willing to question our most basic views, and are we willing to work toward a new social paradigm?